Doctors can rescue us from non-medical situations as well.

Doctors are a very important part of our society. I mean, apples do give them a tough time but that’s a debate for another day. Doctors study medical sciences and devote a lot of their years to become specialists in various diseases and spend the rest of their lives curing and providing the best possible remedies to the human population. And in today’s case, some justice as well. I assume you all know what sick leaves are. They are paid leaves, as permitted by the law, that an employee can request to look after their health and return to fitness before rejoining. Simple, right?

Not long ago, a reddit user started feeling a little ill during their day job. The symptoms were pointing towards a potential flu. So just like any other person would do, this person applied for sick leave for a couple of days to look after themselves. The manager however was not having any of it (weird) and wanted this employee to get a note from the doctor if they want their sick leaves approved. And luckily enough, the doctor advised this Redditor to take a rest of at least 2 weeks instead of the 2 days they thought they would be needing. The manager also got given a disciplinary hearing to attend, courtesy of the efforts of a duty manager.

To know what happened, scroll down below to read the experience as written by the Reddit user u/kathjoy. 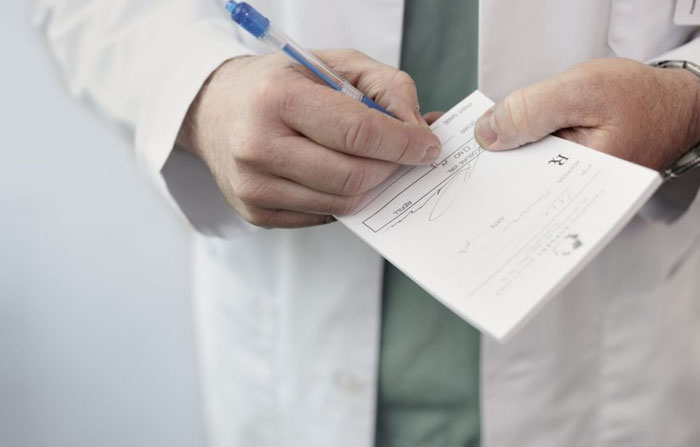 Well, this is going to be interesting… 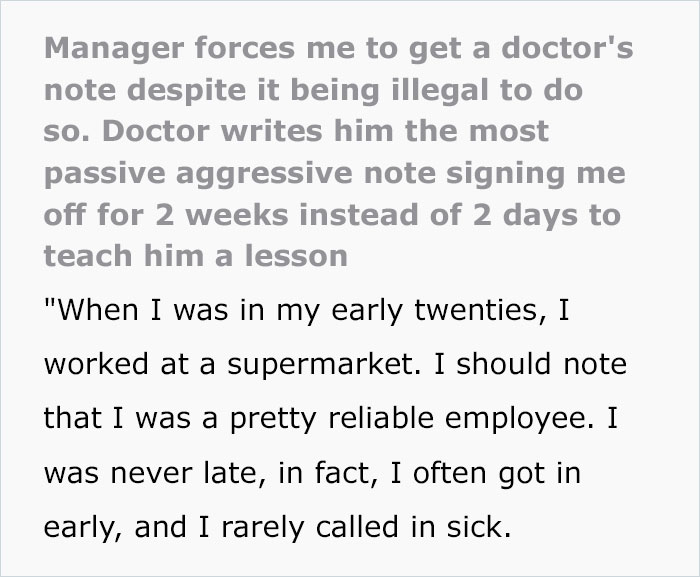 Should’ve left as soon as you left something.. 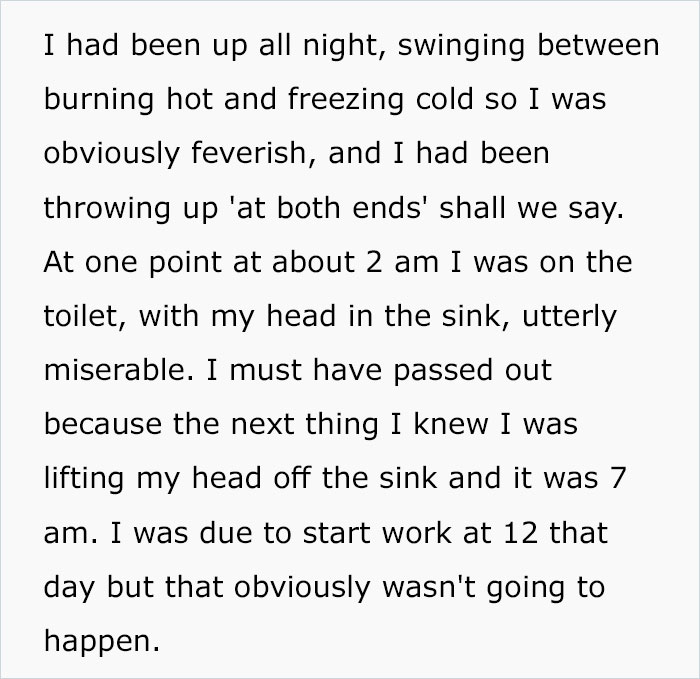 For some reason, Steve is already on my nerves. 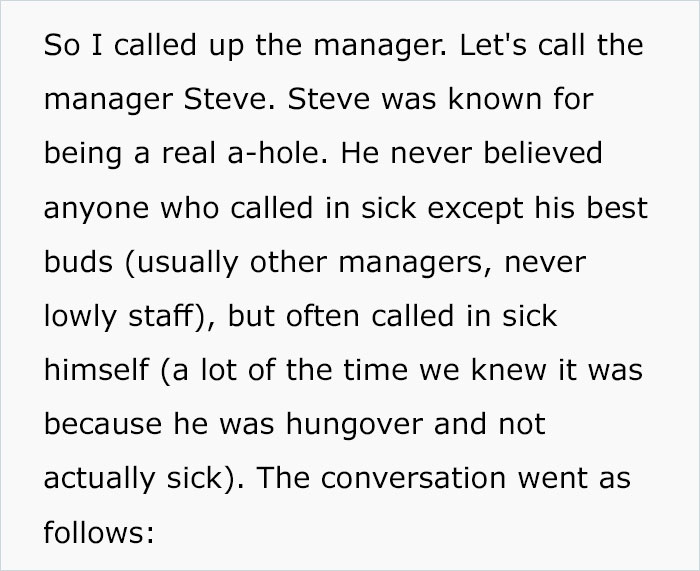 So he’s that big of an a-hole… 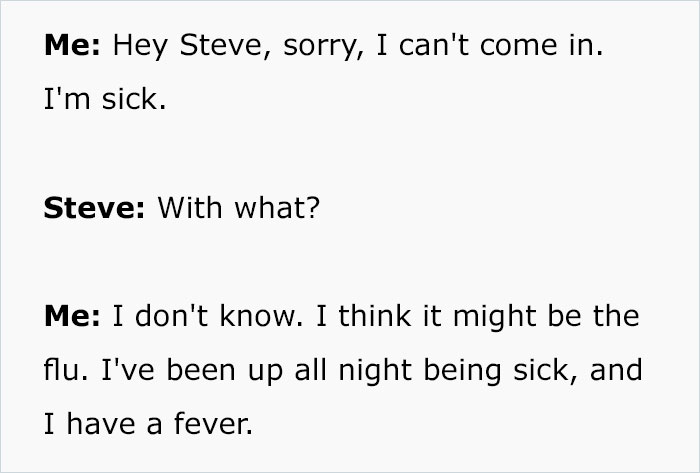 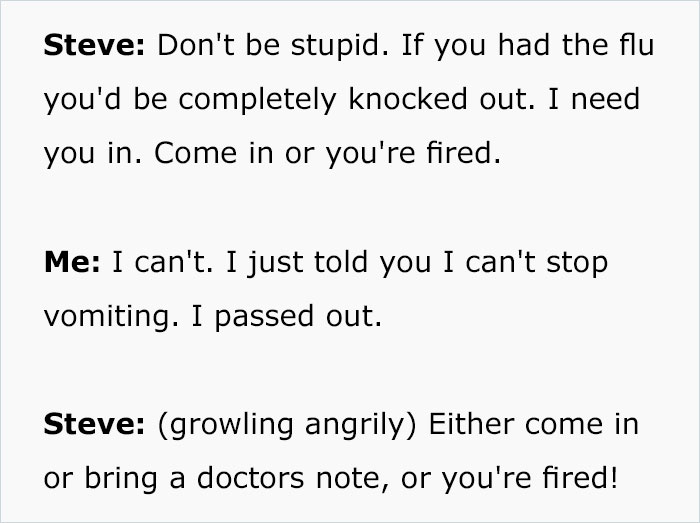 Pretty sure that loser is aware of this information as well. 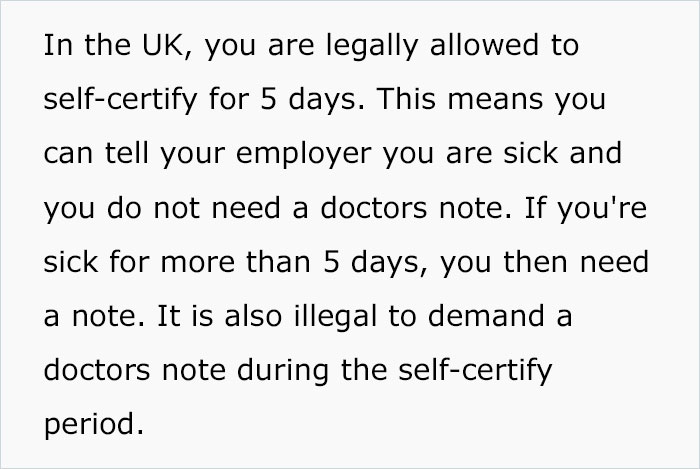 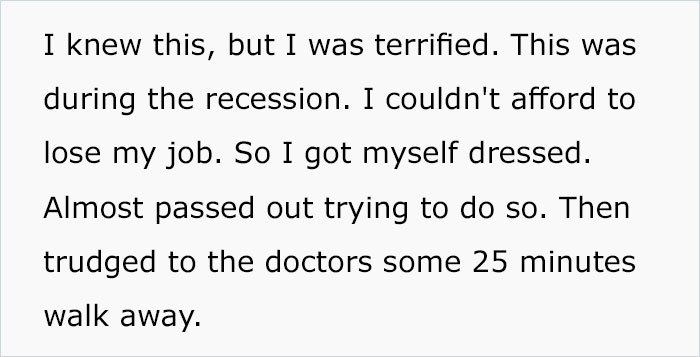 The doctor was furious but she didn’t know what made this person come all this way in such bad condition. 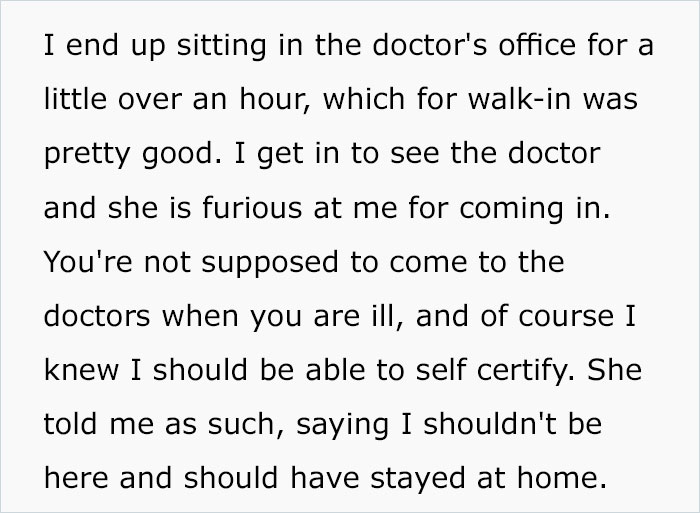 The doctor is onto something… 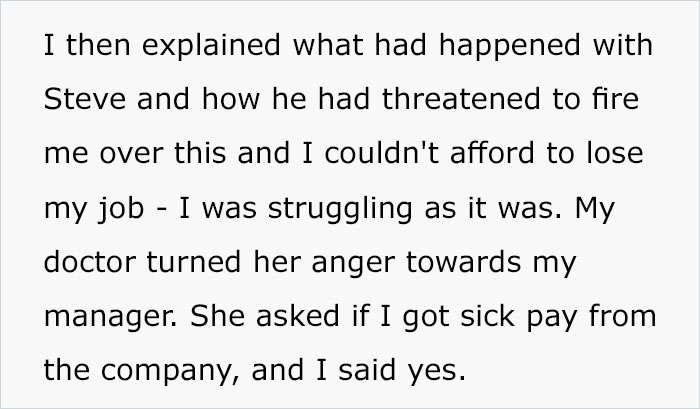 She went all out because she just couldn’t bear all the injustice. 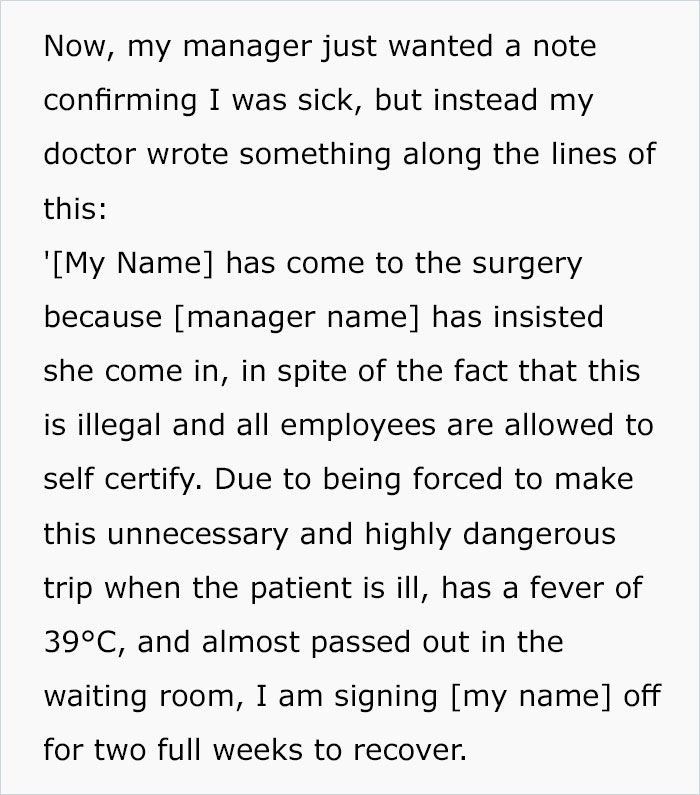 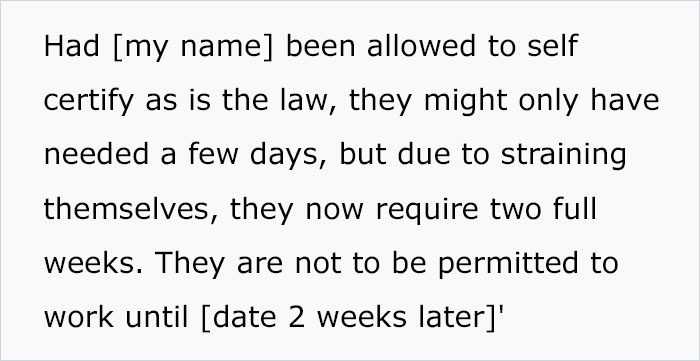 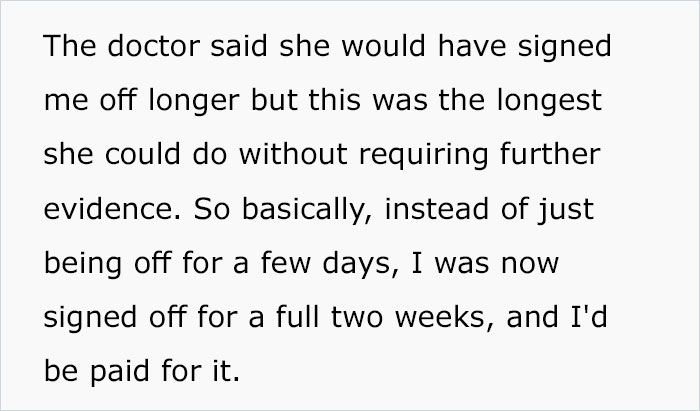 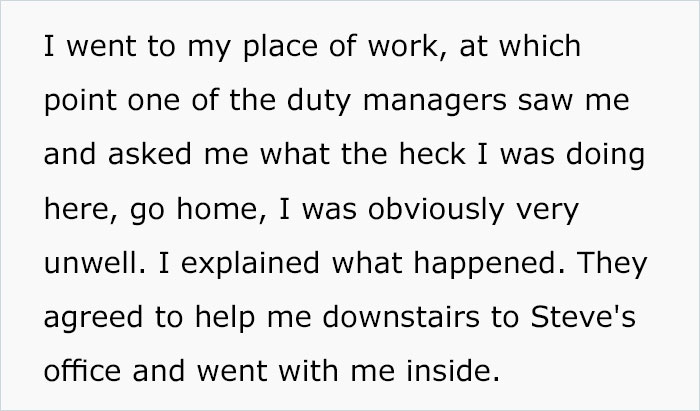 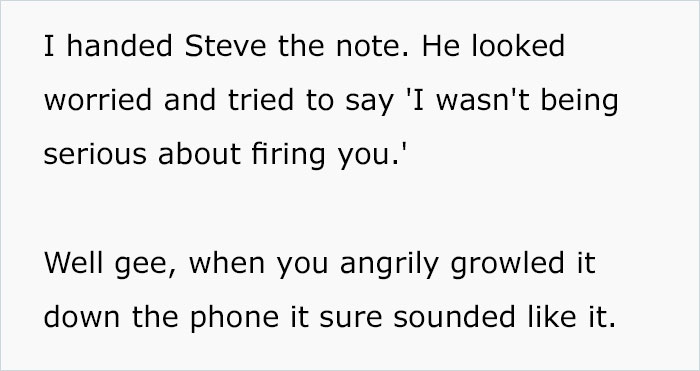 I like the duty manager. Steve? It’s still a no from me. 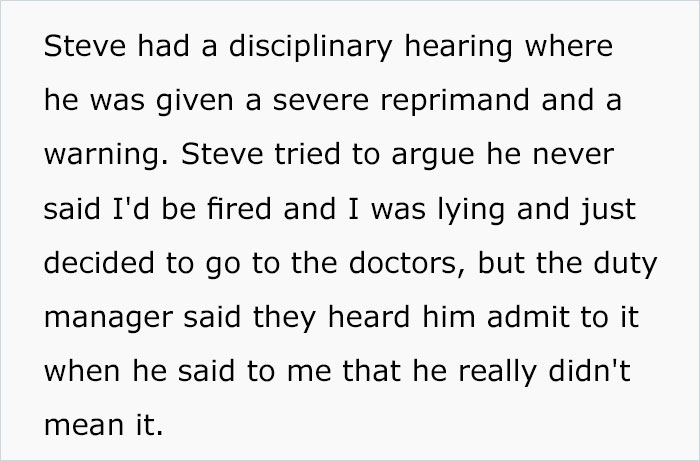 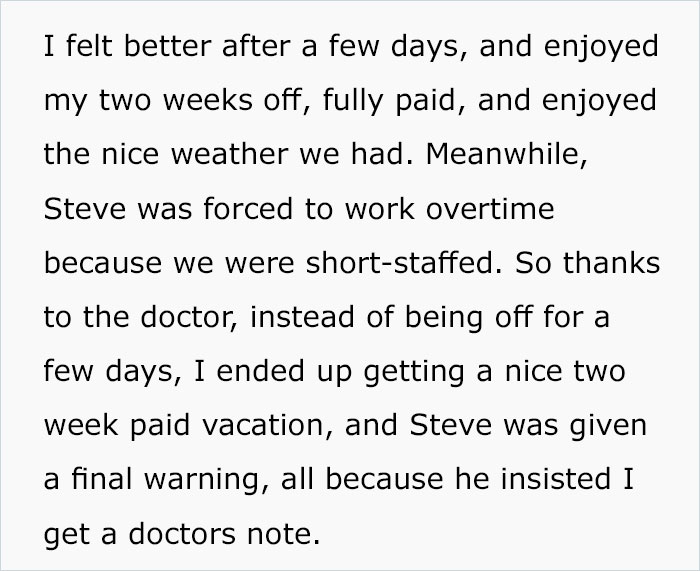 One should never try to pick a bone with anyone just because they are rank above the other person. Even though Steve knew that his employee was under no law bring in a doctors note and that they could self-certify themselves, he still did all of that and eventually had to pay.

In an interview with the Bored Panda, u/kathjoy said, “He never believed everyone about anything, and would often talk down to us and tell us how to do our job even though he didn’t know anything about the department. You could probably walk up to him holding your own head in your hand and he’d probably still not believe you needed to go to the doctor. Nobody liked Steve because he just didn’t seem to care about anyone but himself. He hid in his office most of the time and even when we put out calls for him because we needed him for a complaint, you’d usually have to call several times and he’d take his sweet time getting to you. So I guess you could say there was no love lost between us.”

When asked about how the Redditor felt regarding what the doctor did for them. They said, “I was just expecting the doctor to confirm I was ill. I didn’t expect her to do what she did and I’m forever grateful.”

And when Bored Panda asked regarding how the environment has been for them at work after this whole situation. Here’s what they had to say:

“After the incident, Steve was kind of weird towards me, sometimes he’d be a fake sickly-sweet nice to me like ‘Hey, it’s [you], my favorite worker’ or ‘I’m so glad you’re feeling better and other times he would blank me out and ignore or avoid me. But he never tried to force me to come in when I called in sick, so that was a plus.”

The whole problem here is that it is human nature that we tend to conform to authority. Even though the authority is wrong or doing something illegal, acts like groupthink end up making the employee conform to their norms because no one likes to standalone and the authority has that power to kick them out. So it all sadly goes against the employee, every time. According to my knowledge and the law, you don’t need to obtain a doctor’s note if you’re sick for 7 or less than 7 days. The employee can just go home and they will get paid leaves for the time period they are home. If the sickness goes beyond 7 days, which was definitely not the case for u/kathjoy, then you have to retrieve a doctor’s note. But the sad part is, power has always brought up evil and the evil is yet to die. This isn’t a rare singular case. All of this that happened with this Redditor, happens all over the world. We definitely need more people like that doctor and that duty manager who believes that there should be justice all around. And ranks and authority should not bother anyone’s confidence.

The internet had a lot to say when u/kathjoy shared her story on Reddit.

They absolutely loved how it all turned out. 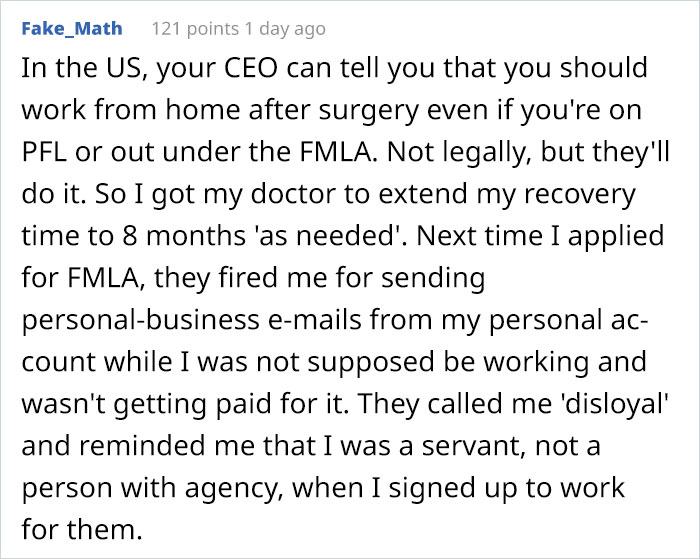 We hope the manager learned his lesson and we wish the Redditor good health.

I hope you guys enjoyed it. Have you ever worked for a stubborn manager? Feel free to share how did that turn out for you. We need to make sure justice prevails every time. And we’ve got a long journey ahead of us.