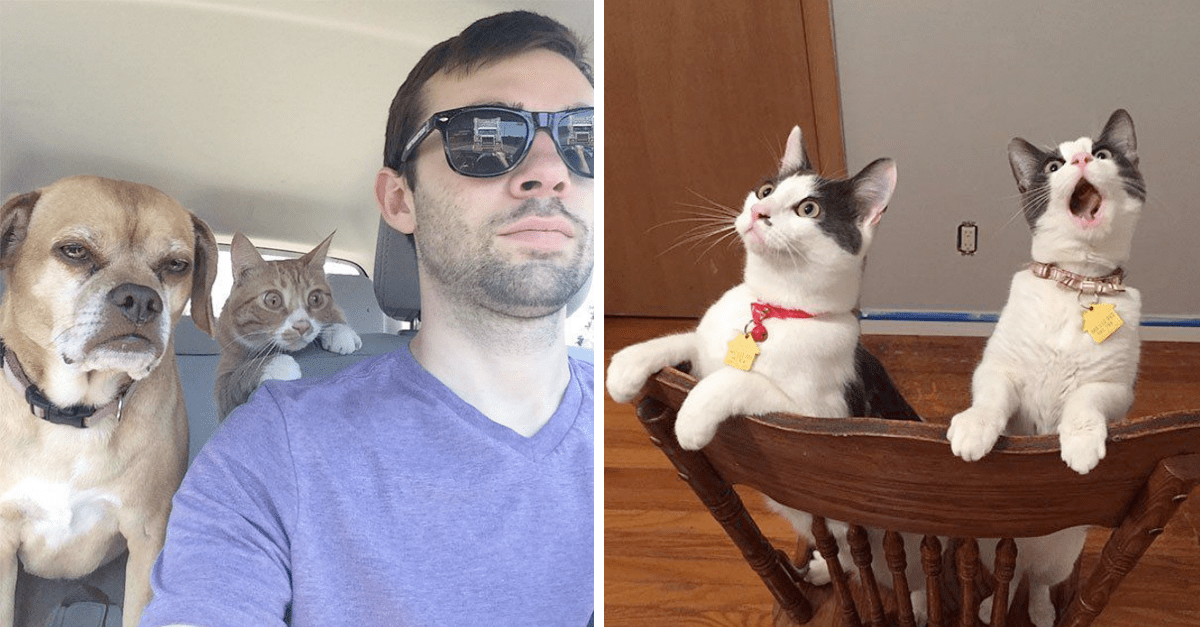 Our four-legged feline friends are the biggest drama queens in the history of animals. From being irresistibly adorable with their wide-open eyes to their resting judgemental faces or “I don’t care” expressions, these balls of fur are very expressive of their emotions. Not only are they expressive but they are overly dramatic as well. They put on a show with their appearance and constantly crave attention. A lot of attention. Naturally, they desire to be the centre of their human’s world. They enjoy obedience (Humans obeying cats). There is no vice versa. No doubt they do become the centre of a cat owner’s world, after all, who can ignore such attention-drawing actions.

Cats are best at what they do. They are some of the greatest performers of all time. Their acting skills are nothing less than Academy winning big Hollywood names. Here are some of the hilarious yet outstanding reactions of cats that deserve an oscar for sure.

Oh! He’s got a gig this Saturday night. Just rehearsing.

This cat has surely seen The Final Destination.

Just dropped something but too lazy to get it.

“Get back here and let me love you!”

Cats can be pretty romantic sometimes.

This one found out he’s being filmed.

“How dare video tape me without my consent?”

This one’s a lead in the next ninja assassin movie.

He’s got some skills.

“Hooman, what have I done to deserve such a treatment?!”

“Think quick! Before they give you a bath… Aha! Let’s execute plan ‘B’.” *Passes out*

What a drama queen.

This one just got rescued.

Peacefully taking a stroll in the neighborhood and suddenly running into an old “friend.” *Hisses*

Fun fact: Cats fluff their tails for various reasons, but most often when they are scared to the core, super annoyed, angry or very playful. In the case above, he’s annoyed.

This cat is taking a dramatic fall off the couch.

It will take a few minutes for his consciousness to return from an interrupted nap.

He can go scratchy and bleedy anytime now.

He’s hired as the new Kapellmeister at the Sydney Opera House.

“Trust me I can make good music.”

This cat seems to be a part time Ballerina.

This one’s been working out.

Ever wonder why cats hate water so much? Yeah, we thought that too. However, after some research, we found that domestic cats have small hair that causes the water to touch their skin directly. As a result, they feel cold. Now it’s understandably why.

Seems like this catto’s neighbors are enjoying some grilled fish for Lunch.

Seems like he saw his owner from a distance and slipped.

This one judges you for no reason as you enjoy your meal.

She’s probably plotting your murder for not feeding her first.

This one’s practicing for his movie debut as a convict in the court room.

When you’re high on catnip and things start levitating around the house. * Dramatic cat noises*

“Yes, yes. I agree with the road trip. Only if I can sit in the passenger seat.” *A few moments later* “I never should’ve trusted you.”

Looks like the owner got them their favorite treat.

Cats have a way with things. It’s like they know what they want and when they want. It’s an inborn talent not many animals possess. Just look at those eyes. JUST LOOK AT THEM. This is when they want you to obey them. They want something done and they know how to make you do that. They know your weakness. After all, they’ve been watching you all day, judging you from a distance.

“You said I was your only child!” *Hisses Aggressively*

When your cat is being salty.

The moment you realize you’re not the youngest child anymore.

*Heard footsteps and woke up* “Hooman, am I a joke to you?!”

Let’s just stop for a moment and adore how chonky this one is. *melts*

You ignored her once upon a time…

You are being watched…

*All hail The Majestic Queen!* “Hooman, Give me all your attention.”

Looks like someone forgot their cat outside in the rain. Now, the Catto is plotting revenge.

If you enjoyed these photos and laughed just as we did, then let us know in the comments below and also share these with your friends.