August 26th is marked as National Dog Day and we think this is a brilliant coined event that should definitely be celebrated in one way or another.

The Museum of English Rural Life came up with a brilliantly hilarious idea to celebrate through dog posts on Twitter. The MERL with their mission of exploring the “English countryside, its history, and its people” decided to ask people to submit photos of their goofy dogs who were bred for a particular purpose but failed miserably at fulfilling that calling.

People quickly rose to the challenge and submitted entries of their dog breeds who turned out to be not much more than couch potatoes, lazy and hilarious. To give you a better understanding of the challenge, the Labrador Retriever is a dog bred for the purpose of catching hunted game, the Bernese Mountain dog was meant to guard, the Foxhound to hunt down foxes. People put a lot of effort into carefully breeding these doggos for a particular purpose but despite their diligent efforts, these doggos turned out to be something completely different to what was expected!

The MERL challenge turned out to be absolutely hilarious and produced some comical dog memes that are sure to make your day brighter! So let’s start scrolling for you to get a better idea of what this is all about.

The official post calling for entries to the challenge! 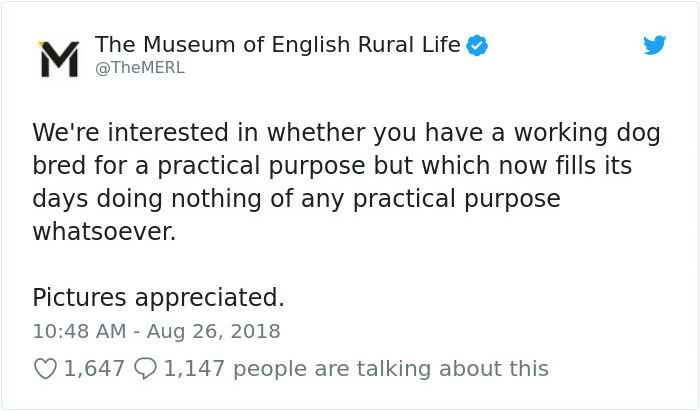 3. Napping is indeed an extreme sport

5. Will do anything for the sausages

6. In his defence, a clock can be loud and annoying

9. That’s quite the stretch

10. Warm blankets are heaven for humans and doggos alike

16. Really gets himself into odd spots

17. Has a built-in bathing suit

20. Naps and snobbery at their best

These beautiful doggos may not have command over their skills and in-bred abilities, but they definitely have a hold on their owners’ hearts and ours too! Sure, they may be a little spoilt but they’re just so cute and gentle that we can’t help but feel so much love for their gentle and loving personalities. We’ve got way more where these have come from, so scroll on for now!

Some of these doggos were meant to be big, brutal, and menacing while protecting their owners, but they just can’t help their mushy personalities and the unconditional love they shower on their humans. They just want to chill out, crack open a cold one with the other doggos, and nap their day away. We can’t really blame them now, can we? They just happen to be more docile than they were intended!

27. Hunting lions in his dreams

28. Snooze time is the best time

30. It’s important to stop and smell the flowers

35. Not meant for the water

36. He knows how to be a floof though

37. The friendlier, the better!

43. He has an explorative personality

44. Chilling on the beach for now

45. What a treat for the mailman

47. He likes to give and get company!

50. His mighty legacy as a floofball

These doggos clearly have a different idea of how they want to live their lives, and we can’t say we blame them. These lazy boys who love to nap, eat, and play with their hoomans have a more relaxed idea of the life they want to live and their humans have accepted them exactly the way they are! It’s hilarious how differently these dogs turned out to be and the ferocious and commanding creatures they were intended to be cannot be spotted even slightly!

MERL really brought all these doggos together on Twitter and gave us a chance to see them and hear about them in all their glory. However they turned out, there’s no denying that we absolutely adore them and would not change a thing! They gave National Dog Day a funny and endearing twist and we are ever so grateful for that!

Let us know in the comments below which one of these posts was your favorite!