Bulldog lovers, you need to read this!

Bulldogs are one of the “coolest” breeds of dogs. They appear to be all bada** but in actuality, they are tiny little puppers who won’t ever leave your side and would protect you with their lives. But what we are about to tell you today is not just heartbreaking but pretty inhumane as well. Did you know that people would breed dogs unnaturally just so that they could win dog shows?

Back in 1873, people only knew about 40 breeds of dogs that existed at the time, and now there are about 450 recognized dog breeds in the world. Did you know that modern breeds are unnaturally developed by humans through artificial selection? Most of it was developed in the last 200 years. When dog fighting was banned in Britain in 1835, it resulted in people turning to another competitive sport of dog shows.

The main agenda of the show was the appearance of a dog and so breeders would try to make the dog look more eye-catching. But sometimes this meant sacrificing the dog’s health. This is what happened to French bulldogs. They have severe breathing problems, and now people are trying to solve this problem by redesigning their faces. One of those people is Chantal van Kruining, a veterinary assistant who is passionate about French bulldogs. Her vision is to “Breed for health, not show” and change people’s minds so that they care more about the health of their pets rather than their appearance.

Due to their anatomy, French bulldogs suffer from BOAS, and a veterinary assistant from the Netherlands is trying to genetically modify the breed.

French Bulldogs suffer from Brachycephalic Obstructive Airway Syndrome (BOAS), which means that they have difficulty breathing and start panting with their tongues sticking out and gasp even during light walking. The syndrome is caused by skull deformities caused by selective reproduction. This deformity of the skull makes the opening of the nostril too narrow.

Dogs also have a long soft palate and fairly narrow trachea, which increases breathing problems. It is severe enough to cause death.

However, there are people who are concerned about this issue and Chantal van Kruining, a veterinary assistant from the Netherlands, is one of them. She fell in love with this breed, but after seeing all the pain her little pups had to suffer, her heart was broken. The body shape of those dogs was designed by humans who didn’t care about their health but more about their appearance.

Having narrow tracheas and nostril openings, French bulldogs would pant even after a normal walk.

Look at this adorable pupper chillin’ on the sofa!

Chantal’s vision is “Breed for health, not show” and to change dog owners’, breeders’ and dog show judges’ mindset to be more caring about Frenchies’ health

You might think that the whole problem lies with the short muzzle of the French Bulldog, but in reality, it is more complicated than that. On Chantal’s website, Hawbucks French Bulldogs, it is said that the short muzzle is only used for grooming purposes, but the length alone cannot tell whether the dog will have breathing problems. However, the risk will increase. If the breeder ensures that the trachea and throat cavity is wide enough, the tongue is not too long and thick, and the nostrils are open, then things will improve.

Do you see the difference?

Since Chantal didn’t want to see the French bulldog suffer anymore, she went straight into the breeding world. The sad fact she saw was that the breeders did not pay much attention to the health of the dog, and it was very important for Chantal to change this. This lady studied genetics and studied the abnormalities that occurred in the breed and she doesn’t claim to know that she knows everything about how to breed the perfect dogs but she felt that she’s on the right track.

If you go on Chantal’s website, she has stated that she wants to see French Bulldogs becoming more athletic who can run and play without having to worry about being out of breath.

Chantal shares her vision of what kind of dog she and her team are hoping to evolve from the French bulldog on Hawbucks French Bulldogs: “We strive for a French bulldog that is built a little more athletic. A French bulldog how they were meant in the beginning of the development of the breed. A dog that can run and play for several hours without trouble. A Frenchie that does not make a sound when breathing, under any circumstance.”

Chantal makes sure to keep her health testing public so that nothing is hidden from the people.

Chantal was frustrated that the breeding of dogs was shrouded in so many mysteries. Breeders hid information about the breed’s health. It seems that some people think these abnormalities of the French bulldog are normal. This is why the veterinary assistant’s test is so accurate for her, and all the results can be found on her website. Transparency is key, and it encourages people to ask questions you are willing to answer.

Now let’s go ahead and see what people had to say about the long muzzles! Gladly, a majority of them vouched for long muzzles as they looked healthier.

Wait a minute, why didn’t we think of this before!? 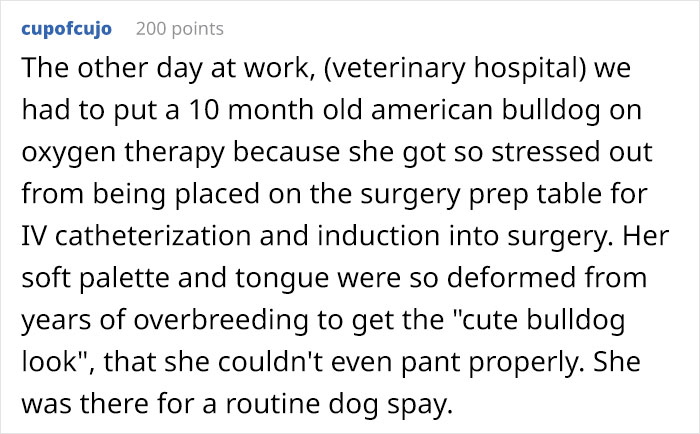 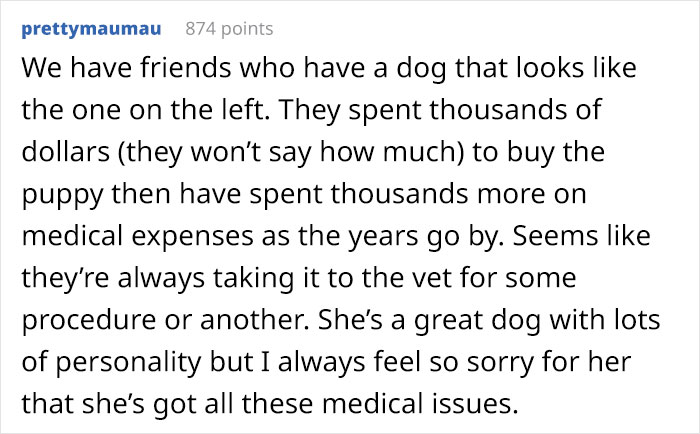 Finally, someone said it!

Well, we have reached the end of this post and we hope that you learned something new! We bet that you didn’t know of these facts, did you? Now that you do, make sure that you share it with your family and friends and we would also like to hear your opinions about it! Feel free to use the comments section below.