Weddings are an important day for the bride and the groom. It’s the day they decide to state their love for each other in a place where everyone can hear it and see it. It’s their day, the first step, and new chapter into the rest of their life. So, it’s given how much importance is given to this day, how much money people spend into cementing their happiness, there’s always a few people who, for one reason or another, don’t want that to happen. Maybe they have problems in their own relationships, maybe they just aren’t happy, who knows?

In this story, one woman, who is recently engaged, goes to her best friend’s baby shower to congratulate her and be there for her. She does this in their home town, where they grew up, and this town is very religious. The writer of the story has no problems with that, but one cousin is an extra preachy, extra nosey individual. The story unfolded rather… Interestingly, let’s say.

The story started off nice enough. 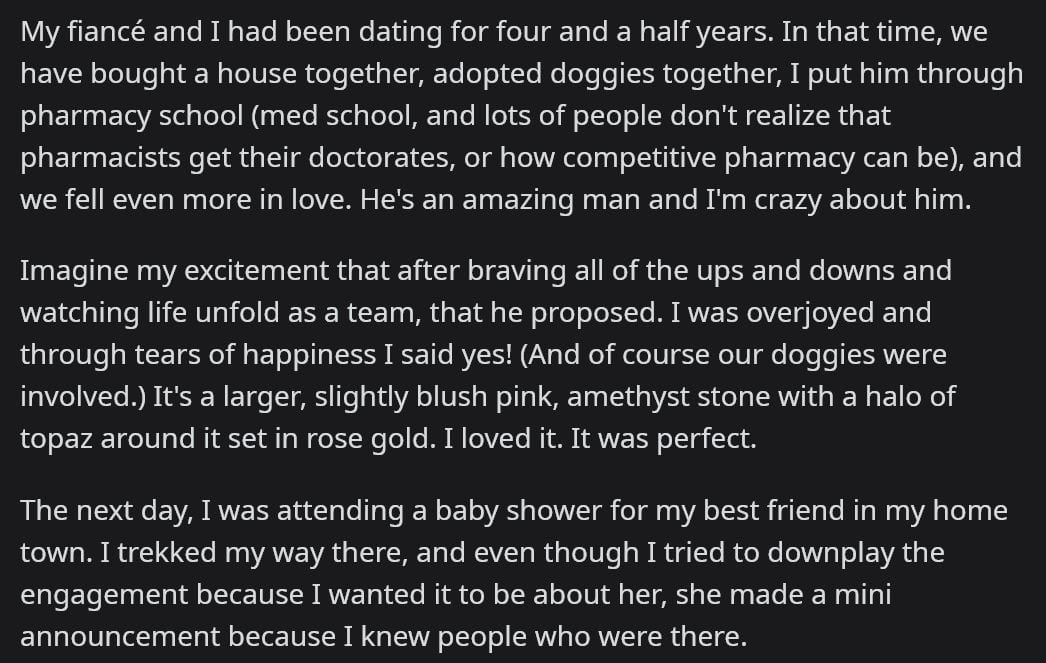 She explained how things were in her home town. 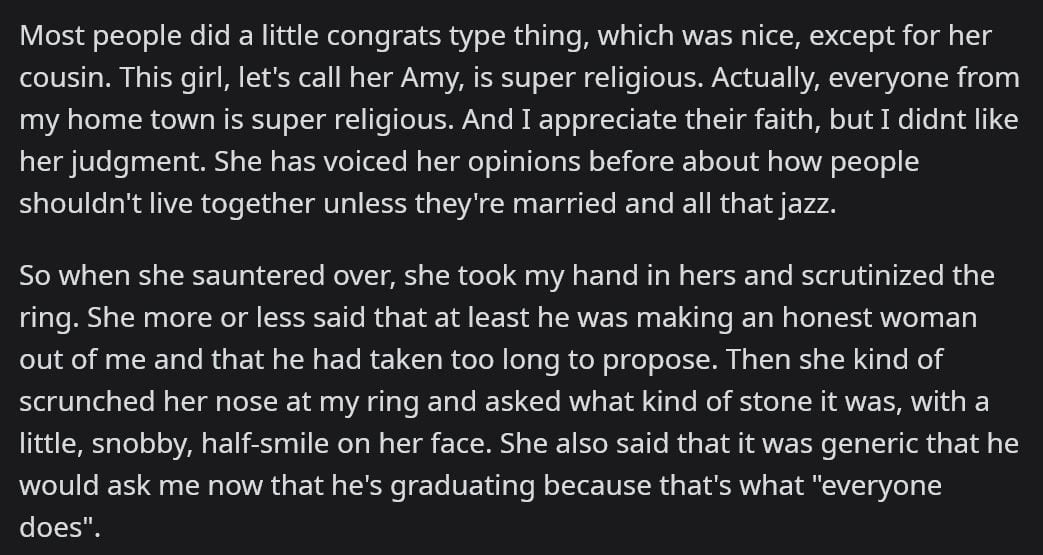 And she fired back something hilarious. 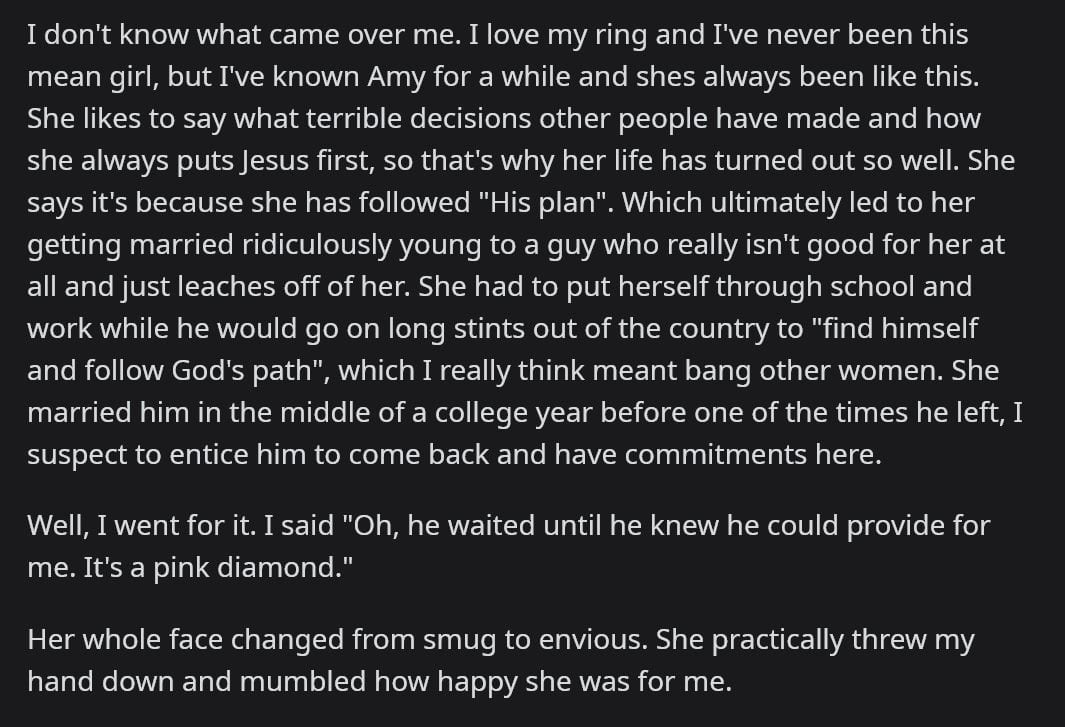 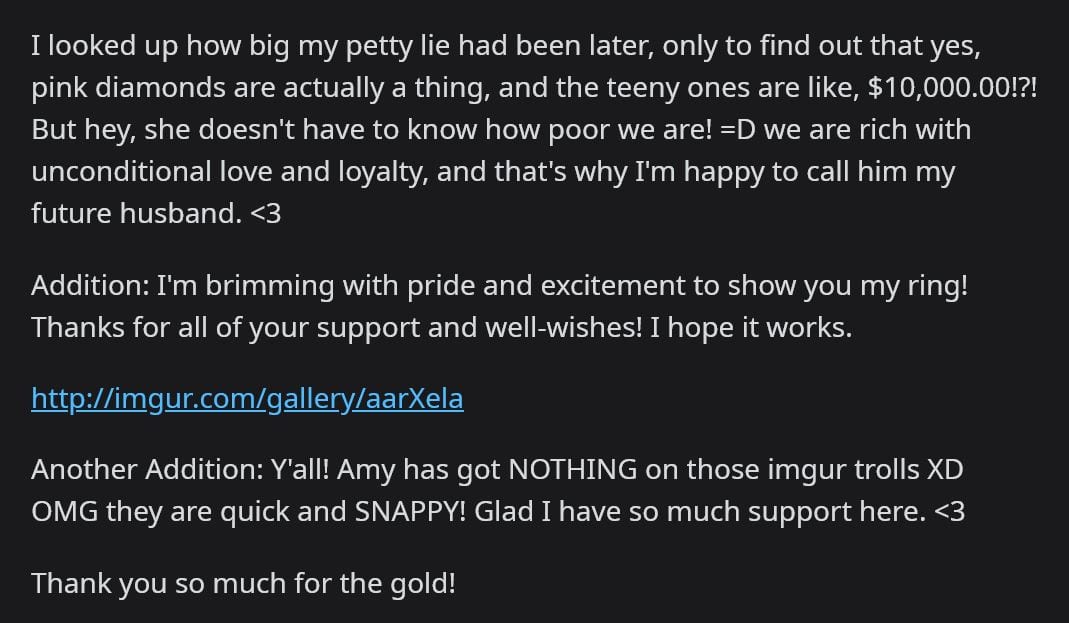 “For a Christian girl your mouth seems to be possessed by the devil.” I said that to someone once, just thought it would be a nice insult for you to use if she tries it again.

They even helped her cement her lie further!

They recalled their own stories too!

I proposed to my wife about three years ago, when I could only find part-time work and was surviving on about $900 a month. Needless to say, her ring wasn’t the most expensive, but I was proud that I was able to save up for a year to buy what turned out to be her dream ring. I had it custom-made based on a description from in her favorite book, so even though it wasn’t breaking any records for jewel size, she’s always said she couldn’t be happier with any other ring.

With that said, there were definitely times I felt bad that I hadn’t spent as much on her ring as some of our friends. I guess it’s just a natural reaction when you’re part of society. But since I proposed, she’s received non-stop compliments on her ring because it’s actually unique. The price/carat/cut/whatever becomes virtually meaningless the moment a ring is purchased, so all that matters is how it makes the recipient feel. It sounds like your fiance picked out the perfect ring, and nobody can ever look down on that.

They’ve got backups on backups. 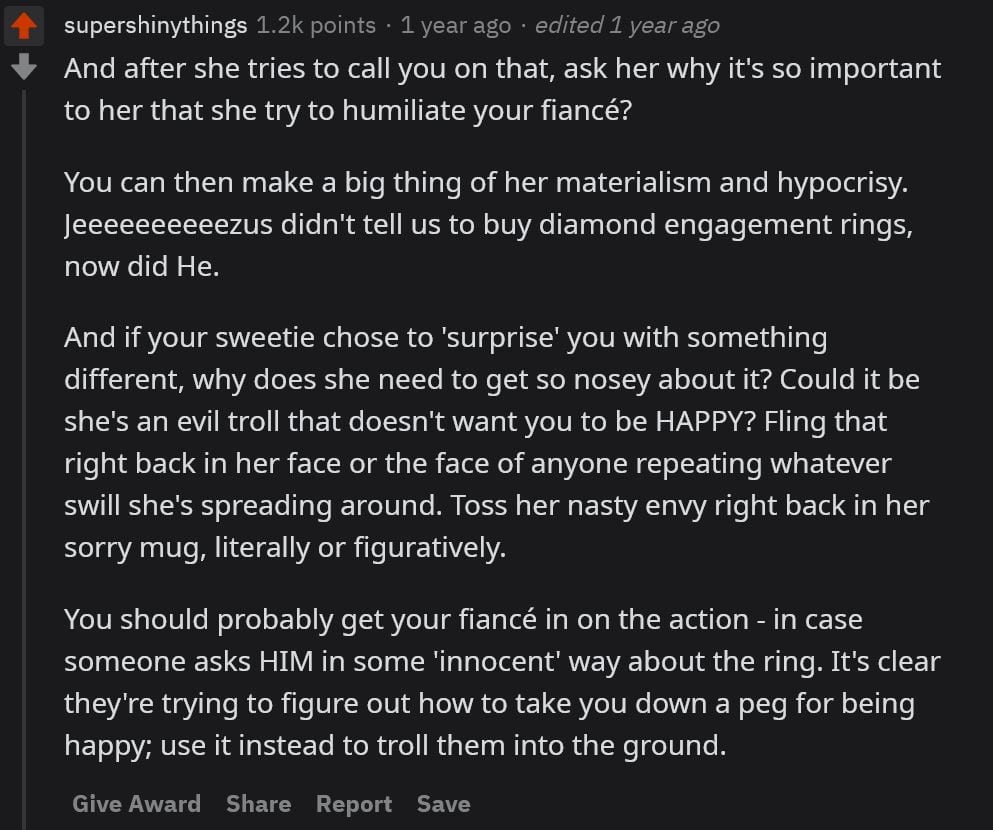 This guy gets it, she was just unhappy. 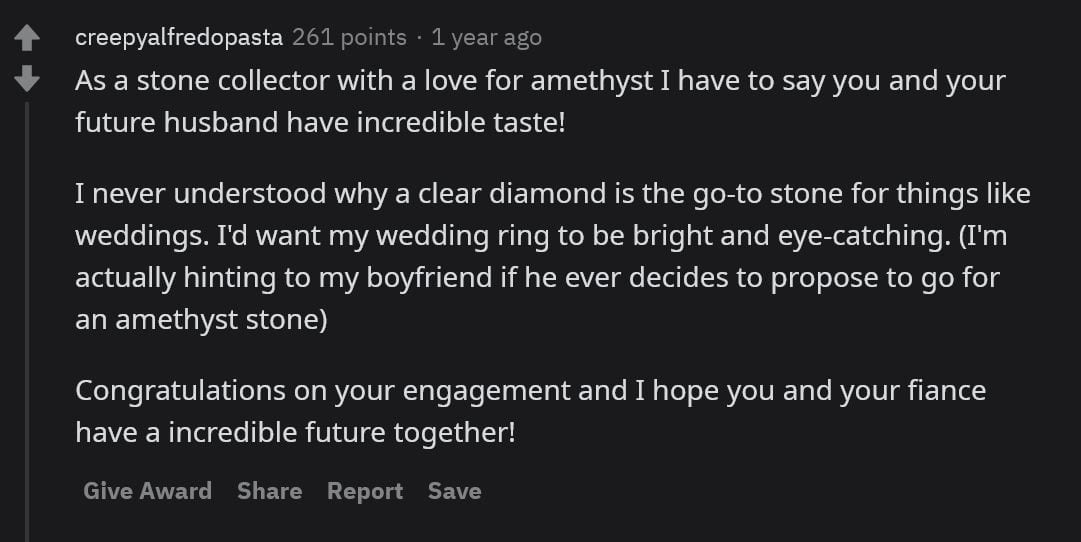 Horror stories were shared too,

I had a cousin who married a very wealthy man with 5 kids, we’re all pretty sure she married for money. When I got engaged she looked at my ring and said, “Oh, isn’t it the cutest little thing!” It was little, but it’s what the love of my life could afford. Well, her rich man turned out to be a horror show and his kids made her life hell. I’m still with my guy, and I proudly wear the cute little thing on my left hand every day.

And this is her ring. 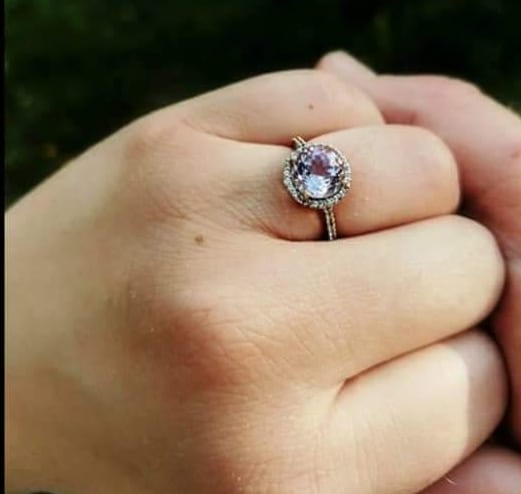 What about you? What do you think? Was she being too over the top or did she have it coming? Tell us about it in the comments!