No offence to the era of Charlie Chaplin and his mind-blowing work, but in the modern era emotion of a character, that is supposed to have a voice, is incomplete without a voice. A character that is mute, is an exception for this because they were always meant to play that role. Today’s world is surrounded by technology and it is improving every single day, innovation is off the chart and it can also be seen in the movies. The best example, we now have an entirely new sector of movies known as animated movies. Animated movies have been around for a very long time, no denying that, and nothing is taken away from the infamous Disney animated characters. My life depended on them as a child. But with time and technological improvements, the animated movie sector has literally changed into something new. The VFX, graphics, and editing work is so swift and on point, that the animated character actually feels super-realistic but also animated at the same time. They have finally struck the right balance and that’s the reason the demand for these movies has increased drastically, but it is a very costly process.

In order to make our favorite animated characters even more lively, they need an appropriate voice. Suppose there is an animated version of Sylvester Stallone voiced by Chris Tucker, that just simply wouldn’t work. So finding the right voice actor to dub their voice over the animated character is a proper challenge. By the way, you have o give to him, Benedict Cumberbatch is a legend when it comes to voice acting. Anyways, hiring good voice actors can be tough and costly but production houses have massive budgets and celebrities also realize the potential in animated movies so they hope on board and create magic behind the mic.

Today we will be showing you 15 of your favorite animated characters side by side with the celebrities who voiced them. You are going to love this one.

1. Sir Lionel Frost from the movie Missing Link was voiced by none other than the Wolverine, Hugh Jackman. He didn’t use the tough voice of Wolverine so don’t worry. 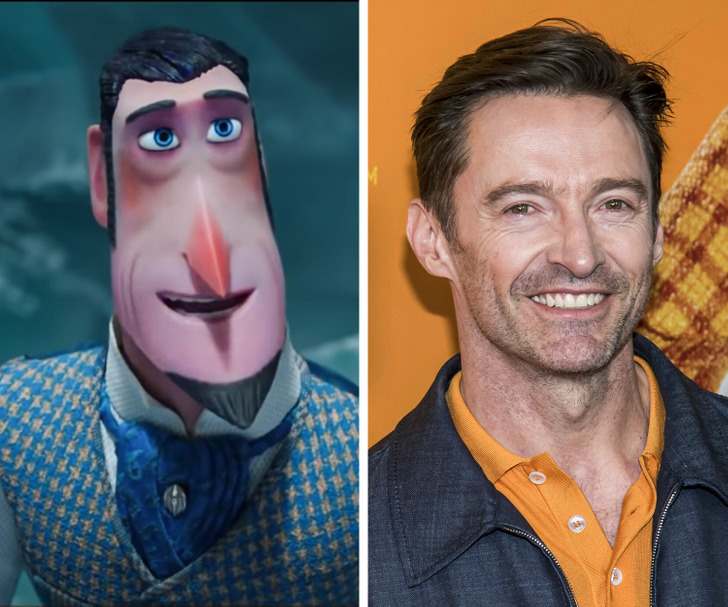 2. Keanu Reeves is the voice actor for Duke Caboom from the movie Toy Story 4. 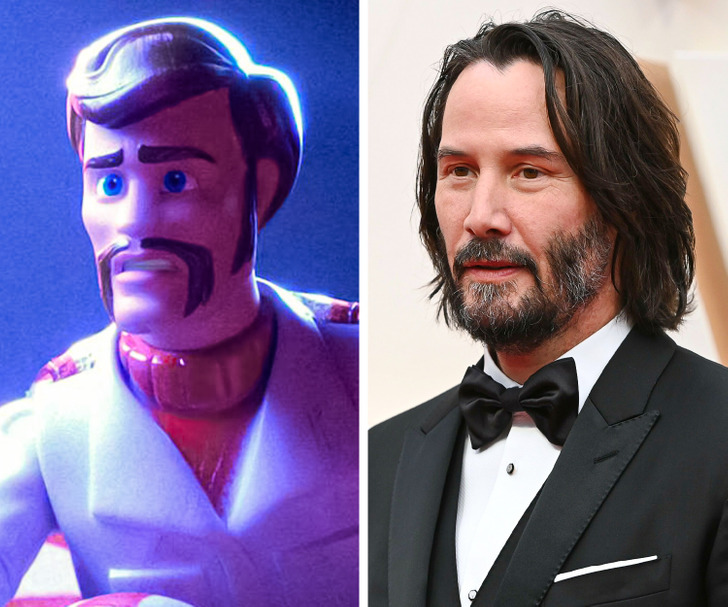 3. Mrs. Fox from Fantastic Mr. Fox has the honor of being blessed with the voice of the legendary Meryl Streep. 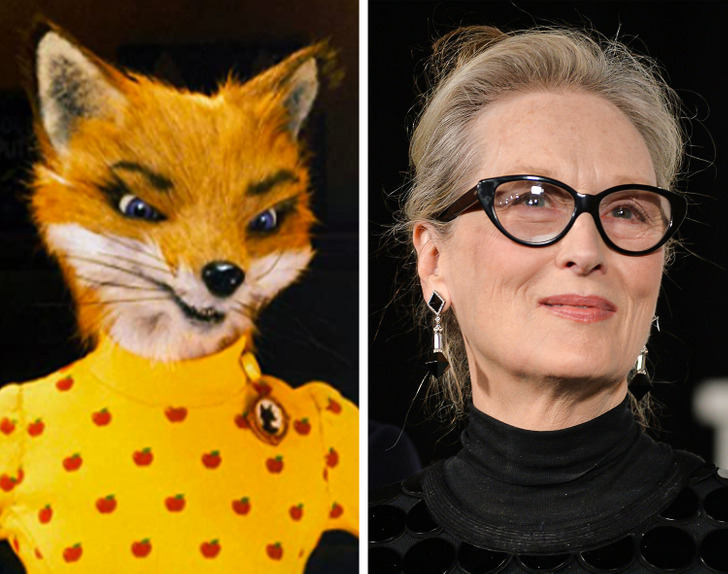 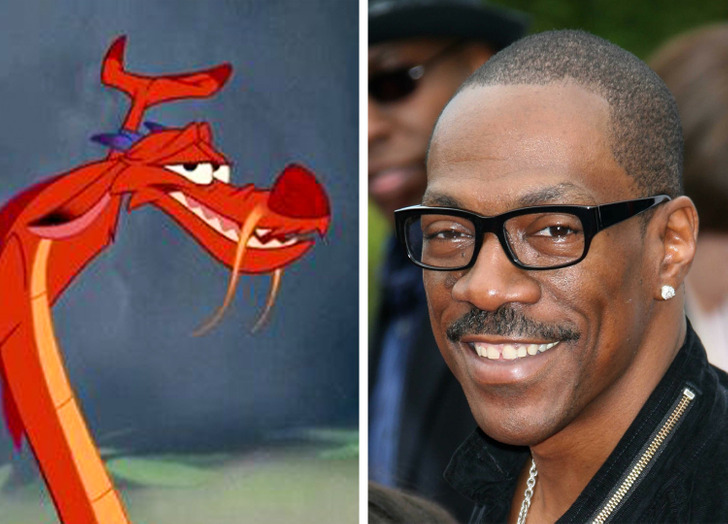 5. No one would’ve done better voice acting than Rihanna for Gatuitity Tucci in the movie Home. 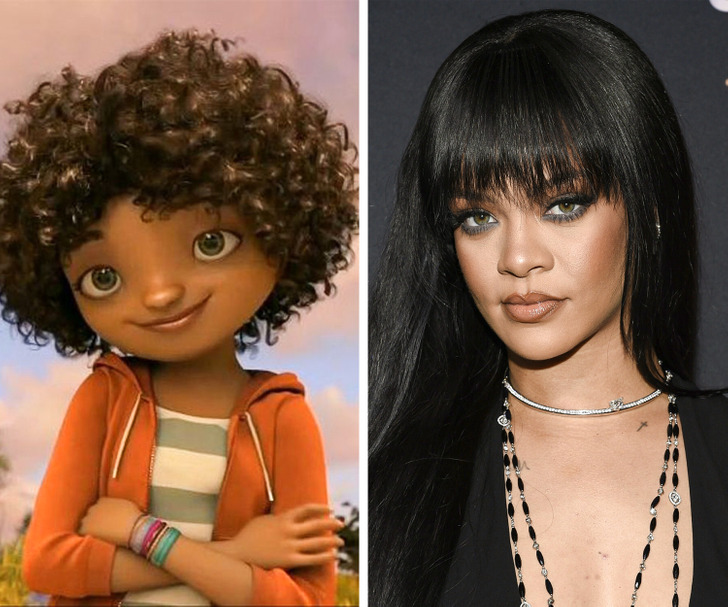 6. Christian Bale recorded his voice for Thomas for the movie Pocahontas. 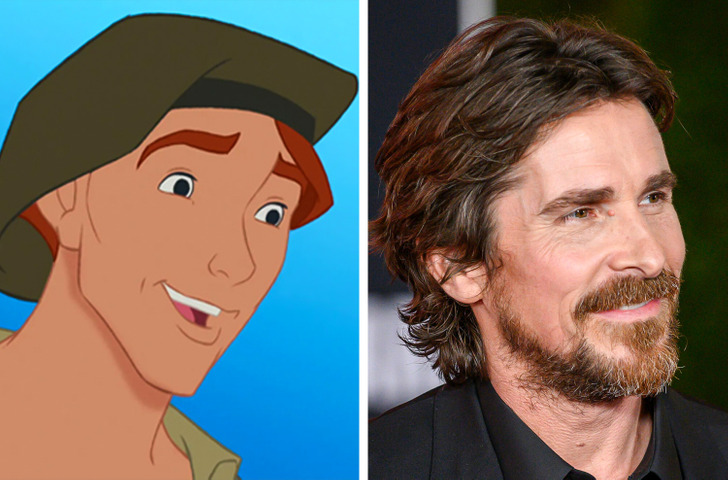 7. Meechee from Smallfoot has the voice of the gorgeous Zendeya. Her voice work in this movie is as fine as she is. 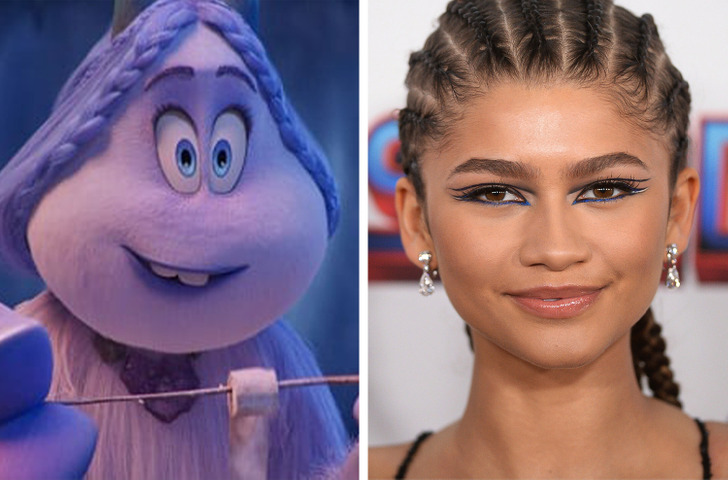 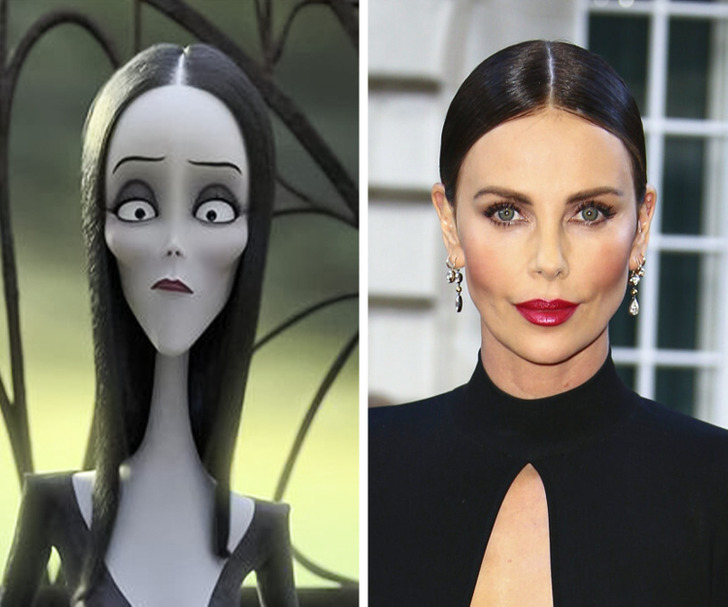 I don’t think there really would’ve been a better voice actor than the celebrity who voiced it. What a perfect combination and you have to give it to the moviemakers. Thanks to all these celebrities for breathing life into these characters and I really cannot imagine a better version than the one we have of these characters’ voices.

On a deeper note, and I don’t know if you feel the same way as I do, Hugh Jackman and Sir Lionel Frost, and Charlize Theron and Morticia Addams have a very similar facial resemblance.

Let’s enjoy some more revelations. Scroll down below to continue.

9. It was Miley Cyrus’ voice used for Mainframe in Guardians of the Galaxy Vol. 2. 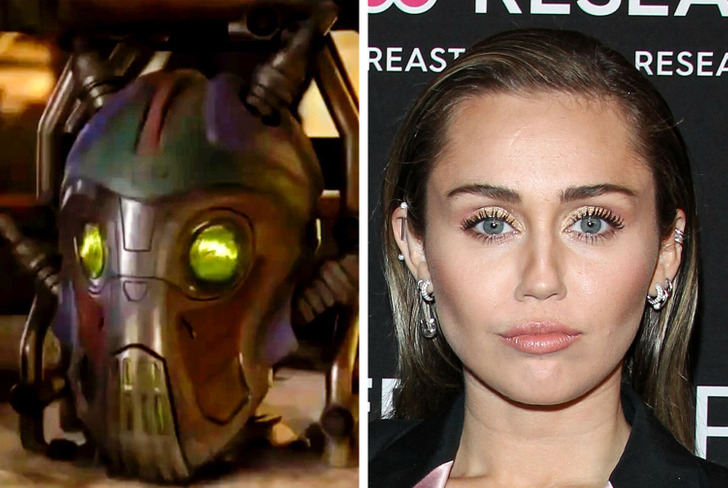 10. Thank you Tom Holland for being the voice actor for Water from the movie Spies in Disguise. 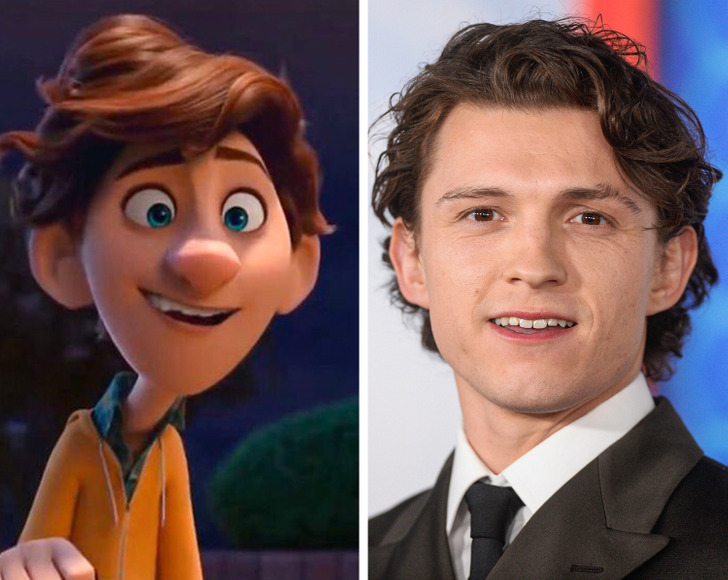 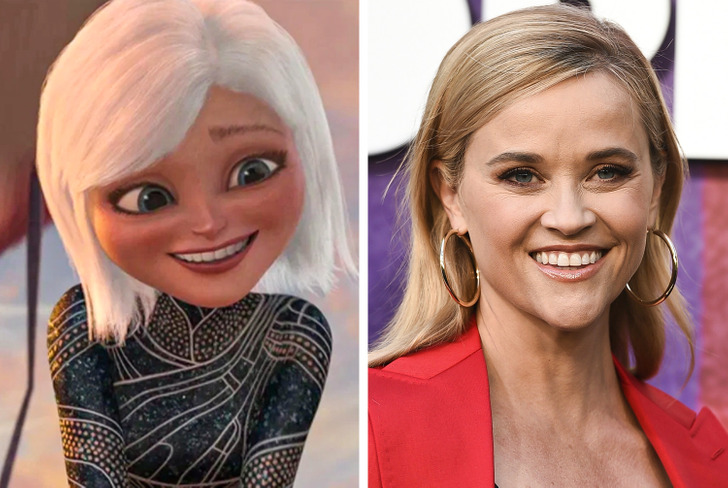 12. They literally look the same laughing. This is Eudora next to her voice actress, the legendary Oprah Winfrey. 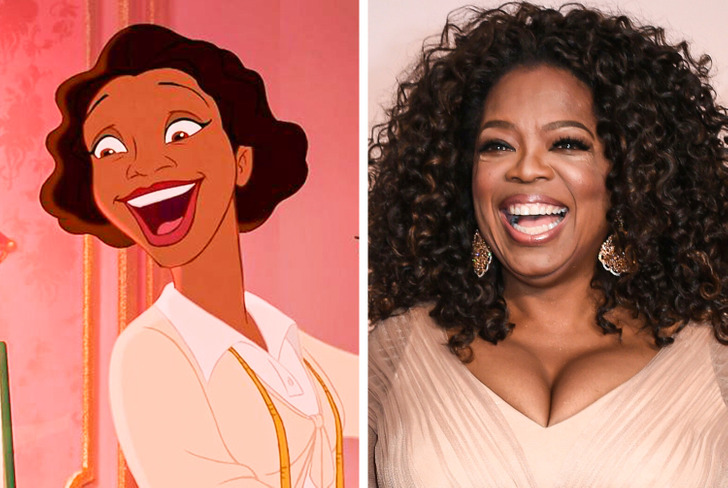 Via The Princess and the Frog / Walt Disney Studios Motion Pictures, AFP/EAST NEWS

13. Anne Hatheway is the voice actress for the parrot Jewel in the movie Rio. 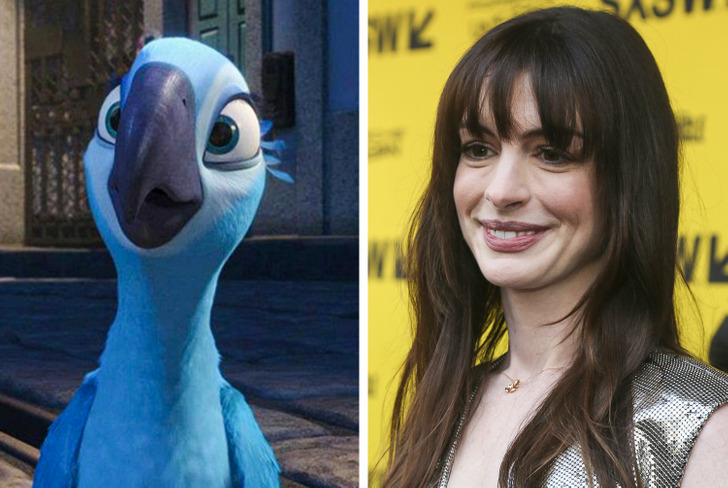 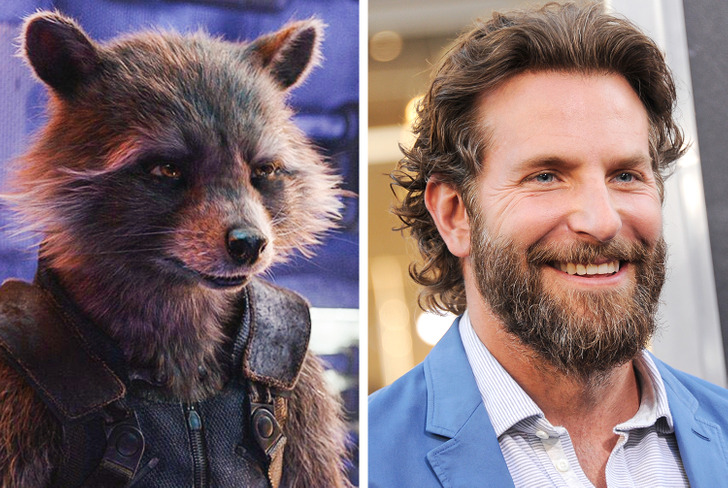 15. SmurfWillow from the movie Smurfs was brought to life by voice actress Julia Roberts. 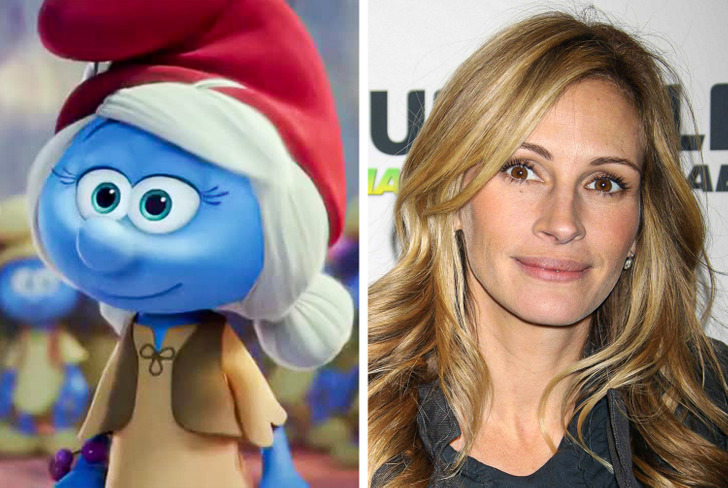 I really hope you guys enjoyed this one. Don’t forget to share your thoughts in the comments section down below. Whose voice do you love the most.?