Despite their cuteness, overly chubby or fluffy animals aren’t healthy. Pets spend much of their time indoors. They are no longer reliant on foraging for food on the open range. They have a tendency to overindulge in food. Obesity and overweight pets are unavoidable when calories are consumed in excess of calories burned. Some pet owners have gone to extraordinary lengths to make their overweight pets look and feel better, and the results have been nothing short of amazing. These are some of the best photos of animals before and after their weight loss adventures. 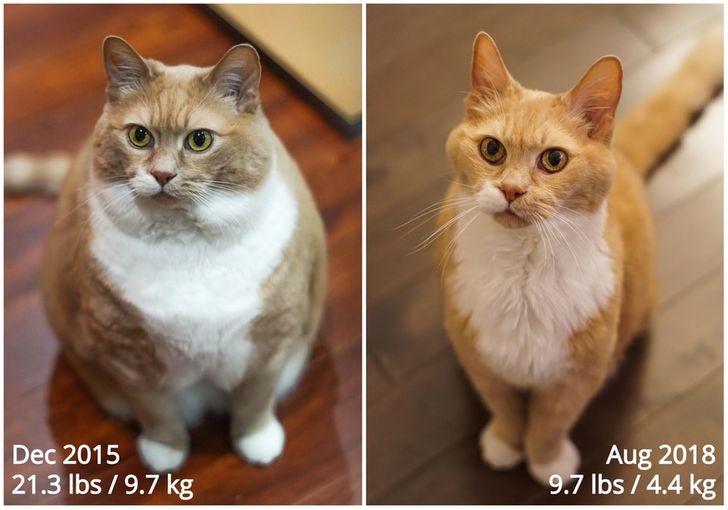 At the time of adoption, Kato’s new owner saw that he was clearly overweight. The cat became accustomed to overeating. Over the course of a year, the size of his portions returned to normal, and today we can see the excellent result.

2. He looks extremely happy with his post-diet body.

Brooke agreed to take care of her relative’s dachshund in 2013. A tight diet, lots of exercise, and love helped a lot. After multiple surgeries, Dennis’s superfluous skin was completely removed.

Shiva, a Norwegian Ridgeback, was adopted at the age of 4 by a kindhearted person. She now enjoys the benefits of fitness and wellness. The development we see now took ten months, and Shiva shed up to ten kilos.

Lola was placed in a rescue center and was then adopted by Dank, a wonderful foster parent. She initially weighed 13lbs and could barely walk. But now she has almost lost half of her initial weight and looks absolutely amazing!

5. He went from an absolute chonk to now a beautiful chonk.

Before he was rescued and adopted by Jacky in Irvine, California, this stray cat was living in the wild. It took around a year to lose weight. Slow and steady wins the race, right?

6. He looks so much healthier and happier!

Buddy was incredibly deprived of any sort of physical activity. His owner is an elderly lady who couldn’t take him on walks. But then a friendly neighbor decides to take matters into his hands and help Buddy out! Buddy walked for six months to obtain this beautiful result. In fact, Buddy has even started running again.

7. We can see those toned muscles and have to say that, Boss looks amazing!

Because his owner was unaware of a condition, Boss was 35 pounds overweight when the veterinarian discovered it. The incident was taken seriously by his owner, Jen, who changed his diet, added more exercise to his daily routine, and invested in a special spiral feeding bowl. They are now both extremely content with their lives and situations.

8. He is still on his journey to weight loss. Keep going, Hugo!

Hugo eats vegetables for lunch, and his owner ensures that he gets plenty of exercise every day. Hugo the pug is still on his journey to 9kgs but looks incredible!

Due to the constant effort of the owner, Equestrian looks absolutely fit and healthy. This transformation took around a year and a half!

Fraggle was removed from her first home because the owners’ kids did not get along with her. Her second owner, however, helped him shed weight from 10 kilos (22 lb) to 7.5 kilos (16 lb). The new owner is really pleased with his weight loss!

11. Slow and steady wins the race!

Obie the dachshund has gone through an incredible transformation over the course of 6 years! And he is maintaining his new healthy weight for over three years now.

The fact is that not only humans but also animals can gain weight if their food isn’t carefully monitored. So, take good care of your pets. Do you have any success stories that you want to share about your pets?