Dogs are one of if not the most beautiful living beings in the whole world. They are just so naturally majestic looking with all the perfect features. From a coat that makes them look like the kings and queens of the world to an adorable face. See, normally people have preferences, some like small eyes, some like deep eyes and so on. But when it comes to dogs, they pull off every feature there is to exist. And the backing evidence for this can be a statistically proven fact that dogs are the most adopted animals in the world; 1.6 million dogs get adopted every year. There are a lot of dog breeds, that are different types of dogs with unique characteristics and features. One breed can differ quite a lot from the other. Now some researchers quote there are about 195 dog breeds while others say the number is as big as 300. So fit is safe to say, there are a lot of different dog breeds out there in the world, each with a unique, lovable feature that attracts us to it. But one thing that is common in all these breeds is that they are all gorgeous and eternally beautiful dogs.

Now, humans can feel love and so can dogs. It is not necessary to feel that love for someone who is from your family, you can fall in love with absolutely anyone. For dogs, it can be dogs from other breeds, and not just their own. Now, whenever you marry people who are not from your family, the genetic diversity in your offspring when you mate is very high, and the results can be very unique. In dogs, we refer to offsprings of two different breeds as a mix-breed. And these mix-breeds end up looking so unique and adorable, that you cannot take your eyes off of them.

Today we are going to look at some of these wonders of genetic variation and you will see it for yourself, that the magic of genes is real.

1. This gorgeous dog is a mix between a Corgi and a Doberman. 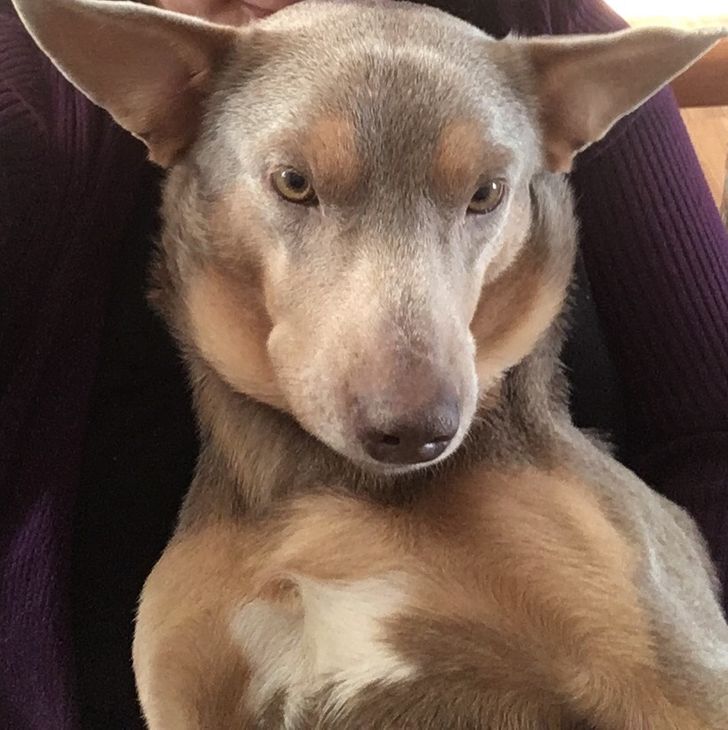 2. This black and white wonder of the world is a mix between a Pug and a Husky. This was bound to be good. 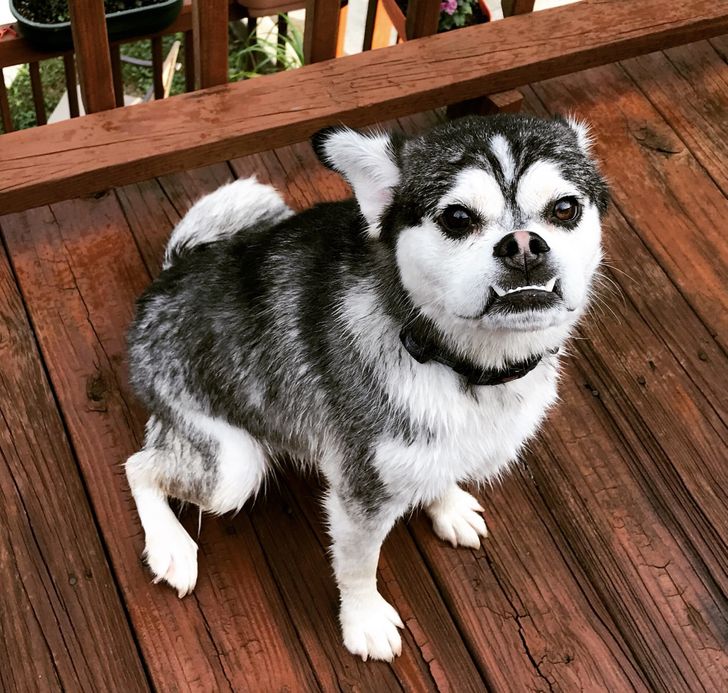 3. Anyone can fall in love with the eyes of this gorgeous mix between a German Shepherd and a Husky. 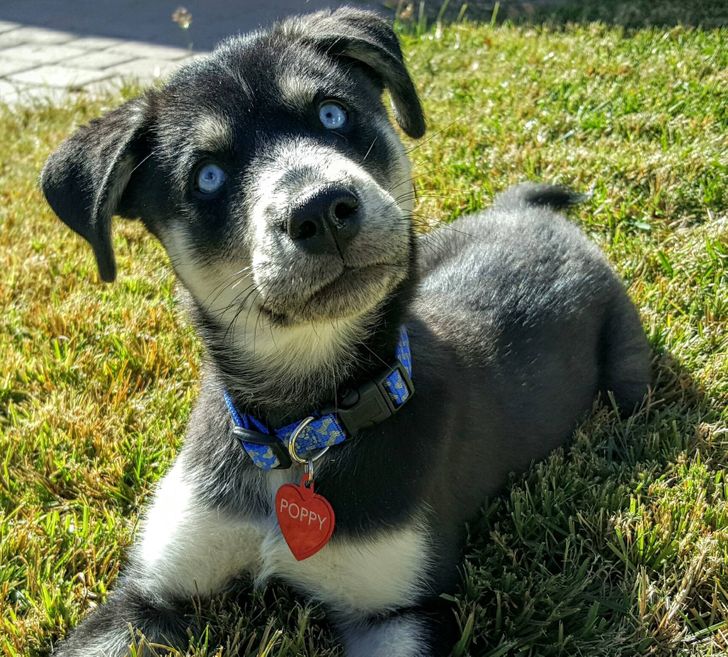 4. This innocent boy is the outcome of a marriage between an Australian Shepherd and a Rottweiller. Its fr is so cute. 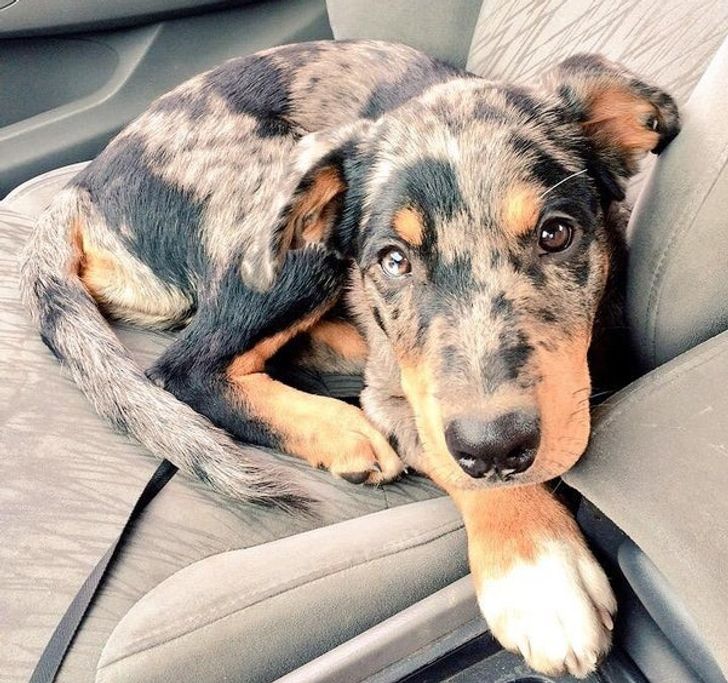 5. When the lower half of your face looks like an English Bulldog and the top half looks like that of a Dachshund. 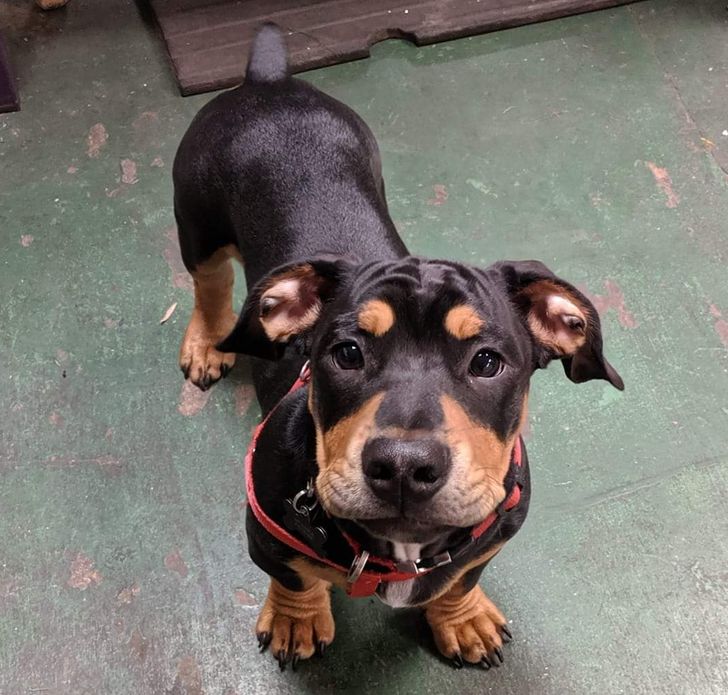 6. This mix between a German Shepherd and a Husky has multi-colored eyes. This is a rare genetic condition called “heterochromatin”. 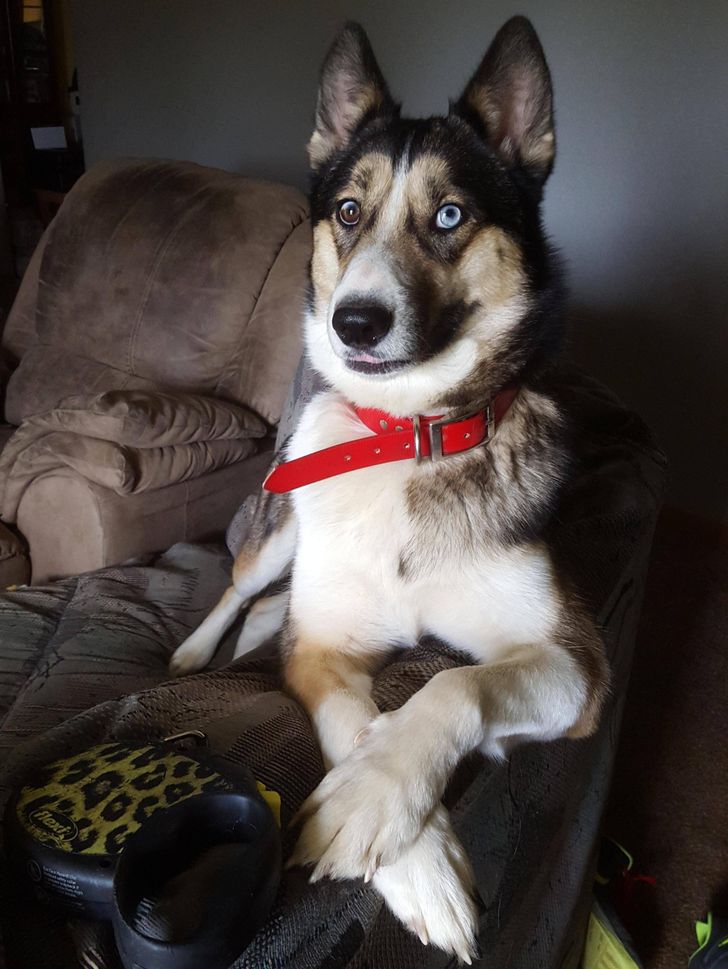 7. This dog wins the award for the cutest pup ever, thanks to his Australian Shepherd mom and Corgo dad. 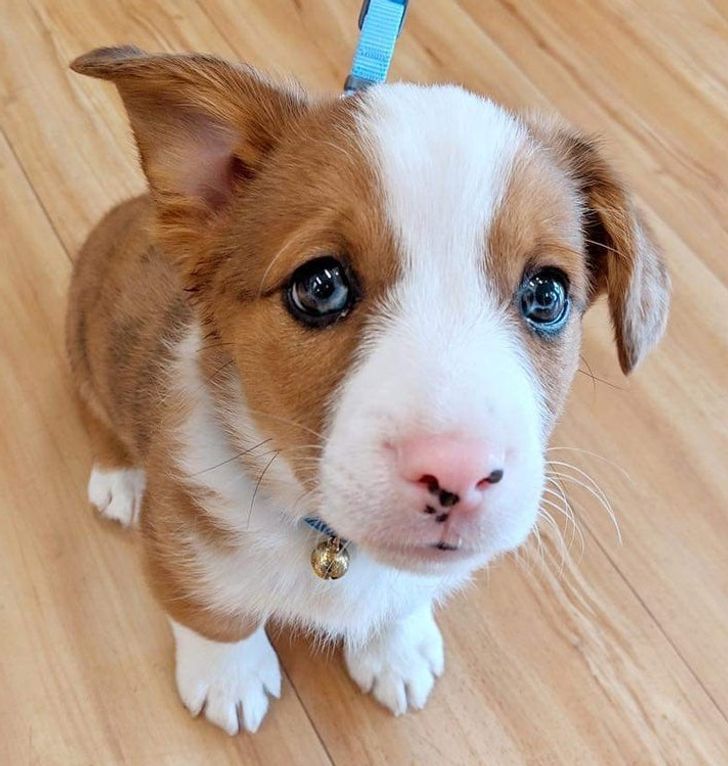 8. This adorable pooch is a result of a mix between a Golden Retriever and a Dachshund. I absolutely love those tiny legs. 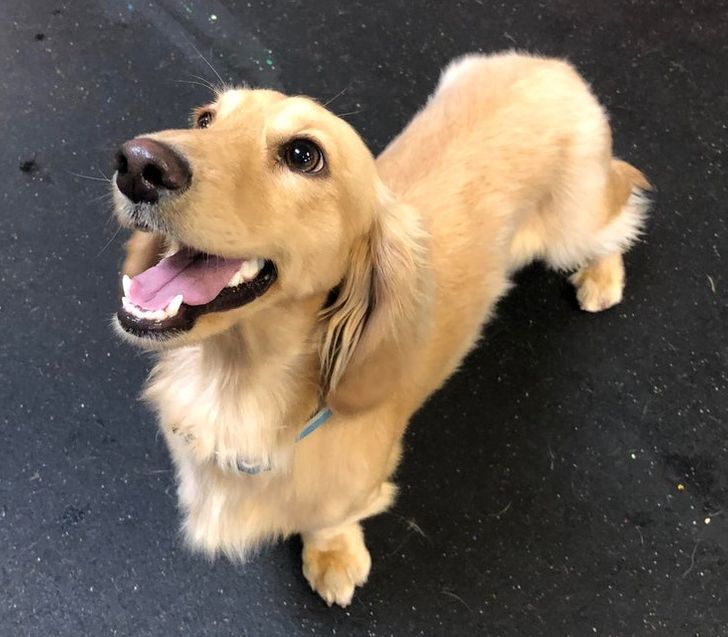 9. This furry boy has the genes of a Newfoundland and a Border Collie. 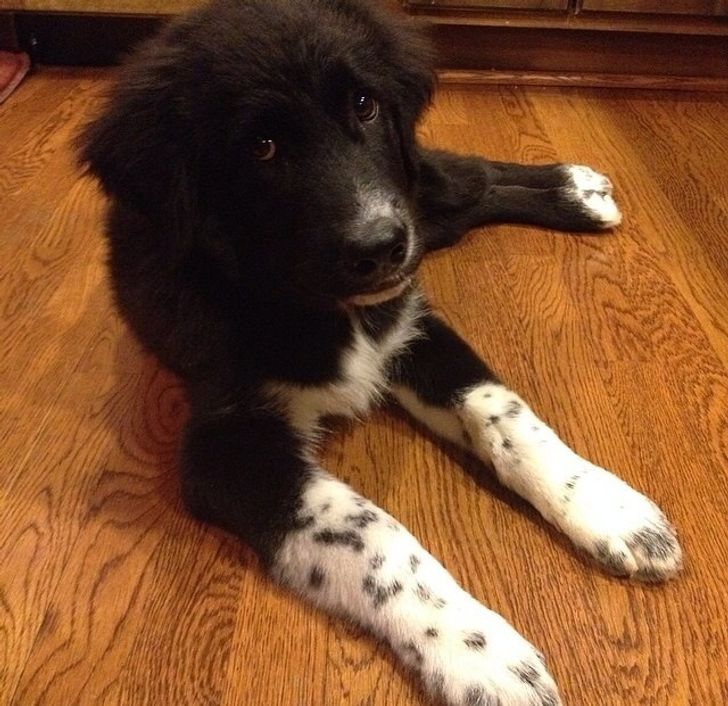 10. This Australian Shepherd and Corgi mix knows what its best feature is and is fully showcasing it. 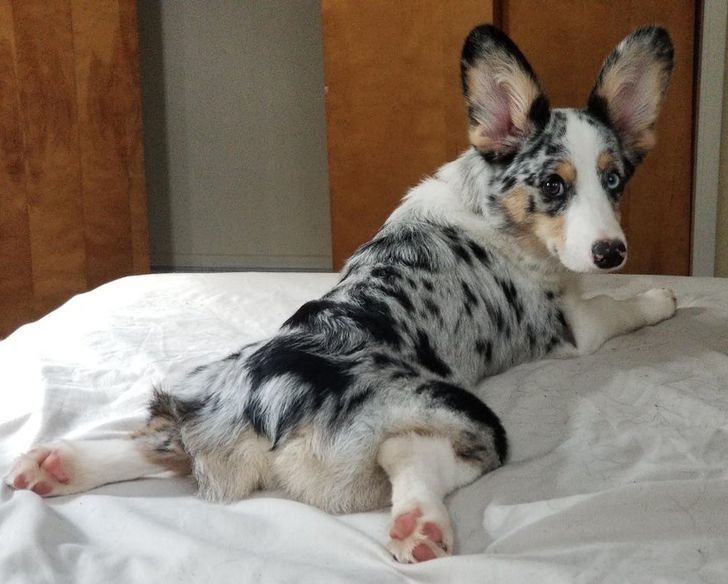 11. This doggo got gifted blue demonic eyes and I am 100% sure one of his two parents was a Husky. 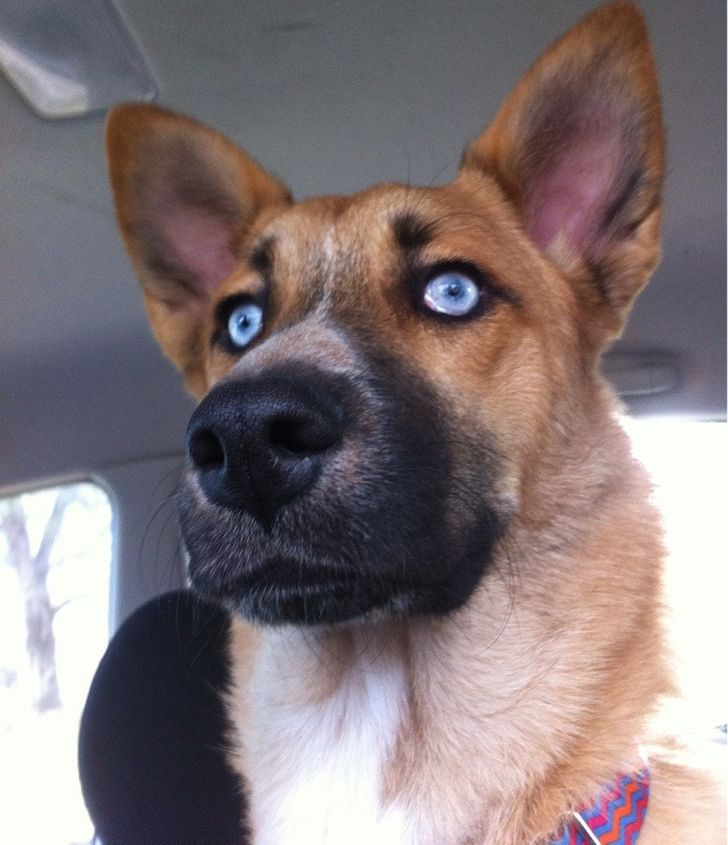 The coolest thing I have noticed is that a mix between two different breeds will not always look the same. A mix between a Shepherd and Corgi has looked different in different images. That’s why genetics are so cool. Some genes pop out as dominant while others stay in the hiding as recessive, but when two different dogs breed, a mix of both’s recessive and dominant genes are inherited by their pup. That is why ladies and gentlemen, we say genetic variation is no less than magic. I am wowed by these results.

Scroll down below to look at some more gorgeous dog mixes.

12. This is Juno, a mix between a Shepherd and a Husky. Thanks to his gene, he has a heart shape fur on his face. 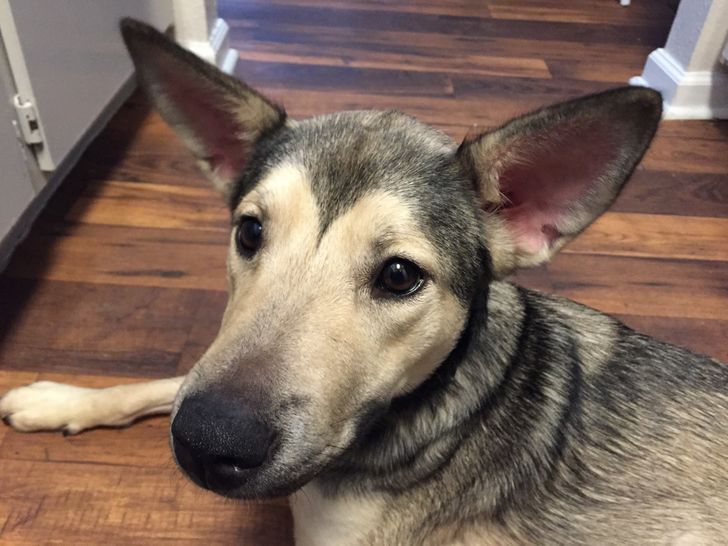 13. You can see both the Corgi and the Pug in this beautiful rescue pupper. 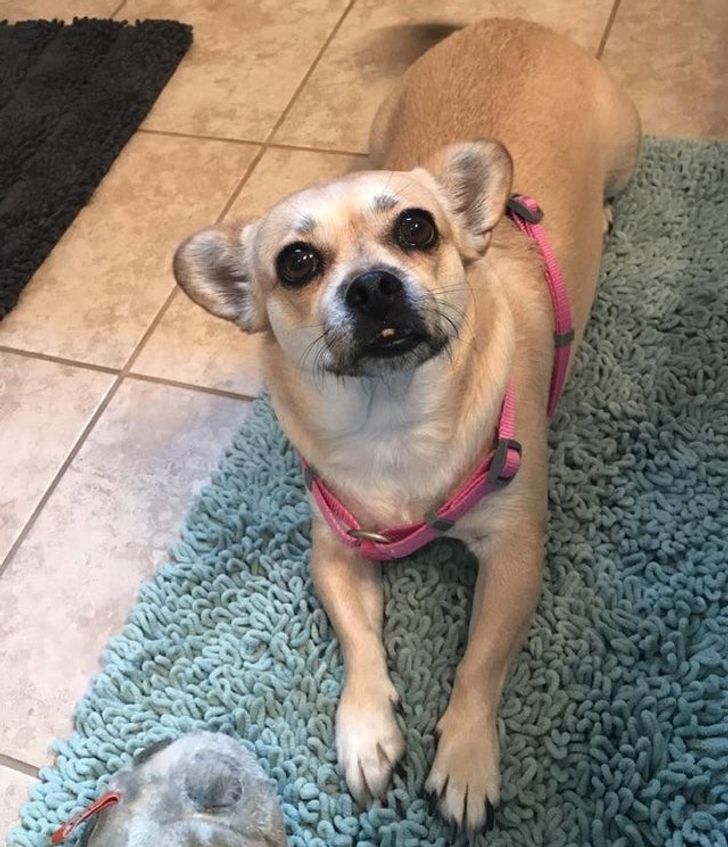 14. He has a very unique charm thanks to his Boxer and Shar-Pei parents. The mature look deserves all the appreciation. 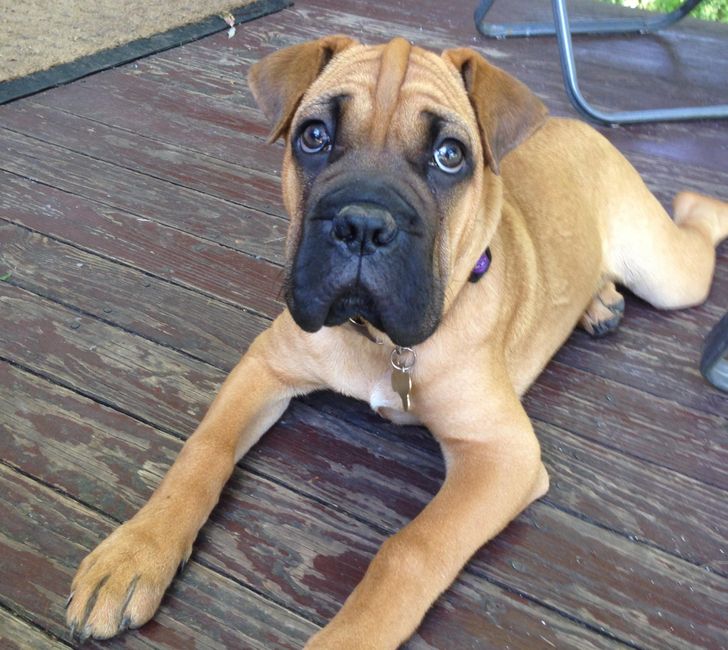 15. This dog is a very rare mix of 3 different dog breeds. He is a half golden retriever and the remaining half is further divided into two; a boxer and a husky.

That far coupled with those eyes, this dog is certainly worth talking about. 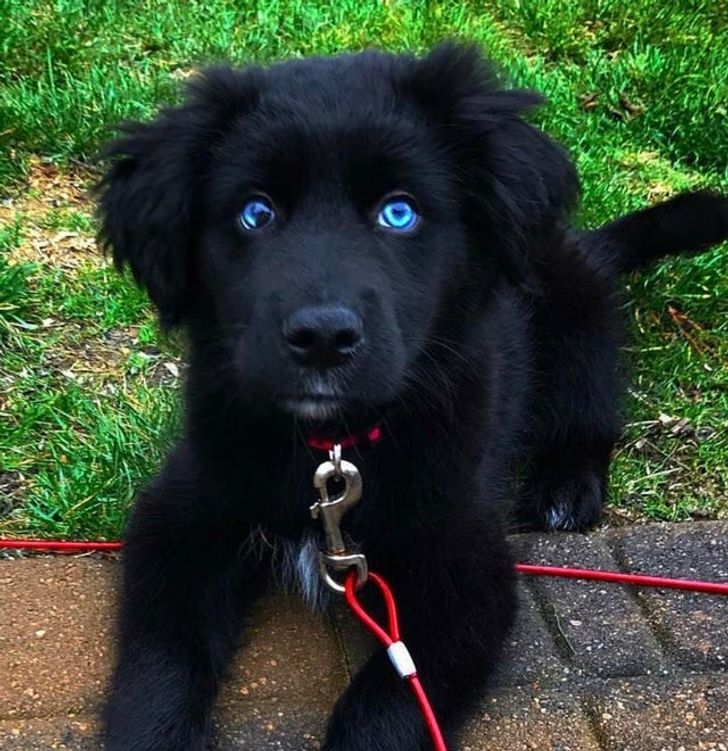 16. This Shepherd and Husky cross is the most unique one I have seen so far. 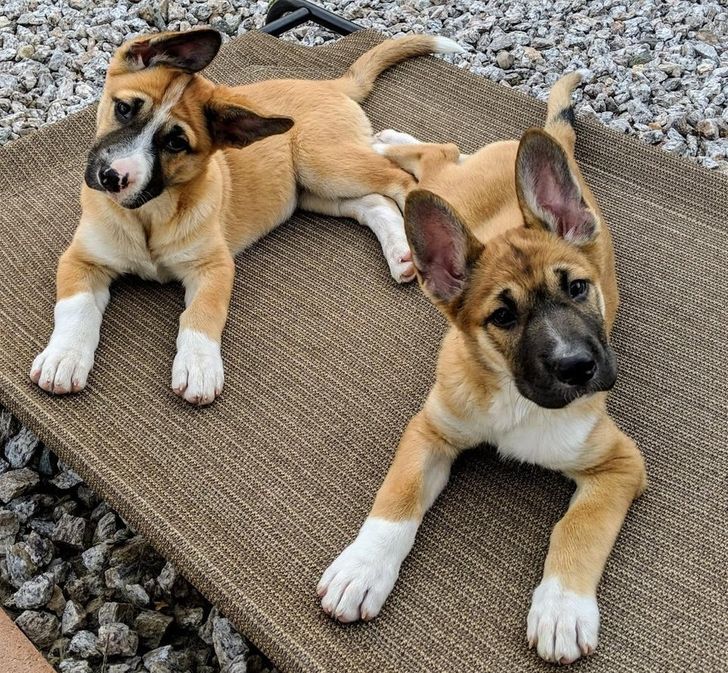 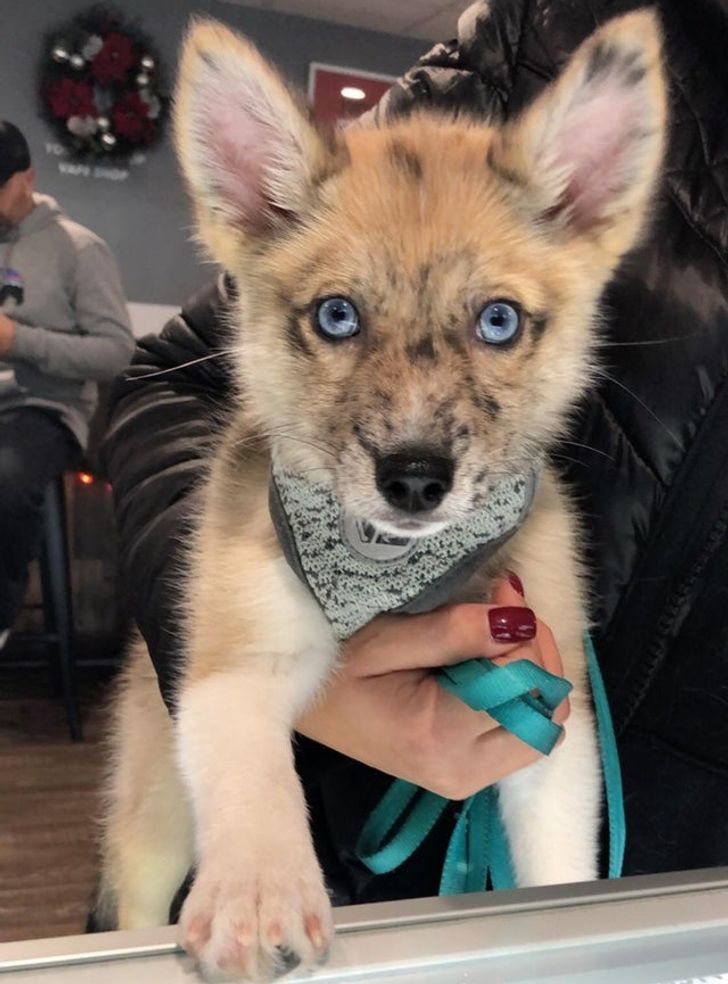 18. This innocent mix-breed is a cross between a Weimaraner and an Alaskan Malamute. 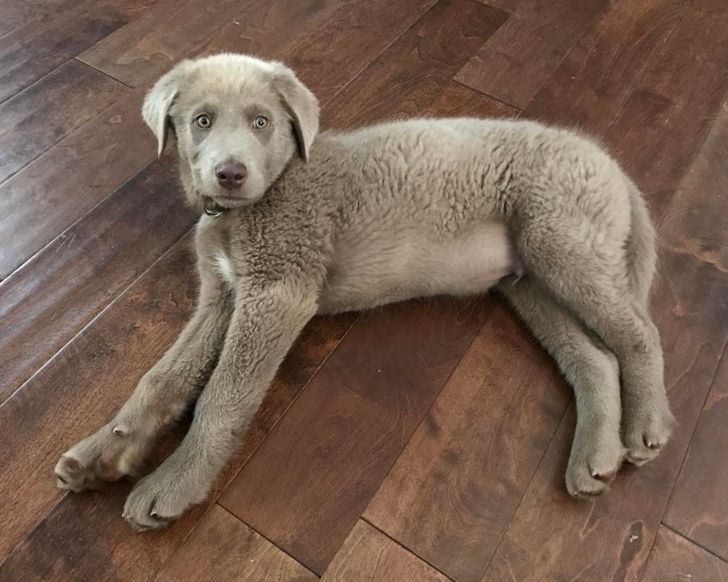 19. This naughty boy also has heterochromia which blessed him with two different colored eyes. This one is a cross between a Corgi and German Shepherd.

You can just see it in his face, he is a very mischievous cute boy. 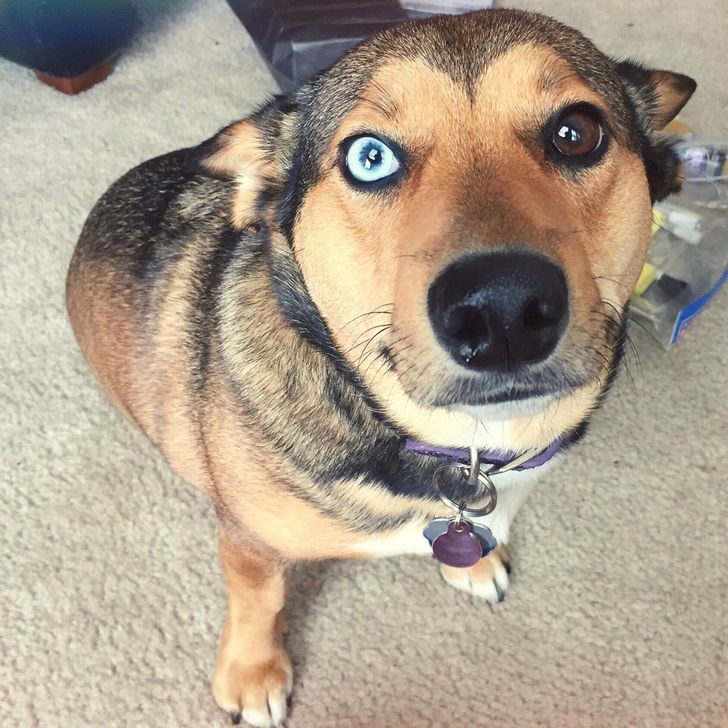 20. This is Clyde. He is a mix between a Pitbull and a Corgi. And the reason why he is making this hilarious face is that his owner threw a tennis ball at him to catch. 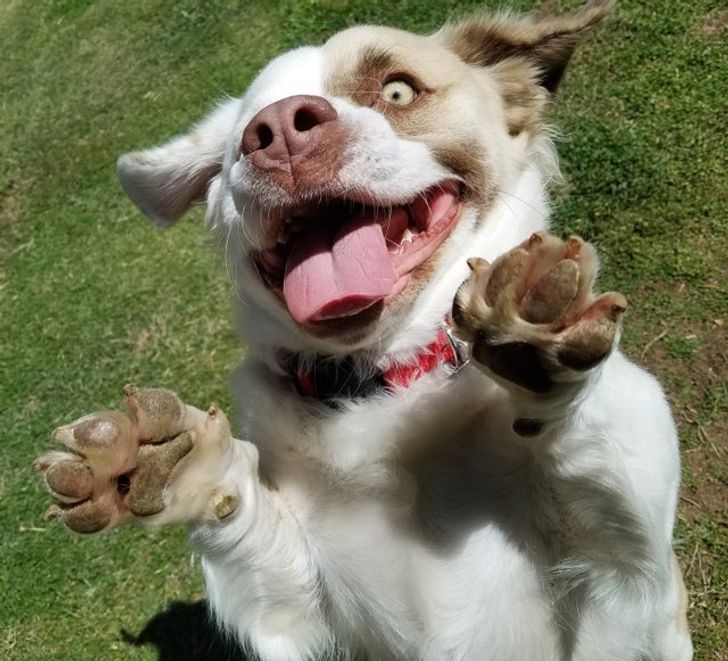 Fetch is everything to dogs so it is normal to see them be this emotional when someone throws something at them.

21. This charming boy is half Dalmatian and half Pitbull. You can fully see both breeds in there. 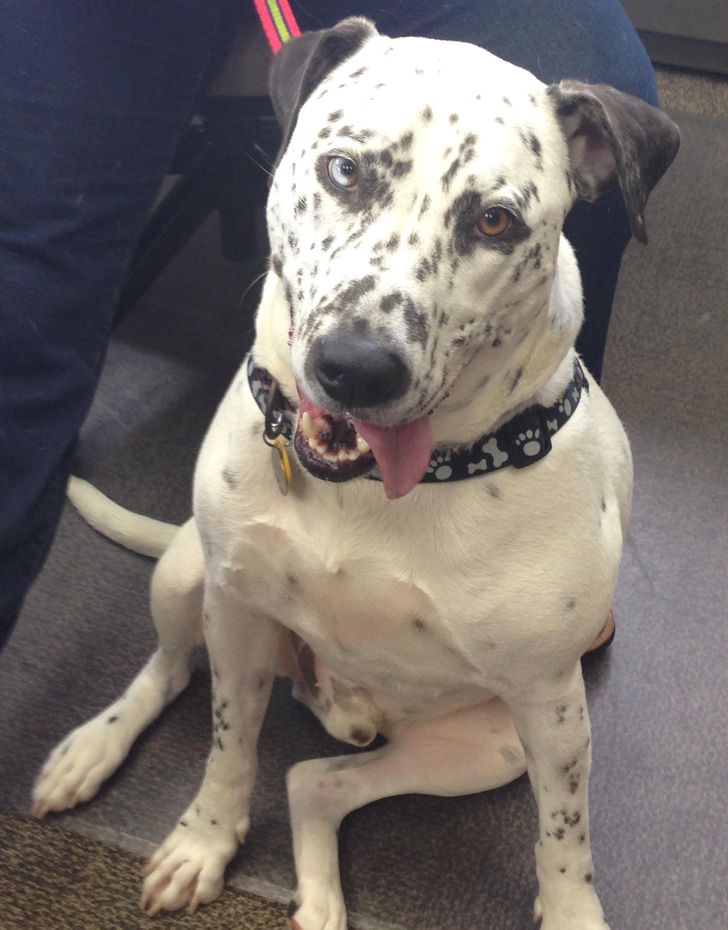 22. And last but definitely not last, this beautiful boy owes his beauty to a Corgi and a German Shepherd. 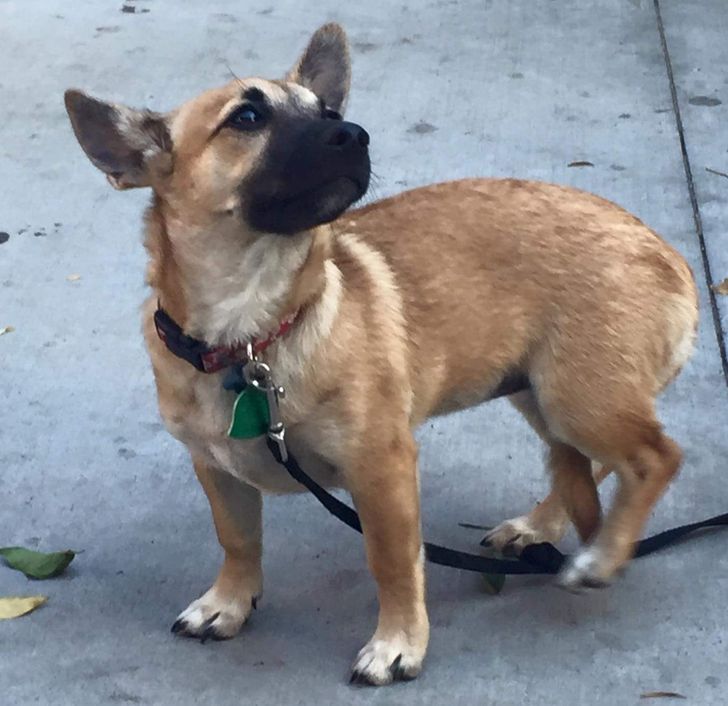 I really hope you guys enjoyed this one. We won’t be anywhere without dogs.