Being married someday to someone is the most wonderful feeling in the world. What’s more beautiful than watching two hearts becoming one soul. The preparations for a wedding can take months, and the excitement of finally being married is out of this world.

However, getting married means wondering what to include in your wedding suite. It takes a massive amount of time and effort to design, package, and send wedding invitations. Before you even start designing, you’ll need to do some research. Because designing a wedding card is the most crucial element of the wedding because it is where you invite your guests and it should include all of the important details for the wedding day.

Anyway, you may have been to a number of wedding receptions in your life, but you may not have been to one where you were asked to pay for the meal after receiving an RSVP. Doesn’t it sound strange? One woman revealed her weird and awful conversation and event with the Bride-to-be in a Reddit forum post. Things looked to be going well after getting a wedding invitation until she received a phone call from the bride, who asked her to pay the amount for the wedding food. When the majority of the guests heard this request, they opted to cancel their participation at the wedding.

So, just read out the complete story by scrolling down!

The majority of the wedding guest were confused regarding the payment for wedding food.

So, the bride-to-be mailed her wedding invites to her guests, and a few days later, the guest received an odd voice mail.

Who on earth charges a $150 wedding food fee? It sounds unusual because this is the first time we have seen such an invitation.

The OP shared the whole conversation with the bride-to-be, and it’s quite strange!

When asked why the wedding food fee was being charged, the bride-to-be became furious.

…and the bride ended the call!

Wedding celebrations should be the most memorable event of one’s life, and everything should be carefully arranged down to the smallest detail.

The luxury wedding planner and event designer at Lucy Till French Wedding, Aurelie Della Maggiore stated: “I honestly never heard any bride and groom asking their guests to pay for their food,”

She added: “That’s also not something I will recommend to my client to do. If you don’t have the budget to afford a wedding dinner, then my advice will be to cut the guest numbers and to have an intimate wedding, or to do a stand-up cocktail instead of a formal served dinner to try to cut the costs down.”

Aurelie also said that “if you plan to have your guests pay for something at your wedding, such as transportation or extra activities, I will recommend adding that information into your wedding website but maybe not into the formal invitation.”

Let’s check out what people have commented on the post: 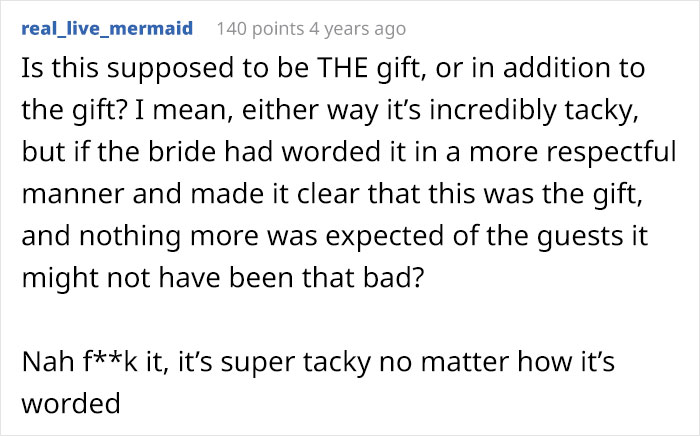 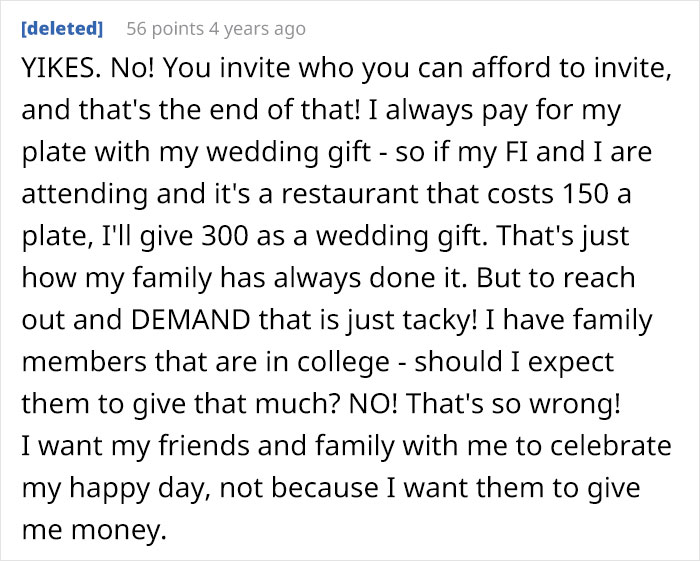 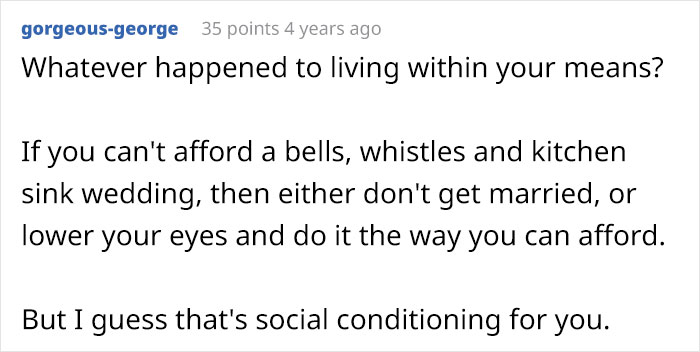 Some of the strangers also shared their weird wedding stories! 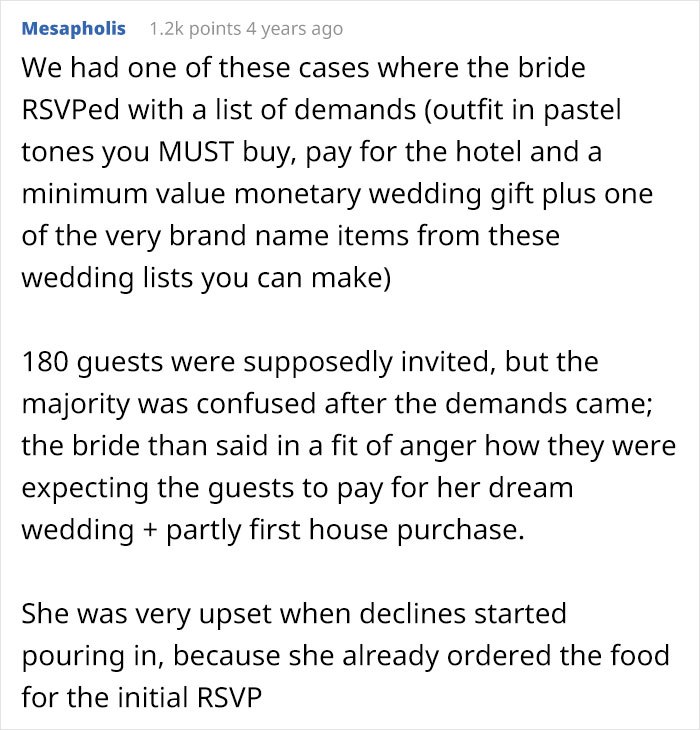 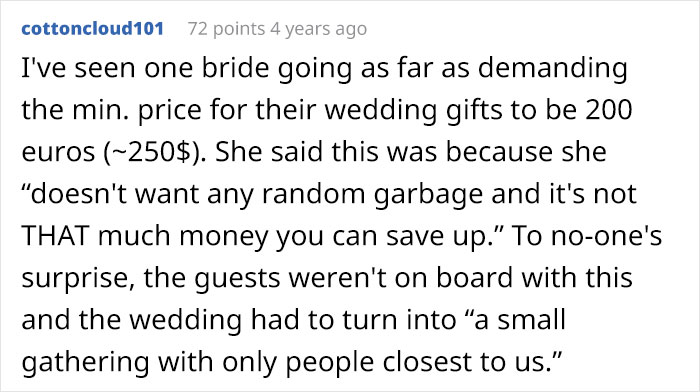 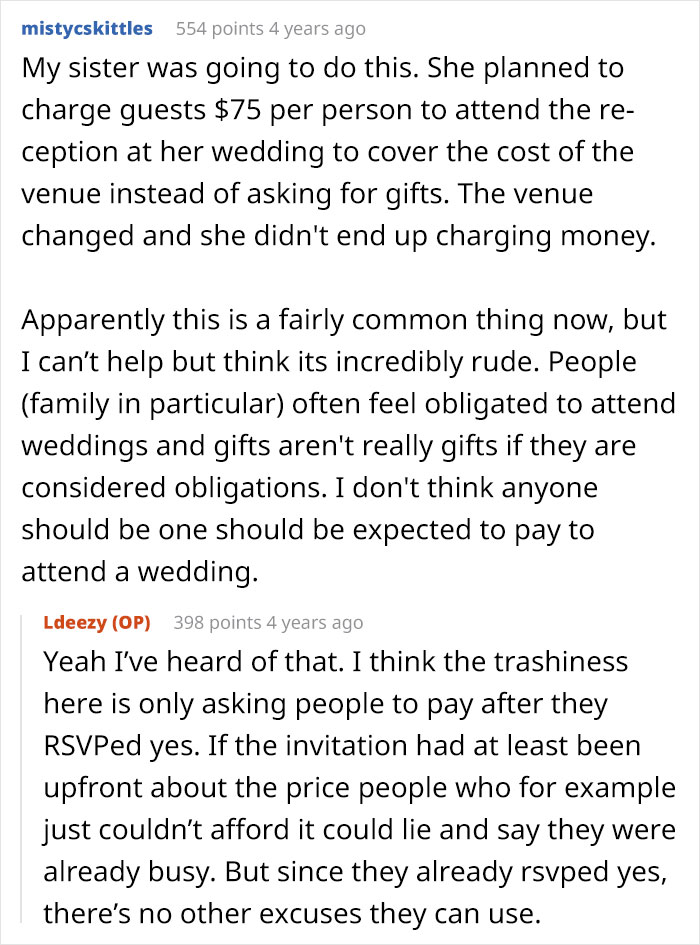 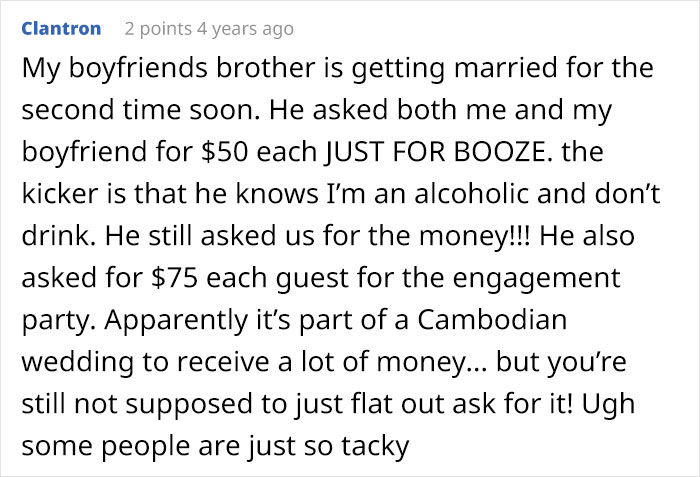 Have you ever received such a weird and ridiculous wedding invite? Let us know in the comments section below!