Marriage is a rollercoaster ride.

There are ups and downs in every single marriage. You can not expect things to always go smoothly. When we used to live with our parents and siblings, we would have arguments and quarrels every now and then. It is inevitable when you live with someone. Feelings of jealousy, anger, frustration, and grumpiness are completely normal. So when you get married, you are bound to have the same kind of problems with your partner. It is the couple’s duty to solve matters in a decent way. A healthy couple grows together and communicates maturely. Communication is key and each individual should be considerate and understanding.

This man on Reddit shared his story about his wife and him. They have been working from home and the man earns much more than his wife. After the wife complained that he does nothing at home, he told her that his job was harder than her’s. He then asked the Internet if he was wrong for doing so. Scroll down below to read the whole story.

The man and his wife have been together for ten years. They started their separate careers at the same time but since the pandemic, the man has been making three times more money than her.

The man’s work is different in nature. He has projects and deadlines while his wife works 8-10 hours a day.

He finishes his projects before his deadlines and spends his free time doing house chores and playing the Xbox.

The wife had been feeling jealous of the man as he had come much further in his career compared to her. 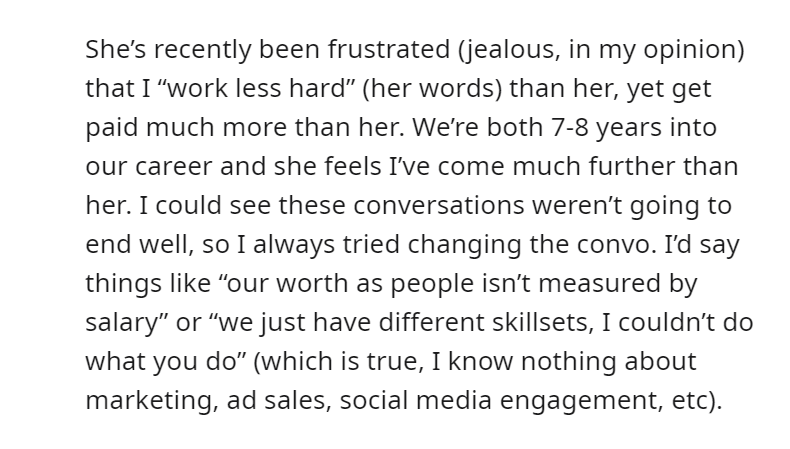 The wife constantly made snide comments about his salary and work, and the man finally snapped at her saying his work requires much more skills than her work. 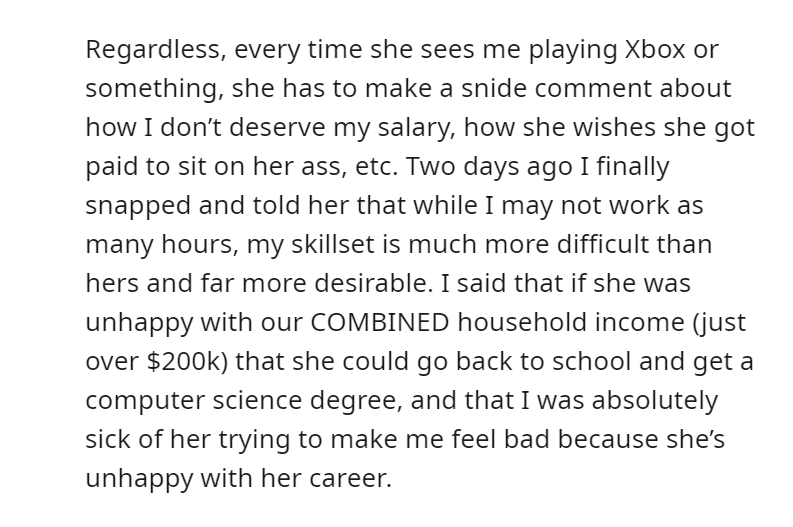 The man then asked if he was wrong for giving her a piece of his mind.

In my opinion, there is only so much a person can take. The wife has been feeling jealous and belittling his efforts by constantly saying he does not work and sits on his ass all day. Even though the guy went a little overboard when he snapped at her, but she had it coming. She should be happy for her husband instead of feeling jealous and being petty. They both need to communicate openly and sort things out in a mature way.

Some people took the guy’s side. 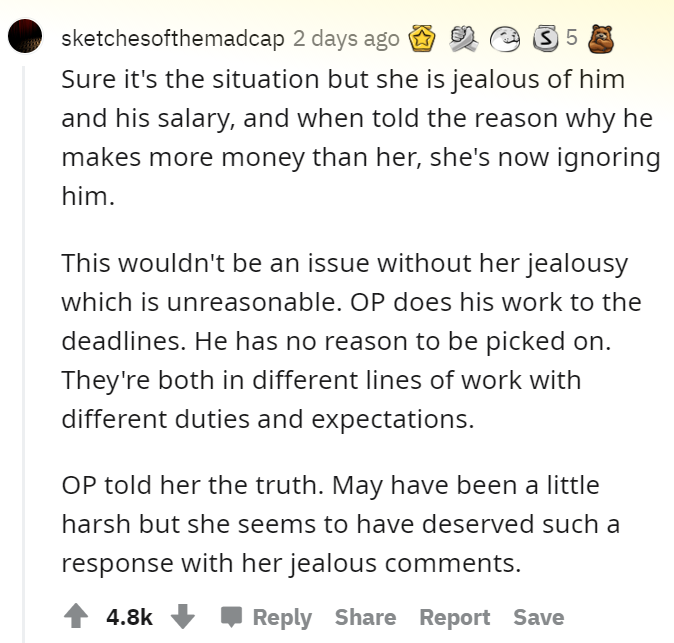 And a few users blamed both parties.

Some people said his rant was justified. 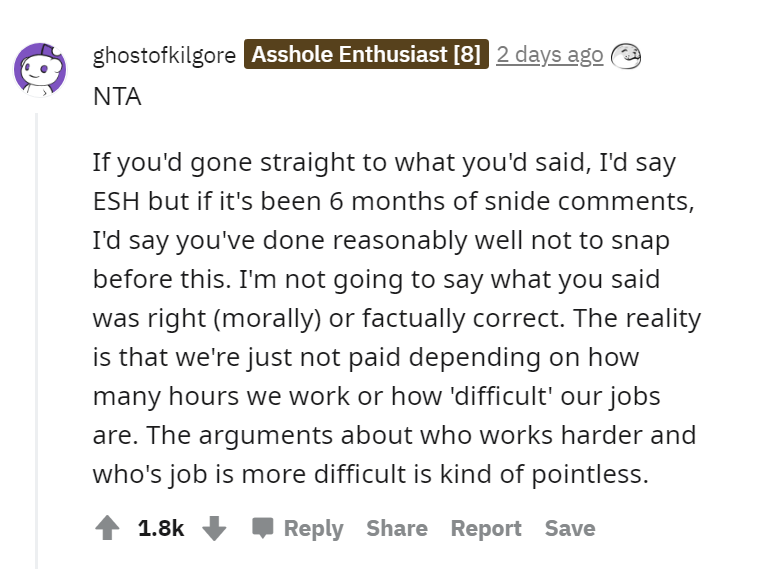 There seems to be a lot of manipulation here. 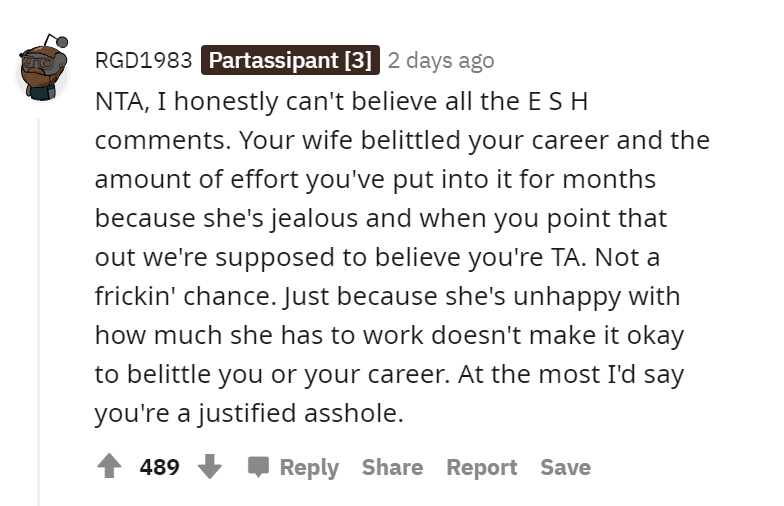 We can not control how we feel, but we are responsible for how we react. 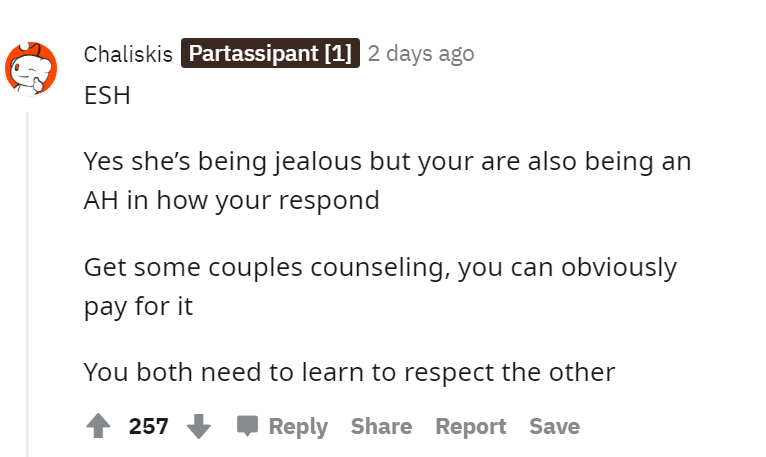 They both need counseling. 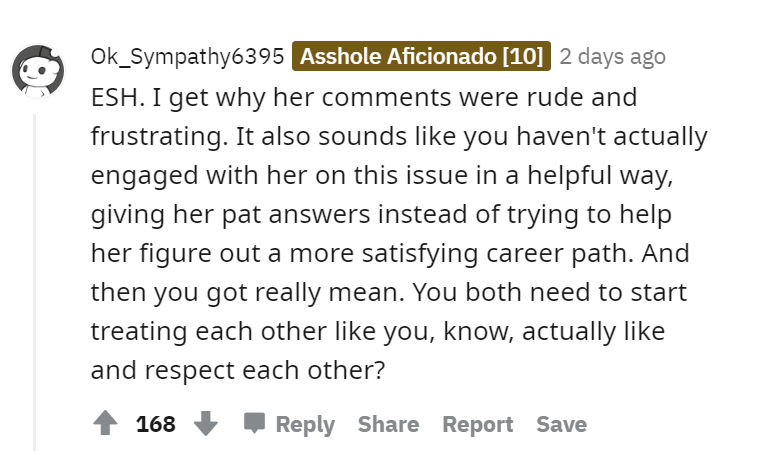 The guy admitted that they were both at fault.

Who do you think is in the wrong? Should the husband have snapped at her like that? Share your opinions with us in the comments below.