Ever seen a bird with blue-feet? No? Well, you’re about to!

Meet boobies the seabirds! Also sometimes know as Bobos. They are more commonly found on the western coasts of central and southern America. They usually nest on land at night like similar species but just as the daylight sprouts, they take on their ventures of the fish hunt. Blue-footed boobies are excellent divers, they spot their target fish on the surface, dive in the sea, and hunt them in the water.

These clumsy little creatures sometimes appear to be animated, considering the variation of colors present on their little body. Sharp silver beaks, perfect for catching and consuming fish. Yellow eyes, brown feathers, and bellies white as a dove. What stands out the most are, its bright blue feet, distinctive and catchy.

What gives their feet this bright blue color is a naturally occurring pigment known as carotenoids. The fish boobies eat are very rich in carotenoids. This pigmented once absorbed into their bodies gets accumulated in their feet. The greater the amounts of carotenoids, the brighter and bluer the feet would be. 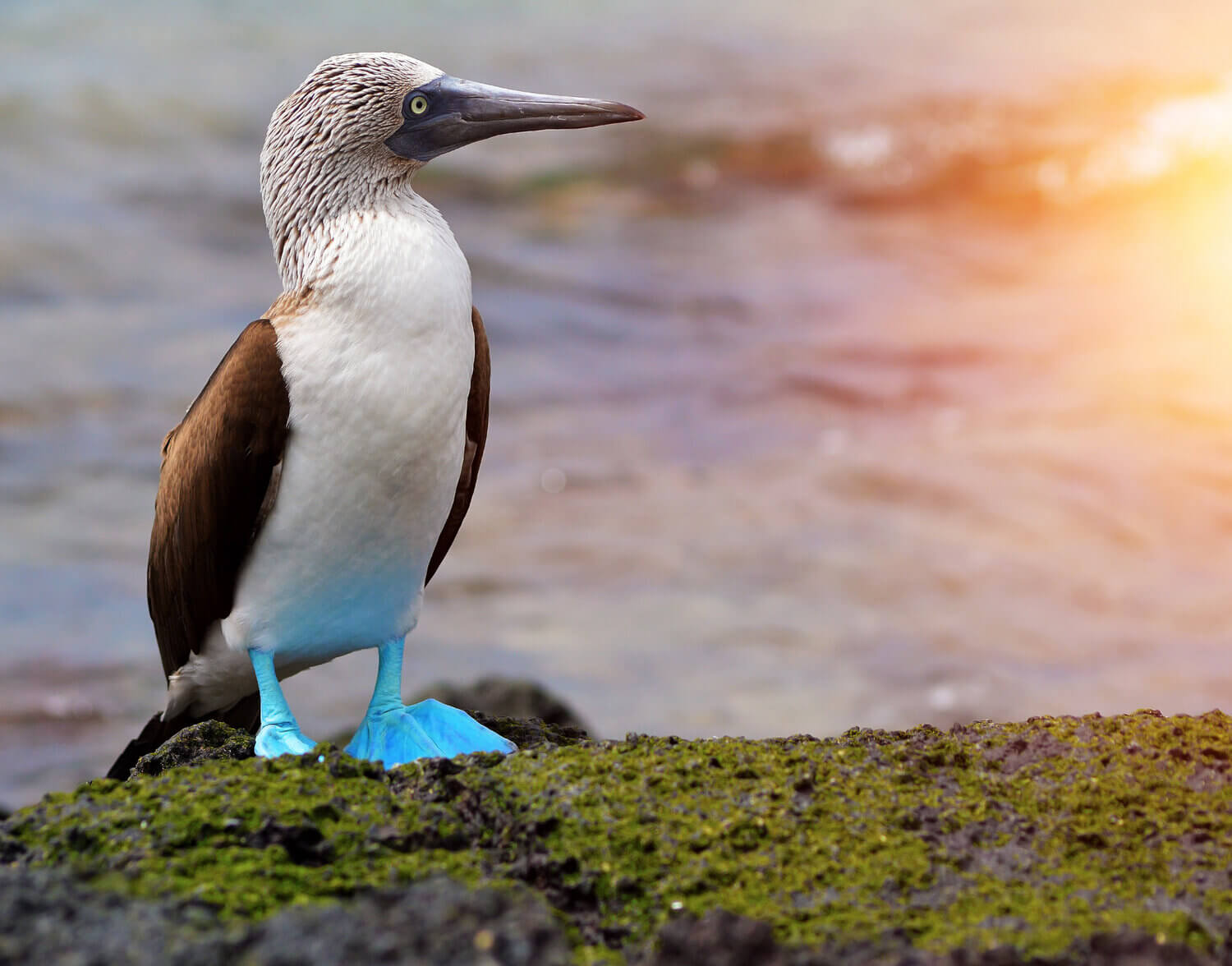 Who’s kids are these? 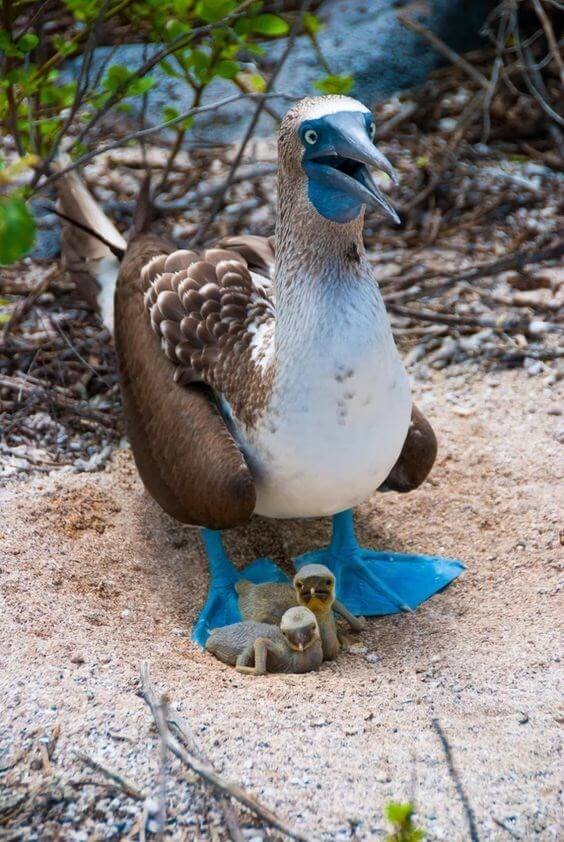 It has been observed that new hatchlings do not have their feet anything close to blue. It all depends on how well are they fed. Over time, if they are taken care of and well-fed with fish, their feet eventually start to turn blue. And as they reach their adult years they look similar to their parents.

Boobies mostly lay only three eggs at a time, so once they hatch it’s easier to look after the new hatchlings and feed them well. Once they hatch, both parents share equal responsibility of caring for their chicks. 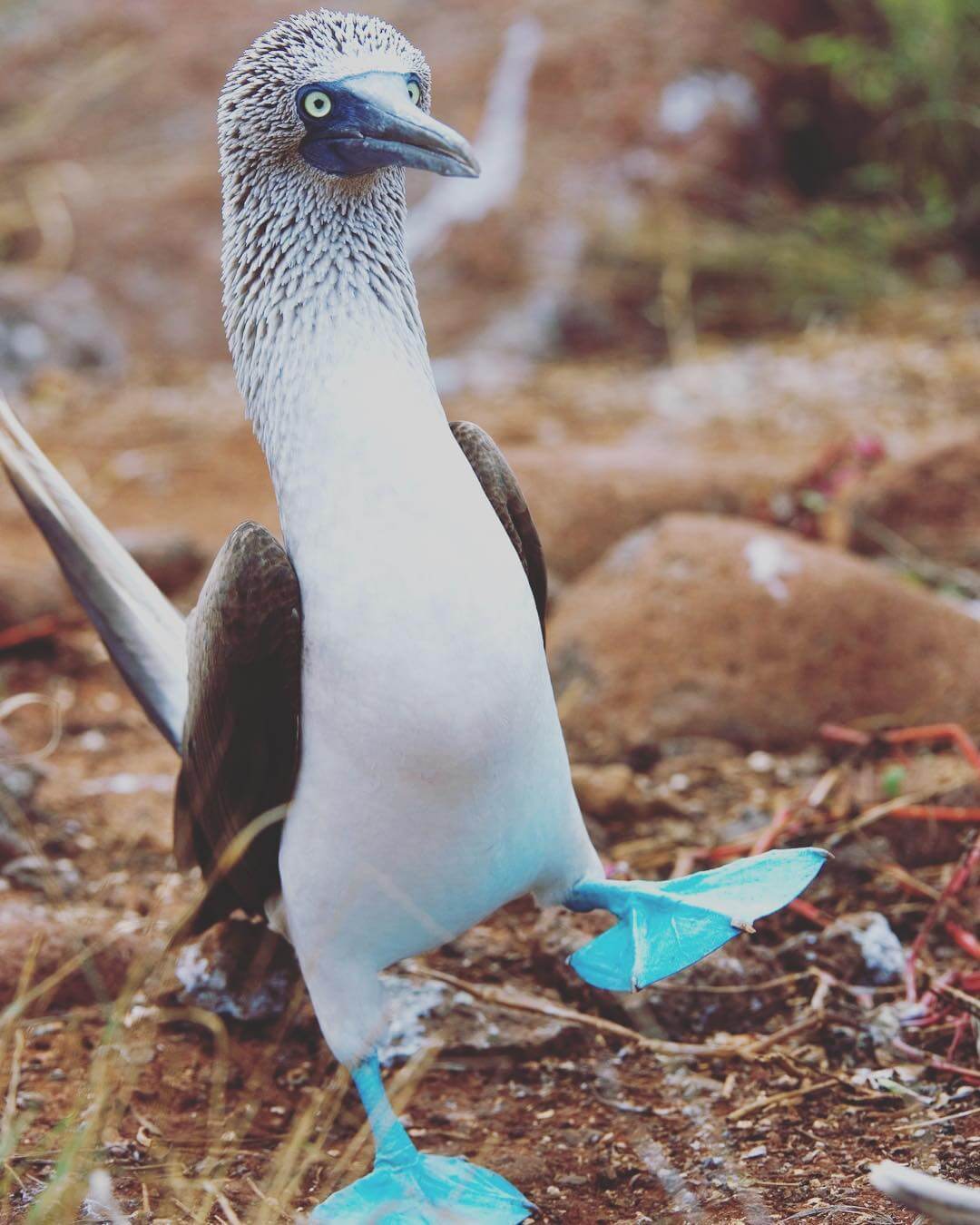 There’s no apparent difference in the features of male and female boobies. Yet, males take great pride in their blue feet. During the mating season, they specifically show off their bright feet with a high-stepping strut. The bluer the feet, more the female gets attracted. No pedicures just these prominent blue feet would do! 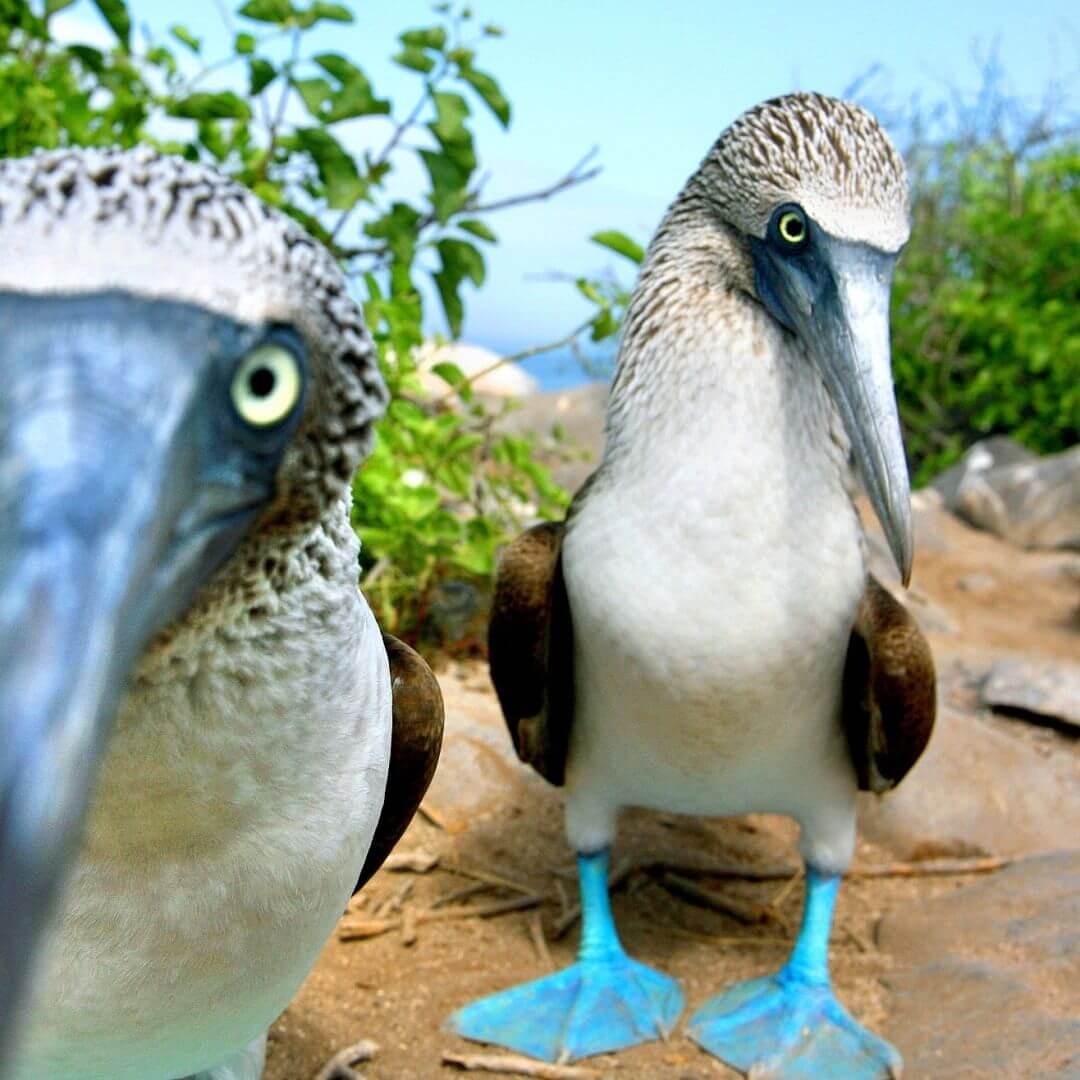 Hey, wanna go out on a date with me? 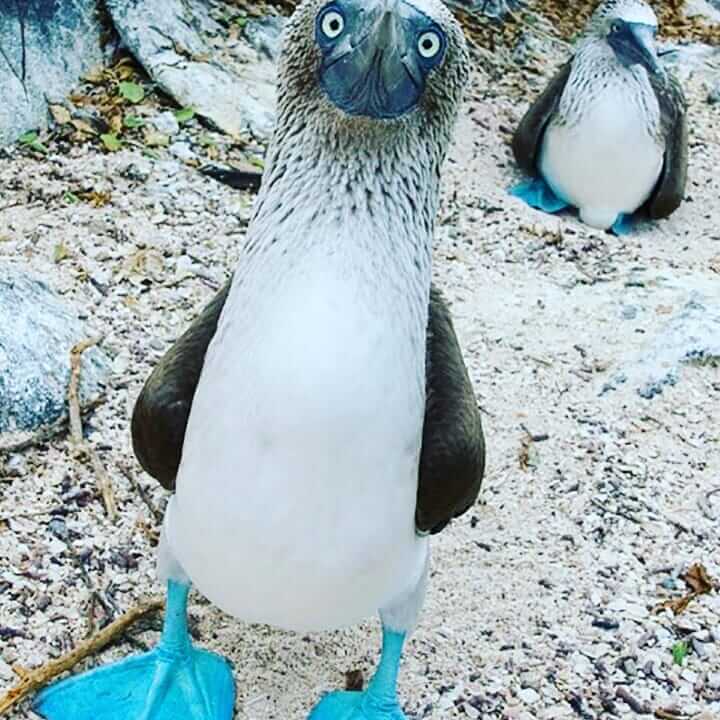 The Galápagos Islands is the biggest haven for these marine birds. Almost half of the total breeding population of blue-footed boobies are inhabitants of these Islands. 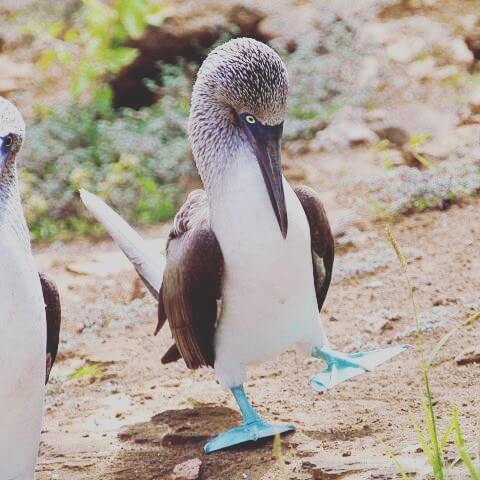 Hey, let’s move at the same time, shall we? 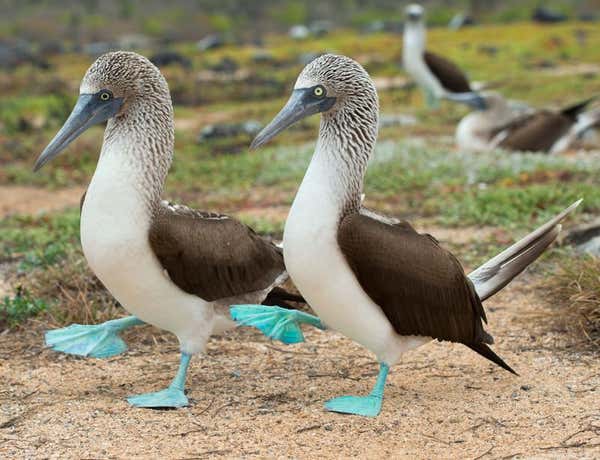 Like other birds, these too, like to stay and hunt in flocks. The female principally builds the nest on land when she’s all set to breed. The web-like feet help the female keep the eggs and later the hatchlings warm as well as protected. 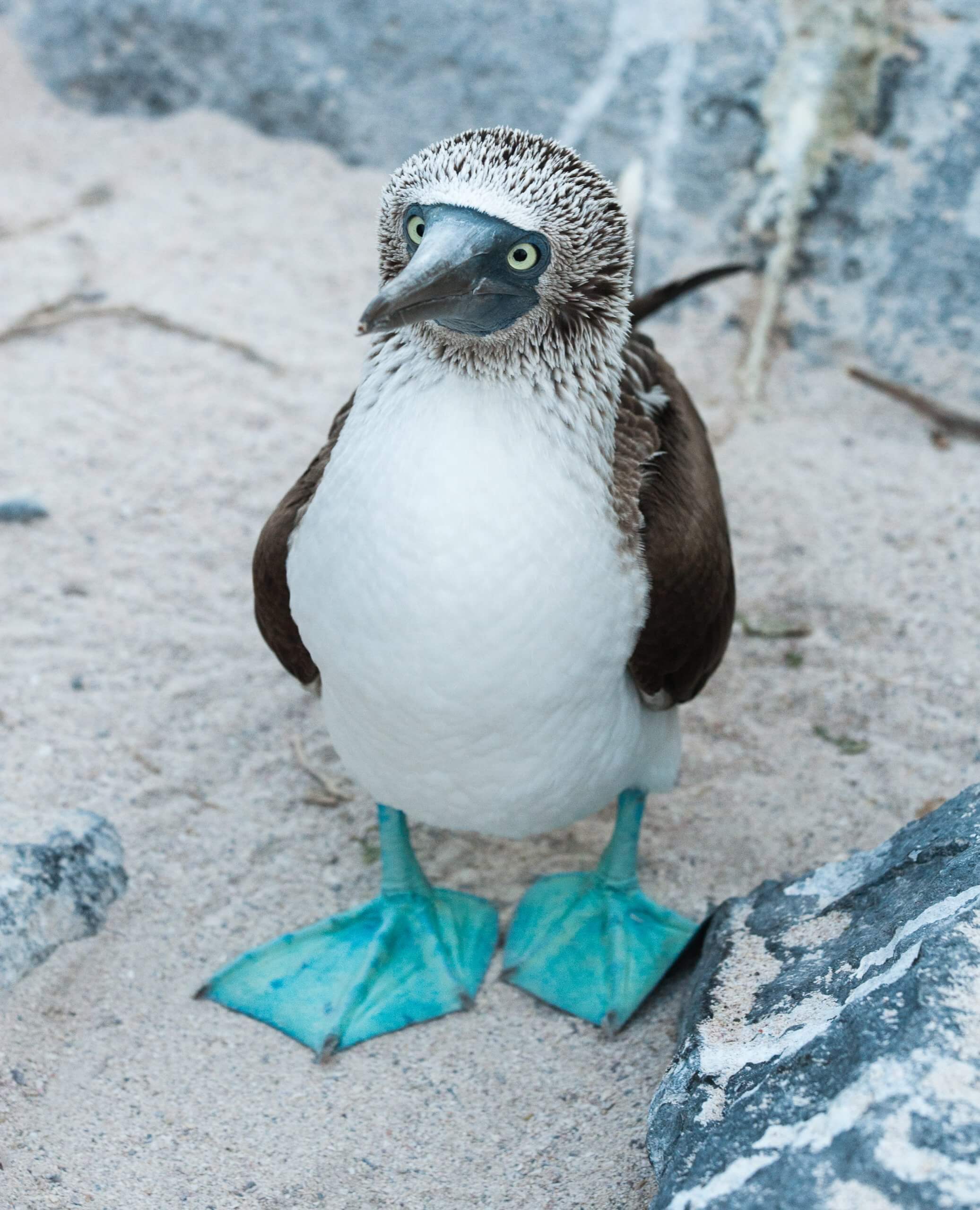 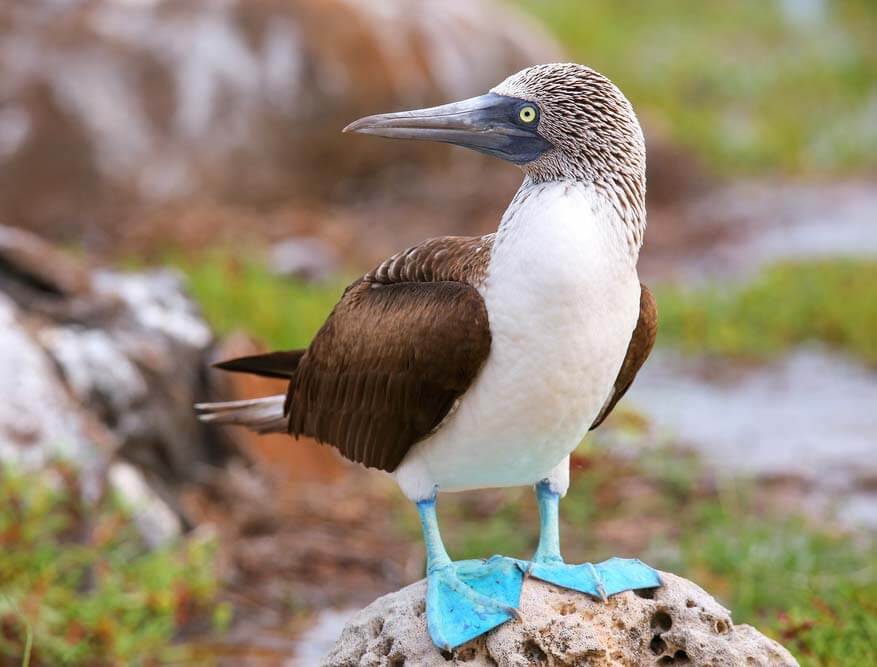 During the olden times, they used to unknowingly land over ships and it was pretty easy to hunt them down. Hereby European sailors named them ‘Bobos’ a Spanish word for stupid. They easily fell into traps and were consumed by the sailing convoys.

Interesting fact: These birds can live as long as 17 years! Usually, birds don’t have that long of a life span.

How interesting nature can be! There is so much to be explored and a lot has also been explored. These charming marine birds are surely among the wonders of nature. If you have ever spotted a booby, know a fact or two about them, make sure to comment in the comment box below!