Meet this Mandarin duck who is a magnificent bird. This creature is said to be the most colorful bird in the world. These birds are very photogenic as well as eye-catching. Scroll below to witness these beautiful creatures. 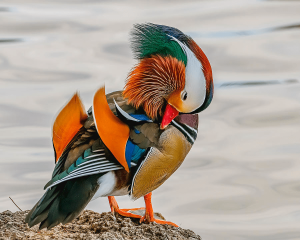 It is easy to explain why these birds are so beautiful they are born with a gift. Look at this awesome multicolored layers of feathers and a unique shape. Their face is orangish, with deep blue forehead and a violet chest. Uniquely, they have bronze sides together with blue-black and orange sails. The female is similar to the female wood duck, with a white eye-ring and stripe running back from the eye, but is paler below, has a small white flank stripe, and a pale tip to its bill. 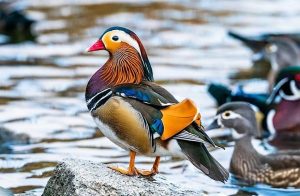 Along with the beautiful coat of feathers Mandarin ducks have a red bill, over their eyes there’s a white crescent and whiskers. These are the glamorous details that make this bird soo unique and special. 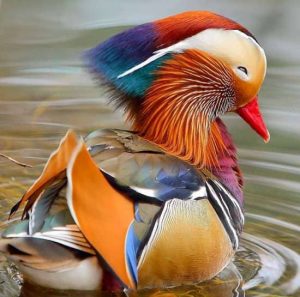 Like other species of bird, male and female Mandarin ducks differ from each other. As you can se female is duller than male Mandarin duck. Breast covered with little white spots, there runs another white strip from her eyes followed by greyish plumage. 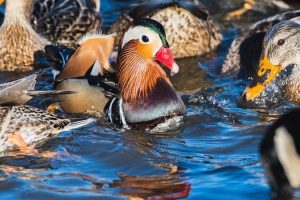 These beautiful ducks are native to East Asia. They are usually found in countries including Korea, Eastern Russia, China, Taiwan and Japan. They can also be found in UK. Their global population is estimated at around 65000 in numbers. 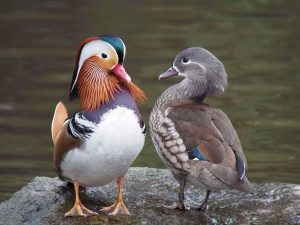 There is quite a history behind the distribution of this bird’s species. The word ‘Mandarin’ in the bird’s name certainly refer to the story about Mandarins. 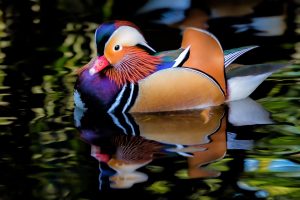 We are talking about 20th century when the Mandarins brought these birds over from China. But, interestingly, some of the birds escaped from there and built their own colonies. 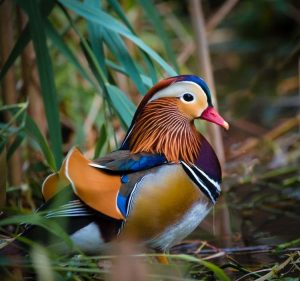 They prefer to live in dense and shrubby areas such as the edge of the river. Females also breed here during the breeding season. The bird lays nine to 12 white eggs that are incubated for around a month. 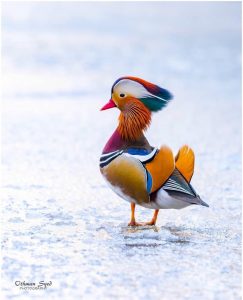 Mandarins feed by dabbling or walking on land. They mainly eat plants and seed. These birds will also add snails, insects and small fish to it’s diet. The diet of these birds changes seasonally. In fall and winter they mostly eat acorns and grains. 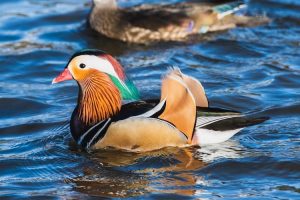 Population of these species has been reduced over the past years due to the loss of habitat. But they are not listed among the list of endangered species. 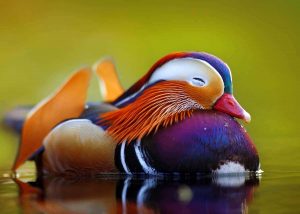 Look how beautifully this duck is chilling in the water. This is breathtaking. 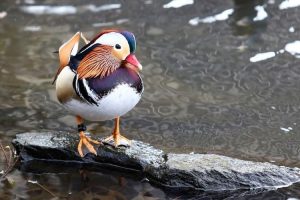 Female mandarins don’t quack, but they do make a series of clucking calls that are invariably uttered when they see danger, such as a hunting fox. 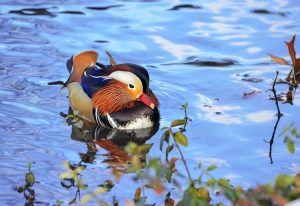 This Mandarin Duck looks so happy in water.T hese ducks are really eye-catching and such beautiful creatures to exist. Their multicolor feathers are their grace and they are quite glamorous. Aren’t they spectacular? Let us know how much did you like them. Share your thoughts in the comment section.