It is known to everyone that the world belongs to cats and cats only. This is not some top secret. We are just waiting for them to organize and take over. Do you ever wonder where your cat leaves the house in the middle of the day and comes back like she did not even leave? She probably goes to meet the cat army to plan how to take this plan ahead about taking over the world. While we may adore cats uncontrollably, we should also admit that we notice how mischievous and evil they act sometimes. They probably train together to be well equipped in criminal acts. If they are going to take over the world, they must know how to get involved in some action. These little creatures are criminal minds. That is the reason behind their selfish acts sometimes!

However, while our cats might have a hint of innocence to them, we found this one act completely guilt of the crime. She probably takes the lead in training all the other cats on how to commit crimes. And this is not some innocent cat moment, this involves actual violence, so forget about reading an adorable story ahead! This is not one of those stories. Keep scrolling to find out what we are talking about.

1. She woke up and chose violence 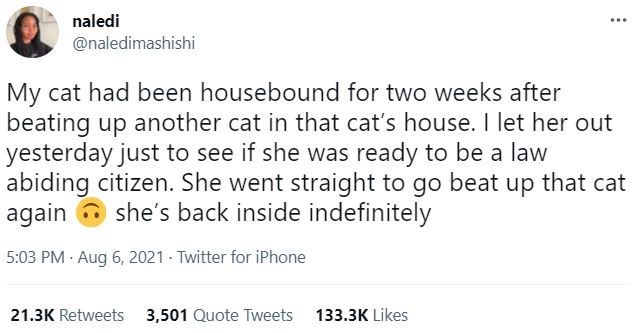 She woke up and chose violence. It is like this quote was rightfully made for this cat. She was patiently staying inside the house and the moment she thought she had the chance to beat that cat again, she immediately took it! She must have been thinking about beating that cat the whole time she was held captive in the home.

2. Menace in the neighborhood! 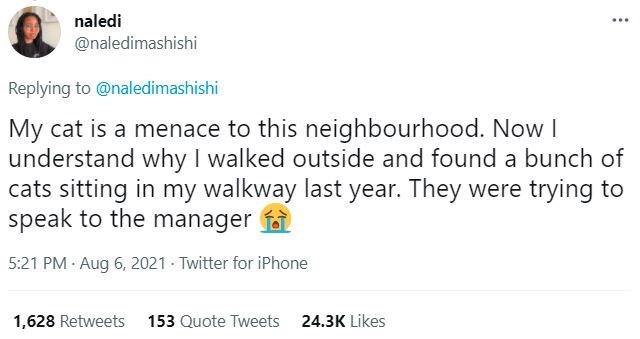 While this person is going through her personal hell, she also got some great humor. Impressive. But back to the cat! Damn, everyone in the neighborhood really keeps notice of who is spreading all the chaos. And these cats are not going to leave this woman until her cat goes away.

3. When you realize it is your kid’s mistake! 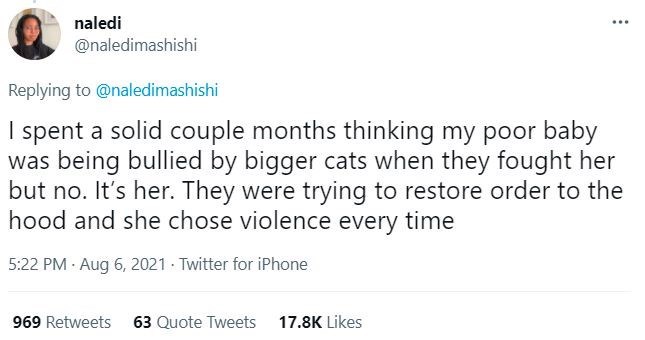 We always assume the best of our kids. We can never even fathom that it is our kids who are creating the mess. We find it so hard to believe that they started the fight at school and not the “other kid”. But sometimes, we have to get out of our little motherhood bubble and realize our kids ain’t always saints in the situation. Sometimes they are the problem! And in this case, the woman’s pet child was surely the problem. And the poor even got manipulated by the little evil cat to believe she was not the problem in this situation.

We gotta do what we gotta do, girl. Do not feel guilty about the evil doings of your cat. You were just saving everyone from more chaos! 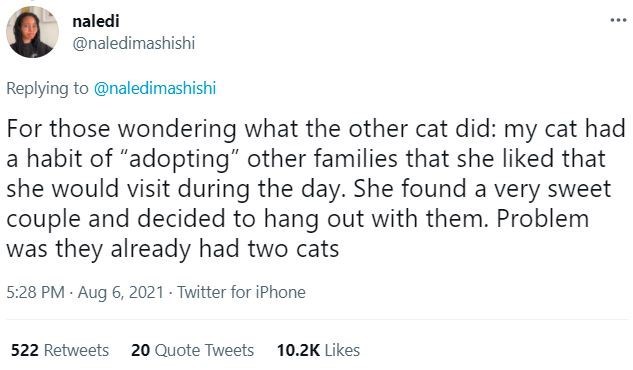 So it all starts from friendship, guys! It is surprising to know this cat is capable of forming friendships. We were beginning to think she was created by the higher entity to spread only chaos. But we are noticing a pattern. I think she only likes humans. When she is in her own house, she does not create any mess. She goes out of the way to become friends with other humans. It is the other cats she does not like! 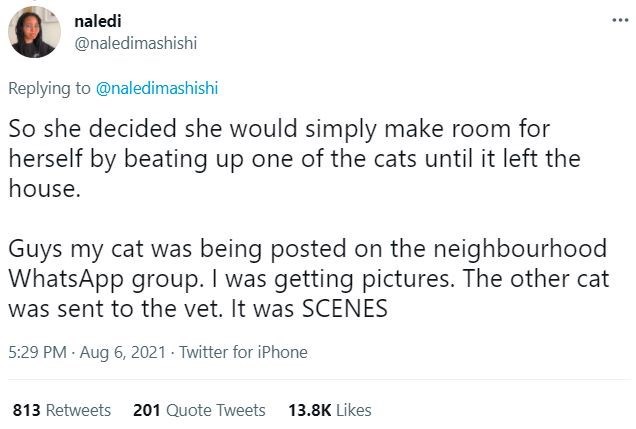 There should be a TV show for the cats and this story should be in the pilot episode. I cannot believe the cat actually conspired to get the other cats out of the way so she could spend time with her new humans. Speak of being territorial! The other cats were being forced out of their own house.

Damn, the cat’s plan just got ruined! But we all know how cats are. No matter what acts they pull and how wrong they must be in the situation, they will never feel even an ounce of remorse. And in this case, we all know this cat does not give an impression she feels guilty at all. She literally tried to fight two cats to force them out of their own choices.

The poor woman has to deal with a criminal at home.

9. The face behind the chaos 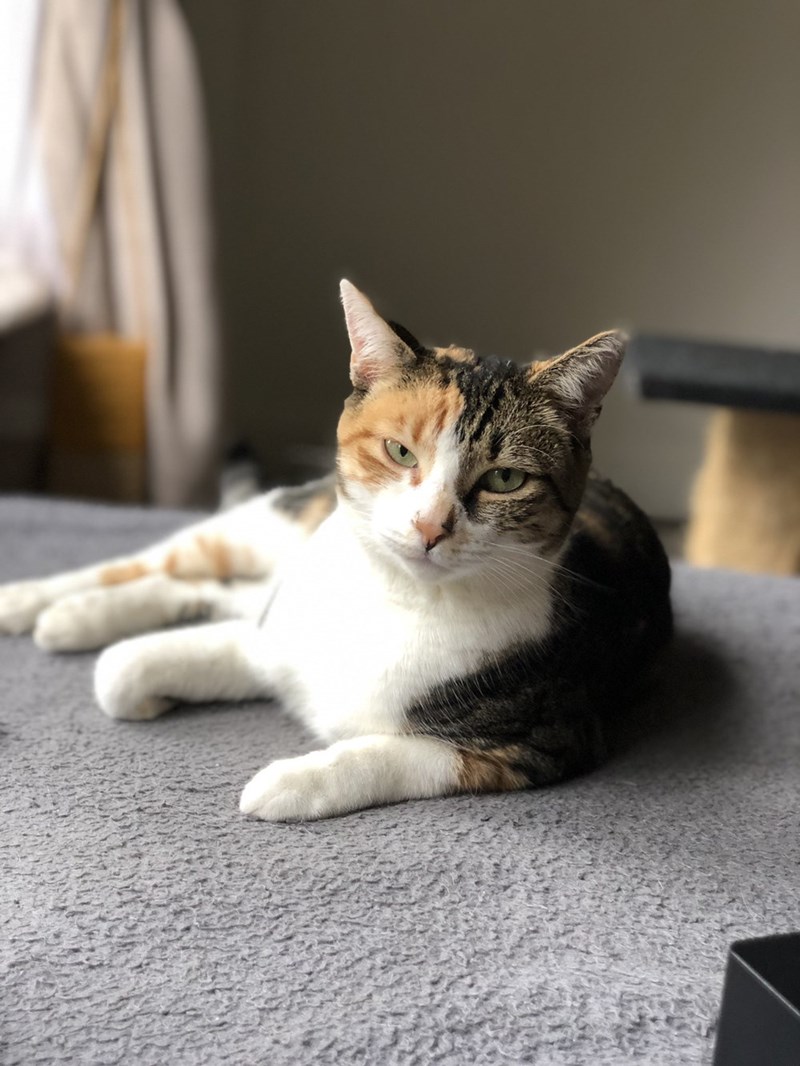 So here it is, guys! The moment we have all been waiting, to see what this cat looks like who has become the hot topic of discussion. Her eyes scream chaos and evil. Her eyes are telling us how annoyed she having to stay inside the house all the time. She really wants to fight some irrelevant cats outside! 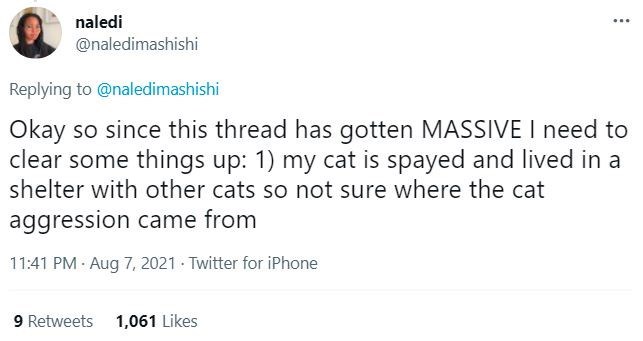 It keeps getting curiouser and curiouser! Maybe we should check in with the shelter managers and confirm with them whether this cat was aggressive during her time at the shelter or not?

11. Bear with my attitude or leave!

We are living for the cat! Those shelters must have been the place where she got all of this gangsta look.

A peace treaty was made and the neighbours were ensured their cats will no longer face violence and aggression from the other cat! It came with the price of keeping the wild cat inside but, there was literally no other option, right? I am just glad the neighbours did not try to sue this cat owner. It is also so good to hear the injured cat is now healthy and well. It really breaks a cat lover’s heart to know a cat has been hurt.

Wow, that was quite a full ride. Only if there had been a video of this whole dram that took place in this particular neighbourhood of Southern Africa. We need to be alert about the dangers wild cats can subject our innocent cats to. What really is impressive is how responsibly this person handled this situation. Most pet owners do not realise their pets could be a serious threat to other animals and blindly trust their animals. Jokes aside, the other cats were seriously injured. If you truly are an animal lover, you would want all the animals to remain safe and secure. Your love should not only apply to your pets. It goes for all the precious little animals that exist in our world.

Have you cats ever gotten into such heated situations? We really hope not because this situation does not look pretty from afar, so we can only imagine how bad it would have gotten for those who were witnessing it. But let us know if you do have any such stories to tell!