Two loving sisters raised each other’s kids. And, they are cats!

Cats. What comes to your mind when you hear this animal’s name? Cute? Beautiful? Furball? Scratch marks? It’s all of the above! These adorable creatures are a delight to have around you. Against a trade-off of having a couple of scratches here and there every now and then, you get a fluffy cloud you can cuddle with, you get free licks of affection, and they are ready to fetch mice for you as well. And the bond between these animals, when created, is almost impossible to break. The love and affection between bonded cats is an example set for everyone.

Here is a story of two cats that are bonded together forever: Maple and Willow. Maple and Willow, sisters to one another, have been striving next to one another from the very beginning. This Is more of a survival story that only depended on the strength of their bond. Maple and Willow were pregnant and under the ownership of a person who was not too caring and the cats were living in a very surrendered environment. But no matter how sore the conditions, the two cats never left each other’s side. Just admire the two cats enjoying the serenity of the moment. They really are inseparable!

All thanks to Kyndra, the foster mother, for capturing these beautiful moments: | Instagram | 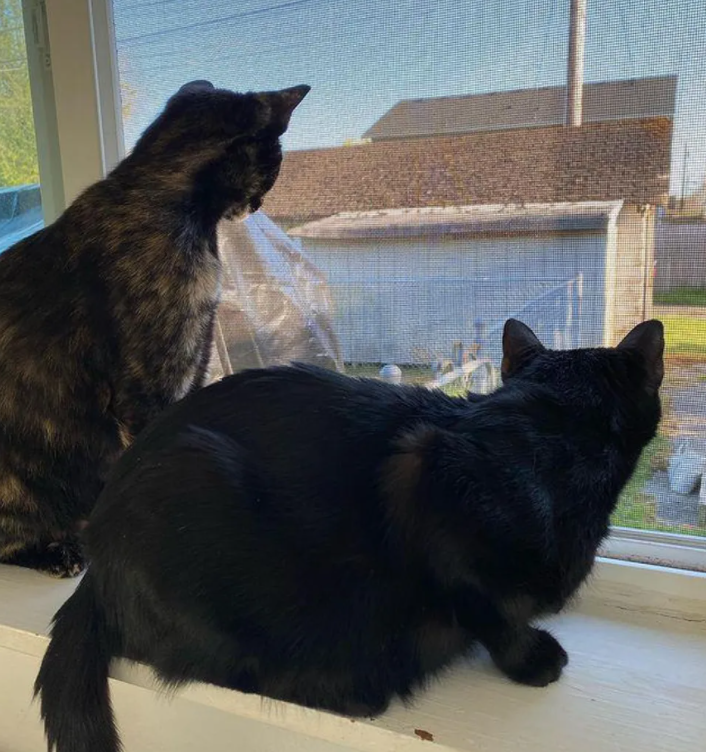 And eventually, their lives took a turn when they were brought into the Purrfect Pals Cat Sanctuary in Washington. The same night the sisters came in, they gave birth to 8 gorgeous kittens. Who knew these kittens would be the sisters’ lucky charm moving into the future? The Purrfect Pals Cat Sanctuary said that as soon as the kittens were one day old, they were taken up by a very loving and experienced foster mother.

Kyndra, an experienced foster woman, came to the cat’s rescue.

And it felt like it was always meant to be this way. She was quick to notice the bond between Maple & Willow and how they would always share and have a natural consensus over everything. 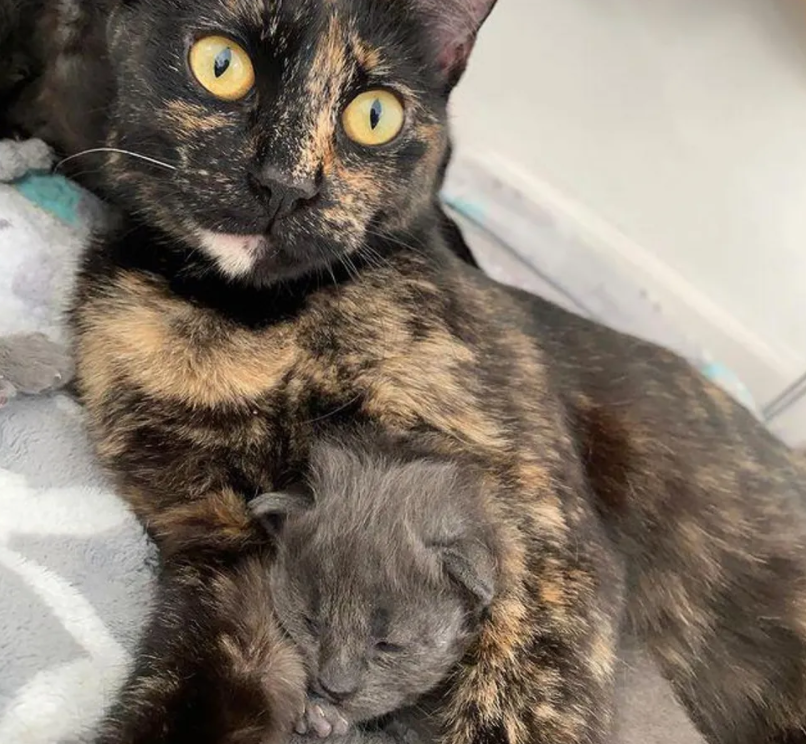 Kyndra captured this perfect moment of Willow cuddling her baby kitten Rowan and showing how much she admires them. This all melted Kyndra’s heart and made her admire the cohesion between these cats. She said that the sisters helped each other at every point to raise their kittens and they did it together every time.

Once the cats and the kittens got familiar with Kyndra, she decided to move them into a new shared space.

The mothers enjoyed their new home equally as much as the little kitties did. 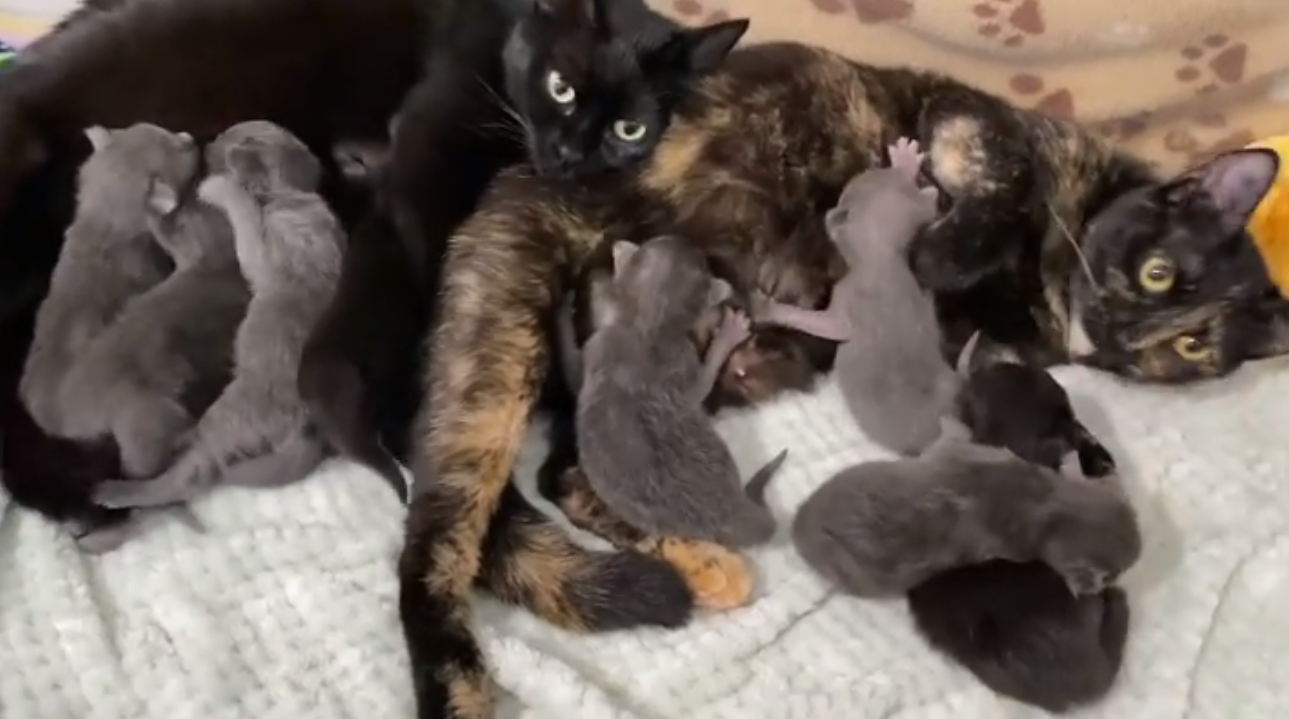 This photographed moment purrs (see what I did there?) you in awe! The kittens look so happy in the new space and the satisfaction on the mothers’ faces is worth dying for. Look at that one kitty at the bottom right of the picture, she is sleeping on top of her baby sleeping. CUTE!

As time passed, the kittens grew more aware of their surroundings, which allowed the two best friends, Willow and Maple, to take some “self-time” off which allowed them to sit in peace and catch up on things. They have feelings too, after all.  Kyndra did state that not once the two sisters were unaware of their kittens. They would run to their babies as fast as they could as soon as they would hear a single sound coming from their room. 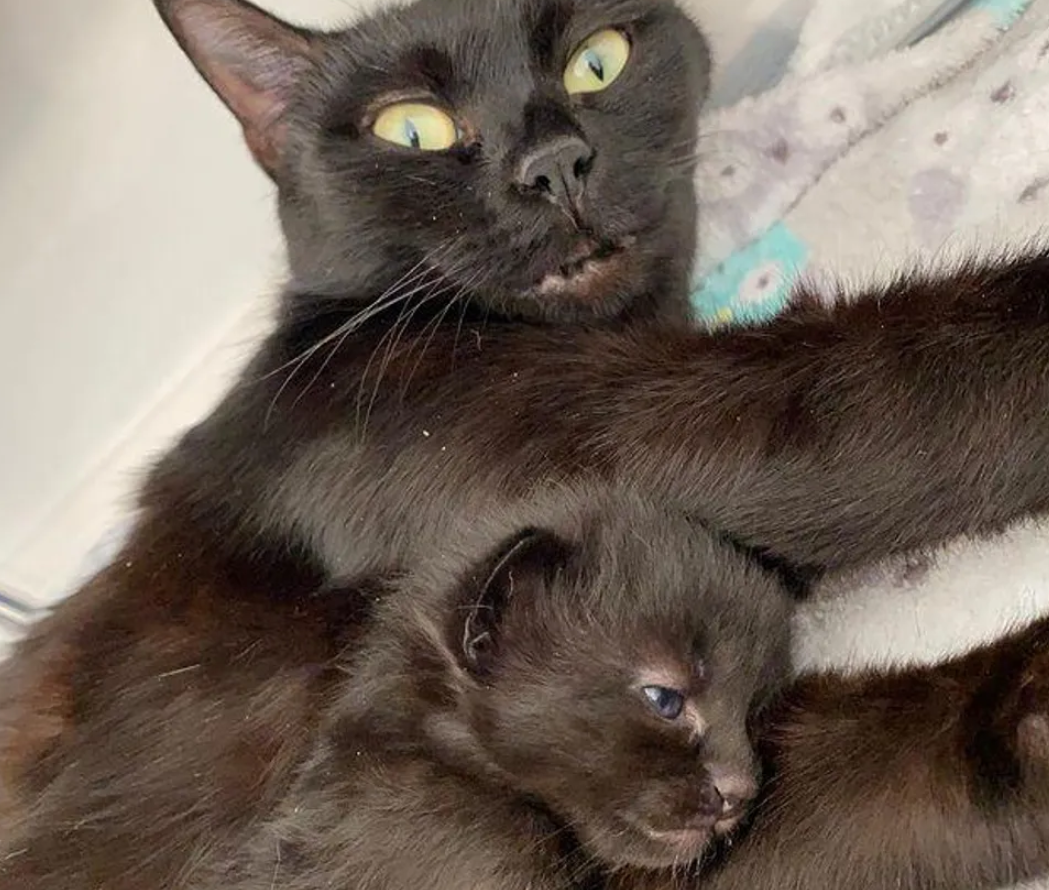 Whenever the kittens are tired and exhausted after playing too much, Kydra makes them lay down together as they all cuddle up.

That creates such an amazing and beautiful moment and frame to look at as the kittens rest peacefully. And all of this is owed to the undivided and unconditional love from their mothers, Maple and Willow. The strong bond between the two sisters has allowed the kittens to bond among themselves as well, and they truly deserve this kind of divine happiness for the rest of their lives. 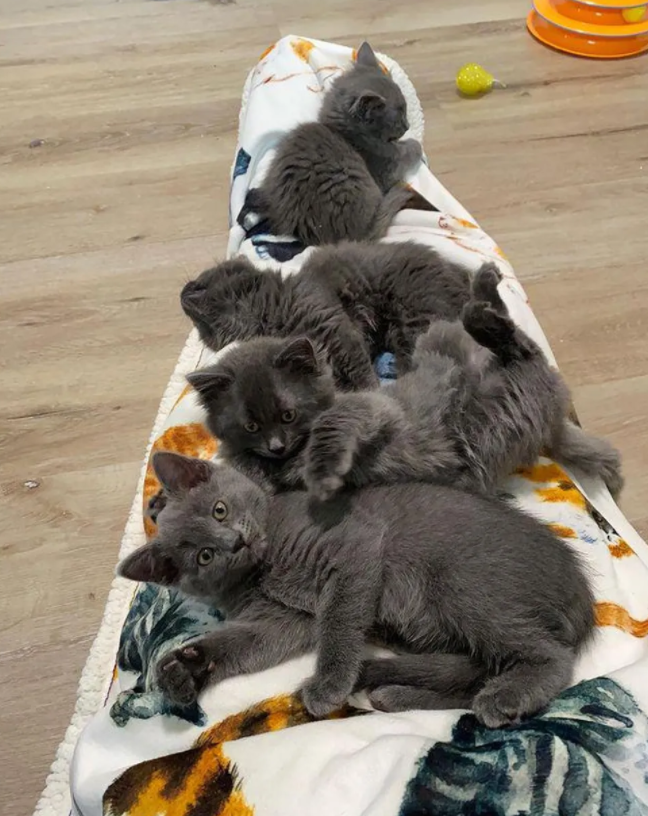 Out of the 8 cute kittens, Ash, Oakley, and Sage lay on Kyndra’s lap. Meadow, Aspen, and Ivy usually lay somewhere nearby. And Juniper and Rowan are the 2 introverts of the gang who like to like to sit in their own bubble and get energized through their own lone thoughts.

With time Maple, and Willow got familiar with the household routine as well.

They know exactly when Kyndra has prepared the food for them and they would run and be already prepared as if they are in some hotel. And the bonding plays a role here too. They literally share everything. Even the portions of food that they eat are the same. The pure and natural understanding between these two cats is what has allowed them to raise such beautiful kittens who share the same bond among themselves as well.

According to Kyndra, when these cats start playing, they find the liveliness of the moment so distracting that they leave the Willow & Maple family alone to enjoy their family time.

Maple and Willow have taught a lot to the kittens as they have grown 10 weeks old now. The transfer of knowledge was an absolute success as the kittens enjoyed the learning process and now know all the tricks that the mothers had up their arsenal. The kittens get to spend more independent time which also makes the mommas spend more independent time. The best friends, too, like to play with all sorts of toys and chitter chat all day long. 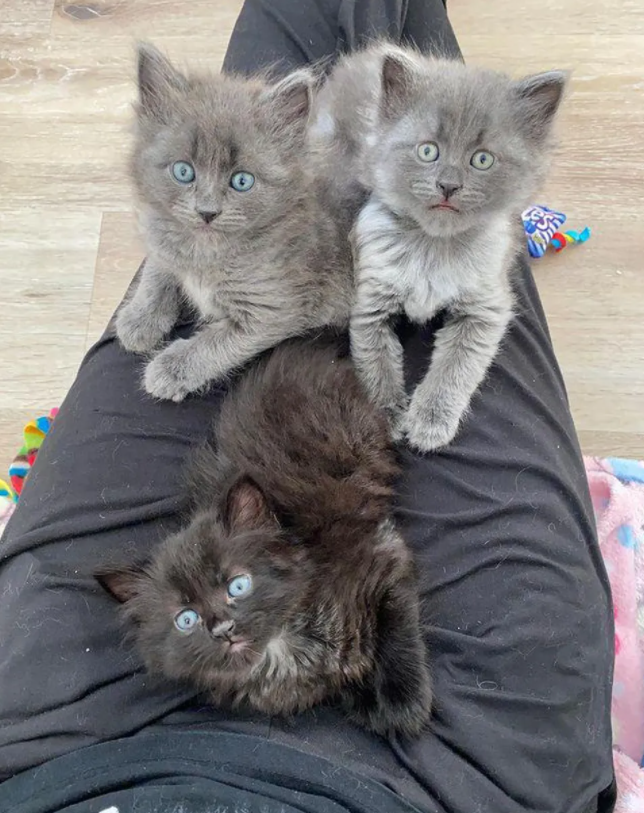 Kyndra said that that she observed how Willow is far more into Maple than Maple is into Willow.

Willow likes to put in that cute extra bit of effort needed to keep the bond sharp, cohesive, and stronger than ever. But the major talk of the whole show is that they both are really dear to one another and this unconditional love will keep them together forever.

This strength of the bond between Willow and Maple made Kyndra and the whole foster family decide that both the cats will be adopted as a pair once they are ready! We think that is the perfect way to pay gratitude to these best friends and fulfills Kyndra’s wish of keeping the two best friends together forever in any condition.

Look at the following video of the sister cats showing love and affection to each other.

I think Willow gave in a couple more licks than Maple!

I believe we all are really lucky to have witnessed a bond so strong between these two cats that actually evolved into a family.

And they did that together. This shows that the severity and attachment of such relationships still exists and if two un-related cats can implement it, we can too. In the tough times of the global pandemic we are in today, it seems almost necessary to allow such bonds to form among us, help each other survive, grow into a better version of ourselves, and we thank Maple and Willow for teaching us a positive and beautiful lesson. And Kyndra too. Without her efforts and bravery in taking up the 2 cats when they needed utmost care, this would not have been possible. And we are absolutely sure that the cats recognize her efforts as well. 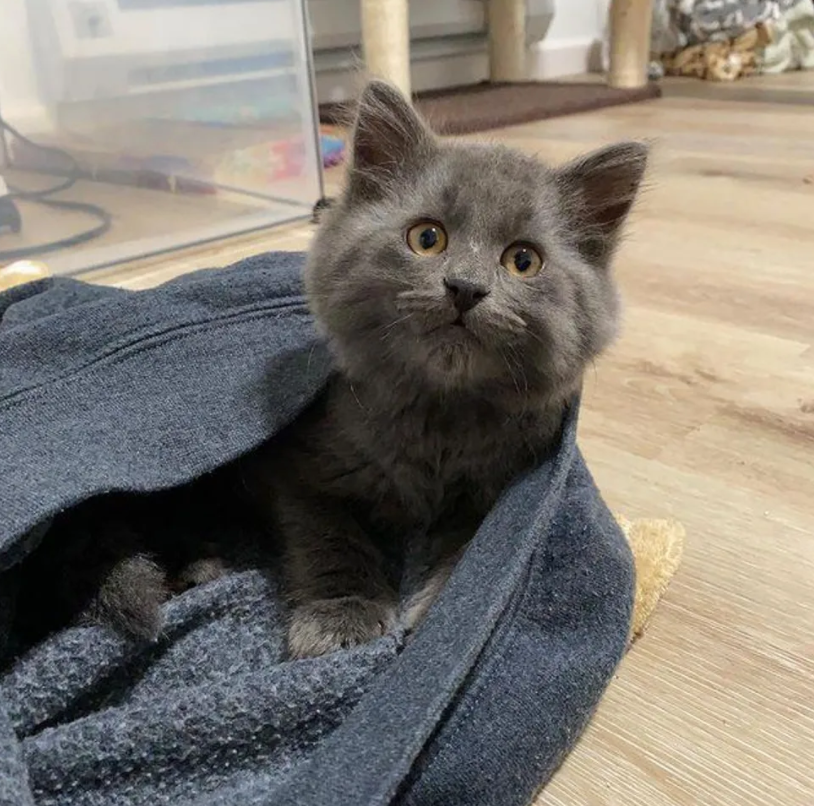 We believe this picture of Ash sums it all up. She looks so satisfied with where she is right now. Laying in a cozy blanket and smiling for a photograph captured by Kyndra, her foster mother. This goes to show how the kittens love the environment and they do owe it to the affection of Kyndra and the foster family, and the bond and unbeatable love from the two best friends in the world: “Sisters Maple & Willow”

We think “Mallow” is the perfect ship name for the two. What do you think? Let us know in the comments down below. We hope your hearts got melted by this story as ours did too. Let us know what you thought about this bond, and what message do you get from this perfect story of bonded sisters living in harmony.