Every buyer has a right to see the final product before paying the full amount.

When you are buying a product or some service, you should check the final product before making the payment. Amber Trucke, a client who hired a remodeling company to fix her shower, had no idea that her remodeling service would turn out to be a nightmare. She hired the contractor and they told her that the shower will be renovated in four days but they took two weeks and didn’t do the work according to her expectations. The contractor asked for the full payment even though the work was still pending. Amber told them that she will pay after looking at the final product. Scroll down to read what happened next.

1. This contractor was hired to remodel the bathroom but soon after remodeling, he smashed it. 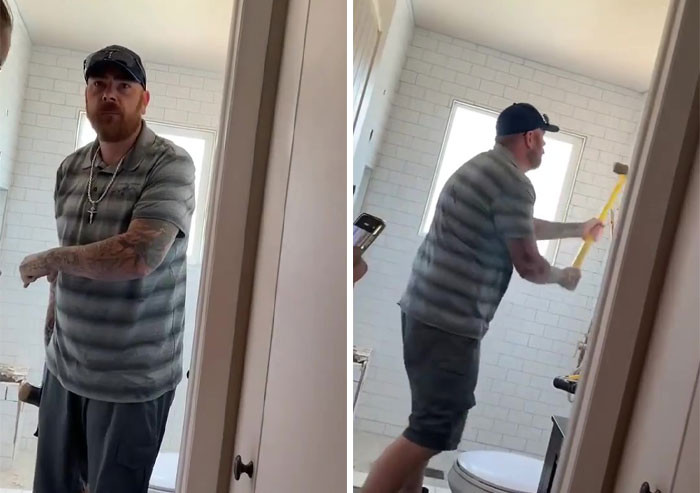 2. But what made him smash the bathroom? 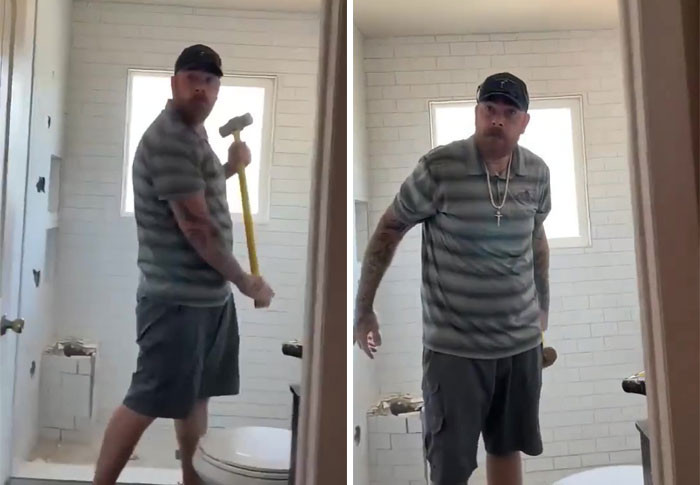 3. This is the client, Amber Trucke, who sought the bathroom renovation services from Dream Home Remodels. 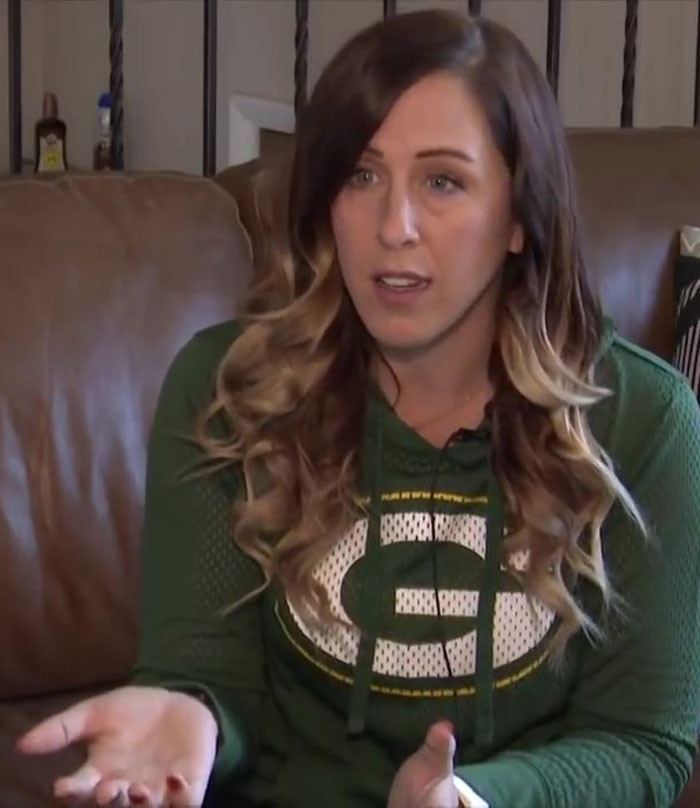 4. Amber did not pay the full money and wanted to see the shower first and pay the rest after seeing the shower: 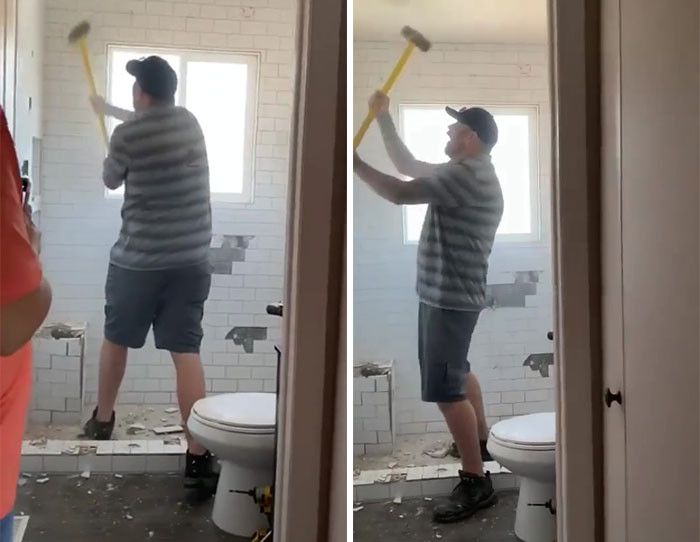 5. The contractor got made after hearing this and smashed the bathroom right away:

6. This was the conversation that happened between Amber and Dream Home Remodels. 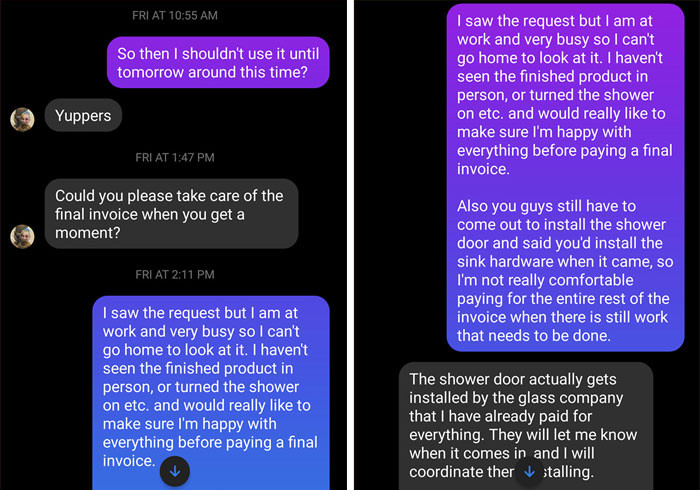 7. The contractor told Amber that they want the payment by the end of the day but Amber was not happy with it. 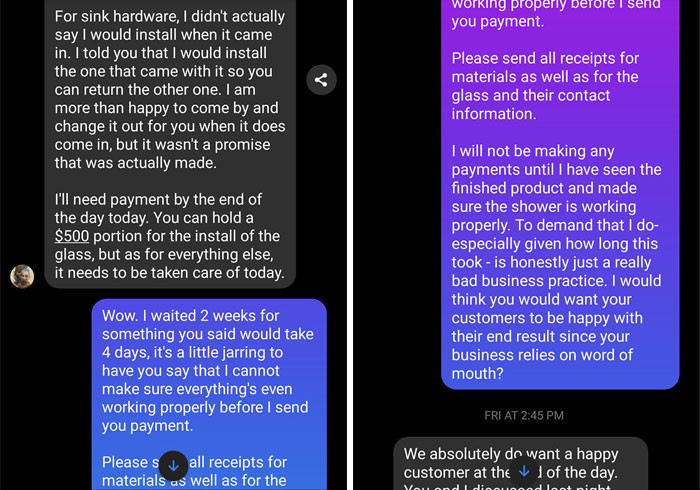 8. The contractor refused to provide receipts to Amber but Amber still wanted to see the final product before paying the money. 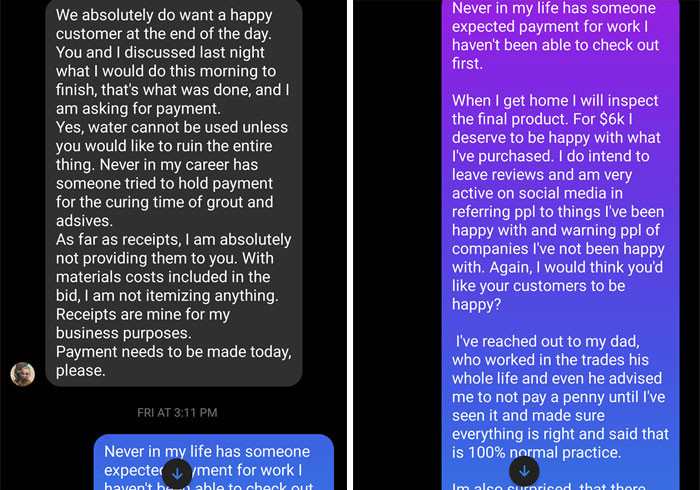 9. The contractor wanted Amber to see the product by the evening but Amber stood on what she said. 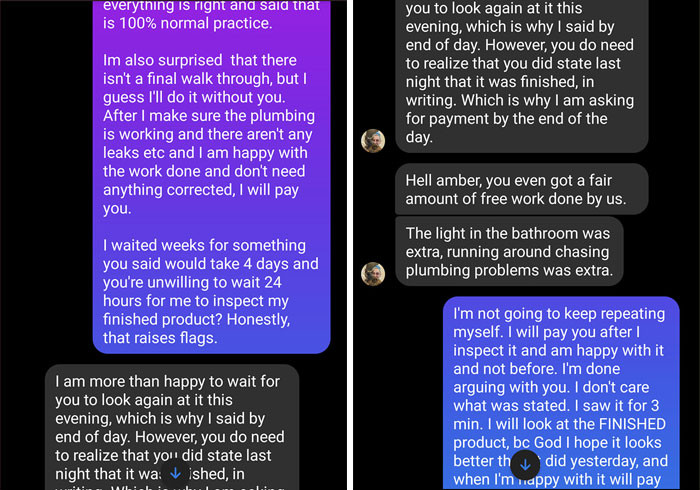 10. Amber stated all the issues she had with the contractor. 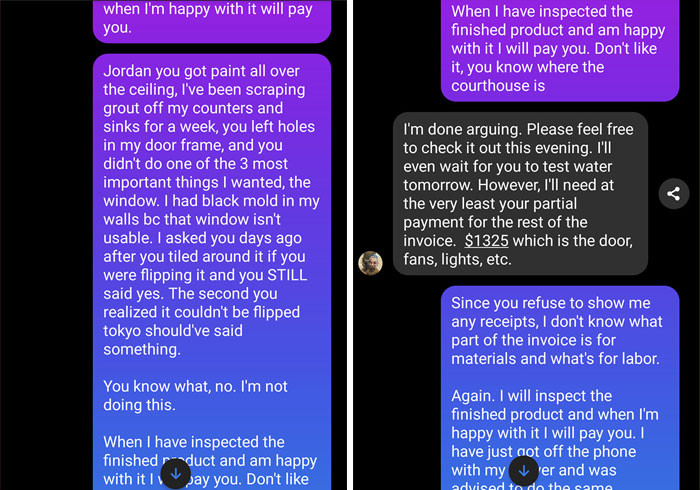 11. The contractor had no proof that they ordered a glass door. 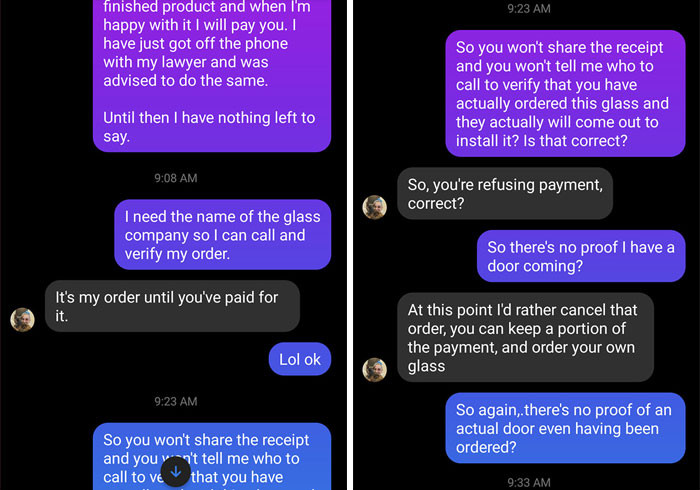 12. The contractors entered Amber’s house without her permission and Amber called the police: 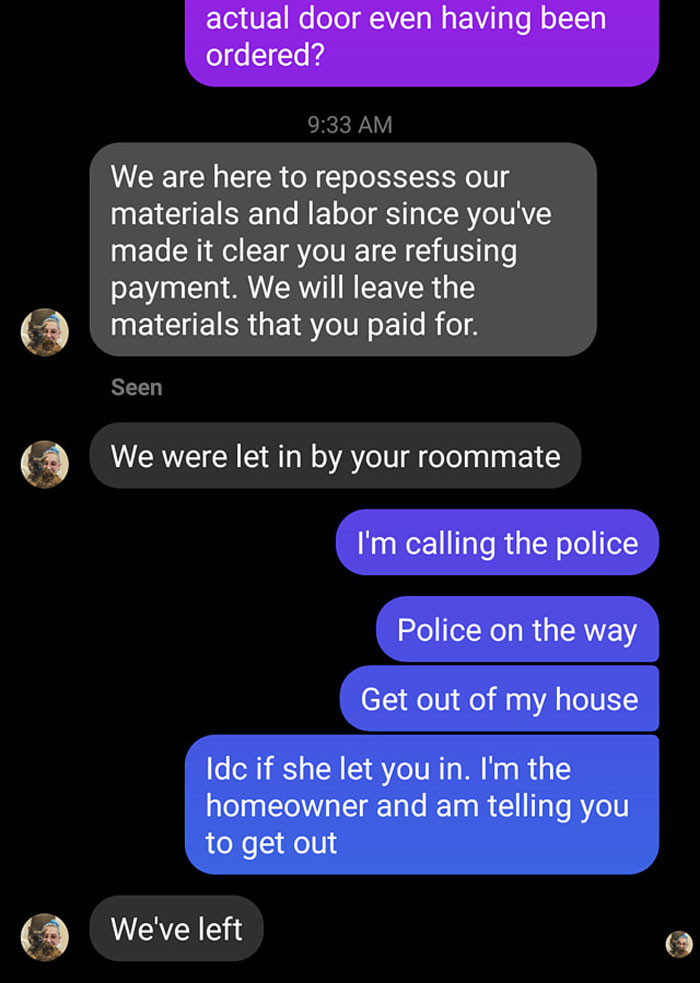 13. These were the photos of the bathroom taken by Amber after renovation was done: 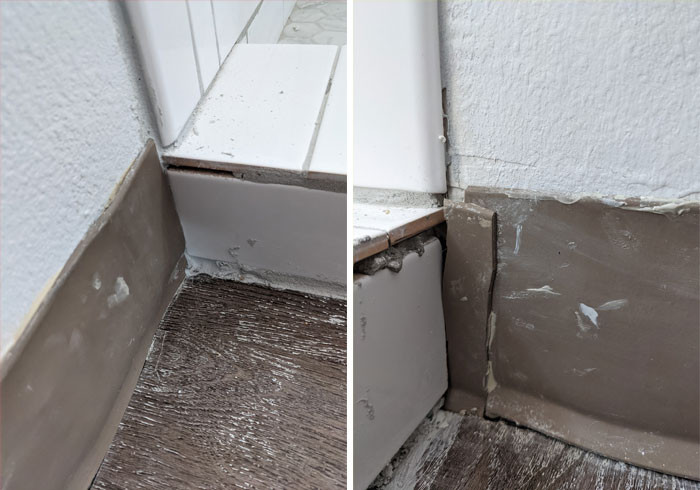 The contractor has acted like a child here, he should have waited and done the work according to the client because she is paying such a big amount for the work. The client never refused to pay them. She said she will pay after looking at the work but seems like the contractor knew she would never like the poor work.

14. The ceiling had paint all over: 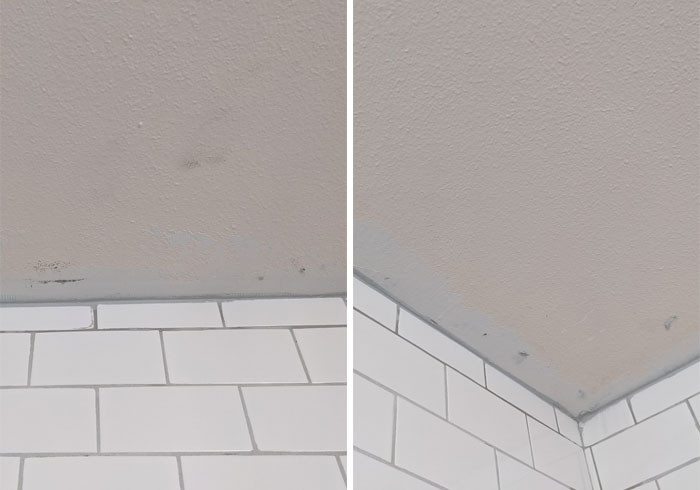 15. The window was a major issue for Amber and the contractor didn’t make it right:

16. The contractor didn’t do a clean job:

17. The flooring was not done properly: 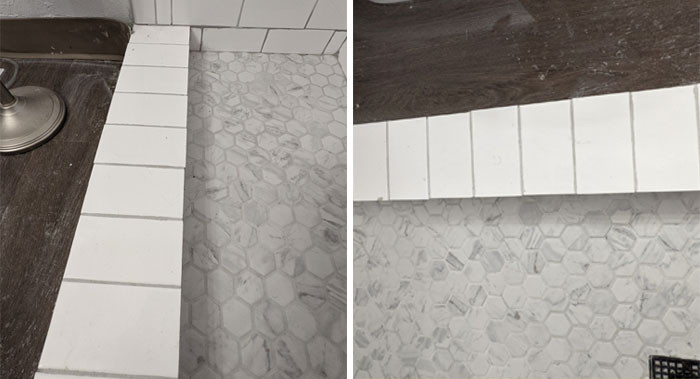 18. The contractor is not wrong.

19. The contractor is completely wrong. 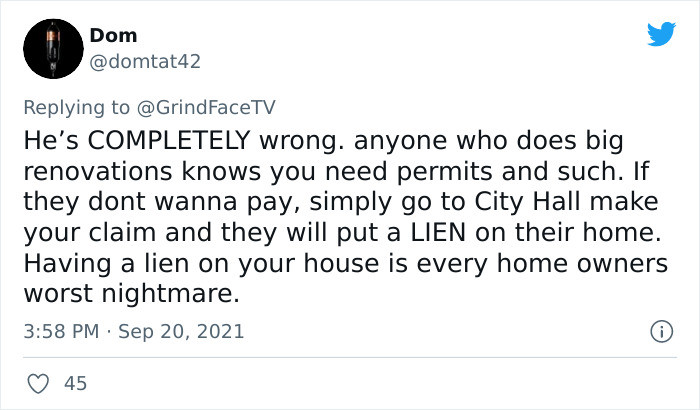 20. It is disrespectful not to pay a contractor after the work is done: 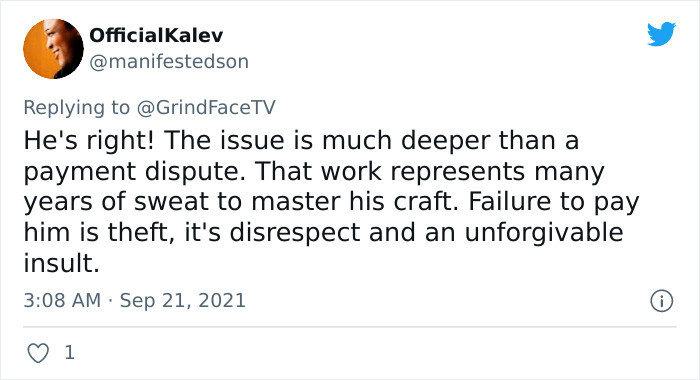 21. The contractor used emotions instead of logic:

22. This contractor should be blacklisted: 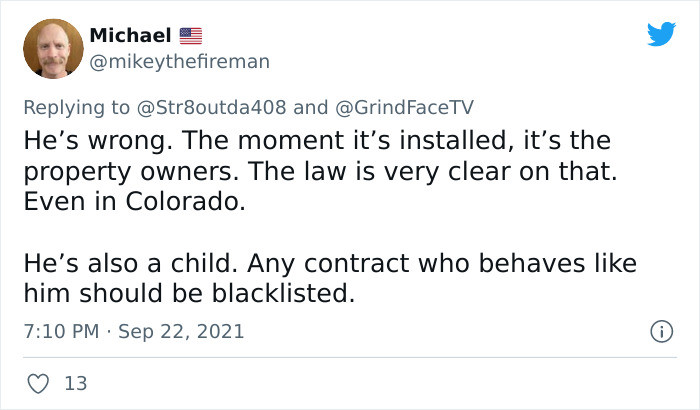 23. If the contractor has paid for everything, then it is his and he can ruin it.

24. All the material belongs to the contractor and he can destroy it:

25. If a client refuses to pay, you can take him/her to the court. 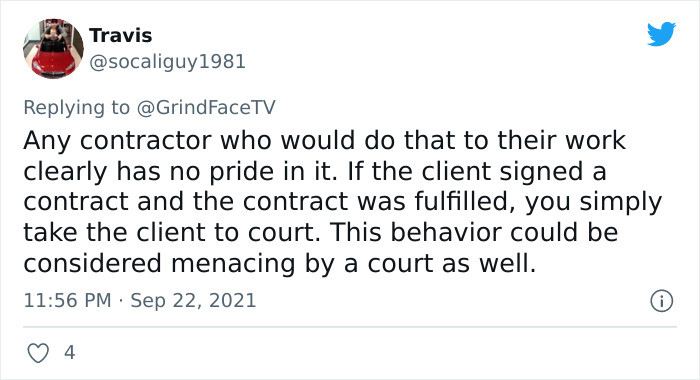 26. The contractor did not do a good job.

Now that you have read the complete story, you be the judge now and decide who was wrong here. The client or the contractor?