Anoosha Syed is an emerging children book illustrator who also loves to design characters in animation. She has acclaimed her love for Disney princesses, after all, which girl hasn’t? She says that she was in mood of developing some thing fun when she came up with the idea of illustrating Disney princesses, as in how they would be today, in the 21st century. She has absolutely done a great job as you will see in the following post.

Each Disney princess has been assigned something contemporary that fits with their personality and that is what we can call the beauty of this post. Anoosha has also wrote backstories to these illustrations and has also given homages along with them. Now its your turn to spot them. Make sure to scroll till the end to not miss your favorite character. 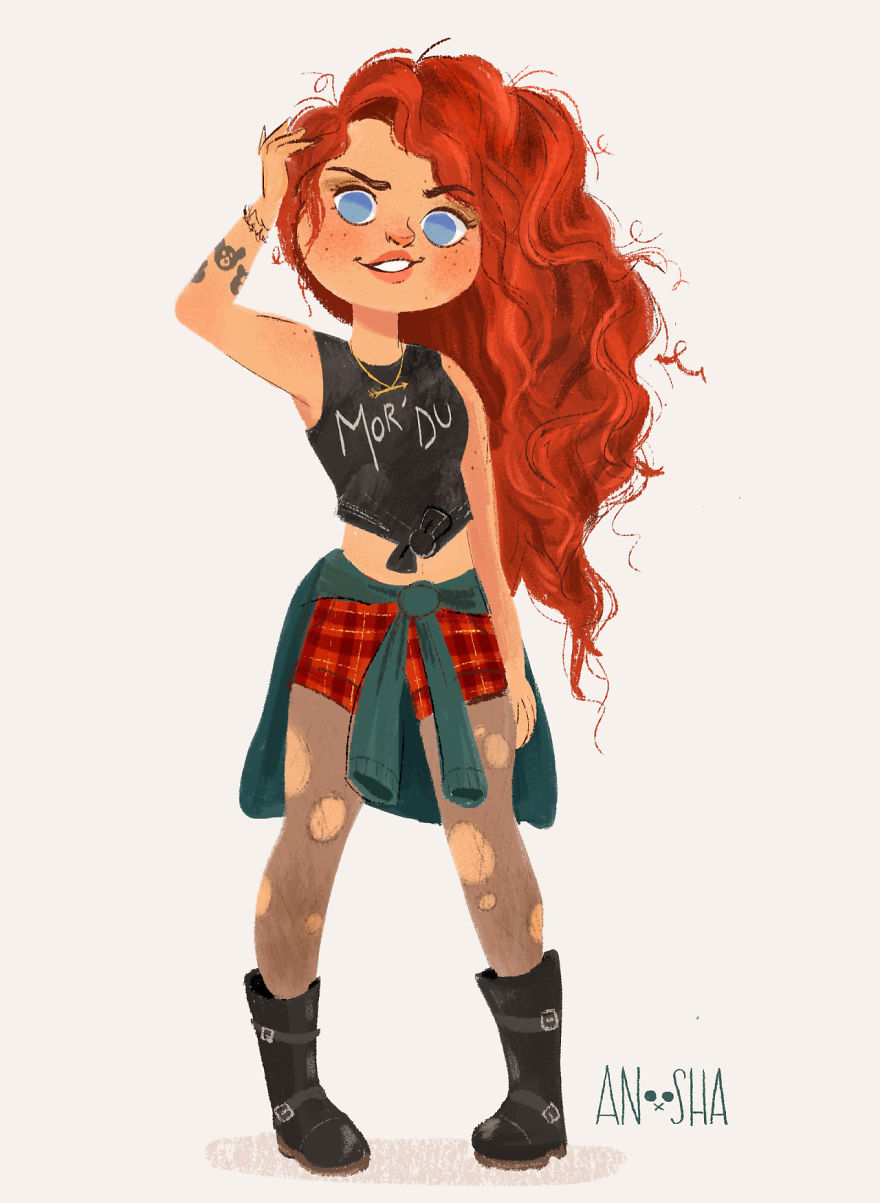 Merida is fond of horse riding, she goes every weekend with Angus (when she is not troubled by her brothers). Merida also has an archery scholarship. Merida is a rebel she discovers the world of British Punk-Rock, Mordu is her favorite band. 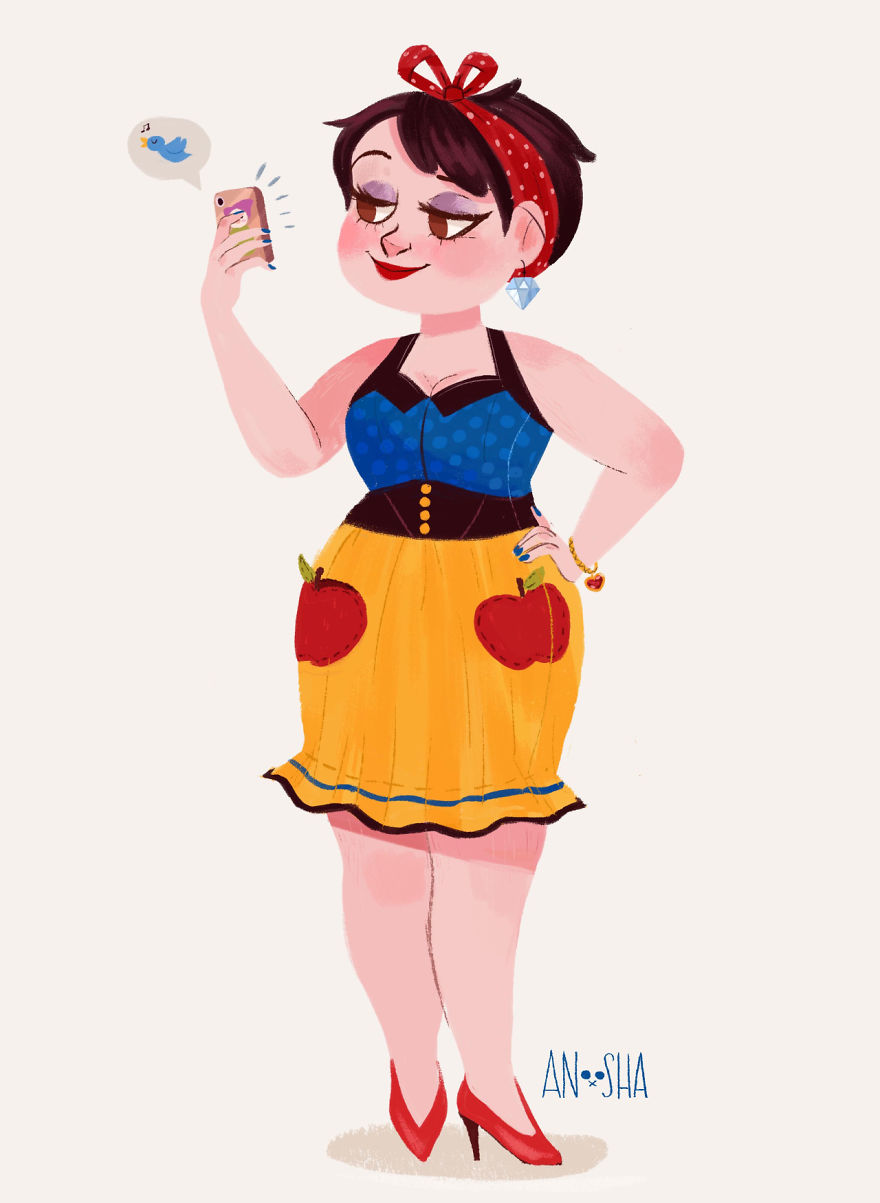 Snow white is a fashion blogger, she is a beautiful young woman with the love of nature, vintage fashion and old movies. She is always in her phone, taking selfies with her roommates or posting her #ootd. She has a lot of followers and she gained them quickly because of her humble nature. She promote self love and that beauty comes in all shapes and sizes. 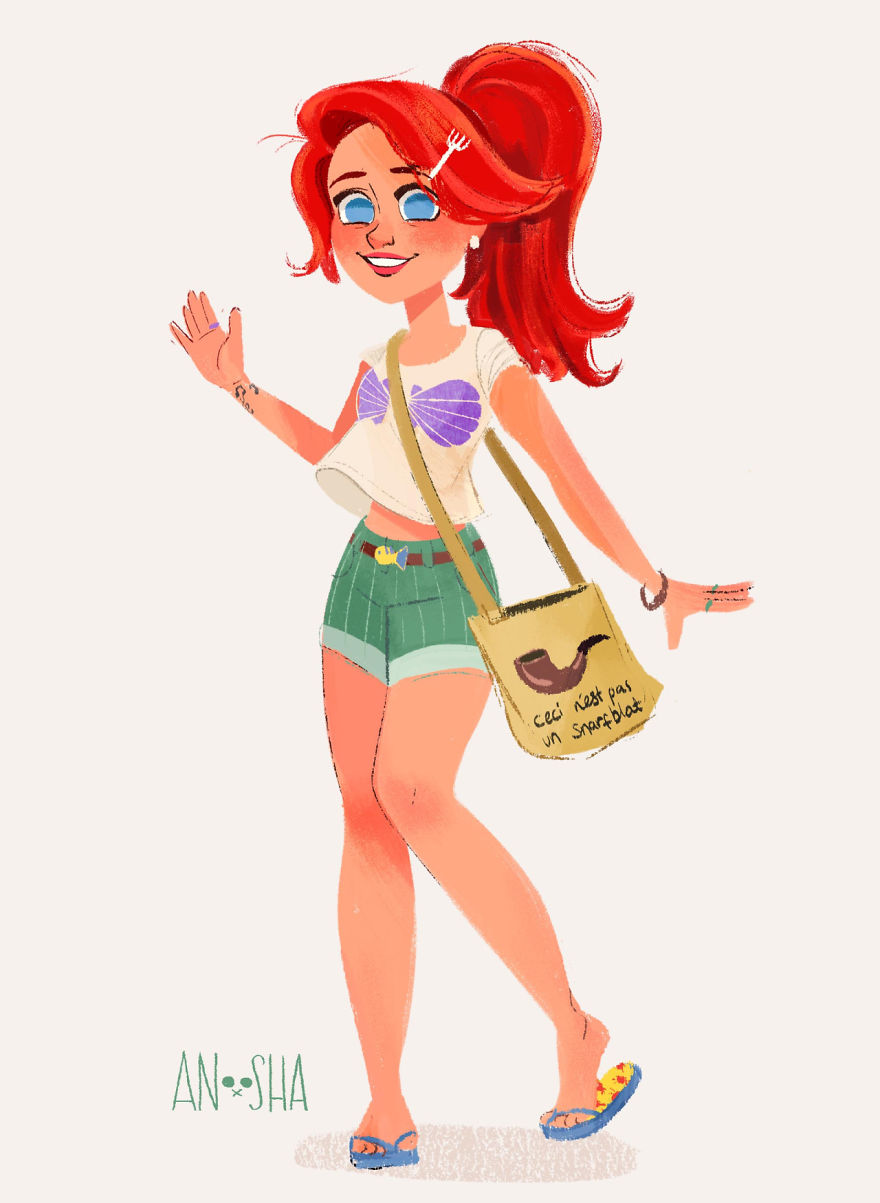 From the time Ariel was little, she knew that she was going to be marine biologist just like her father, although it wasn’t her dream but she knew it would make him happy and proud. She even joined her school’s swim team the Flounders for him. After taking her classes in Anthropology class in her freshman year, she started to get the feeling that she needs to change her major. Her sisters thinks that it’s due to Eric, Eric is a cute TA for the class, but that’s not true. Ariel also loved reading different cultures and humans. She find it extremely interesting learning about people and she decided right away that this is the world where she belonged. She thought that her father wouldn’t be happy about it but he’ll come around eventually. 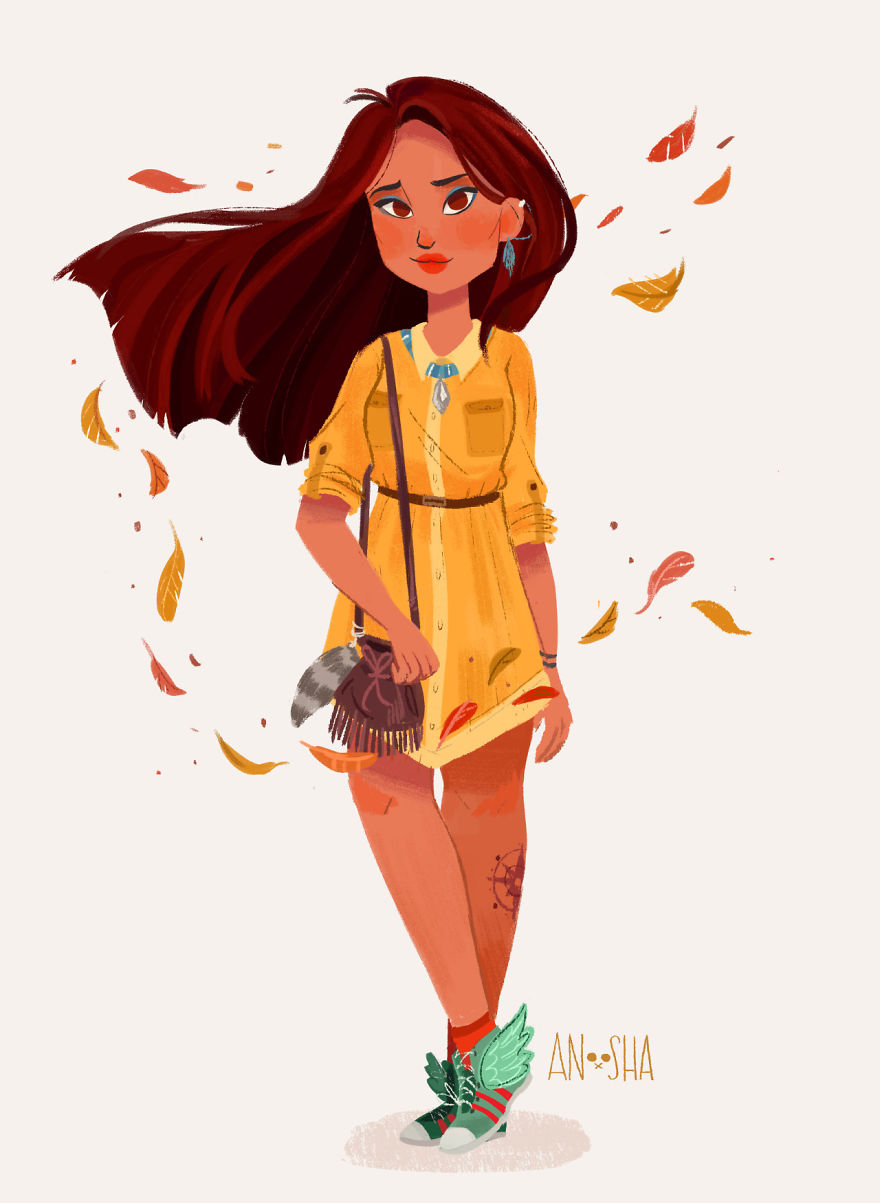 Pocahontas, with her love of languages and her heritage, she works as a translator part time while studying linguistics at college. She’s not always working Pocahontas is a bit of an adrenaline junkie and she loves to go to mountain hiking Kayak through danger of rivers or go cliff diving, which is quite thrilling. Her dream is to work as a cultural advisor in the film industry, making sure that Hollywood movies are respectful of other cultures. 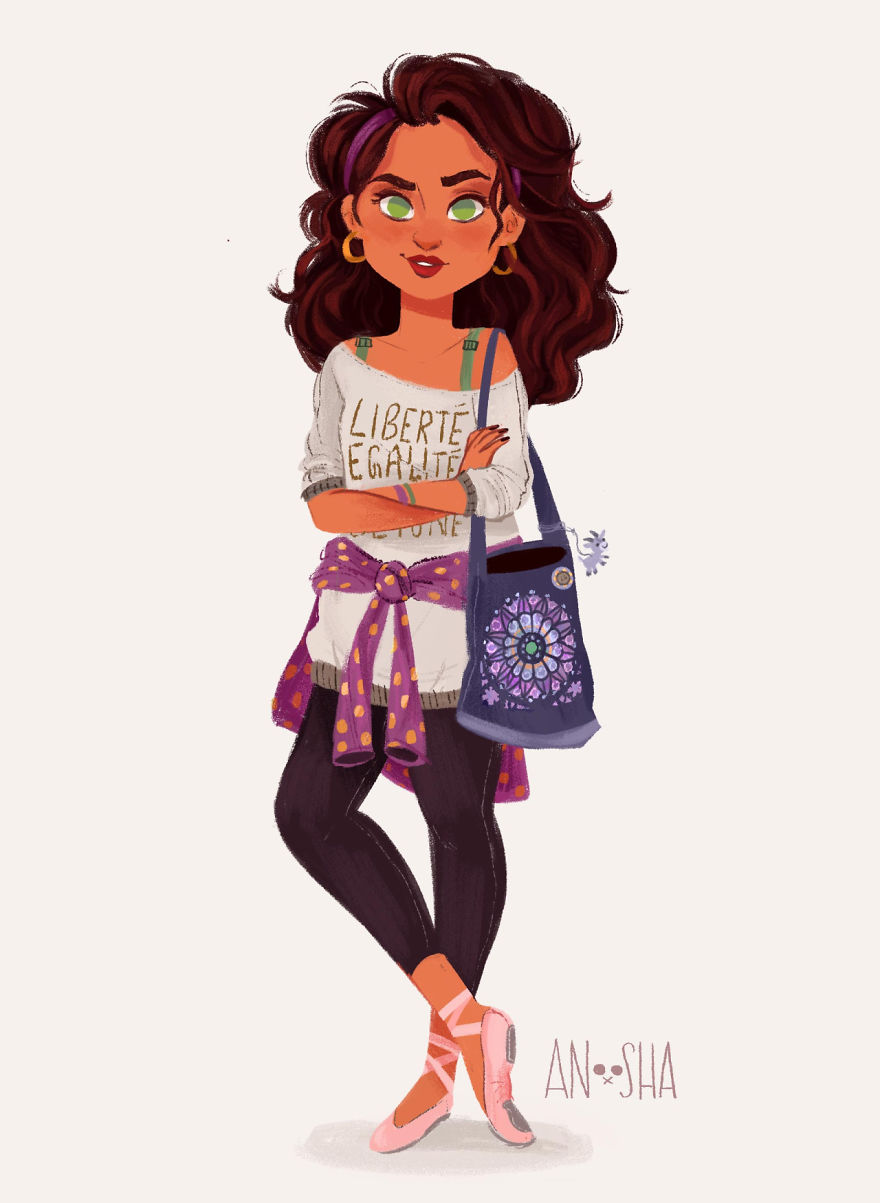 When Esmeralda was child she came to France as a refugee, but she has come a long way since then. She is the coryphée at a prestigious ballet company which is situated in Paris and Esmeralda has worked hard to get there despite the harm she has faced along the way. She has never forgotten her goals, which is why she is always up front for every pro-migrant protest and rally, Esmeralda love Paris, but her favorite place in the entire city is the Notre Dame. 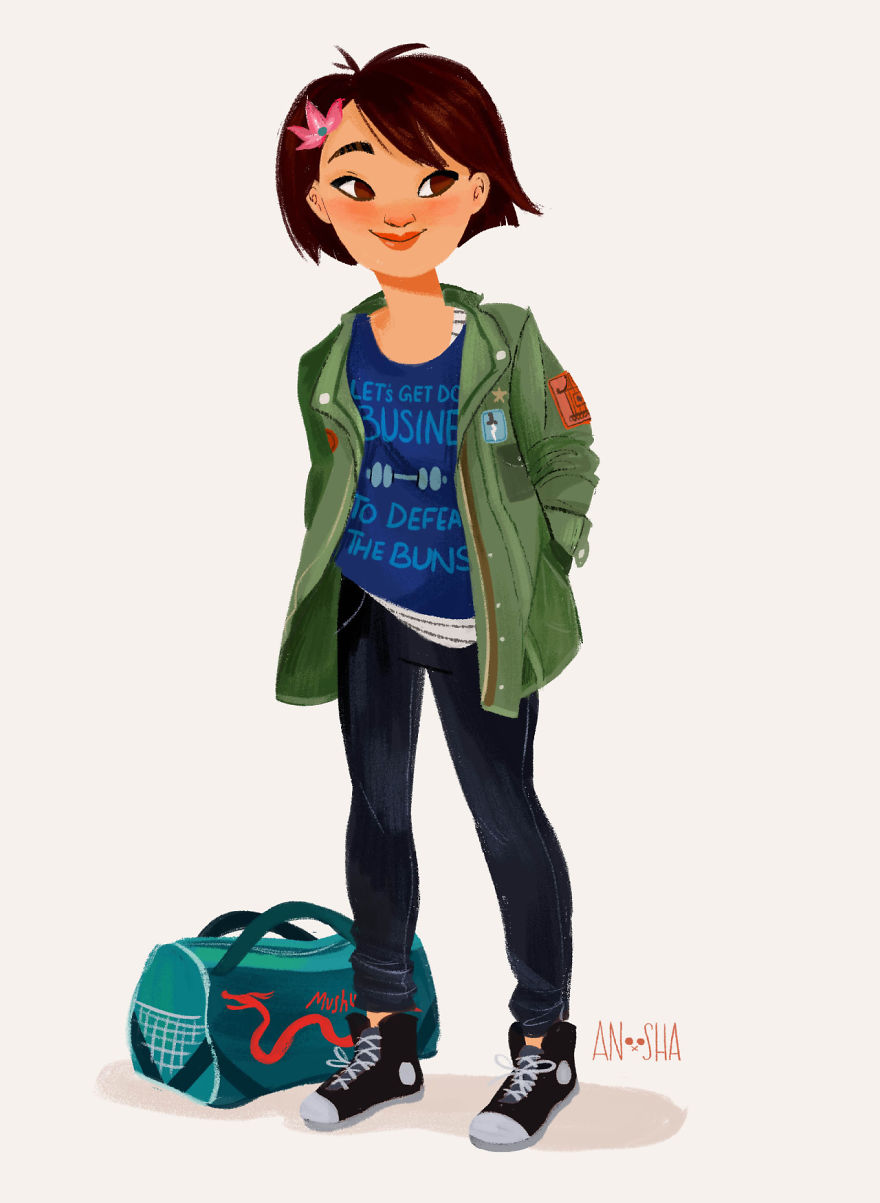 Mulan, she is hoping to follow her father’s step, her father is a role model for her. Mulan wanted to join military school that he went into when he was young. Well the problem that it’s only boys, by the help of her gym trainer named Mushu, she surprisingly disguised herself as a man and enrolled into the military school. Of course, she was going to be discovered eventually, but Mulan has been a excellent cadet and her passion led her to the school opening it’s door to female students the following year. Her father was very proud of her. Apart from being a total badass Mulan favorite movie is She’s the Man. Obviously. 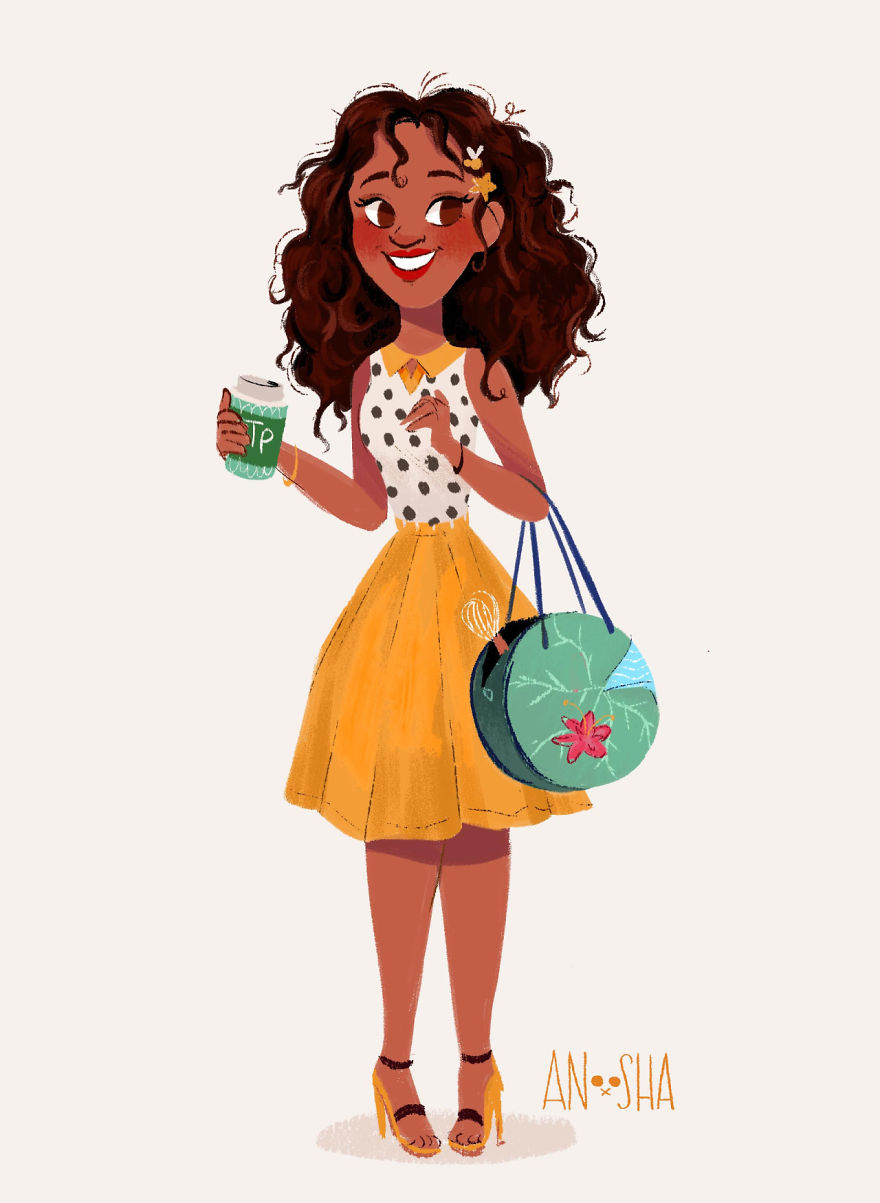 Meet Tiana, she is on the list of “25 most successful people under 25”. Tiana is one of the most youngest restaurant owner in the world, she is a powerful lady. Her cafe is wildly popular and they are scattered all over the country. Her cafe’s are famous for her family recipes, beignets, and weekly jazz shows. 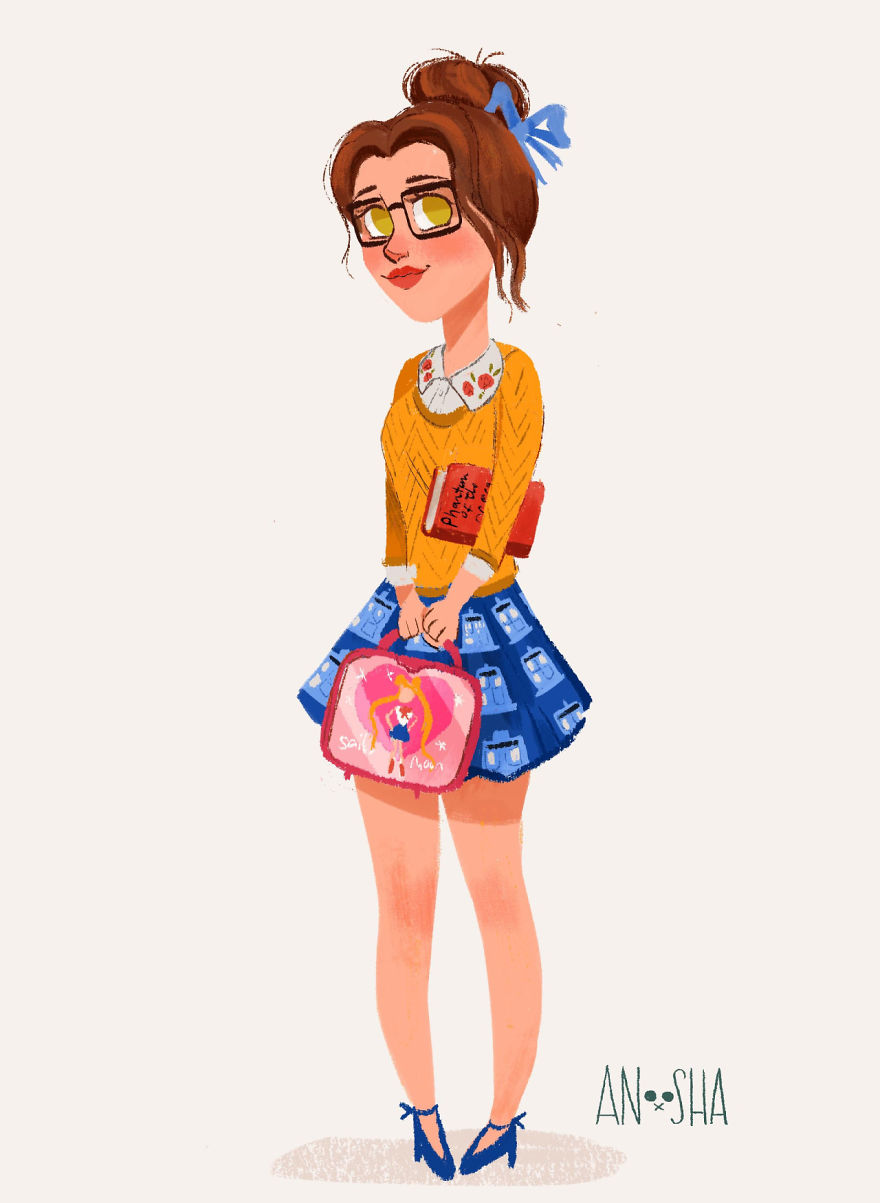 Belle is a bookworm. Bella loves well-written characters but that’s not all about Belle. She’s obsessed with movies and TV shows. She usually stays up late till 4. A.M reading fanfics, bingewatching Game Of Thrones, she’s in love with that TV series. Obviously she has a Tumblr account where she fangirls constantly. 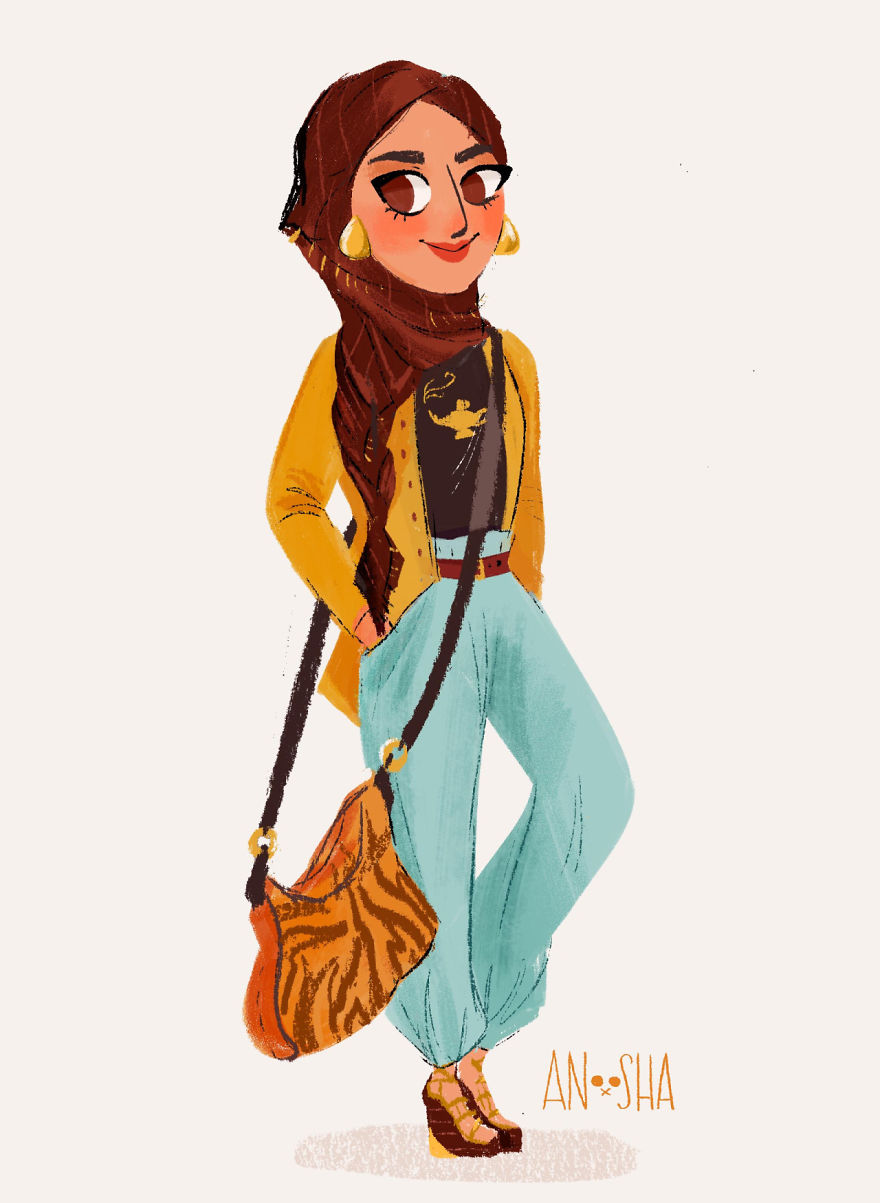 Advertisement
Meet Jasmine, she is an awesome travel blogger, she is fond of travelling. She loves to explore the world and different cultures. While she love going to new places, one of her favorite part of travelling is looking out of plane’s window while ascending  through a endless diamond sky. She is also studying to be a veterinarian and is a devoted animal right activist. Jasmine love cats and she has about 5 cats and counting. 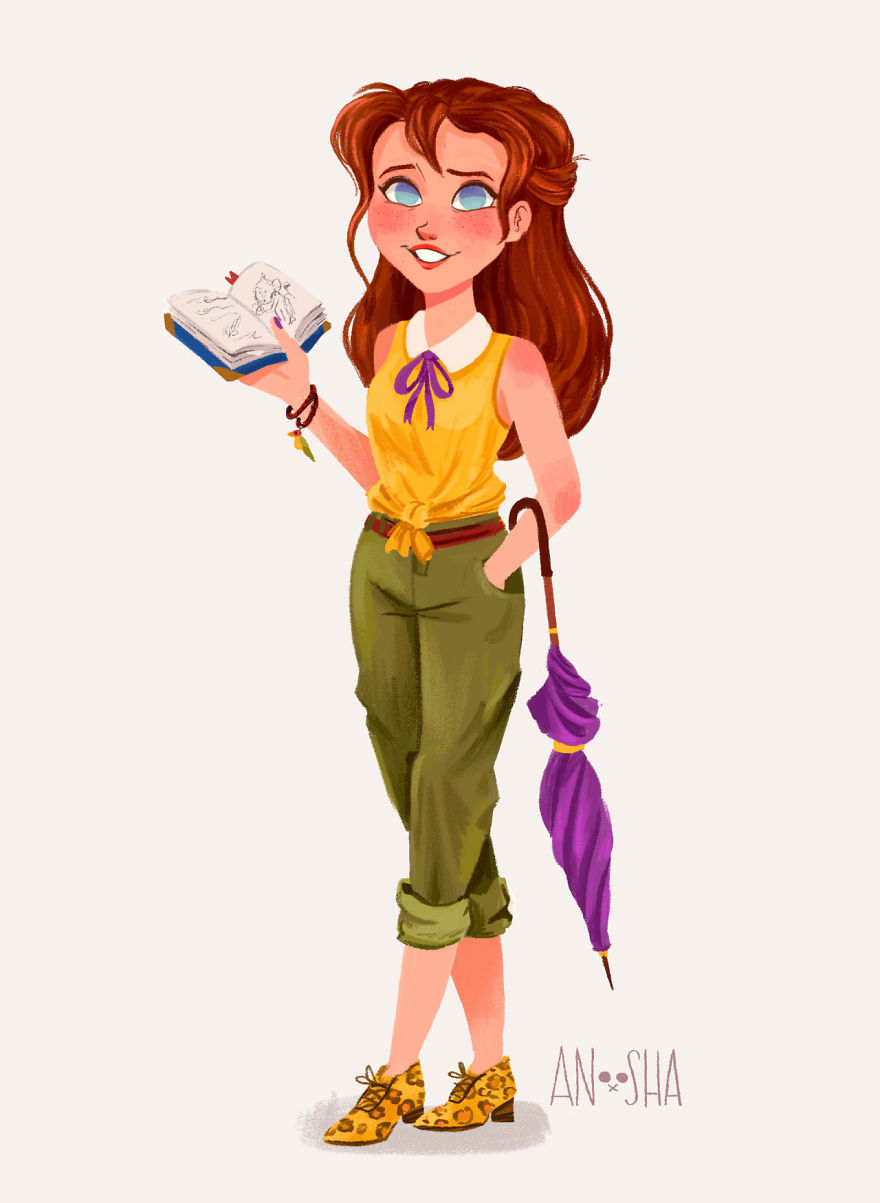 Jane Porter had just graduated from Central St. Martins with a scientific illustration degree when her father surprised her with an incredible opportunity. His father wanted jane to assist him in his research of African gorillas in the congo rainforest for the rest of the year. Jane is a free spirit. She usually spend her weekends sketching animals at the zoo, but to leave her life in London and going after to the dangerous depth of jungle was a big deal to her. She was excited and passionate to go and assist his father in his research.