How heartless do you have to be to drown an animal?

We live in a very cruel world where animals are often subjected to the worst tortures you can’t even imagine. It’s really difficult to understand why a sadistic mind would put an animal through the worst things. It is very shameful for the human race as a whole that awful humans like this would exist but unfortunately, it’s true. Some people are way beyond twisted to such a degree that they would do such things to animals. But just like that, there are some really amazing people who go out of their way to look out for animals (stray or domestic). Remember these animals can’t talk, they depend on you or their natural instincts to get through their lives and one can only help them. Once you help an animal, it stays loyal to you and they consider you as their friends or even as their parents, and this bond is nothing but pure and perfect.

Bella, A 10-year-old German Shephard was subjected to a really cruel fate by her previous owners, they tied her feet to a giant rock and threw her along with the rock into the River Trent in Farndon. The water was freezing cold and God knows how much that poor soul struggled for hours and hours. 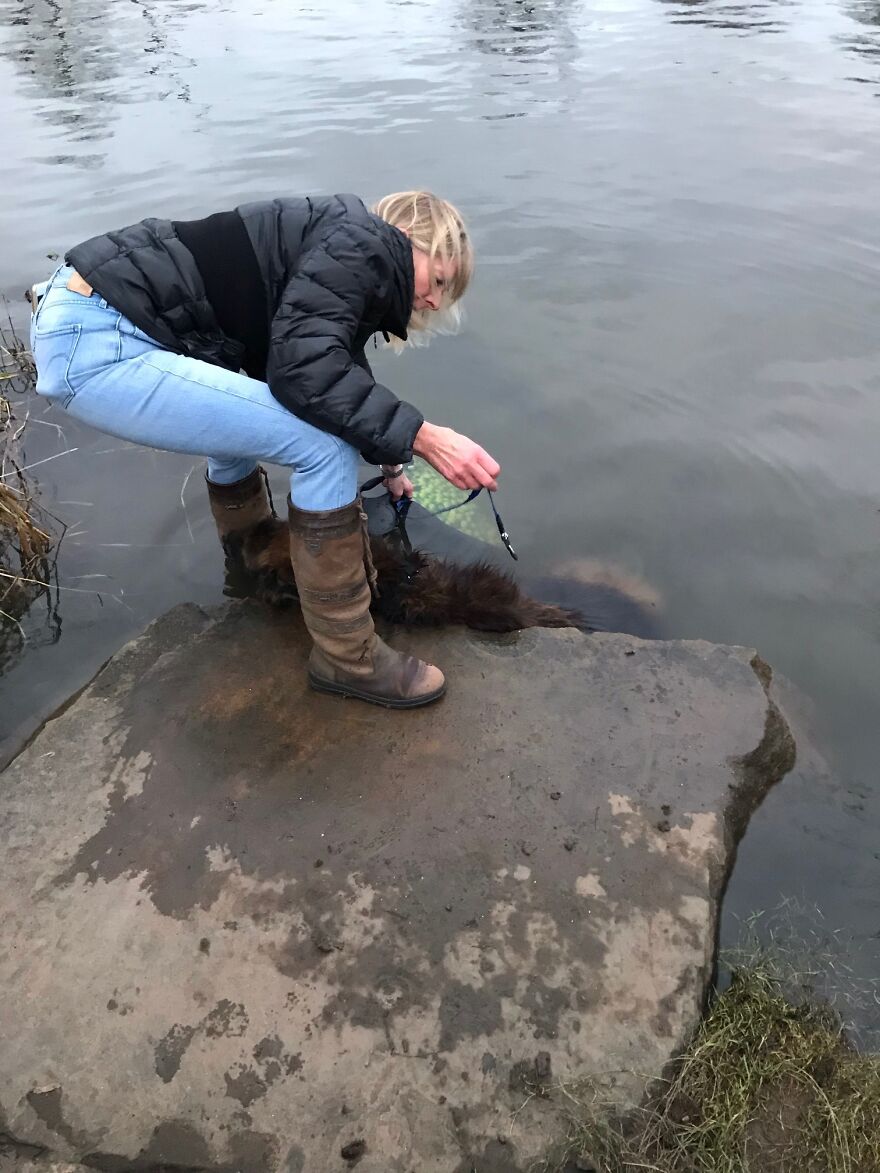 But hopefully, two dog-walkers were passing by the same spot and they witnessed a poor doggo struggling in the water. Now imagine how bad things were for this doggo. First, it had to struggle to stay on top of the water to get air while being tied to a rock and then the freezing cold water took its toll on her, but luckily, Jane Harper and Joanne Bellamy saved this poor soul from downing.

You can simply look at her face and tell how traumatised she is. Poor girl. 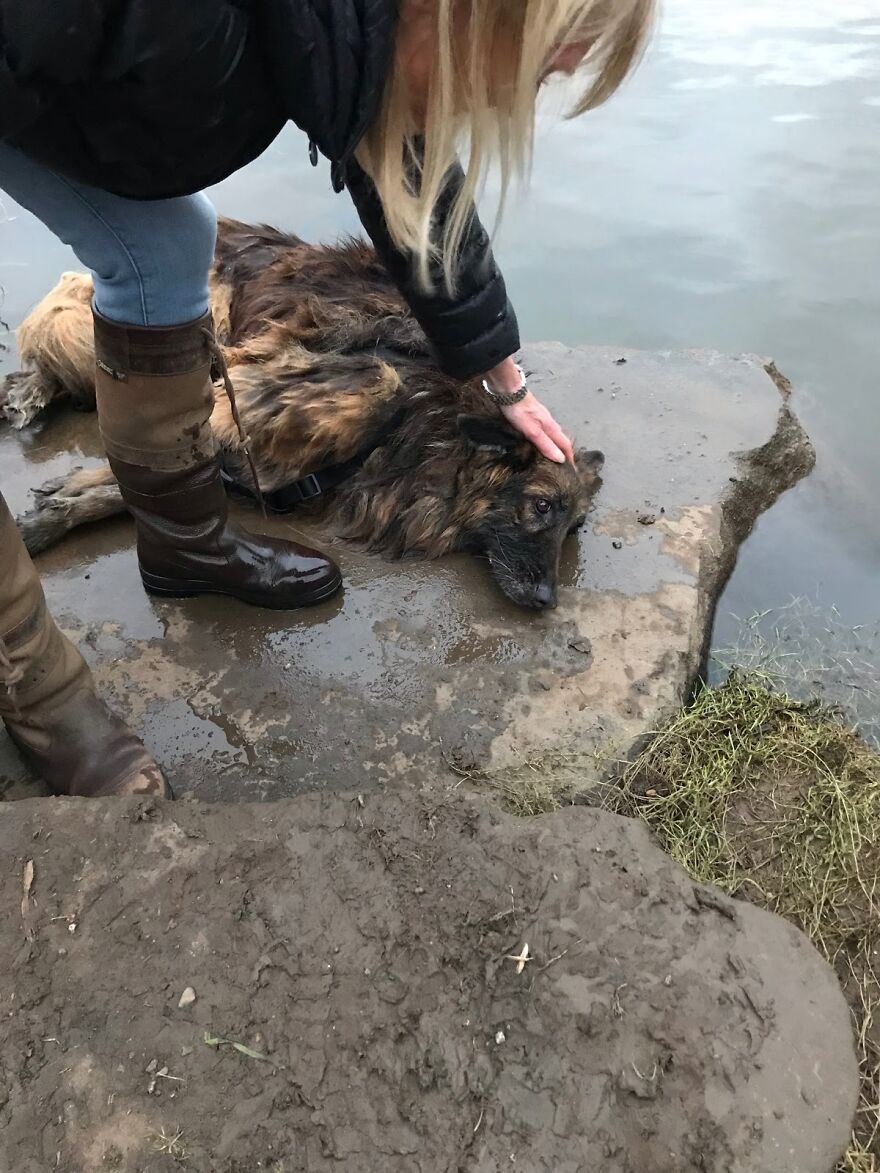 Bella was in shock and after her rescue, she was left in a vegetative state. 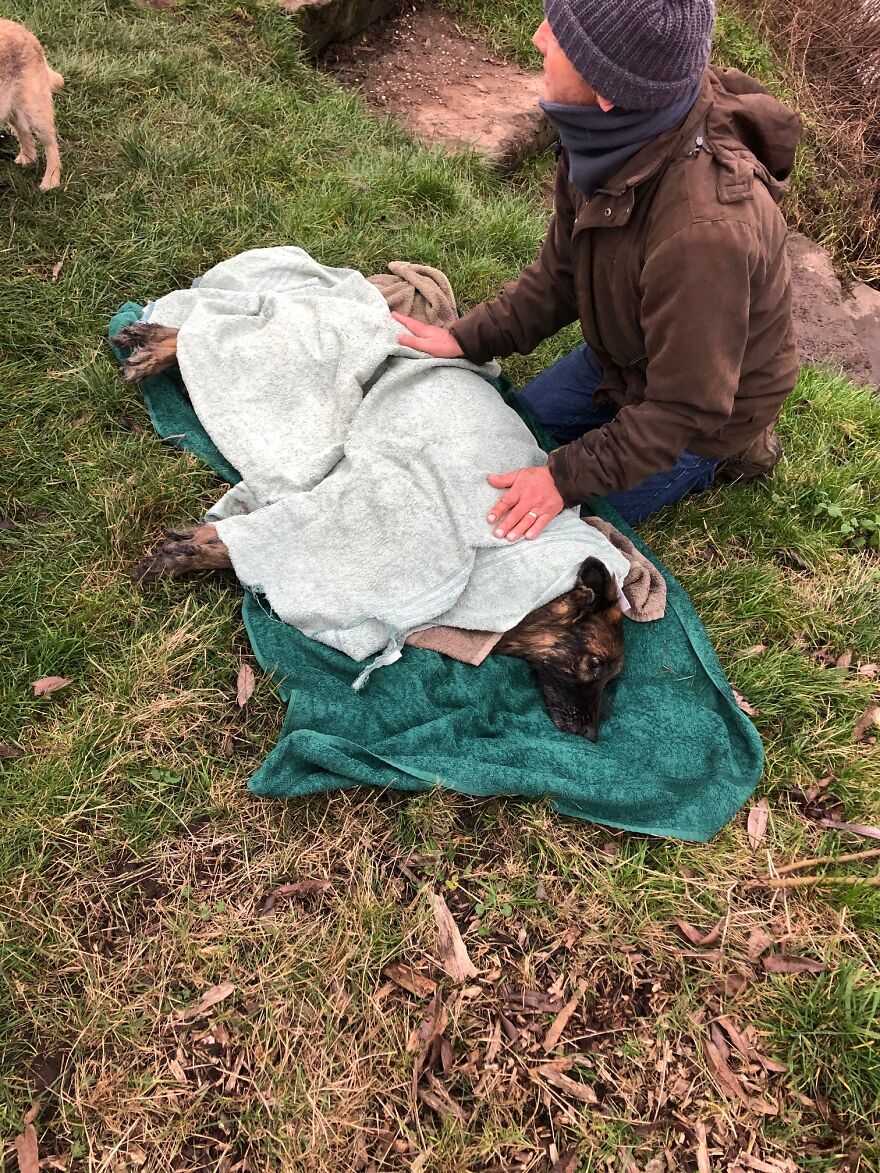 This rock was tied to her feet so she could drown with no return. We hope there’s a special place in hell for the person responsible for this. 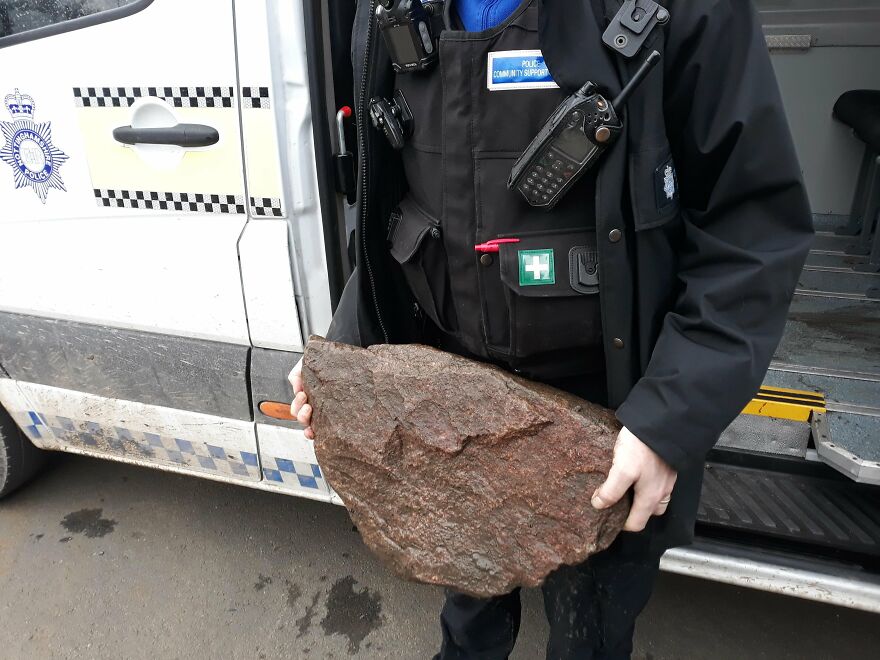 Bella, however, was taken into emergency care. She was treated and looked after at a local vet. 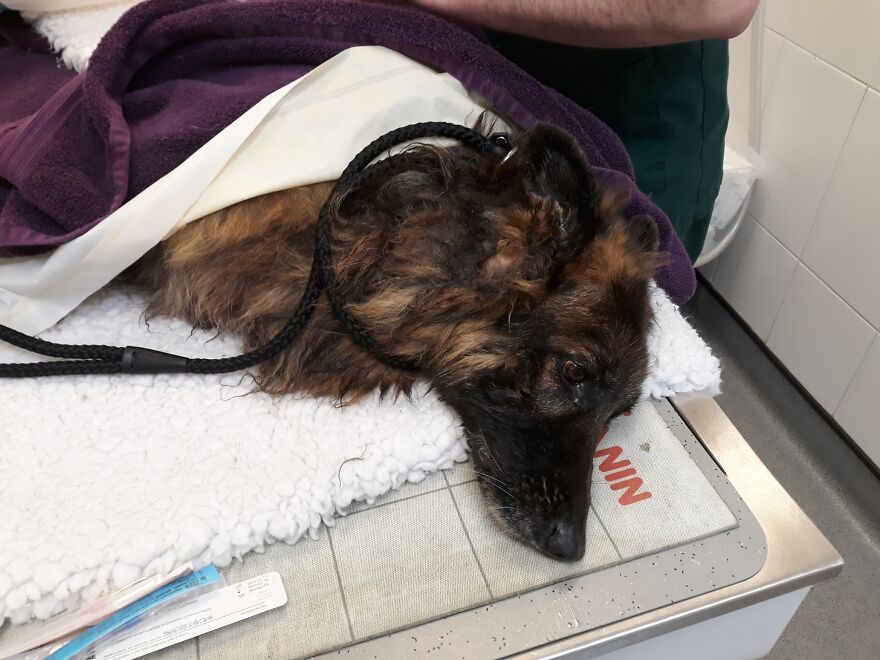 After her recovery, she was transferred to the RSPCA where she was treated like family by all of the staff members there. 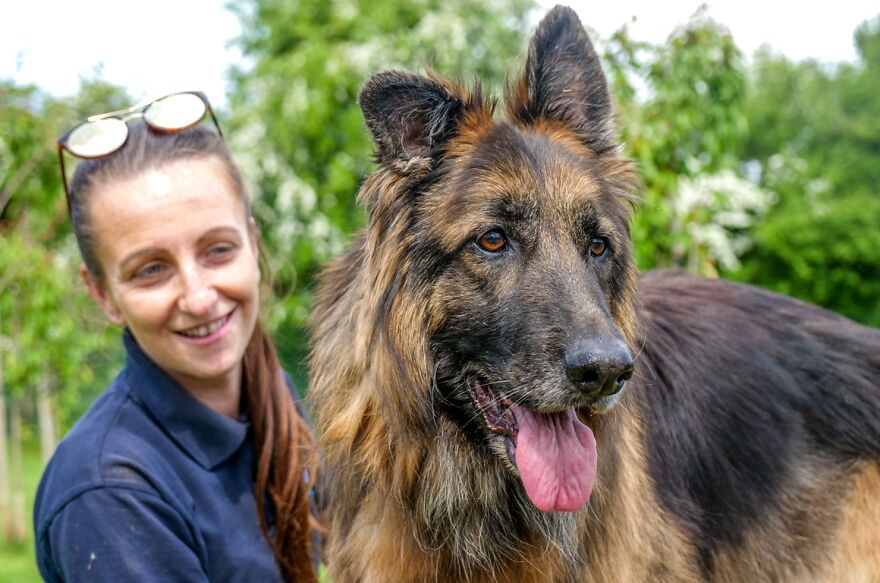 Bella enjoyed much of her time at the RSPCA where she lived up to the joys of being alive and saved by these wonderful human beings. 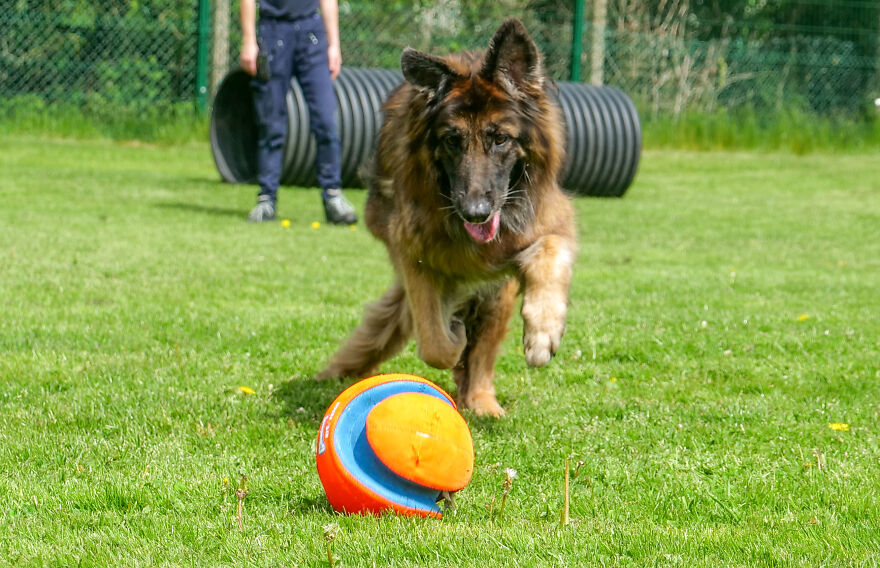 Maggie Mellish and Charlie Douglas, two retired citizens of South Derbyshire stumbled upon a post that said Bella was up for adoption and this couple adopted Bella, who at this time was 11 years old. Her new parents looked like really good people who would actually look after her as their own child. 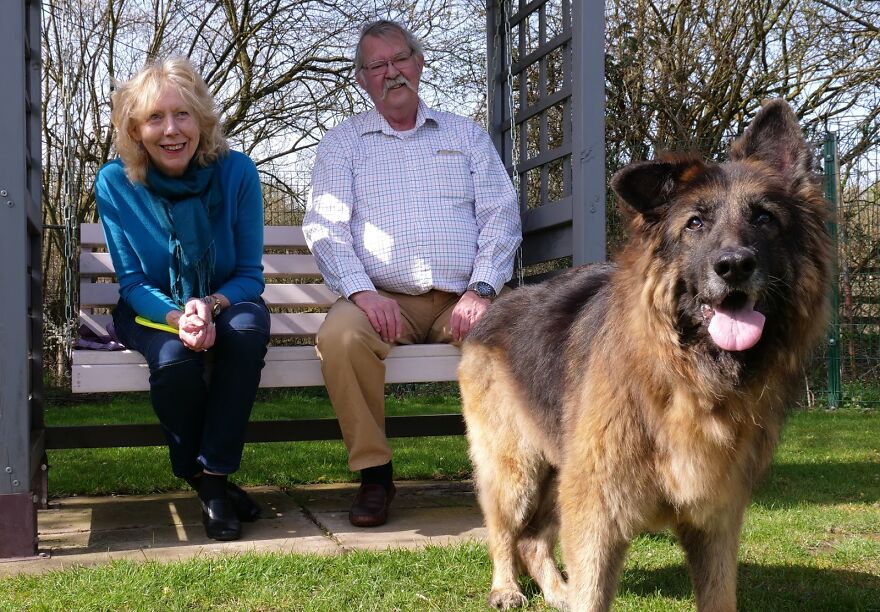 “We as a family have had three shepherd-type dogs over the last 30 years and really love them. We lost our rescue dog Tia/Luna two years ago and my daughter’s dog Flame this year. We did really miss them. Then we saw Bella’s story in the press a few weeks ago and the fact she needed a home, so my daughter, Clare Lusher, encouraged us to apply for her.

We know she will need regular vet appointments and are willing to finance those. We know she is in her older years, but we just want to offer her a loving home she so deserves after all she has been through. We are both retired so she will have our company constantly, which is what she really needs, and it will be great for us too,” said Maggie. 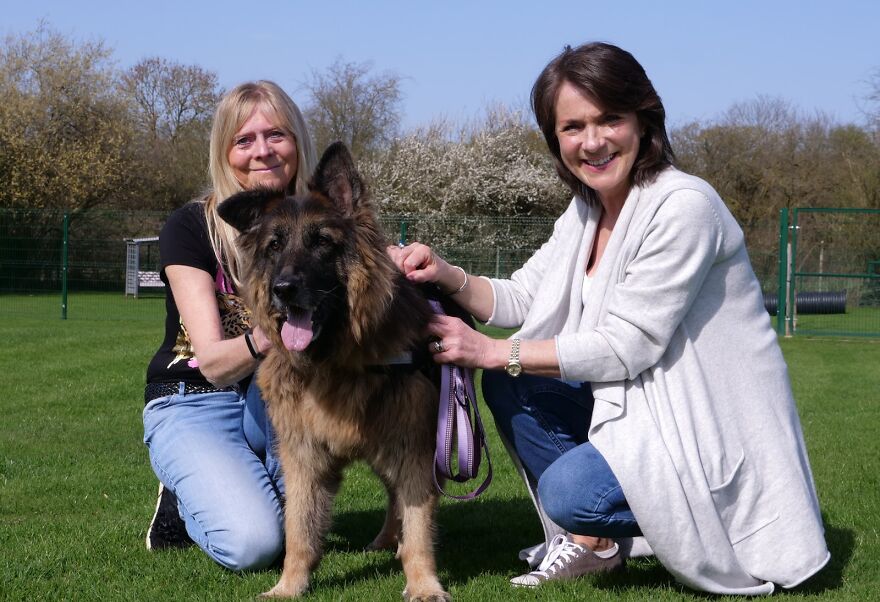 So the story had a happy ending. No animal deserves to be put through this misery. If you have a pet and you cannot take care of it, give it to a shelter. Don’t ever subject an animal to cruelty. Do not adopt an animal if you can’t take care of it or will abandon it once you’re tired of it. Be a decent human at least. Nothing boils our blood than seeing animals suffer at the hands of humans. But we are also very hopeful because some kind souls do exist who go out of their way to save and look after stray animals. Let us know your thoughts on this in the comment section below.