Flying on an airplane is on a whole another level as compared to driving or any other way of traveling. It is especially challenging for those who have children and have to manage them during the whole fight. It actually serves as a test of how they discipline their kids. While it is hard for the parents, it is equally hard for the ones sitting next to these kids. It is common decorum of sitting in a plane to stay quiet and create a comfortable environment. No one wants to spend 8 hours on a plane with someone shouting, whining, or crying. While adults can tolerate the pressure of the air and ear-popping changes when the plane is at a considerable height, kids and toddlers cannot tolerate such pressure. They will most likely start crying.

As much as we think parents are being disrespectful for having such whiny kids, if we think rationally, it is not something we can blame the parents for. After all, whining is all that kids do. Parents can only do too much. They are probably the ones who want their kids to stop making noise the most. While we agree that parents are not always at fault, the least they could do is be aware that their kid’s behavior is becoming a cause of discomfort for other people. While most parents are apologetic, there are some parents who simply do not bother how disturbed other passengers are. Such ignorant parents exist and today we have a relevant story to tell.

A user on Reddit which goes by the name of u/WitchesCoven99, shared an anecdote to r/EntitledParents of the time she had to sit through a flight next to a very unpleasant mother and her kid. The mother made no attempt to calm her 7-year-old son when he got bored. Instead of trying to entertain her son and getting him occupied with something, the mother expected the person next to her to entertain her son. The Reddit user was expected to give up on her source of entertainment to entertain the child of another passenger. The Reddit user reports that when the mother saw her watching a movie, she showed a lot of entitlement and demanded the user to give her mobile to the kid so he can stop being bored.

While you may think that the Redditor must have said refused and that is the end of the story, there is much more to this story. What is to come is much worse. The mother felt so entitled that she did not accept the girl’s refusal!

Here is how the story goes! 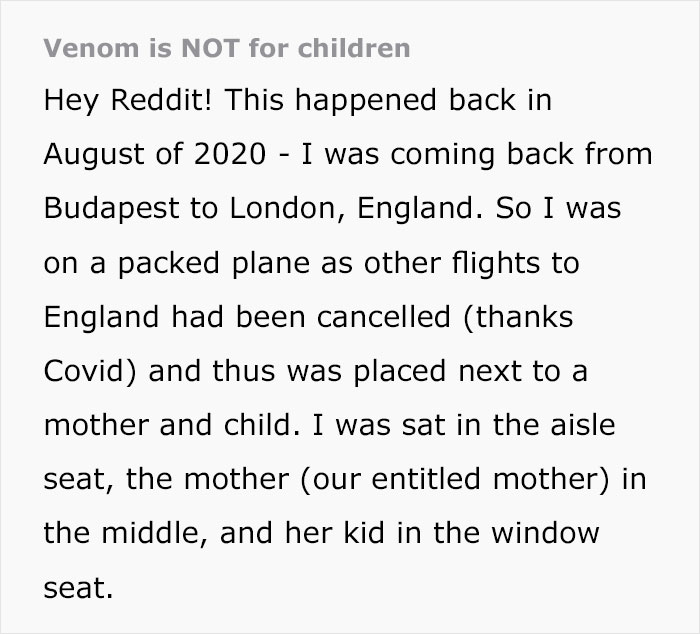 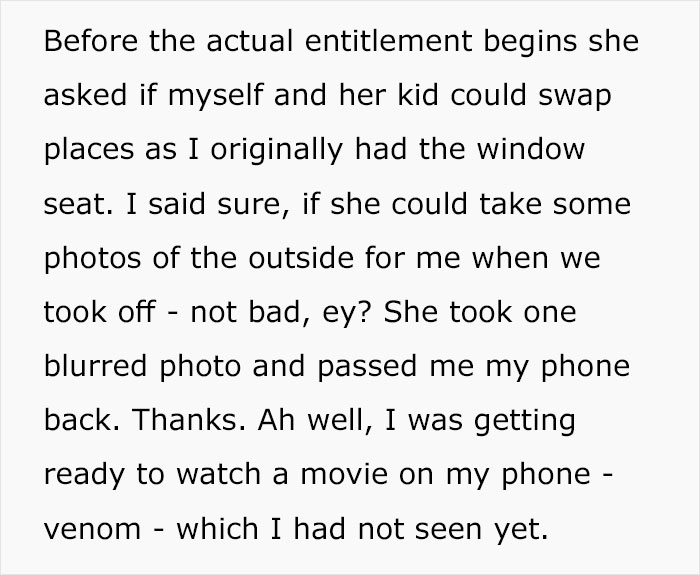 So the entitlement has already begun! I am seeing the start of a behavior pattern here. She did not even take good pictures of the sky! That is the least she could do. There is no way I am ever letting go of the window seat.

The child enters the field! 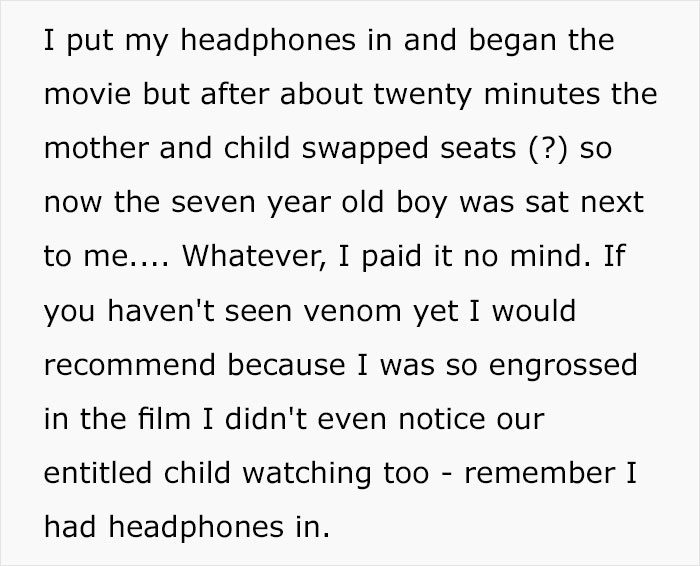 Well, I guess we can expect a 7-year to know a bit about personal space. But even if he didn’t, the mother could surely notice what her kid was doing and discourage him. We got ourselves a good movie recommendation during the story, guys! 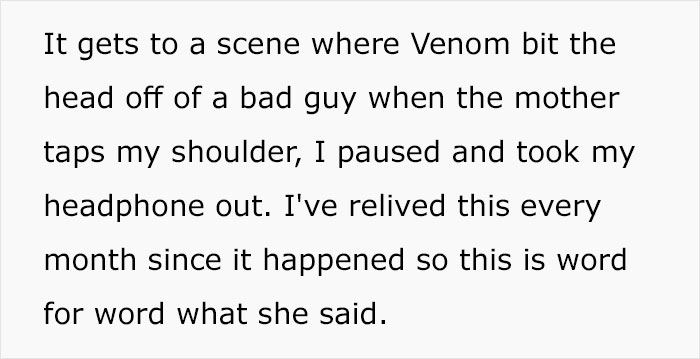 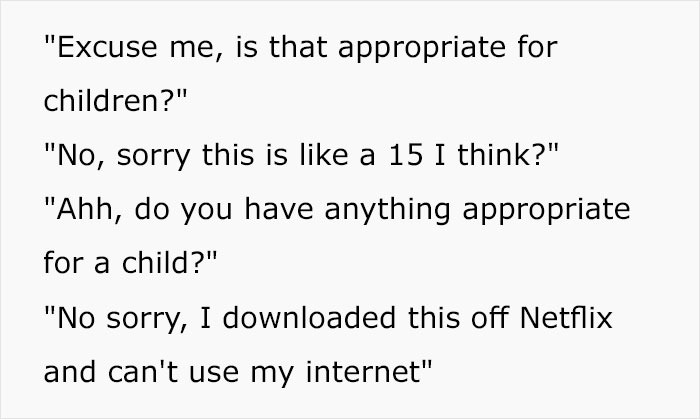 Damn, so there is more! This mother cannot seem to take a no. 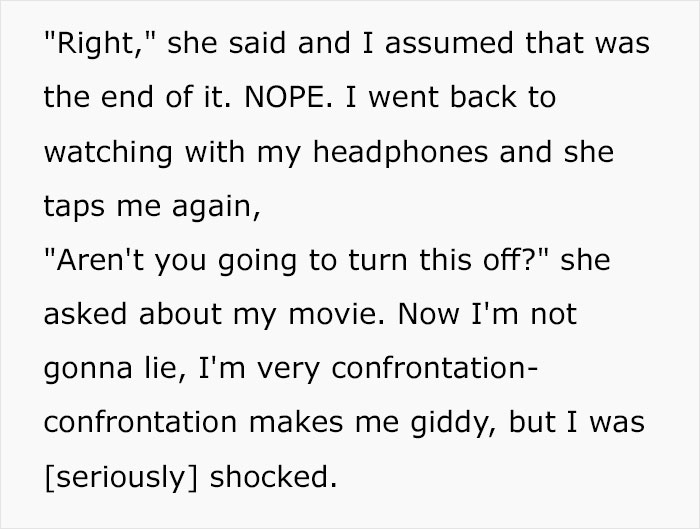 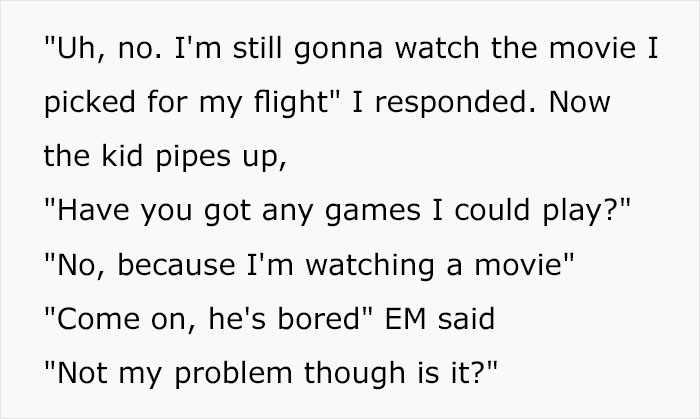 As if the entitled mother was not enough, the kid had to pitch in as well! It is hard to digest how entitled the mother is. Out of all places, people should not be disturbed during a flight. Flights are already so stressful and exhausting, people should try to make it a more comfortable experience for those sitting next to them and make sure they do not cause any annoyance.

She snapped! But now the mother is ready to attack directly. 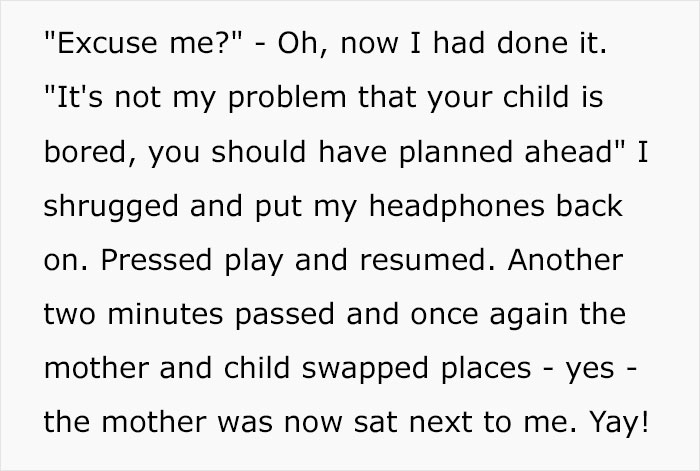 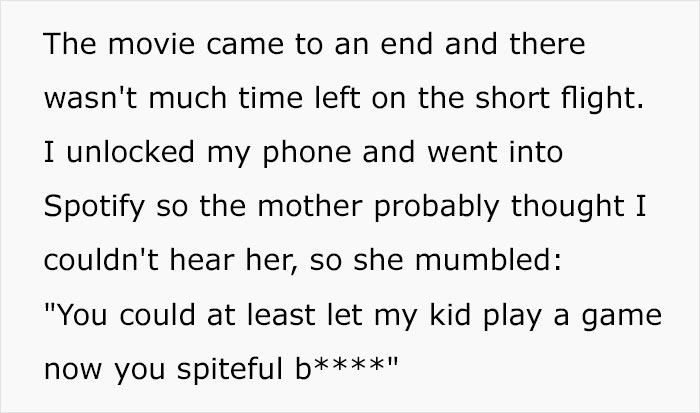 Oh my God! It’s one thing to be entitled but it is another to verbally abuse someone. The mother has crossed her limits.

And she strikes again!

Honestly, if we were in her place, I would have reacted with the same amount of anger. One could have felt sympathetic or understanding towards the mother if she did not act so entitled or blatantly aggressive.

What a great way to take revenge!

Honest Mum’s Vicki Broadbent had some amazing insights for mothers on how to keep their kids grounded on flights! 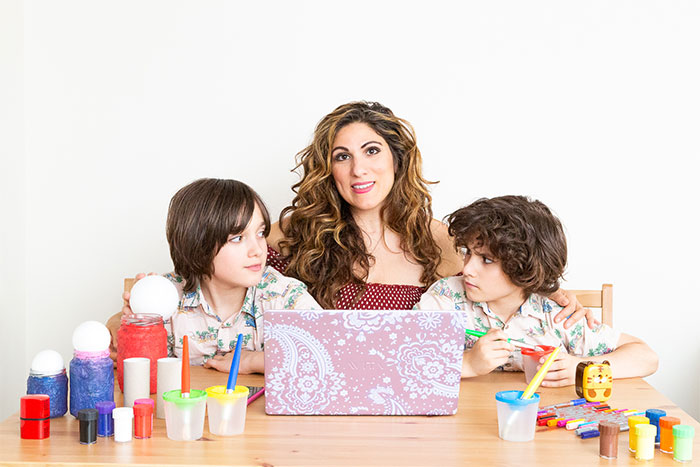 Vicki Broadbent is a very accomplished award-winning lifestyle blogger. She is a parenting expert and is the author of the bestsellers Mumboss (UK) and The Working Mom (the US and Canada). During an interview, she discussed how traveling with kids by air should not be as big of a hassle as people make it to be. She demonstrates, “In my hand luggage, for example, I take snacks, drinks, a blanket, card games, small toys, and some items of tech where I’ve already downloaded films, games, and meditations that can help them relax and sleep”. She added, “Of course, last-minute flights occur and we don’t know the context of this mother’s situation and how rushed she was when it came to traveling and being organized, but assuming you’ll have access to other traveler’s sources of entertainment isn’t wise and I can see why this man was annoyed by it.”

She also showed empathy towards the mother and suggested fellow passengers be more mindful of how things do not always go planned for mothers. Being a mother of three kids, two boys, and one girl understood the mother’s difficulty and position and claimed how it was not realistic to expect children to be as disciplined as adults. Even if a mother comes prepared with entertainment, it is still not easy to calm children when they get irritated.  “I find it unreasonable that other adults expect children to suddenly become silent on flights. I try where possible to book night flights so my children can sleep but this isn’t always an option,” Vicki Broadbent said. “Of course, do fly prepared, taking items that can help soothe your child (their favorite toy or game/ app, milk, a pacifier, etc) but equally the onus should be on fellow travelers to act reasonably and remember that they too were once a baby/child themselves! No one is more stressed than a parent on a plane with a crying baby or child.”

Having a little kid should not keep someone from traveling. Results of a survey of around 1,500 U.S based teachers showed that 74 percent of educates thought of travel to be very beneficial for a student’s personal development. They believed travel contributes to a student’s growth and hence implied that children should not be kept from traveling.

Moreover, a large percentage of 56% of teachers find traveling to be helpful in improving a child’s academic life and benefiting career as well. In case that was not enough, another 42% believed that kids who travel more are deemed to be more promising applicants by the college admissions recruiters. Teachers also that kids who have had more exposure to other countries, cultures and been with people with differences, are more tolerant and accepting of everyone around them. They are more respectful by nature and do not let differences cause any hindrances in their relationships with other people. Other than this, teachers also believe it helps the kid build a stronger personality. Kids who travel more are more self-sufficient by nature. Their morale is higher than other kids and they are more sensitive to other people’s feelings. They also adapt well to changes and new surroundings.

In case some parents are confused about how to discipline their kids on the flight, here are some ways that you can do it!

Every story comes with feedback. So here are some of the responses from the public online!

We felt the shame too ZDragonite, we felt it too!

No one can disagree with this!

Kids need to be told there and then that they are being disrespectful.

You are lucky if you haven’t had this encounter!

It is awful to even imagine being on the same flight as this rude woman.

Plus, it was really needed at this moment.

Plus, why would you give your only source of entertainment of a flight to someone else?

Some people came up with alternative comebacks and also pitched in some humor we were yearning for during this heated story!

Someone got reminded of their own story. 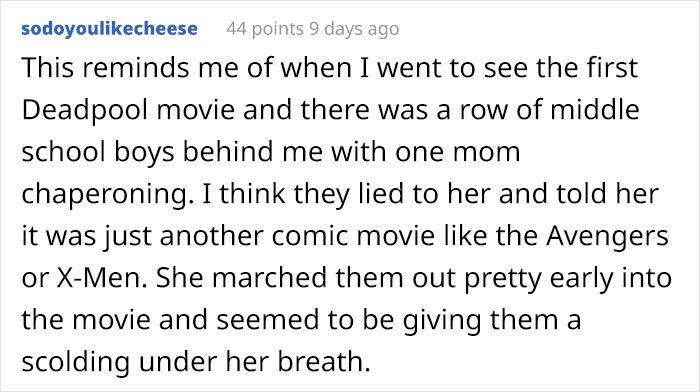 Trust me Merodisenpal, we are all praying the same thing from now on!

Well, folks, that is the end of the story. One can completely empathize with the Reddit user who repeatedly got interrupted while watching the movie they specifically picked for the flight. No one knows how long the flight was, but we can sure tell it was not a pleasant one. We sincerely hope it was not a long flight. On the other hand, Vicki Broadbent strikes a balance by showing empathy toward both sides. One cannot disagree that sometimes kids are not completely in your control. Whatever you do, they still end up making some sort of issue. We all need to be collectively more patient with kids. However, the mother still could have shown less entitlement. If the mother was apologetic and excused for his kids behavior while also discouraging him, things would not have gotten this worse.

What do you all think? It would be great to get more opinions on this. Let us know in the comments!