Many teenagers’ first job is babysitting.

Even though nobody saying it is easy, that is what most teens do when they need to make some money while also studying. it is especially the right choice for those who already know how to take care of kids because they are used to doing so with their siblings. While it is not recommended that parents put all the responsibility of childcare on the eldest child. Doing some chores around the house can actually be beneficial for a person in the long run.

When we do become adults and have to move out, we have to do all these things anyway so we should think of it as a headstart. However, forcing your child to do everything can actually make matters worse as shown in this particular story. Although what we are focusing on today is definitely the opposite. This person probably heard the word ‘parentification’ over the internet and thought that was what was happening when his Father asked him to babysit his sister while also offering him $100.

This parent took to Reddit to ask whether he was in the wrong for doing this.

He goes on to explain why he asked in the first place. 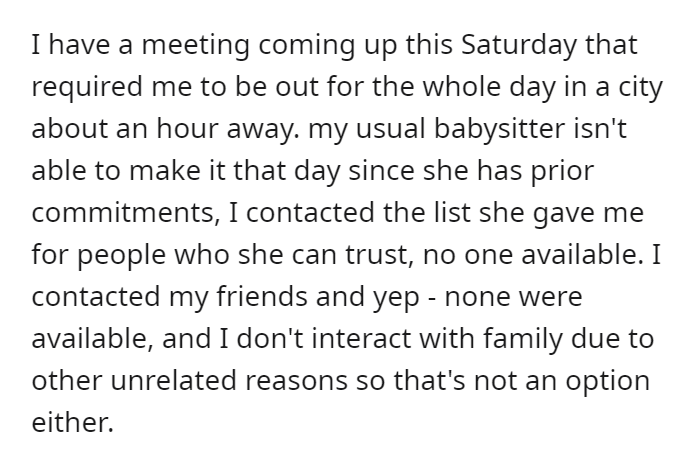 As he had an important meeting and no one else was available. 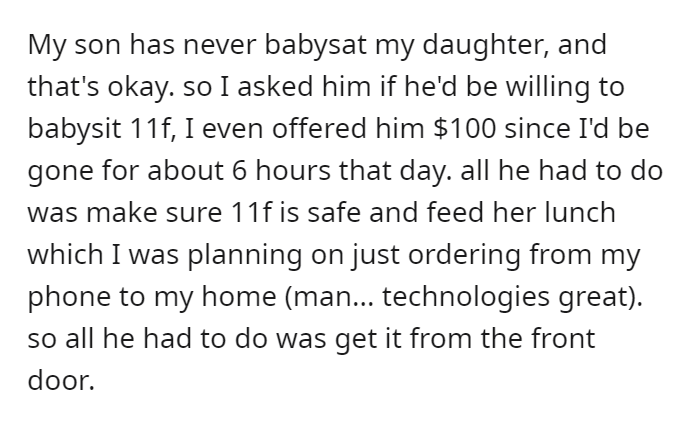 However, the meeting got canceled so everything was the same as before.

Until the son came knocking on his door to ask for money. 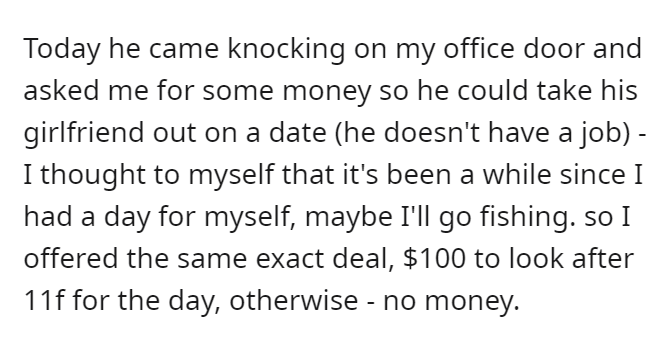 He was offered the same deal as before to earn his allowance. 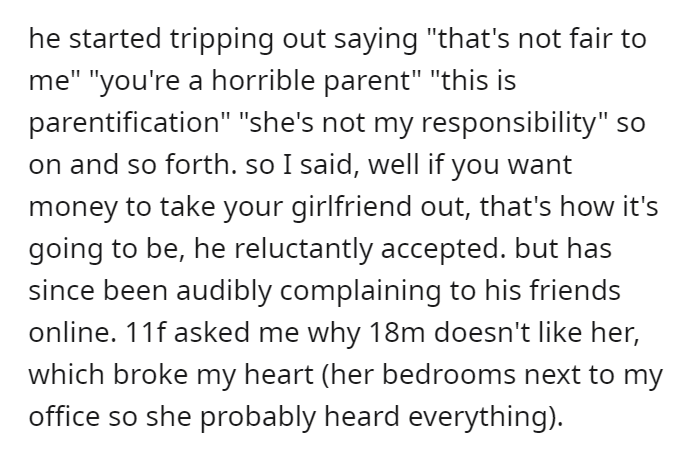 But that clearly didn’t end well as he started going off on his Father.

I think I may be an a**hole since I refused to give 18m any money unless he babysat his sister 11f. he started tripping out, calling it “parentification” which I had to look up and I don’t think this specific situation falls under that.

People in the comments were quick to take the father’s side.

As he wasn’t forcing his son at all. 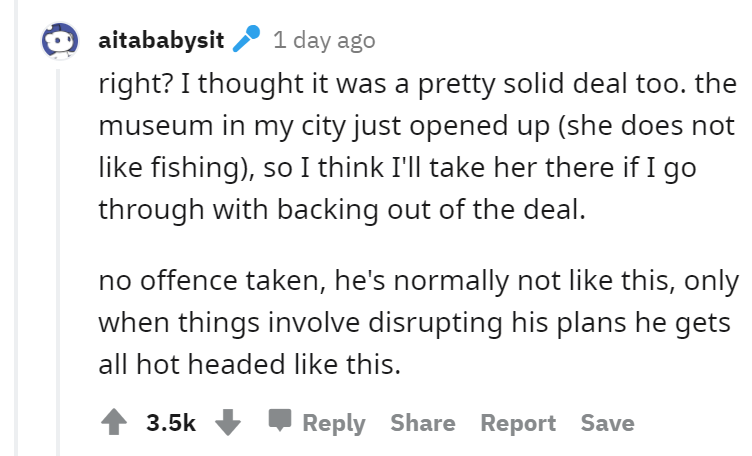 And his son is legally an adult and he should start acting that way as well. 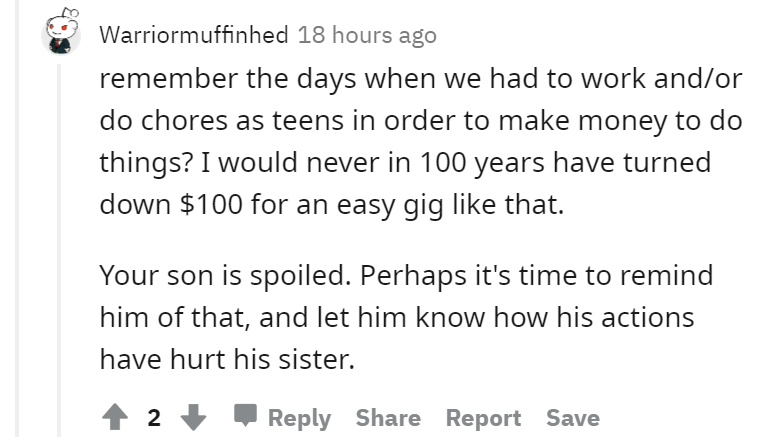 Many people commented on how he seemed quite spoiled. 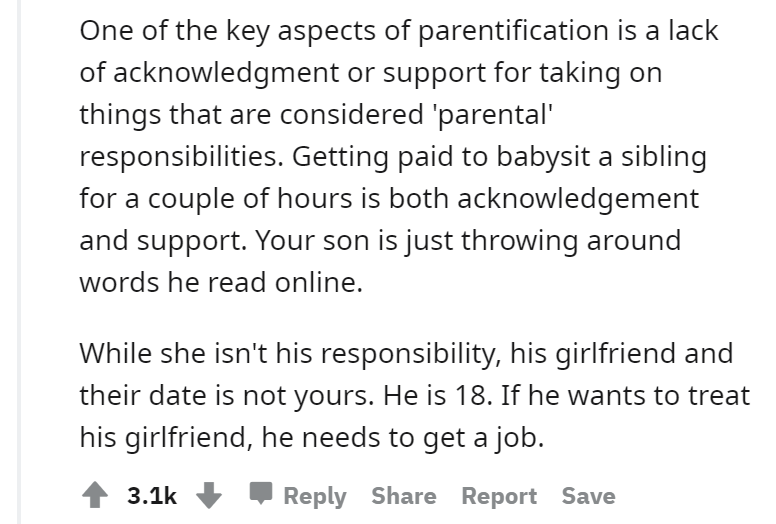 While others explained how the son was blowing things out of proportion. 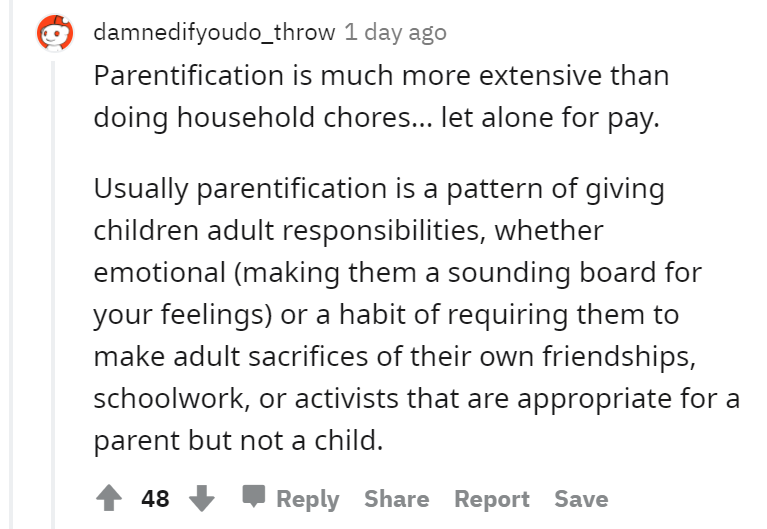 It is not unusual to help around the house. 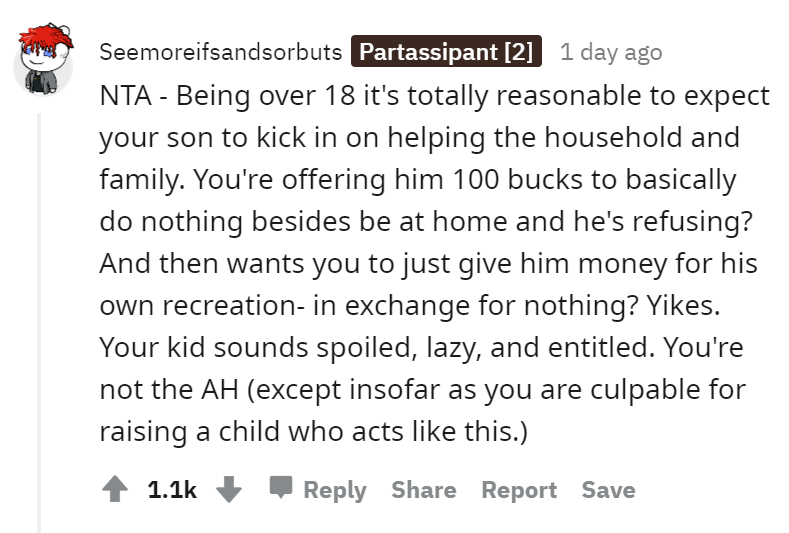 And that’s the way to build in resentment and sibling strife, honestly! They don’t choose to be there doing that, I’ve seen that kind of requirement lead to some serious sibling bullying (hell, as a younger sibling I’ve experienced it). I think it helps (if you can afford it) to pay – it helps them view younger sib more charitably and be nicer to them.

I paid my DD to look after her kid brother – only like $10 or so – but he had to give her a good report (i.e. ‘wasn’t mean to me!”) for her to get paid. And I have to say, monetizing it helped their relationship enormously! – she started to view him as a source of revenue and was much nicer to him, and took it more responsibly coz she could lose it – and he loved being taken more seriously & treated nicer by her. Win-win all round. –LandofGreenGinger62

And the Father could not help but agree that his son was indeed acting like a brat. 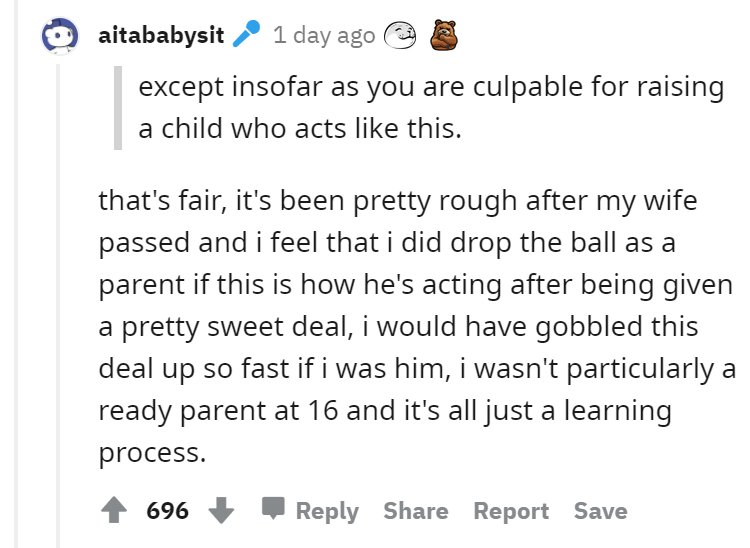 What are your thoughts on this? Would you have accepted this deal? Let us know in the comments below.