We have spent our childhood watching so many shows that eventually became the reason we had such a fun childhood. These shows completed our childhood and there is no other way we’d rather have. Even if some of these things were beyond our comprehension, we still managed to watch every single episode that aired of our favorite shows. They never got boring! We could not get enough of them. But even though we watched them religiously, do you think you really know your childhood shows and movies well? What if I tell you there are things about these shows and movies that you completely overlooked while watching them?

There are so many interesting fan theories that will make you view your favorite shows from a completely different angle! Spending the morning before school bus watching nickelodeon and then watching Cartoon network for hours in the evening, who would have thought that there will be things about these TV shows and movies that we will completely miss. Scroll down and stay tuned to find out!

1. Alladin is way ahead of our time! 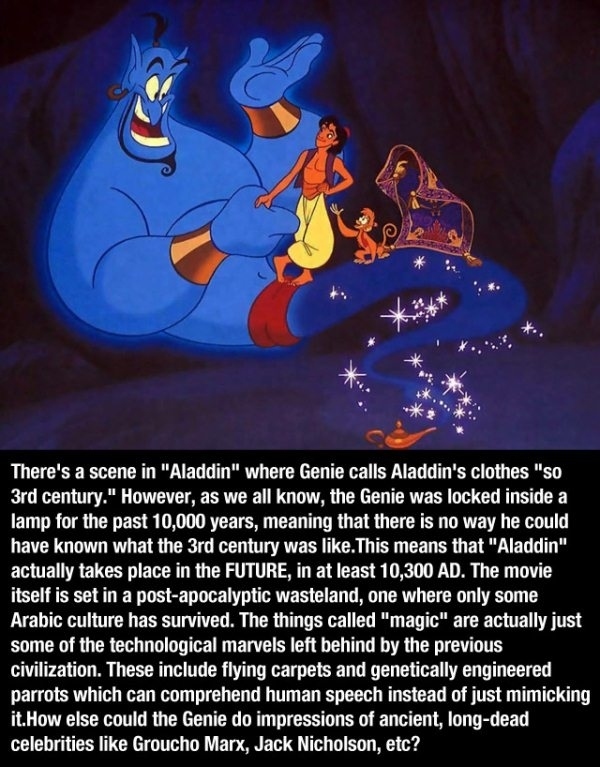 Wow, that’s something no one ever thought of. I personally never picked on this bit of information while watching the movies. In fact, I thought of the complete opposite. I found their clothes to be similar to the clothes people wore in old ages.

2. Insight into the first conversation between Snape and Harry Potter 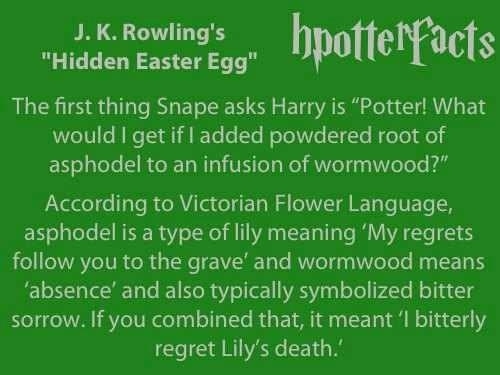 Woah! That’s such an interesting theory. Every new piece of information about Professor snape leaves you completely stunned. How did he go from being our least favorite to the absolute favorite character in the series? It’s things like these that set him apart and warm our hearts towards him It makes us empathize with him so much.

3. Babies in “Rugrats” were Angelica’s imagination

If you thought this was just a regular show with babies hanging around, think again! In actuality, all these babies in “Rugrats” were merely an imagination of Angelic. They did not exist. Chuckie passed away with his mother, which is the reason why his father was always a complete mess. Tommy was birthed as a stillborn, which is something his father, Stu, never recovered from. Instead, he spent a considerable amount of time making toys for his lost son. Lastly, DeVilles had an abortion. Angelica never came to know about the sex of the baby as a result to which she started imagining twins in her head, each of different sex e.g. a boy and a girl. “None of the babies in “Rugrats” actually exist, but they are all instead figments of Angelica’s imagination, as result of her parent’s negligence. Chuckie died with his mother, which explains how much of a nervous wreck his father is. Tommy was a stillborn baby, which explains why his father, Stu, was always in the basement making toys for the son he never had. Finally, the DeVilles had an abortion. To compensate for not knowing the sex of the baby, Angelica invented twins in her head, one boy, one girl.”

This is absolutely insane! How did any of us never picked on this when we were kids? Well, to be fair, it was never this clear. But wow, all of us really need to watch this TV show again. I am feeling very nostalgic after reading this.

4. “Samuari and Jack” is set in the same but post-apocalyptic universe of “Powerpuff Girls”

OH MY GOD! What? I cannot come to terms with this. This is so fascinating! We used to watch both shows religiously and I am sure none of us realized this at all. Two different shows sharing the same universe are always intriguing. Although, it’s so sad to see Townsville in ruins. I am having so many questions. What happened? And why weren’t Powerpuff girls able to rescue the world?

5. “Hercules” and “The Lion King” are set at the same time

Damn! Another new piece of information. I feel more intrigued after every image. Who would’ve thought? Although, I am sure we are all very satisfied after this one. Seeing Scar being used as a rug is all we wanted to get closure from what he did to our dear Mufasa. 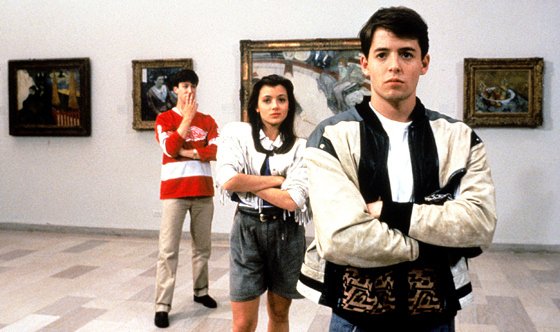 When he was sick in his bed, Cameron allows “Ferris” to steal his father’s car and go on leave. Cameron takes this opportunity to discover the city. Any exchanges that he had with Ferris and Sloan as well as the hijinks were mere his imagination. This is why they all were able to discover Chicago so much in only a span of one day. The Ferris and Sloane were not real. 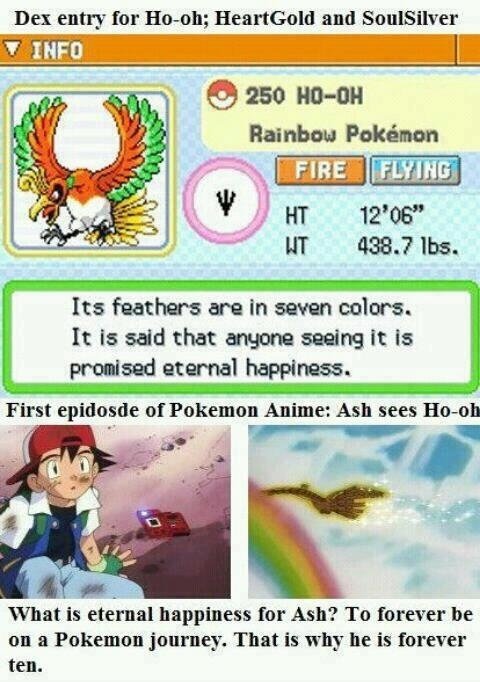 8. Characters of “Spongebob” are actually mutants 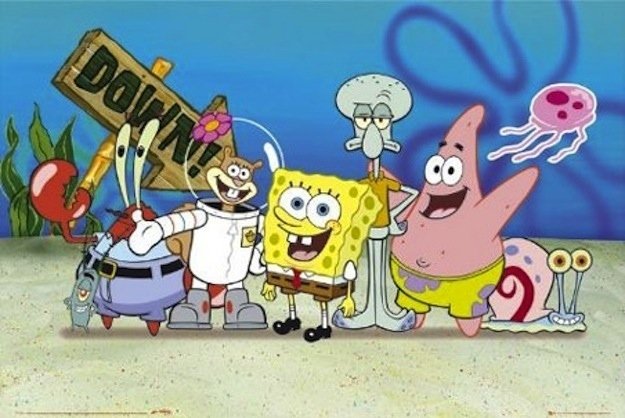 Just when we thought our favorite characters couldn’t be any more cooler, we get to know more about their specialties! Re-watching would be so much more fun now!

9. The real Horcruxes of J.K. Rowling 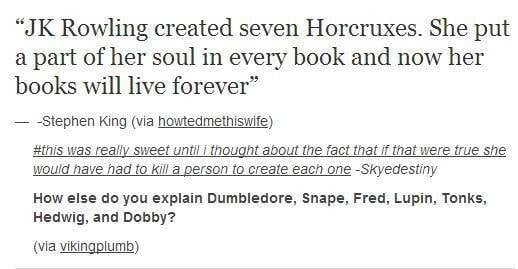 That’s some dark bit of information! And of course, who else to release it than Stephen king?

10. “The Walking Dead” and the “Toy Story” are the same story

They both sure look very similar!

11. Madame Foster and Frankie are the same people! 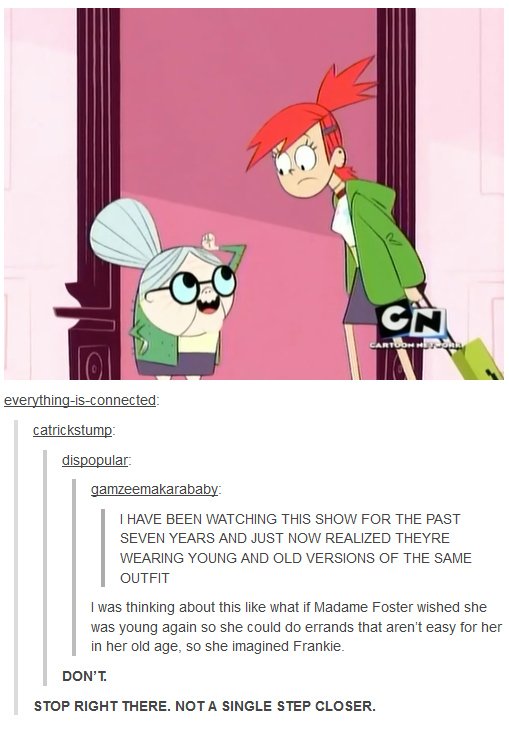 Oh my God! I never noticed before either. This is such a big twist. Now if you think about it, it’s very much possible. I mean, what other explanation can there be for their similar clothes? 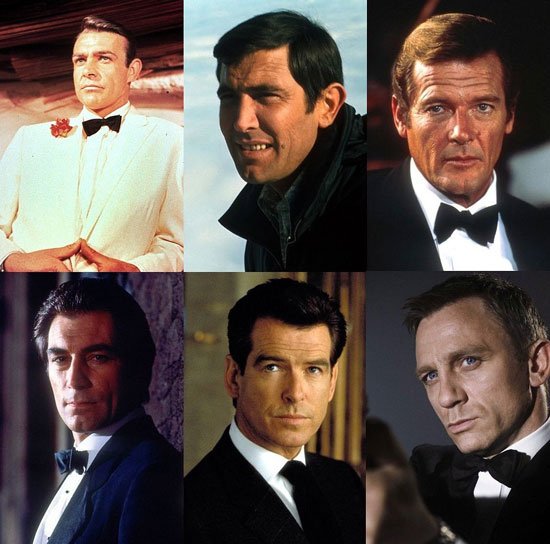 While Bond is only one person, “James Bond” serves as a codename in the way “007” does. Shocked? Just imagine, this gives space to have different actors playing the role too. It makes much more sense this way! 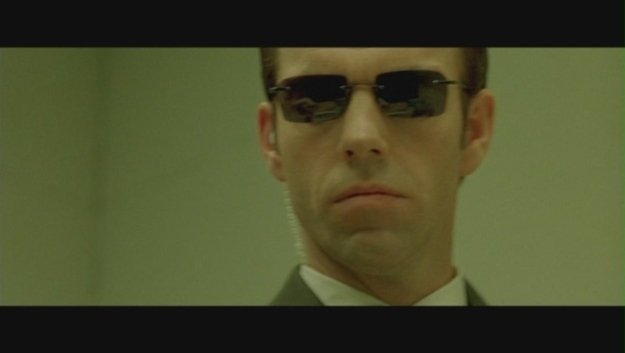 “>Zion is destroyed six times.
>Six agents shown throughout the series.
>Smith, “I hate this place”
>Smith able to break the rules of the matrix-like Neo
>Each matrix program produced “the one” who would try to resist and break the system down.
>The matrix converted these special people into agents.
>Smith was the first “one” and went insane during six matrixes making him lash out against the machines and try to kill Morpheous. He was also the most emotional out of all the machines who were usually emotionless.
>He was able to come into the real world through a phone, something that should be impossible because as a machine he isn’t connected to a real body.
>As a human-made to believe he was a robot, he recognized Neo and worked with him to end the matrix.”

14. Suicidal ideations in Doc in “Back to the future”

“Doc is suicidal during the scene where they test the time machine. Not only has he never tested the machine, but he says that most of his inventions have been failures. Because of this he not only drives the Delorian towards himself but grabs onto Marty so he cannot run away.
If his invention failed, they would have both died. Which is exactly what Doc wanted.”

So basically, DeLorean was made as a death machine after repeated failures.

15.  Courage is nothing but a regular dog 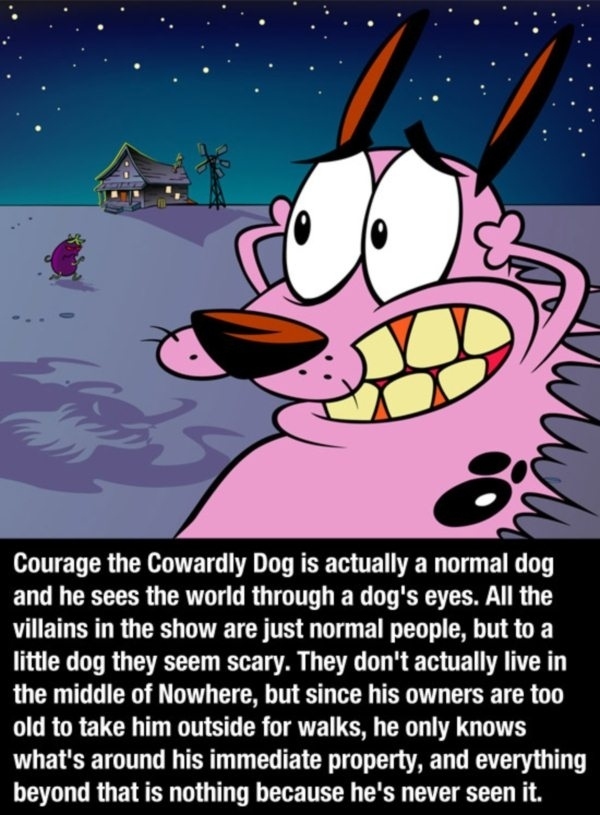 This makes complete sense! Our precious dogs do get angry and aggressive sometimes at new people and it is only because they are so unfamiliar with them, that they start feeling scared. The unfamiliarity leads them to fear and that is why they bark. Now that this theory is out, it feels nice to know that someone made a show from a dog’s perspective. It looks like we found ourselves the biggest dog-lover ever!

16. More detail into the ending of “Inception” 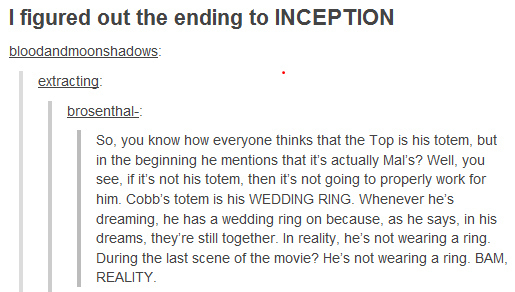 This movie gets more twisted every time you talk about it! What more is there to this movie? It is truly made by a mastermind.

17. Super Mario was actually a show 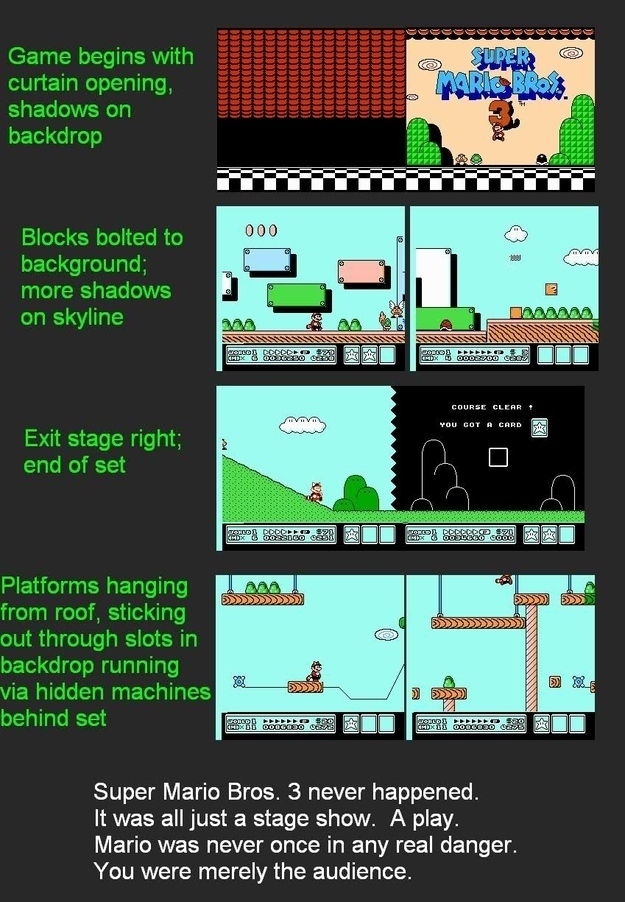 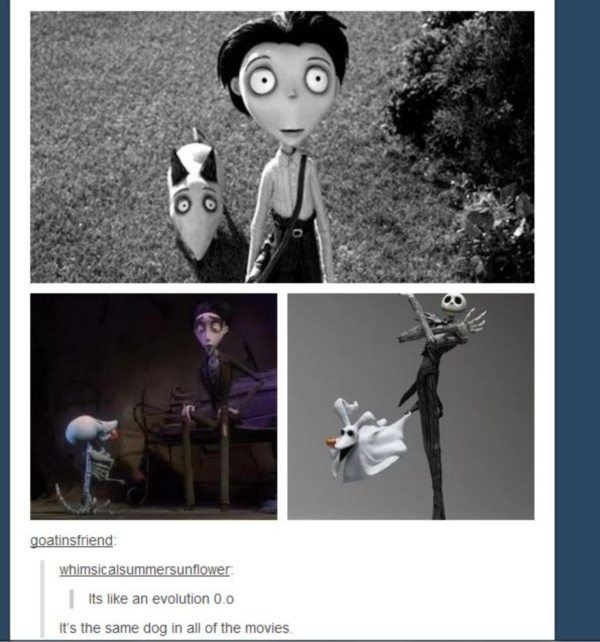 That is the creepiest realization we have ever come across! As if these movies could not get eerier. But well, no one can deny it for sure. 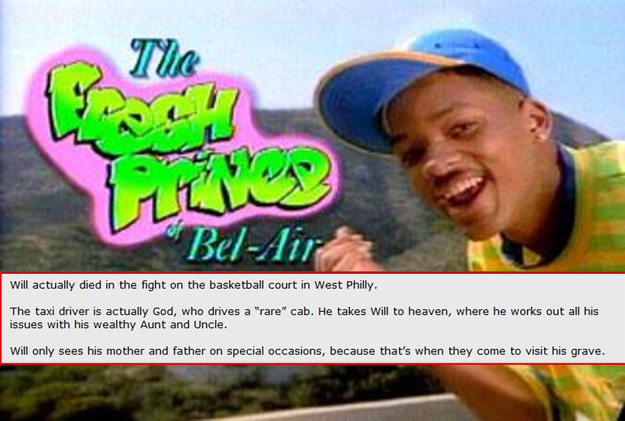 We never thought so much could be revealed of our favorite childhood shows and movies in just one run. These were really opened our eyes. They are making us look at our characters in a completely different light. I don’t know about you, but I am imagining every scene that I watched and thinking whether I ever paid close attention to what was really happening in the show or movie.

Did you already know all of these or were these as shocking for you as they were for us? Let us know in the comments section below!