The title of the story definitely sounds too much to absorb, right?

Most of the hardcore dog lovers might already be offended over it but we would request everyone to hear out the story first before being judgmental about it. Before we being with the story, you must know that the girl doesn’t really like dogs in general but that does not make her a dog-hater. The a-hole in question has got absolutely nothing with dog love, it’s about animals’ safety in general. The OP has various types of small animals and she was worried about her animals being harmed by her BF’s dog.

The dog had a history of killing a rabbit in the past as well which is why the OP was too concerned about her small animals which included, cats, gerbils, etcetera. However, the boyfriend still had the audacity to bring his dog over to her GF’s apartment while he could have just left him at home. But we cannot really know whether the girl overreacted to this situation or was she right until we go through the entire story. So, are we ready? Let’s go ahead and read the story!

1. So the girl goes ahead and asks Reddit whether she was the a-hole for kicking out her BF because of his dog?

2. That is true, a majority of people would already be judging her for not being a dog-lover. But you should keep in mind that this isn’t what it’s about. It’s all about who’s the a-hole.

4. Since the dog has not caused any issues ever, I can’t seem to understand what was the problem with letting the dog over?

5. The girl had anxiety about it which says a lot about her overreacting perhaps? 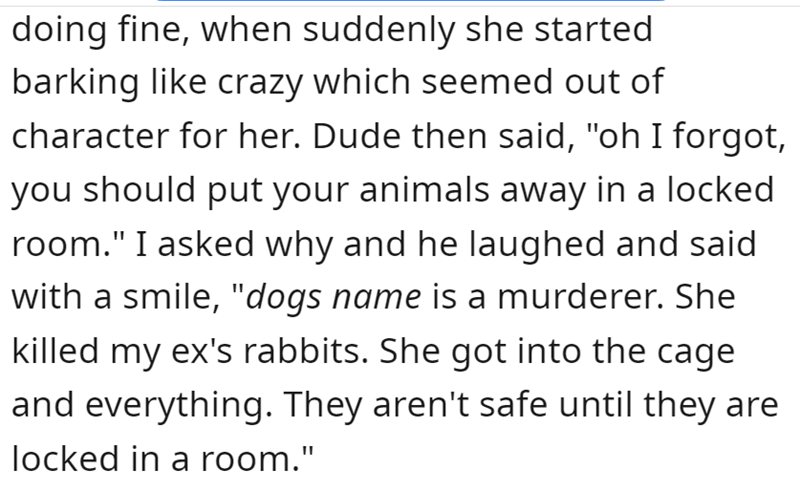 7. Although she could have talked things out politely but she was hurt too.

8. That’s a bit too extreme. Pushing your BF out of your apartment just because her dog barked, is definitely not acceptable behavior.

Not saying that she’s an a-hole here but she could have handled the situation in a better way instead of being too aggressive about it. However, since the objective of the situation revolves around judging the actual a-hole, in this case, it’s definitely the BF. And we are not the only ones who thought so.

9. This guy completely agreed to it and said that you don’t have to love a dog too blindly.

While this might sound bad to some of the hardcore dog lovers, it’s still how it should be. You should not love anything or anyone too blindly that you forget to differentiate between right and wrong. Anyway, that was the end of the story and we would like to know your opinions and thoughts regarding the story. Feel free to use the comments section below.