Anyone who has spent a lot of time around animals wouldn’t doubt their intelligence or their ability to surprise us.

There are times when we are unable to handle an animal or understand its emotions exactly. However, they sense each other very well despite being different – like a cat and a dog. They can recognize when one of them is feeling tense or upset over something, especially dogs, and they often try to calm the other by being with them and supporting them however they can. Too hard to believe? We understand because we have always known them to be rivals mostly rather than friends. However, the world can be a very scary and gloomy place to live sometimes, but such heartwarming animal stories, like the one mentioned below, are guaranteed to cheer anyone up.

It might be very weird to see a bond of friendship between a cat and a dog but get ready to be mesmerized by this heartwarming story of a giant lab named Truvy who befriends a distressed, rescued Siamese kitten until she becomes ready to be adopted by her new parents. Betty, the cat, was found abandoned by someone when she was around 5 weeks old. She was then brought to Jelly’s place, which happens to be an animal shelter located in San Pablo, California. Even though it took some time for Betty to open up and become friendly – Truvy did not give up at all.

So, what are you waiting for? Scroll down to read this beautiful and uplifting story about how a Lab helped turn a scared kitty into the friendliest cat ever!

This is Betty, the rescued Siamese kitty. 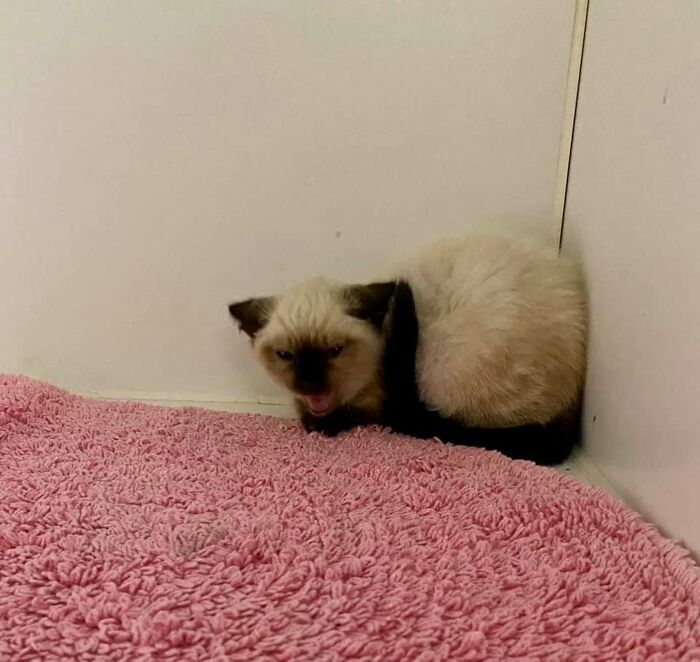 She was brought to Jelly’s Place animal shelter in San Pablo, California. 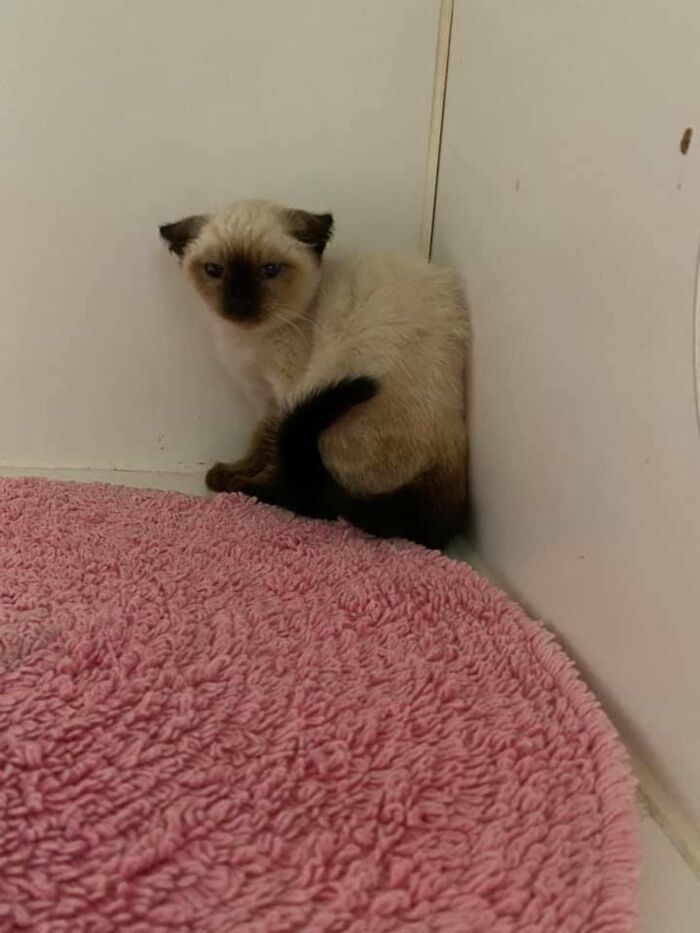 She was super scared and terrified at first.

A volunteer named Kendal Benken at the Jelly’s Place animal shelter told, “I volunteer with a non-profit shelter called Jelly’s Place located in San Pablo, CA. Someone in the community had found her abandoned and brought her in. Our best guess is that she was a kitten in a feral colony,” 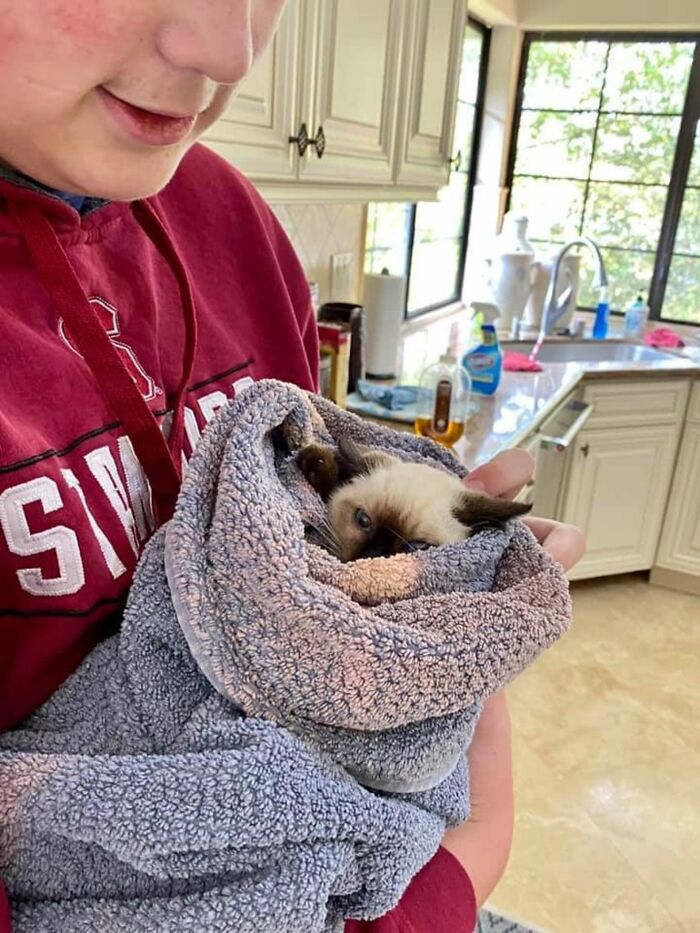 “She was super scared and very hissy at first. No one could touch her,” Kendal told us. “We weren’t even sure if she was a male or female. She was only 5 weeks at the time, and most likely had never had human contact.”

The dogs seem quite fascinated by the little ‘thing’ in the cage. 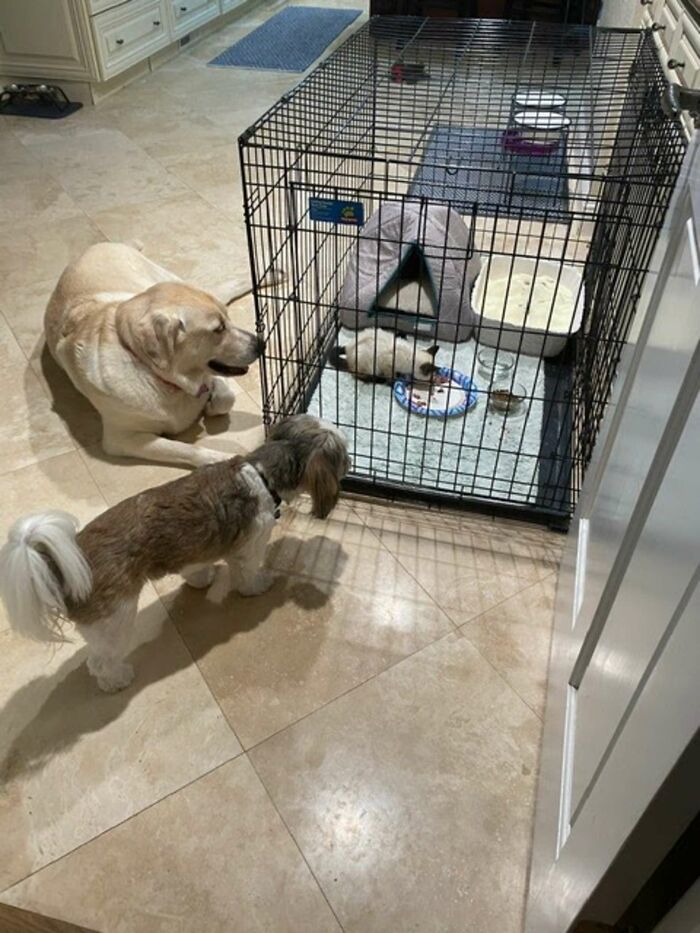 Kendal told that it required some time for Betty to open up as she used towels to wrap the kitty and bring her home which gradually led to Betty trusting Kendal. “She was not happy at all. But honestly, she was just really scared. With feral kittens, the best thing you can do for them is to put them in the center of everything and not let them hide,” Kendal explained. “So I put her in a big dog crate in my kitchen. As often as I could, I would hold her, wrapped in a towel, and pet her head.”

Turvy is truly the sweetest dog ever! 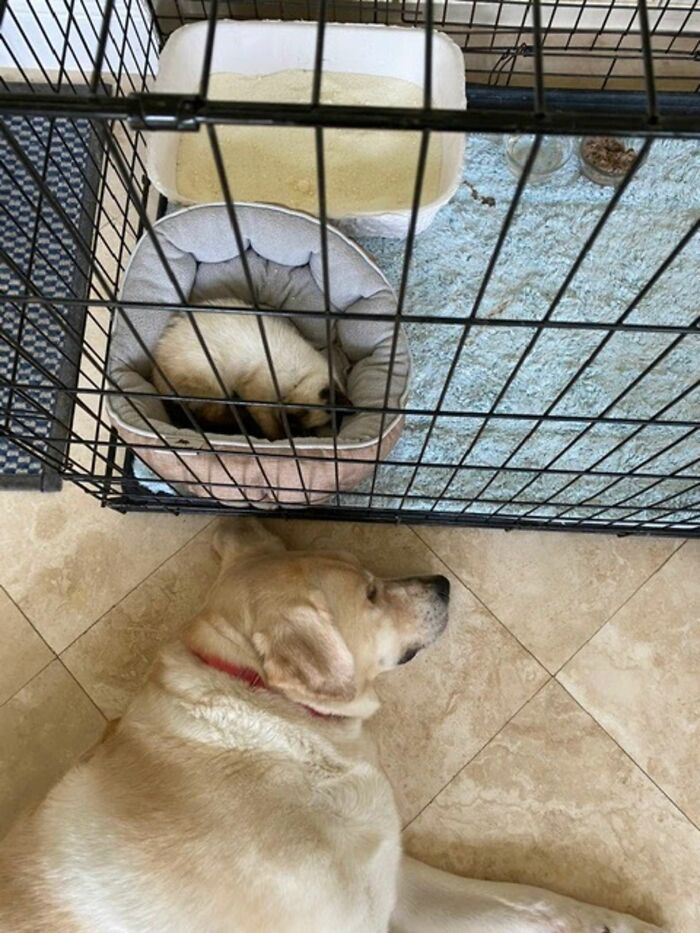 Even Kendal’s rescue dogs seemed quite interested as they saw Betty who was being very unfriendly at that time. Despite that, the dogs were super delighted at the arrival of this new guest, specially Truvy – the giant yellow lab mix.

“Truvy LOVES kittens!! She must have been a mama cat in a former life. She was always licking her head when I would hold her,” Kendal told us

“She was always licking her head when I would hold her,” Kendal told! 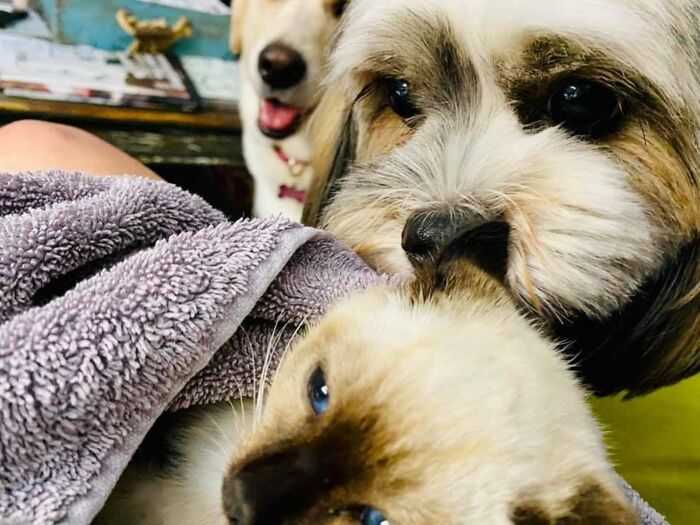 With the passage of time, it was observed by Kendal that Betty was gradually settling in the new place and getting used to Truvy, with whom she finally agreed to be friends. “I think because Betty was so young, she just accepted that it was normal for a giant dog to clean you. Betty absolutely loved Truvy and would curl up to sleep on her any chance she got,” Kendal told us. 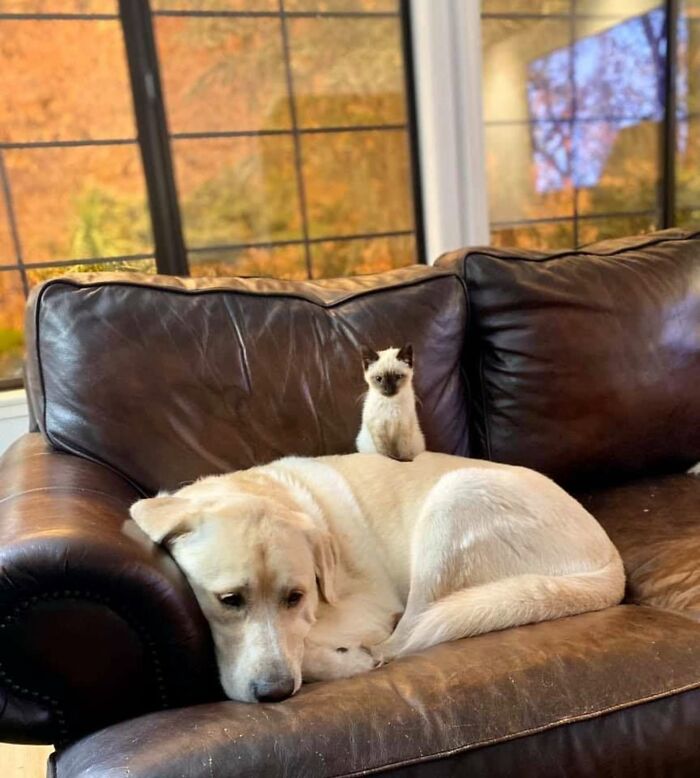 Kendal observed that eventually Betty became so friendly that she was ready for adoption. “Once Betty stopped being so afraid, she was actually a really sweet, playful kitten. It was really hard for me to give her up. I really loved her. But Roz was the perfect person for Betty! We still stay in touch. So I’ve gotten to watch Betty grow up,”

Their love for each other grew every day! 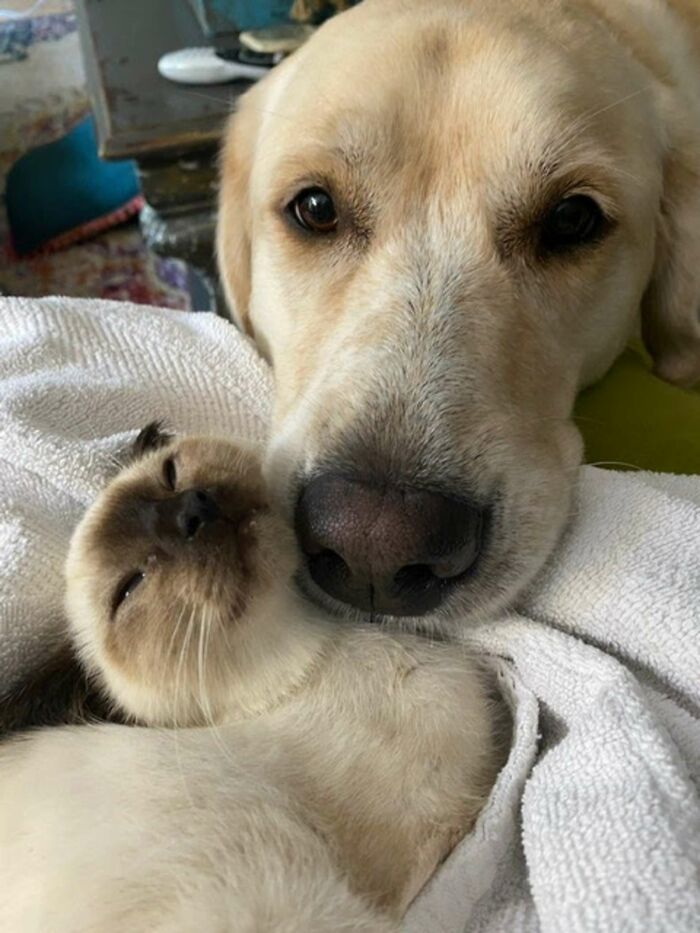 “The only thing I would like to add is that I wish more people would consider fostering, both cats and dogs. I know it’s hard giving them up. But the reward of taking in a scared animal and helping them gain the confidence to be a great dog or cat for someone else is really a wonderful thing. And fosters are desperately needed across the country by shelters and rescues,” Kendal further told.

Here are some of the comments on this story:

On this note, we end our article and hope that this unique tale of friendship warmed your heart and put a smile on your face, too. Animals have different ways of mesmerizing us with their behaviours and this time it was a dog and cat who stunned us with their friendship which proved to be life-changing for little Betty. We would love to hear your opinions about this story. So, do not forget to leave a comment below. Or if there is an interesting story to tell, we’d love to hear that too!