This tradition really needs to go.

There are hundreds of countries in the world, each one of them has its own special cultures and traditions that are very different from each other. Love is universal though we can not say the same about marriage because every country has its own special traditions and rituals for marriages which makes them seem unique and different than others, giving them a whole new identity. Many countries are mainly known for their beautiful and unique cultures. Some might find these cultures strange but they are there for hundreds or thousands of years, passing down from one generation to another so it is hard to let them go. But some of them happen to be very unethical and bizarre, people need to say bye to them.

One of them happens to be this bride’s family tradition that makes the groom spend the night with his mother-in-law. Yes, you heard it right. It is a real tradition and definitely an uncomfortable one. The groom found out about the bride’s marriage tradition that she really takes seriously which he was not willing to follow at all costs caused a major drama a month before their wedding. Keep on scrolling down to read the whole story in the groom’s own words… 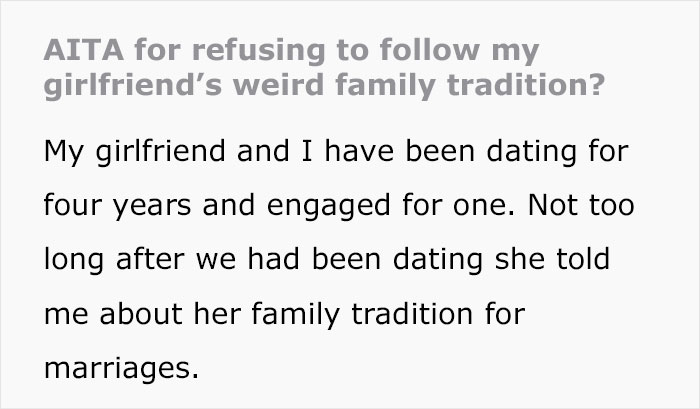 2. So this is the bride’s marriage tradition. 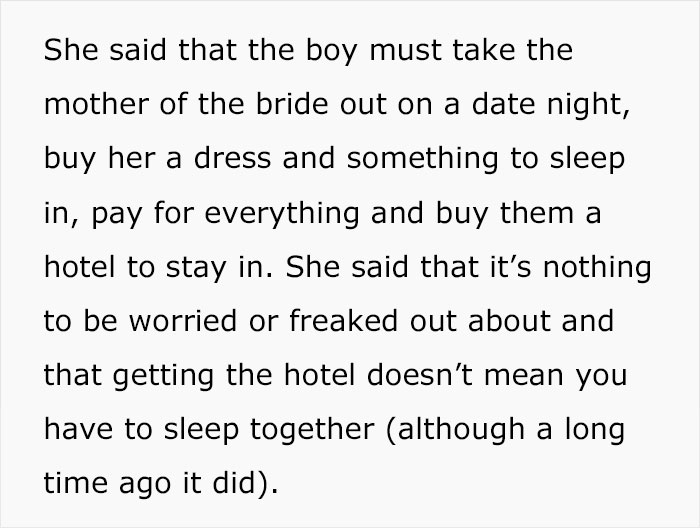 3. The topic came up again when their wedding was nearing. 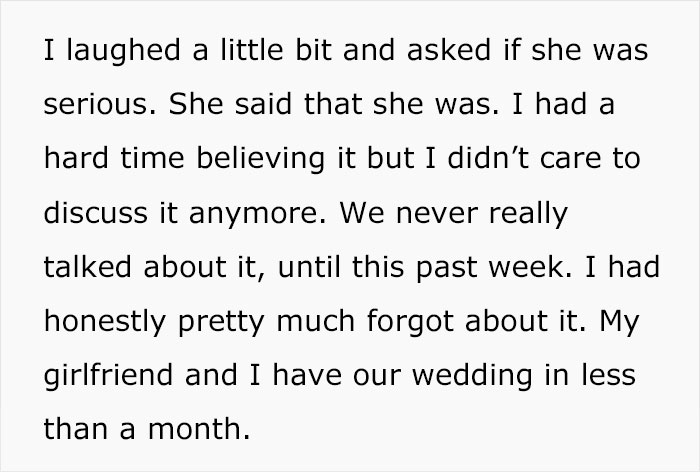 4. The bride was really serious about the groom following the tradition that she kept on insisting. 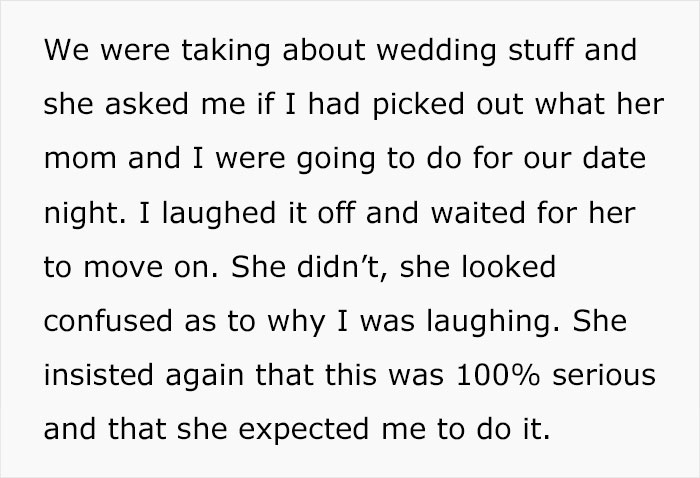 5. I just can not comprehend how can it possibly ‘kick off’ the marriage. 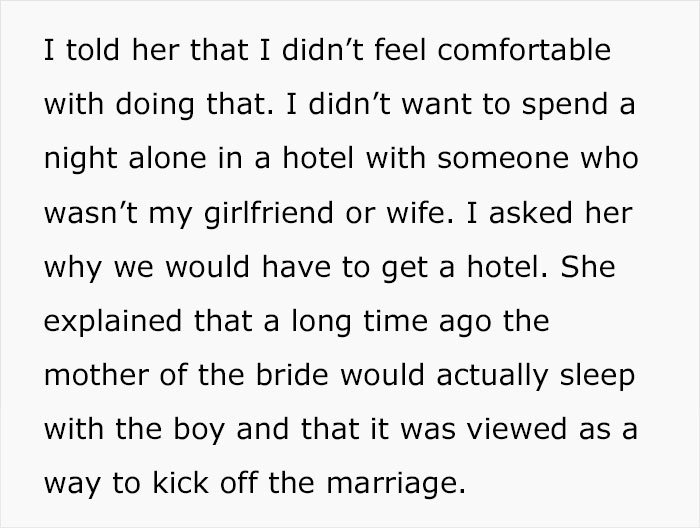 6. The whole concept is just totally weird and unacceptable in every kind of way. 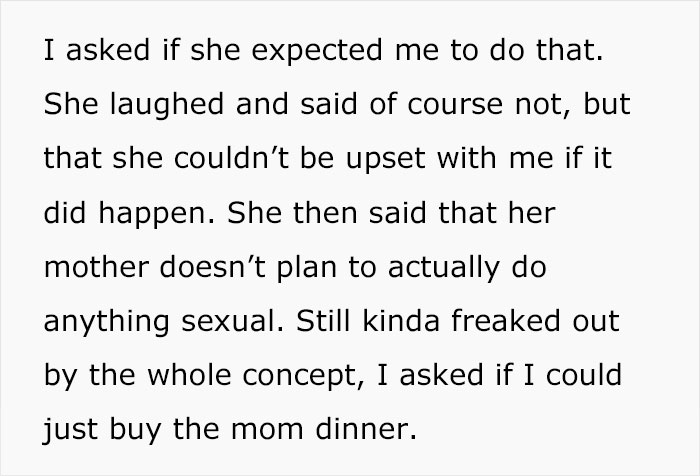 7. I just can not believe that she is literally forcing him to do this. There is nothing fun about it, just creepy. That’s it. 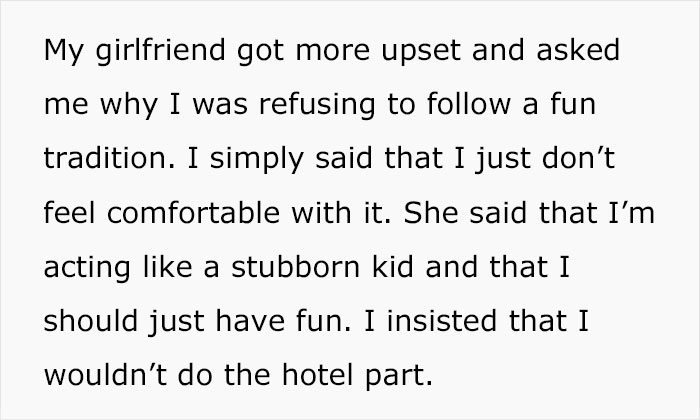 8. The mother-in-law is the only sensible one in the family, clearly. 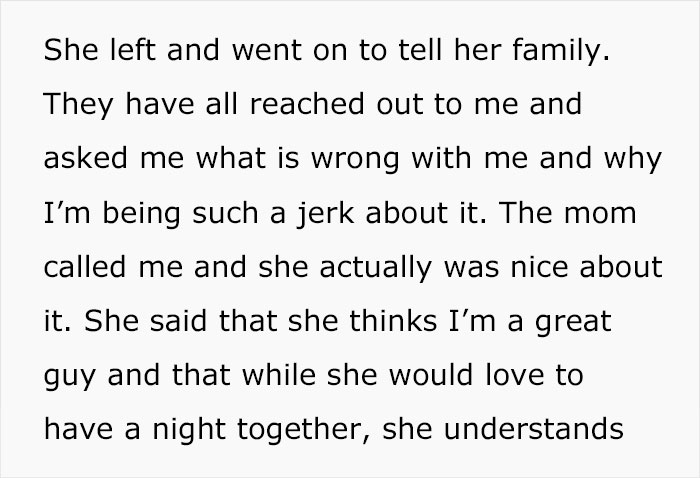 9. It must be a really uncomfortable situation for his mother in law too.

10. He asks people of Reddit to give their opinion on the matter. 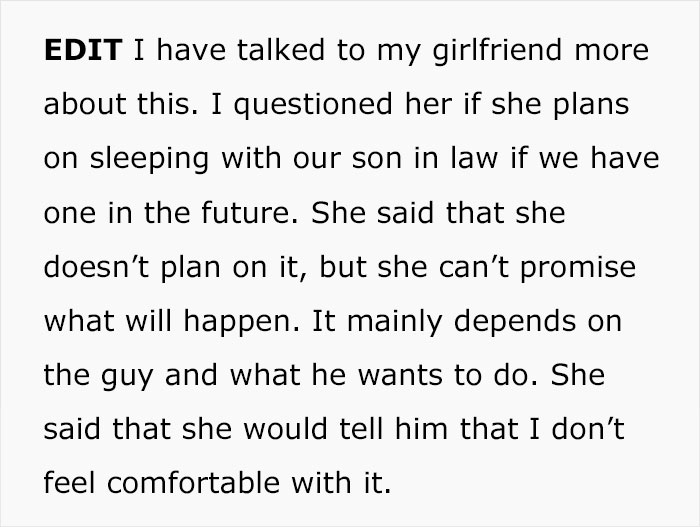 I just can not believe this is a real tradition and this conversation actually happened between a couple about to get married. Totally unacceptable. There is no way this is morally or ethically correct. I just can not imagine a bride forcibly trying to convince the groom to have a proper date and spend the night with her mother, practically asking him to sleep with her. This is the strangest tradition I have ever heard about. It just does not feel right at all, the way she got really mad at him for saying no, she should just let him be instead of making a big deal out of a silly tradition. Besides that, I am really shocked how she indirectly hinted that she is willing to do the same with her own son-in-law because she does not find it weird at all. She said that to her future husband. A few days before the wedding. This is insane. Keep on scrolling down to read the comments of people…

12. It is actually very upsetting.

13. TRuly, sounds more like a personal choice than an actual tradition. 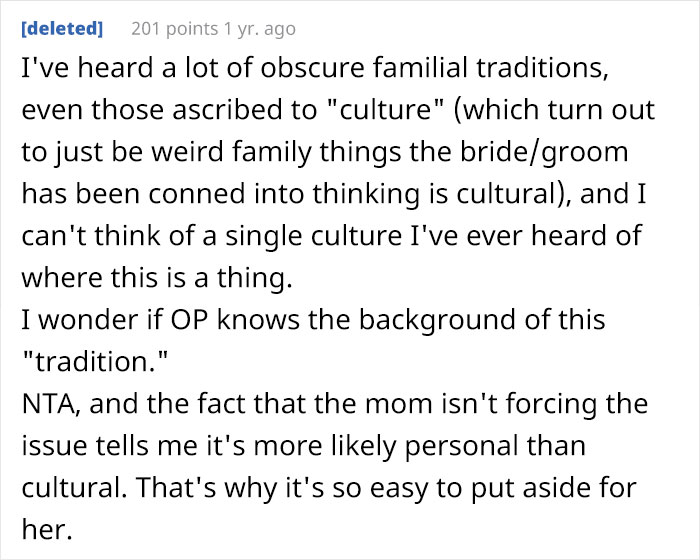 14. This is literally cheating, not okay at all. 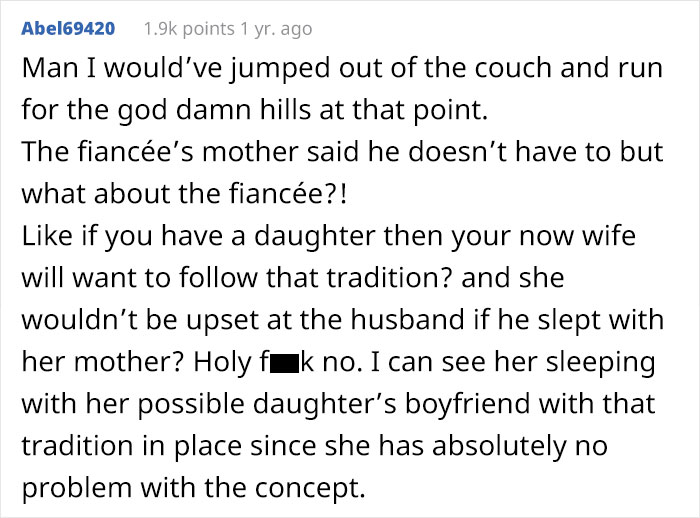 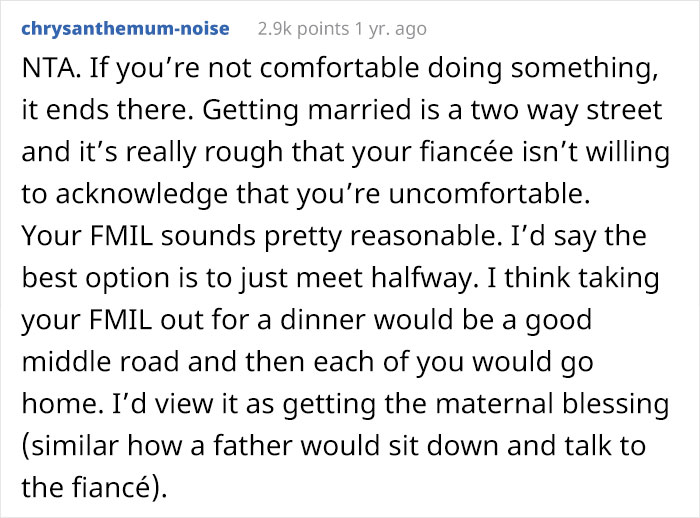 16. This is such a messy situation. 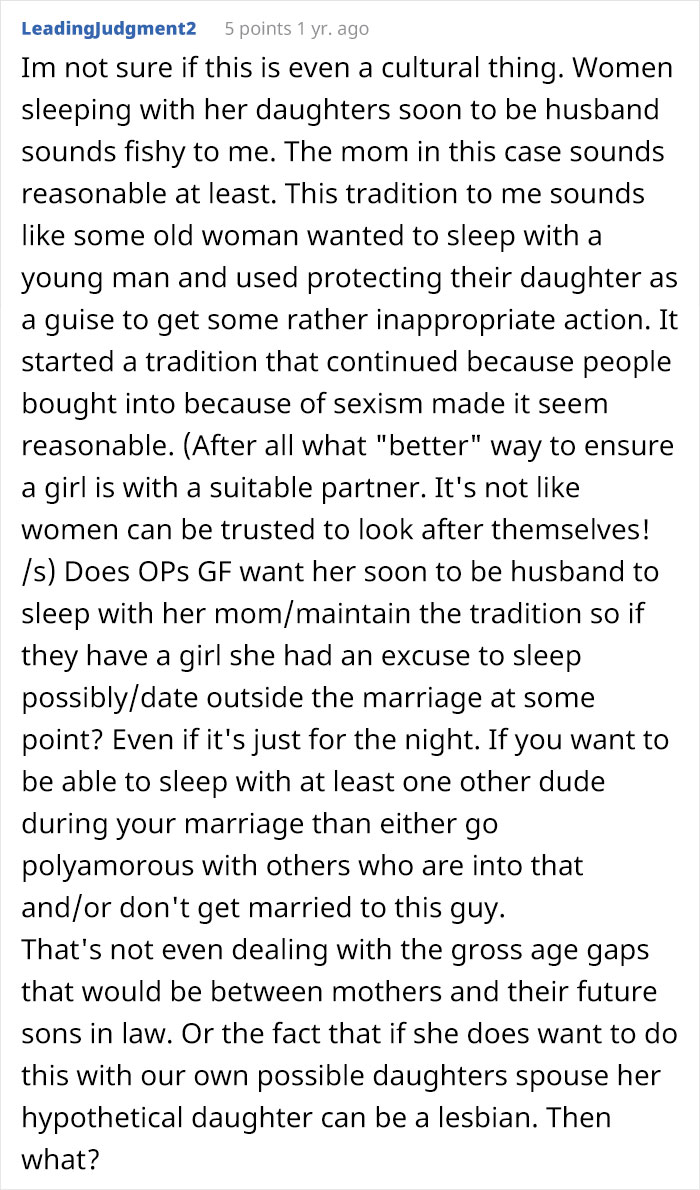 17. The groom should really think this through before the wedding. 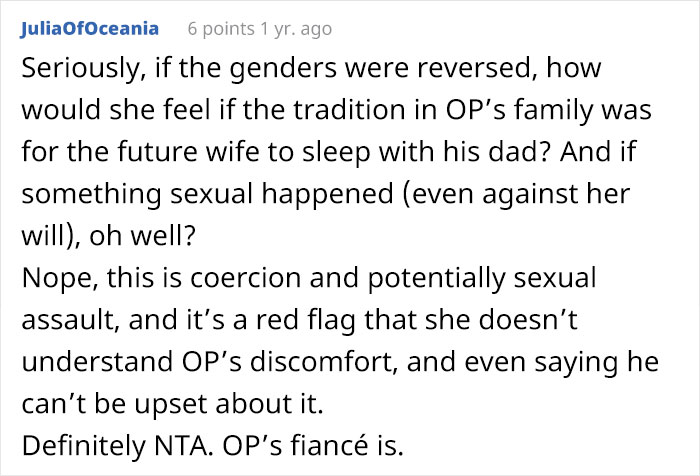 18. The groom and the mother-in-law are in such an uncomfortable position, I would not be able to make eye contact after this kind of discussion. 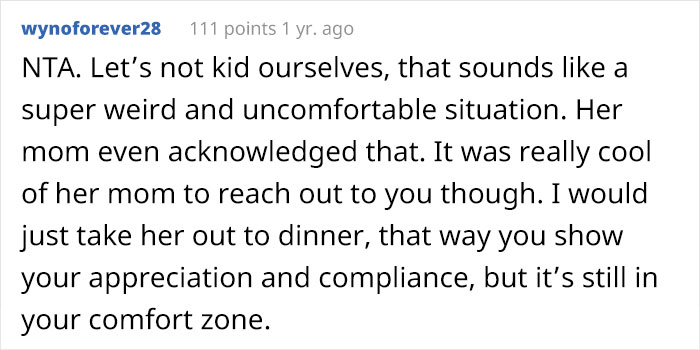 19. Sounds like a good idea but this whole concept is just completely unnecessary. Someone really needs to put an end to it. 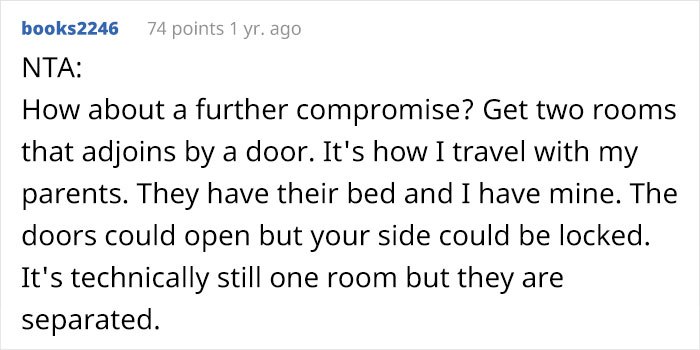 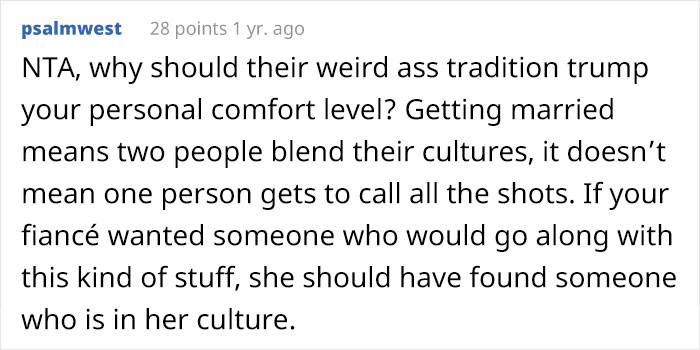 I still can not believe this is a real tradition, these people need help. What are your opinions on this? What weird traditions have you heard about? Tell us in the comments down below…