There’s a lot to unpack, digest, and process here, and not all the information is readily given or even available. And the story the user tells isn’t even all that chronologically efficient, so allow me to help set the scene. OP has a very famous cousin, who does famous people things in famous people places. That said, as a famous person, he needs to put up a caricature of himself at all times so that he’s interview ready.

It gets exhausting, according to him, to do it all the time, which is why he has requested that in family gatherings, it’s strictly only family. Especially since the OP in question once brought a girlfriend to a family gathering which resulted in her selling the story to TMZ to make money. If that wasn’t enough, this Christmas event seemed like a spiteful way of going about doing what he wanted. Check it out yourself. 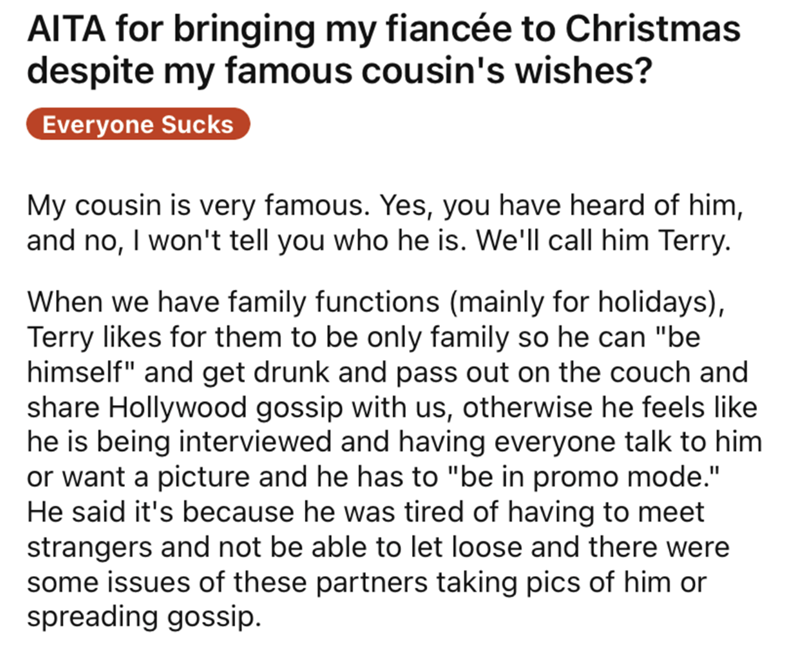 #2 No one likes telling people they are going to be left out. 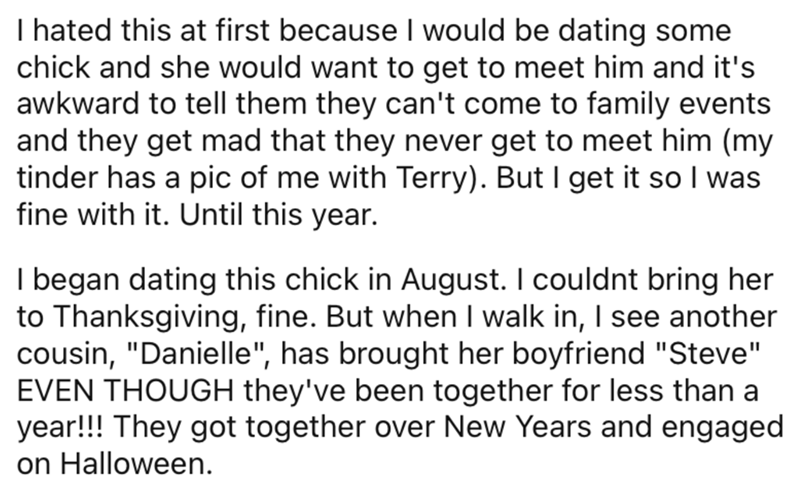 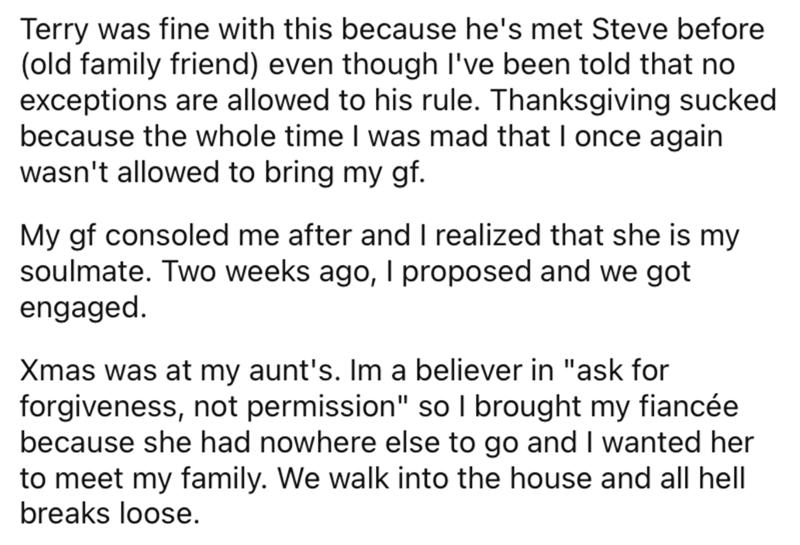 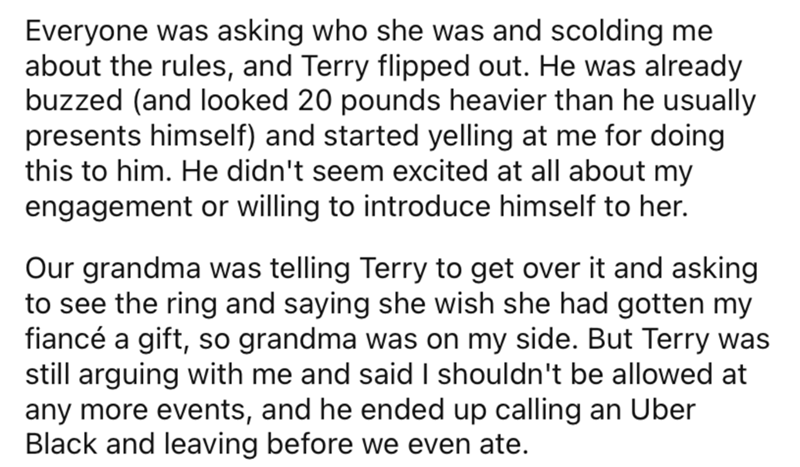 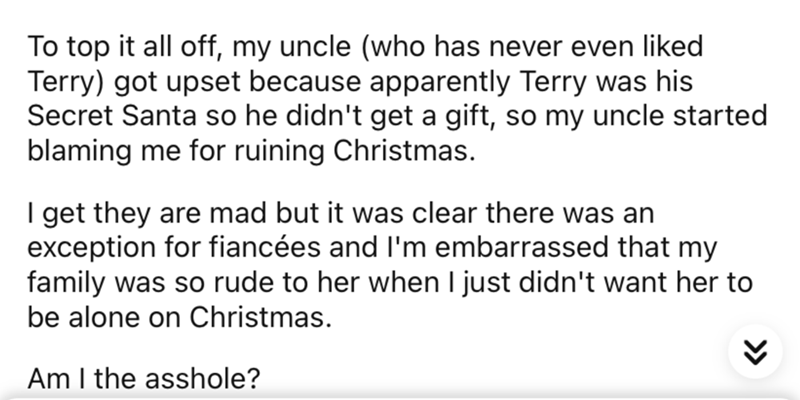 People did not hesitate to give him a piece of their mind:

You could have ask. You could also not use your famous cousin as a pic on Tinder.

“twice before. once when i was 19 and an idiot so that didnt work out. then again later on and i thought she was the one but it ended when she sent a story about my cousin to tmz to make a quick buck… hence terry’s rule”

It gets worse when you realize that one of the girls he was previously engaged to sent in a story about his cousin to TMZ.. 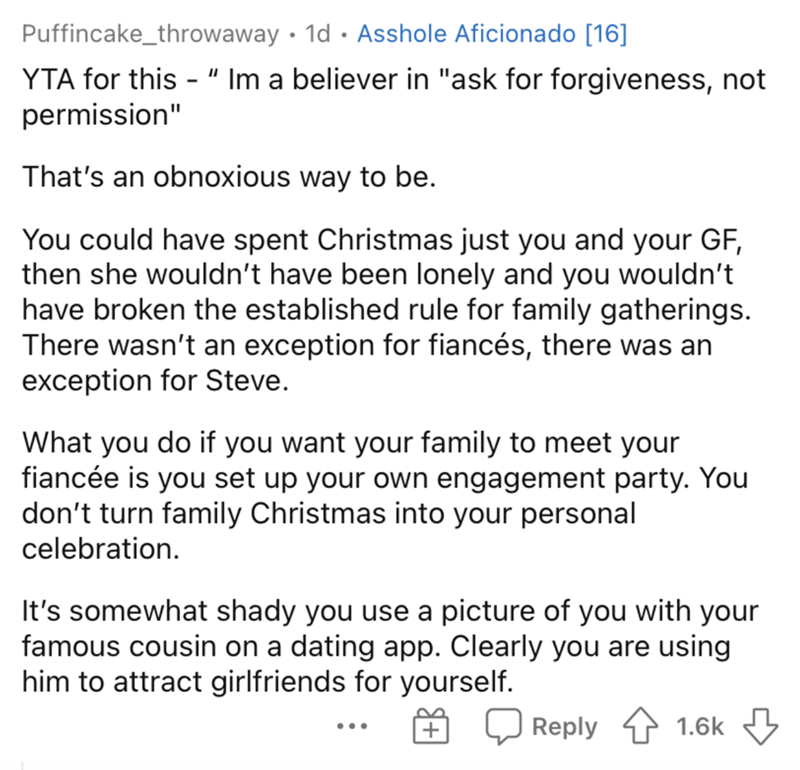 #7 A convenient part of the story seems to be left out.

#8 He also didn’t tell him in advance! 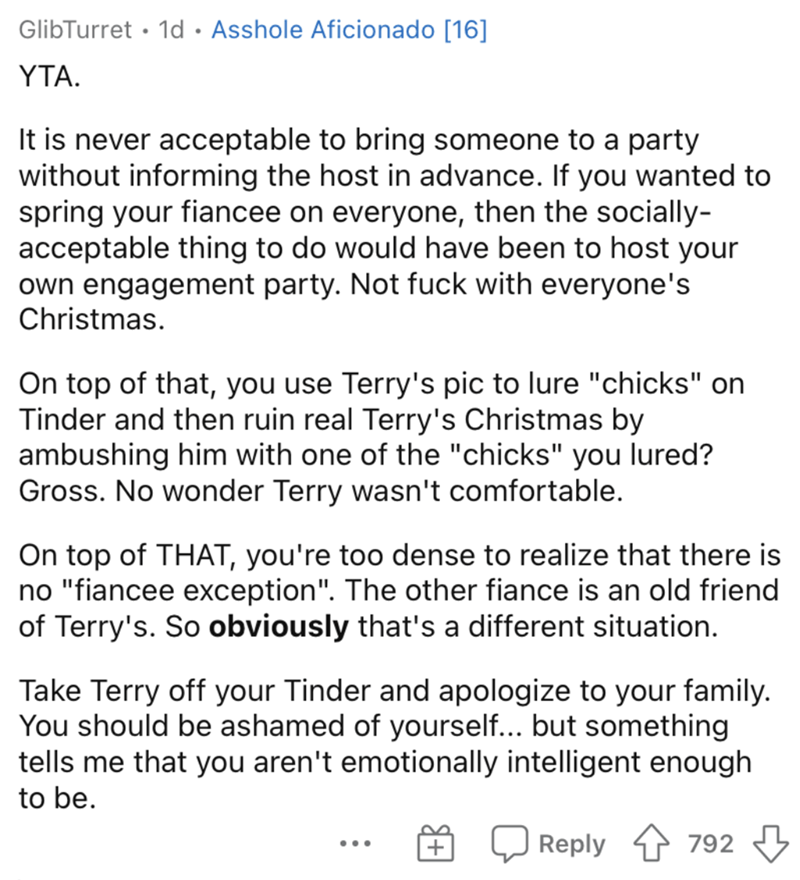 I think that it is technically OP’s fault and the girl’s. OP posted a pic of him with his cousin on his dating app profile, because way more girls match with him when they see that pic. More girls are matching with him bc they want to meet the cousin. Its not surprising that most of the girls that are huge fans would post a pic of the cousin/invade his privacy in some way.

I just want to add, that obviously this isn’t to say that only girls don’t respect other people’s privacy. there are loads of guys who don’t either (like OP for instance)

#9 So far no one thinks he was in the right. 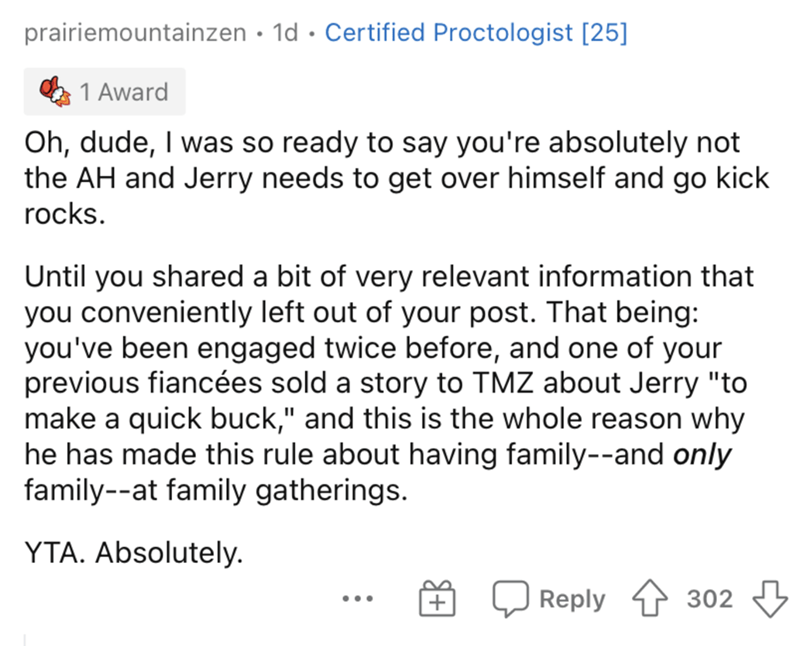 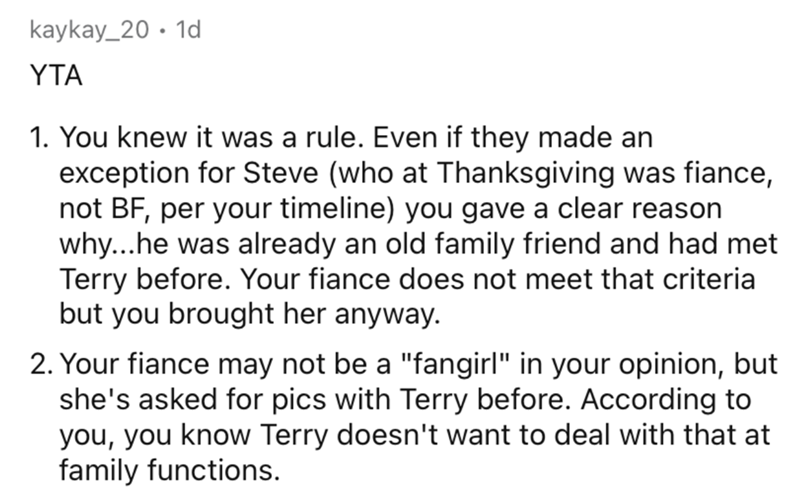 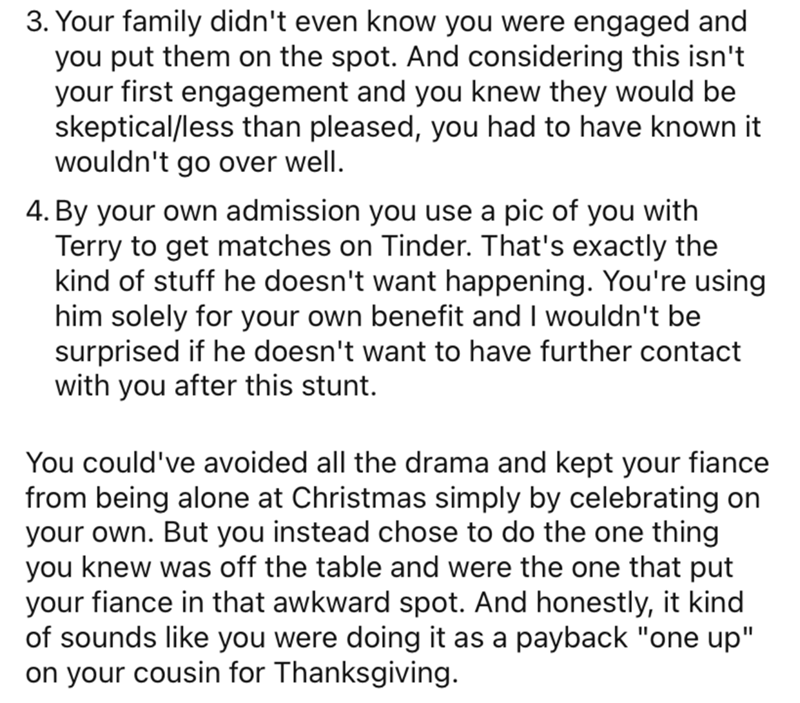 #12 Used his face to meet girls and he thinks he’s in the right? 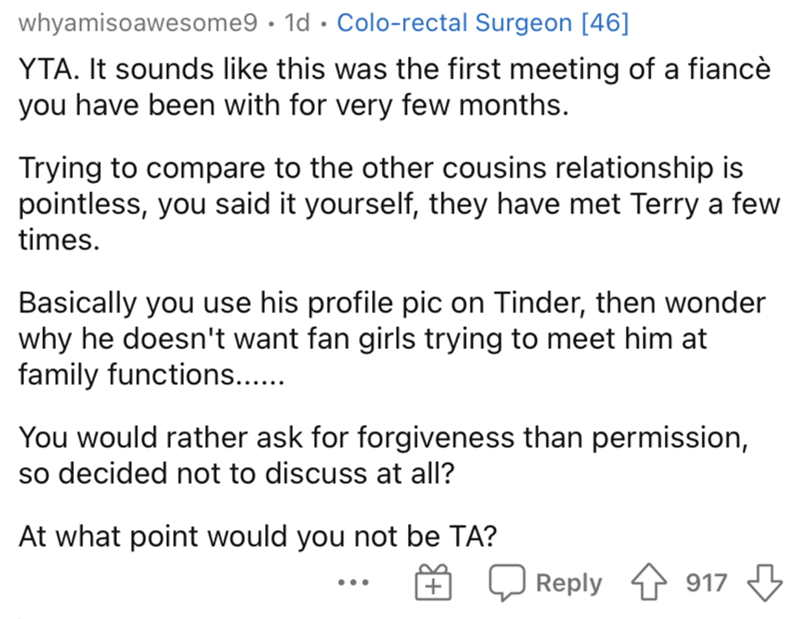 #13 I think most people understood what was going on at that point. 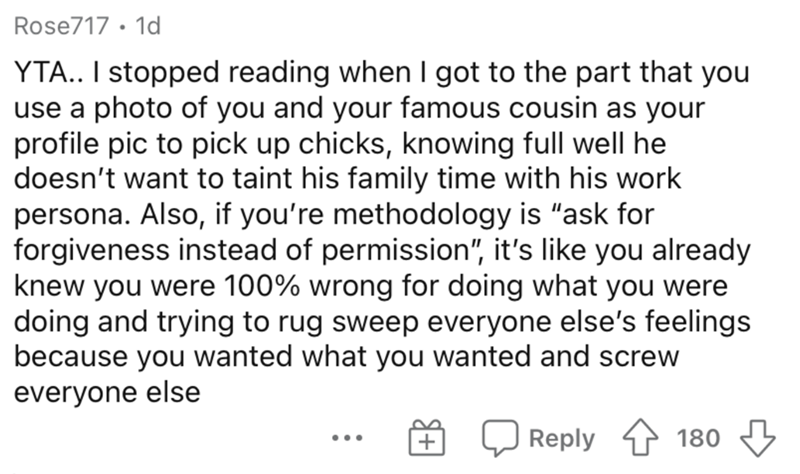 i was going to say that OP is probably the ENTIRE reason for Terry’s rule, seeing as he uses pictures with him to get dates and obviously those dates are going to want to meet terry and fangirl and shit and no one wants to deal with that at family gatherings. little did i know he doesn’t just bring around fangirls, he brings around scum looking to make a buck off his cousin and literally this is the entire fucking reason why he has the rule. it KINDA sucks of terry to allow one fiancé but not another but it’s HIS rule and he knew the cousin’s fiancé as an old family friend so he knew the guy was cool AND he didn’t even know OP was engaged!!!! so OP was mad his fiancé couldn’t come and another could, knowing that no one in the family knew of their status change. so honestly I’m gonna go with YTA for OP because Terry literally has these rules solely for OP and his bullshitery

#14 That lowercase a annoying just me? 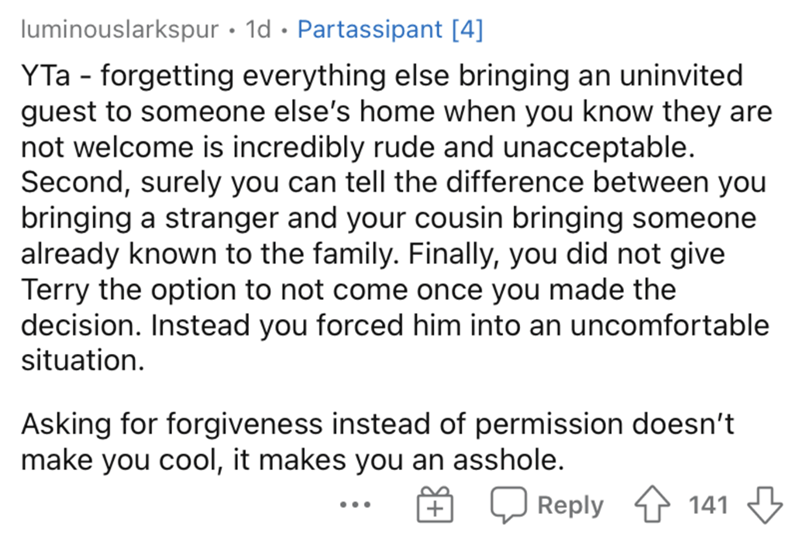 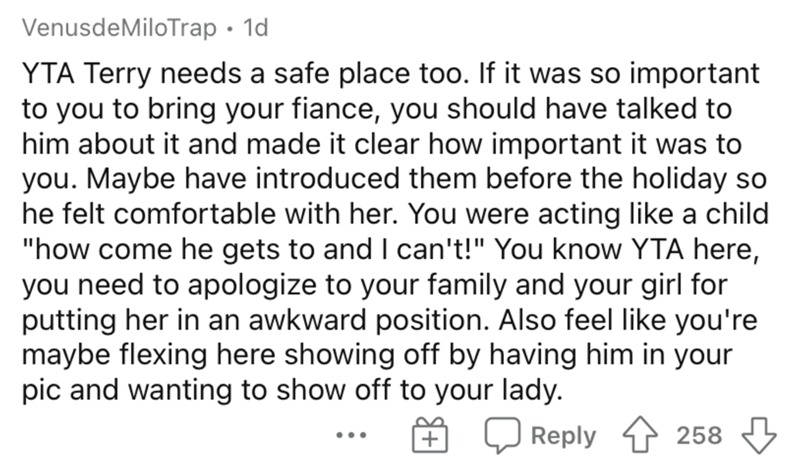 #16 You don’t ask for permission when you know they are gonna say no. 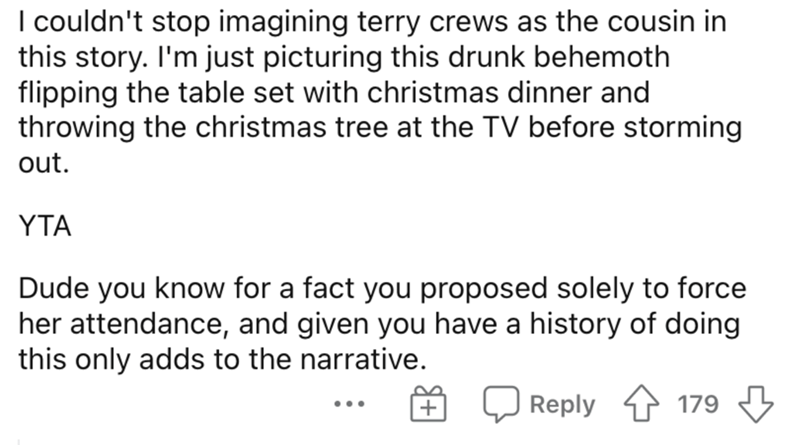 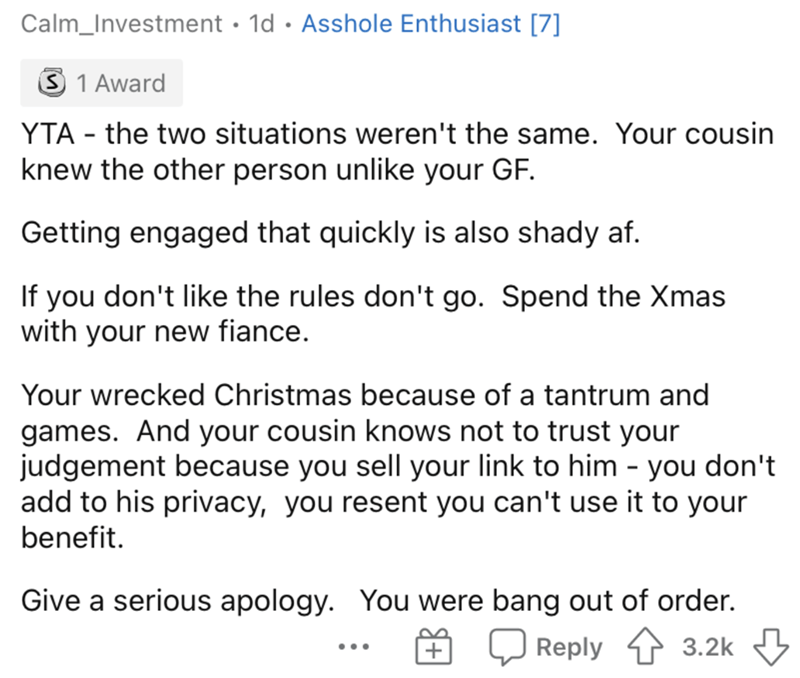 I think he proposed because he saw that Steve was allowed because he was engaged to one of the cousins. So he thought if he upgraded his insta girfriend who only asked a few times to met Terry and wouldn’t sell a story like his last fiance, to fiance status, people would accept her with open arms. Except he left out that Steve was known to Terry and on one knew he got engaged! Plus his shitty attitude about “seeking forgiveness rather than permission”. But obviously Terry is the asshole here because he didn’t even congratulate op on his new (this time for real) engagement. Lmao.

Sometimes I read these posts and wonder how people are so clueless to their own actions? Do they really think they can go through life doing what they please and expect everyone else to go along with them? Op’s post was bad enough but the information he added in comments just made it ten times worse. I’d be surprised if Terry ever trusted him enough to be invited to another family gathering.

Op is not just the asshole. He’s the problem. If Terry cut him out he could get drunk and relax in peace. 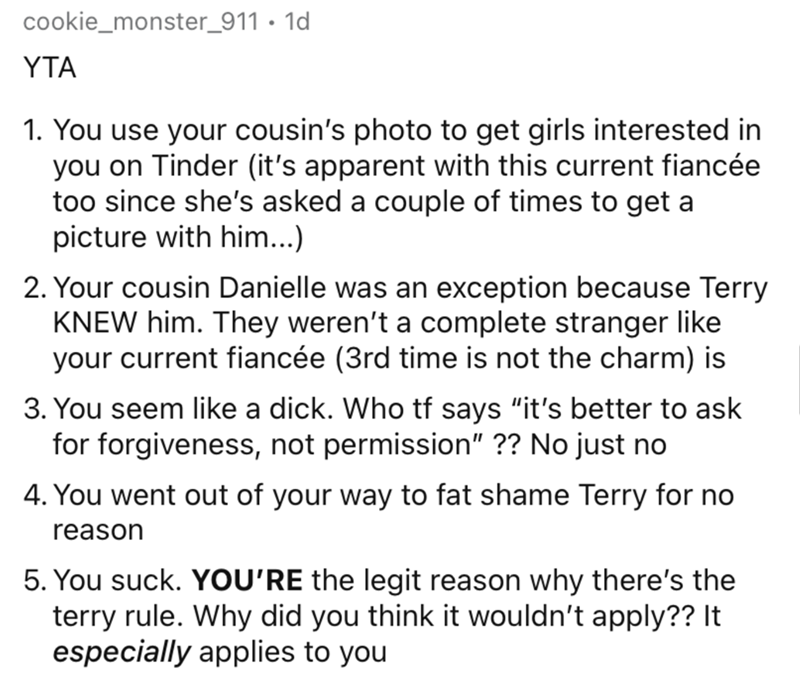 #20 He’s show to be more than just a little petty and jealous at this point. 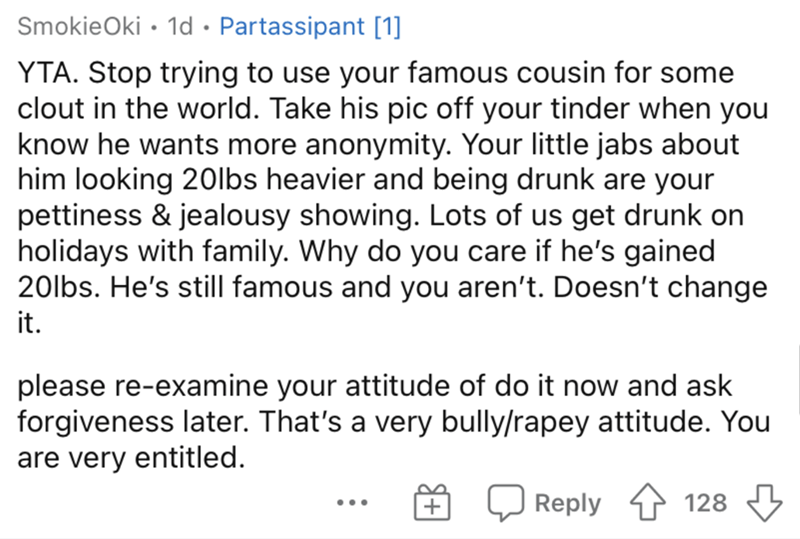 #21 Over some little drama.

#22 The rule exists because of you. 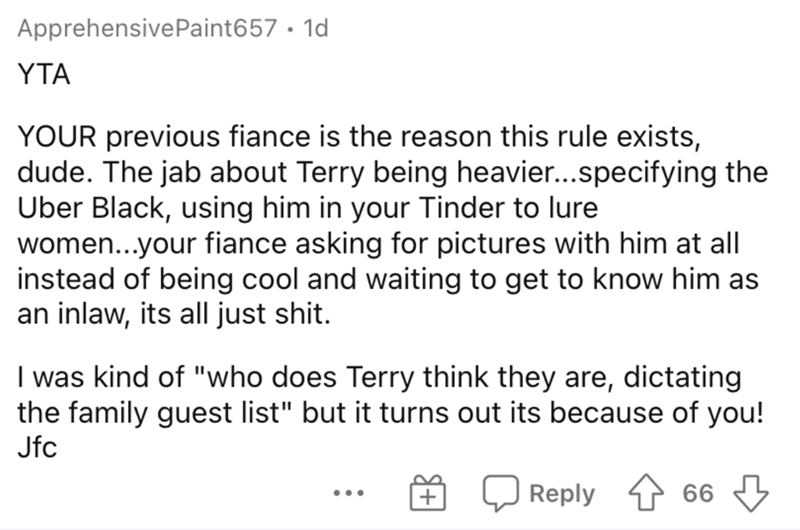 #23 Genuinely upset at this man. 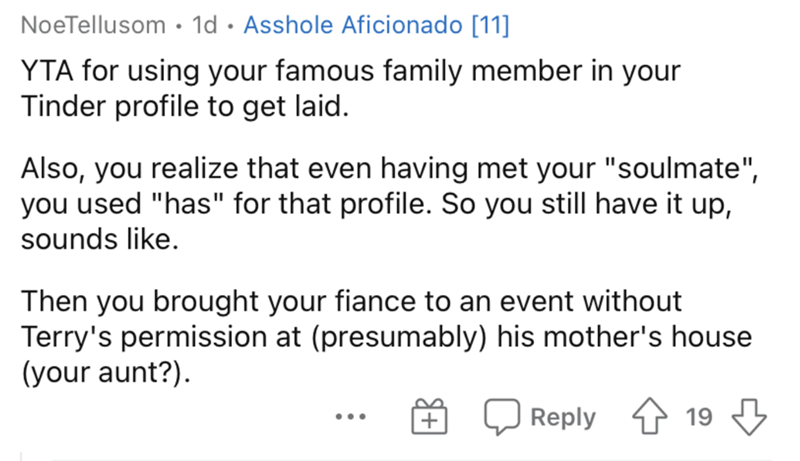 What do you think? How much of TA was OP or are you one of the few people who think he was not TA? Tell us in the comments!