Humans love to play with dogs.

Dogs are extremely adorable. I am a very strong believer in the fact that dogs possess supernatural powers and energies to attract humans. Be it any situation, if a human sees a dog they cannot resist petting them. I guess Peter Perigrinus was right, after all, opposite polls do attract. The relationship that forms between a dog and a human is very special. That is because both make an equal amount of effort. This is why an owner-dog relationship is always termed an inseparable bond.

The thing about dogs is that nothing about them is boring. Everything feels exciting and joyful when we are around dogs. All thanks to the internet dogs, we can now explore happy and fun stories about dogs 24/7. And a guy like me who loves dogs can read dog stories for days and not show any signs of tiredness. Who doesn’t love a heartwarming dog story?

Today we’ve got a wholesome story for you guys, about a canine who lives in the UK. Her name is Stevie Ticks and he recently made 4 new engineer friends who lived close to where Stevie resided. The 4 engineers weren’t allowed to have a pet on the property they were living on, according to the landlord’s terms. So they decided to contact the owners of Stevie, Chris, and Sarah,  to ask permission to come to play with Stevie for some time. They did get a response. And it was from Miss. Stevie Ticks herself.

Scroll down below to see how it all went.

Jack and his 3 Engineer mates wanted to spend some quality time with the one and only Stevie Ticks. 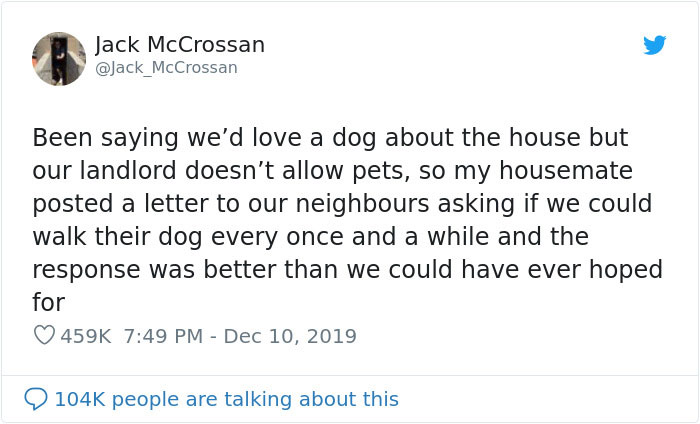 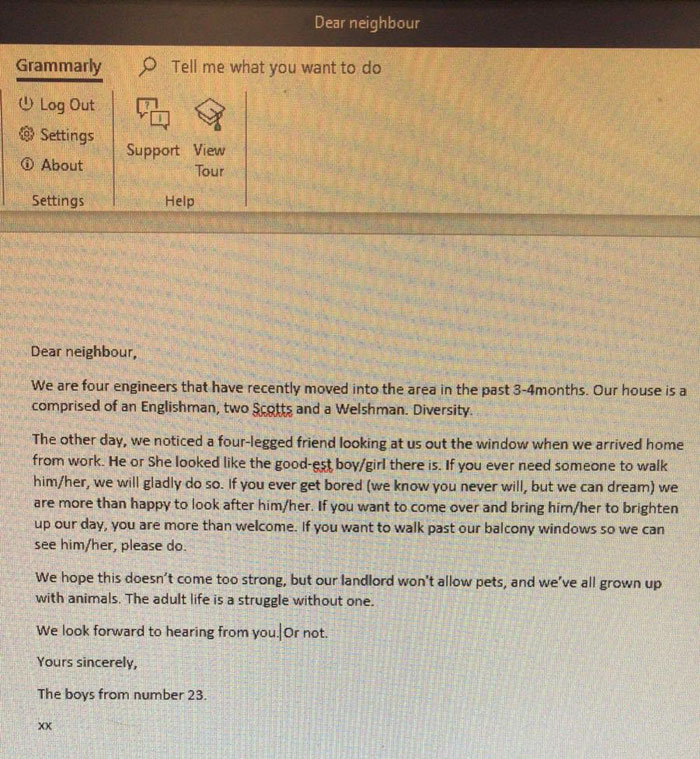 And soon enough ‘The boys’ received an unexpected response in the form of a letter from Stevie herself. 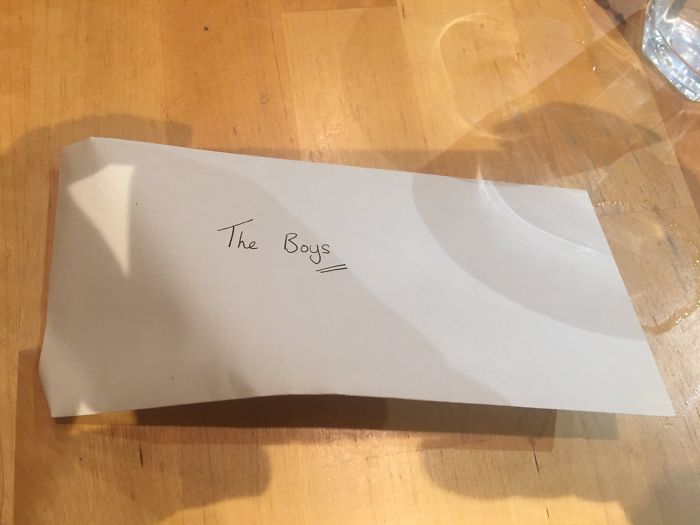 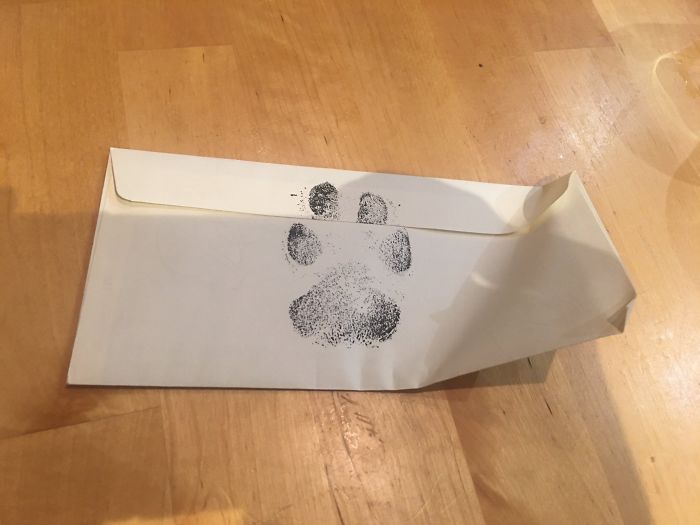 That paw print seal looks so adorable. Jack said, “We were ecstatic at the response and couldn’t wait to walk her, Once we saw the paw print on the envelope we knew it was good news!”

And she said yes! 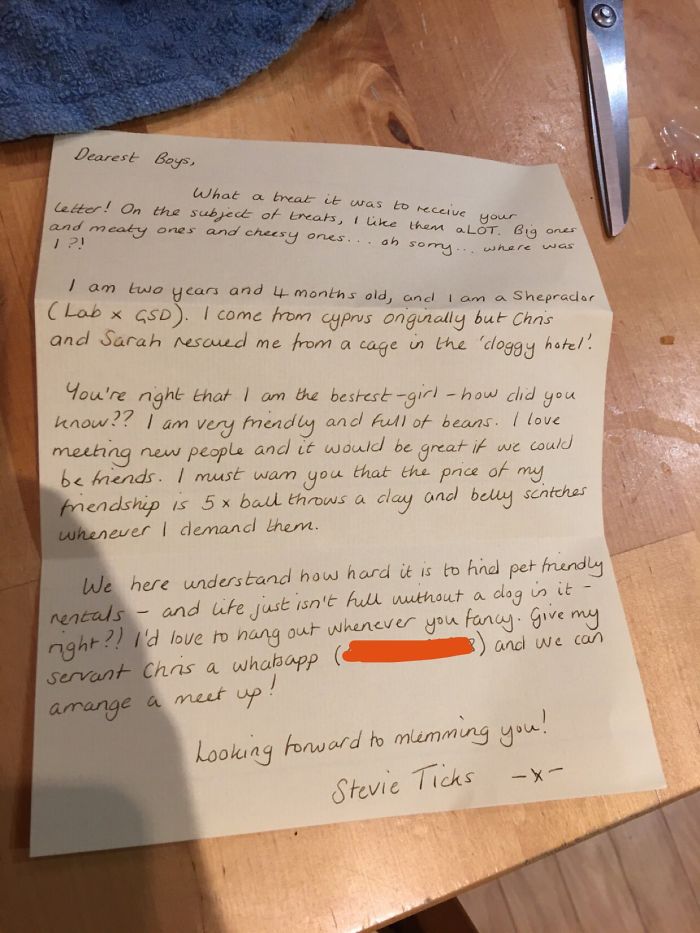 This is so cute. Lovely to see two neighbors interacting so peacefully and without arguments. A rare sight.

Stevie Ticks owners Chris and Sarah had an interview with the Bored Panda and the owners were happy to answer any questions. Here’s what Chris had to say about the whole situation:

“Stevie has met up with “the boys” twice now. One brief introduction and then she went to play at the local park together. More adventures in the future I’m sure! They got on so well. Stevie is super friendly all the time, and had always loved meeting new folks.”

Upon being asked about Stevie’s past and her habits, Chris said, “She’s a 2.5-year-old sheprador. Originally from Cyprus. She was hit by a car, had surgery, and was then flown to a shelter in the UK where she was swiftly rescued by me and Sarah. She loves playing tug, chasing birds, and licking feet,” I am so glad she found her forever home.

The boys were ecstatic to meet Stevie Ticks. 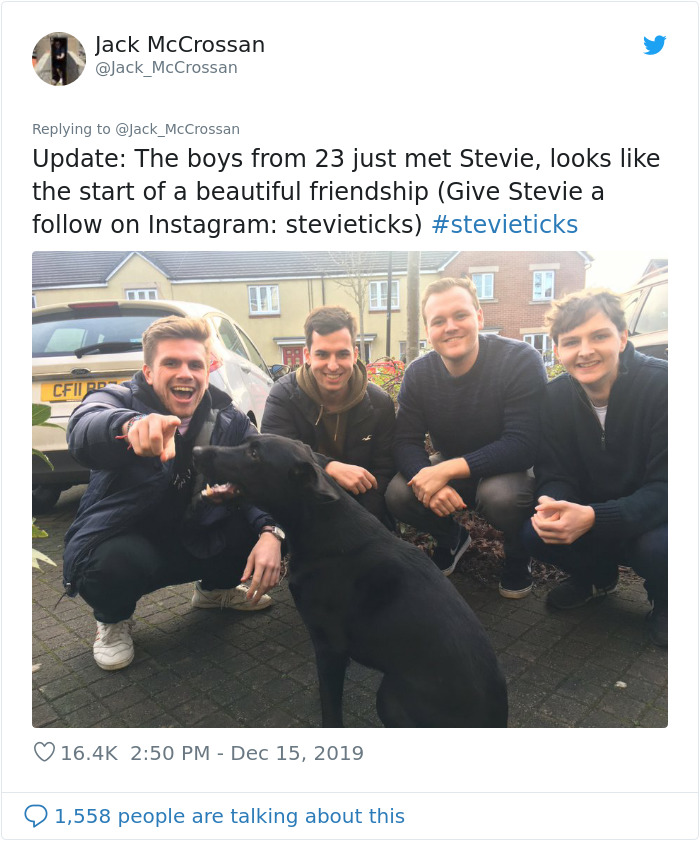 We hope the friendship sustains forever. Thanks to the boys shouting Stevie out, she has over 68,000 followers on Instagram. Lucky boys.

When asked about the importance of having a friendly neighborhood, Chris answered, “We appreciate how difficult it can be owning a dog whilst renting and feel that a positive, friendly and approachable local community is vital. We’ve been amazed at the positive response we’ve received from around the world. It’s inspired other people to make contact with their neighbors and share their dogs.”

“So if we can share the love a dog gives all the time we should try to follow in her footsteps.” 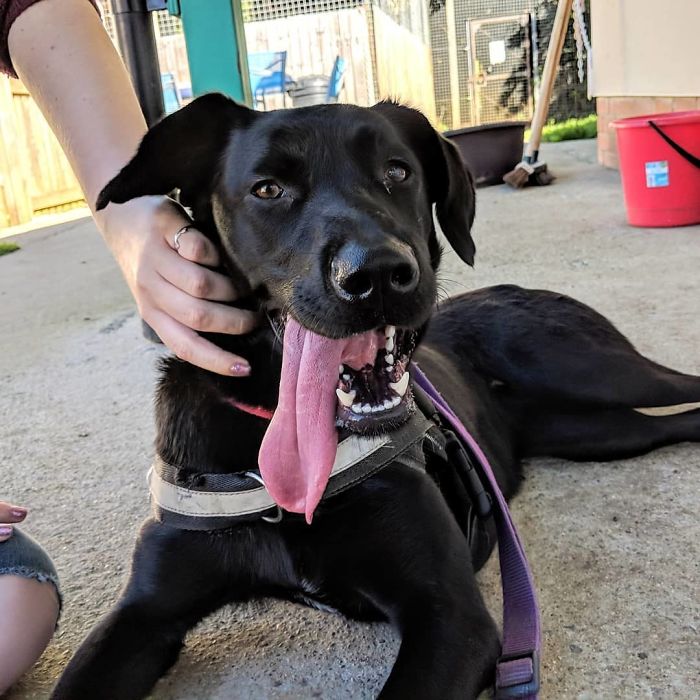 Sarah was asked about Stevie’s traits and here’s what she had to say about her pupper:

“Every time she goes out in the garden in the morning she ‘sings’ to the cats and birds out there. That was partly the inspiration behind her name, as well as the fact that she had tics all over her when we rescued her. Her favorite foods are wasabi, butternut squash, sweet potato, olives, fig rolls, sardines, and courgette cores (my mum is a courgettie spaghetti addict),” 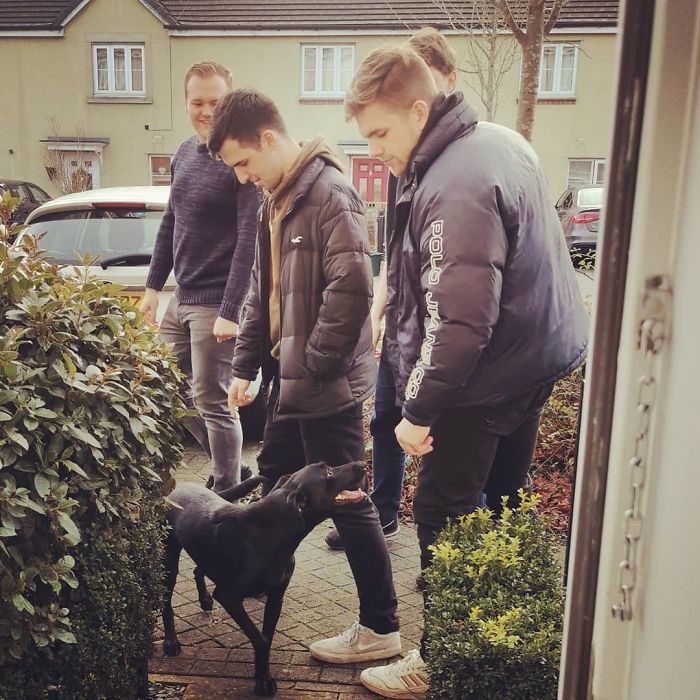 Sarah further added, “Stevie is a very inquisitive pooch. She loves hanging her head out the window and checking out all the people walking past that’s how she drew attention to the boys! She’s pretty uncoordinated and is likely to never grow into her paws so there are generally thwaps galore when playing, and she can’t catch anything at all (a ball or a treat!). She has no idea of personal space whatsoever.”

And for those who cannot meet Queen Stevie in person, she has an Instagram account where you can view her amazing pictures. 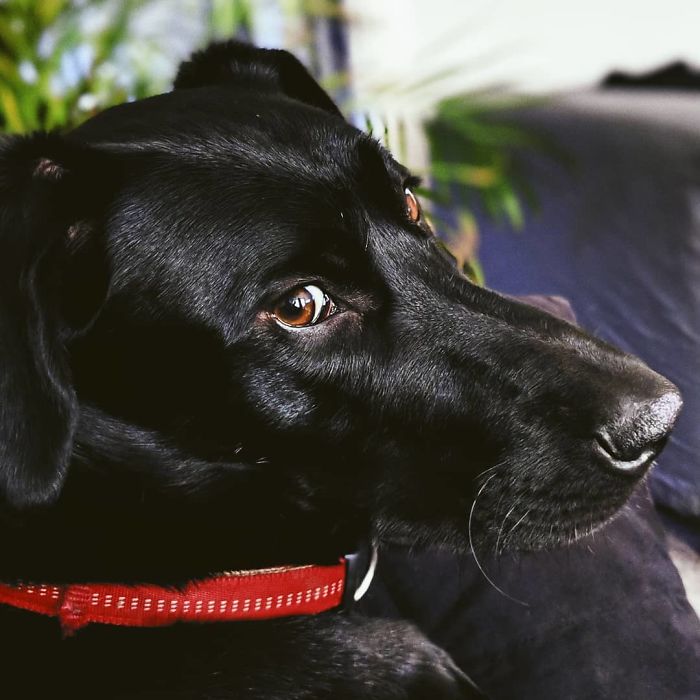 When asked about how they manage their time at work and with Stevie, Sarah responded, “[We] work shifts for the emergency services. When either of us returns from a night shift the first thing she does is hop onto the sofa and won’t move until you’ve given her at least 10 minutes of belly and ear scritches.” 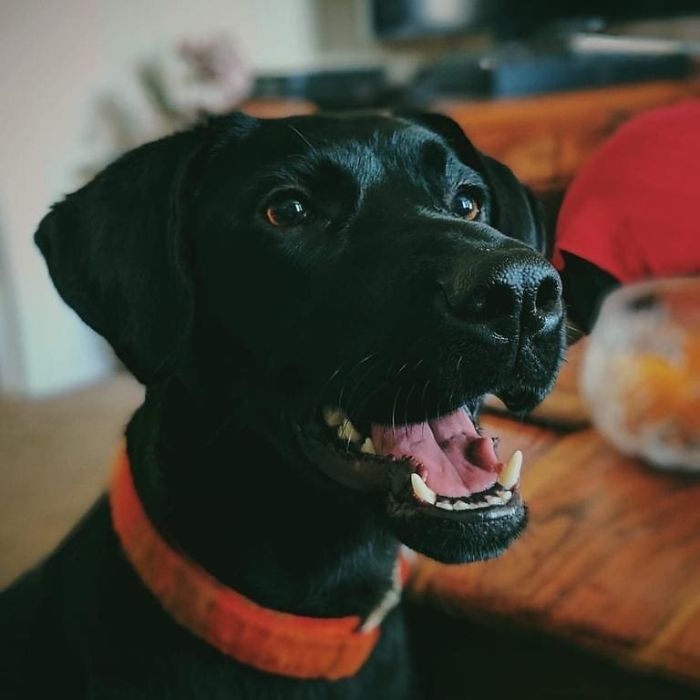 And here’s what Sarah revealed about Stevie’s dramatic self, “She doesn’t like her eyes being cleaned but gets very offended if you don’t let her sniff and eat her own eye boogers. She’s a huge drama queen and we once had to leave a cafe mid-meal and rush her to an emergency vet because she was yelping continually, to find out she had a scratch between her toe beans on her paws,” 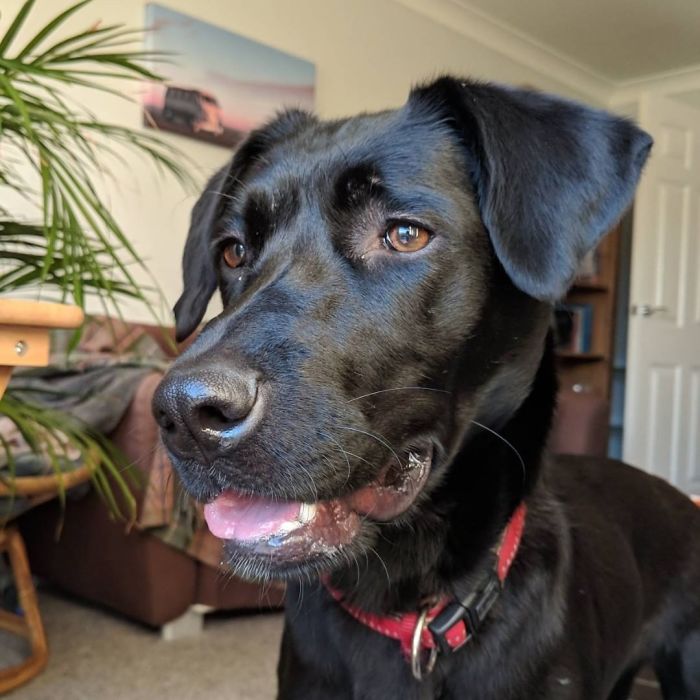 Here’s what Jack (one of the 4 engineers) had to say when Bored Panda asked him about his experience with Stevie Ticks:

“She is very energetic, puppy-like, and friendly! We got to take her for a walk and she wouldn’t stop running. We’ve all had a mixture of pets from cats and dogs to hamsters, fish, and guinea pigs.”

And when he was asked why he and his friends can’t keep a pet animal at home, he said, “It’s from our tenancy agreement because it’s in a student/young professional area it’s quite common. The part-time dog-sitting works well since we’re all at work all day anyway! A win-win situation.”

Landlords have no grudges against their residents. Here’s how they justify not allowing pets in the house:

The first and foremost justification is the factor of cleanliness. It is not an easy task looking after pet animals and not many are capable of doing the whole cleaning thing. And pets can cause furniture damage. Take the moody cats, for instance. They would rip apart your couch if you don’t give them food on time. So, the damage ultimately is done to the landlord’s property. Another reason that they give to justify their decision of not allowing pets at home is the factor of noise. Animals can be very loud. Ever heard. Take Golden Retrievers (a dog breed) for example. They have a Guinness World Record for the loudest bark. And that can cause disturbance in the neighborhood. You need to respect everyone’s opinion and the fact is, not everyone loves loud noises, especially after midnight.

To sum it up, landlords don’t allow residents to have pets because they don’t want to incur unnecessary costs and they don’t want any disturbance in the neighborhood that could potentially lose them a client. Fair enough if you ask me!

The Twitter audience loved the story and had a lot to say.

Right behind you, Kimberly!

‘Dog’ is just another name for ‘Love’.

That is so adorable. 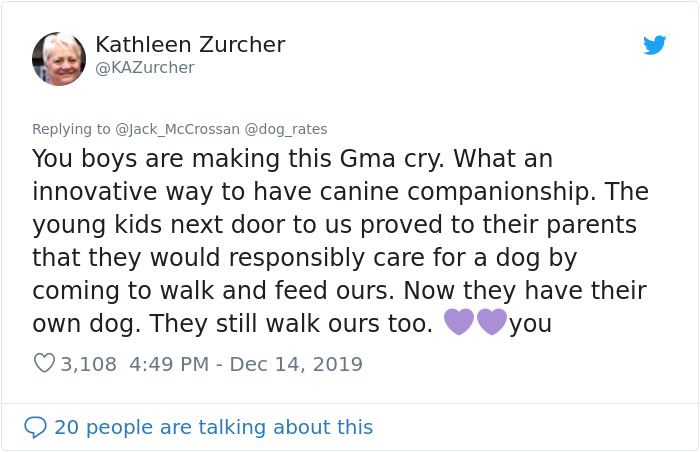 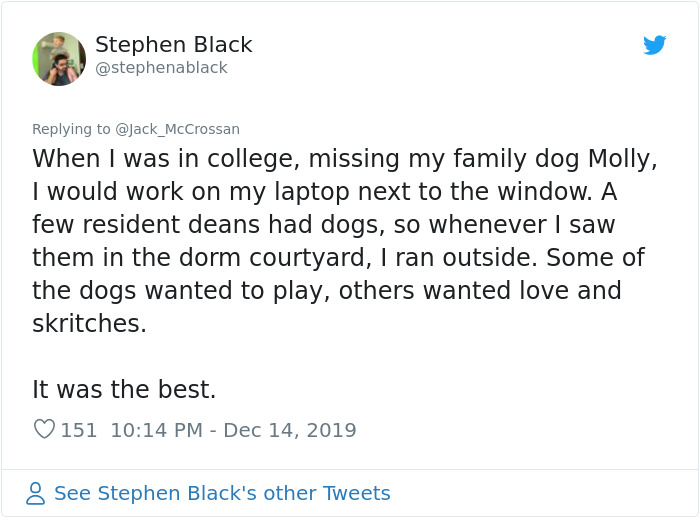 Let’s just say the internet was very happy that day.

I kid you not. I was head over heels for this story. So pure and heartwarming. This is how people should live. Happily, peacefully, looking out for each other. Times are tough and the environment is very dynamic. And stories like this one are what keeps us going so a big big thanks from us to Chris, Sarah, and Jack and his 3 mates.

We wish Stevie Ticks a great life ahead. I hope you guys enjoyed the story. Feel free to share how you guys felt, in the comments section down below. Dogs deserve nothing but love. Do you guys agree?