Here’s what happens to you when you refuse to take the blame for your own wrongdoings.

Anyone who has celebrated festivals and ceremonial events would know things don’t go as well as planned in the head every year. Take Thanksgiving for instance. I would straight up call you a liar if you say you have never dropped that delicious pie on the floor and ruined it or have never burnt that turkey a little too much for the liking. These things are tradition and are bound to happen. Sort of makes the whole festival tastes even yummier (not so sure about the food). As painful as these moments can be, the hilariousness hidden in there is what makes the whole thing totally worthwhile. After all, that’s what we all live for. This, by the way, was a scenario strictly associated with sensible people who realize the fun in this whole food mishap situation. Those who don’t come under this bracket are basically all the Karens this planet has thrown at us yet and will throw at us in the foreseeable future. The Karens would do anything but take the blame for their mistakes. Taking the blame is like sacrificing their egos and that, in no way whatsoever, can be done.

One of those extremely proud and entitled Karens is Sharon Wess. Not to lie to you guys, but Sharon is such a Karen name to have, don’t you think? Sharon had some lovely jovely plans for Thanksgiving as she got Marie Callender’s frozen pumpkin pie to celebrate the event. Unfortunately for her and fortunately for us, either she misread the instructions or decided to go full Karen on them, Sharon was supposed to bake the pie at 375 for approximately 80 minutes but ended up burning the whole thing. Maybe she put in the wrong settings to bake, who knows. An event that should have ended there and then, it didn’t. Karen or Sharon (they rhyme) decided to post the picture of the burnt Marie Callender’s pie on Facebook and fully shifted the blame on them for the unfortunate incident that made her Thanksgiving go a little booboo.

Let’s just say the internet receives it in a way Sharon didn’t expect and the Facebook community burnt her with a huge shower of jokes, laughter, and poky comments.

Scroll down below to see what happened!

Here’s a wild Karen blaming a frozen food company for her burnt pie. A pie that burnt from her own actions. 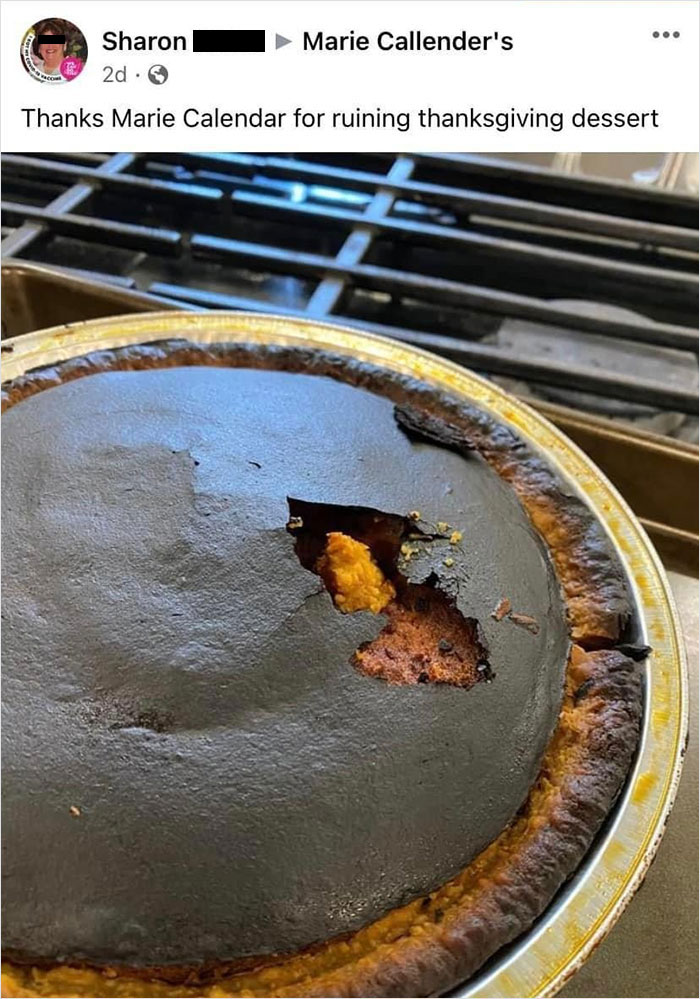 The stakes are always high when cooking at such special events and making a mistake is a pretty normal thing to do, even for the professionals but not taking the blame at all and putting it entirely on the manufacturer was sort of an unacceptable thing to do. For anyone, not just Karens.

Marie being the sweeties that they are responded ever so politely. 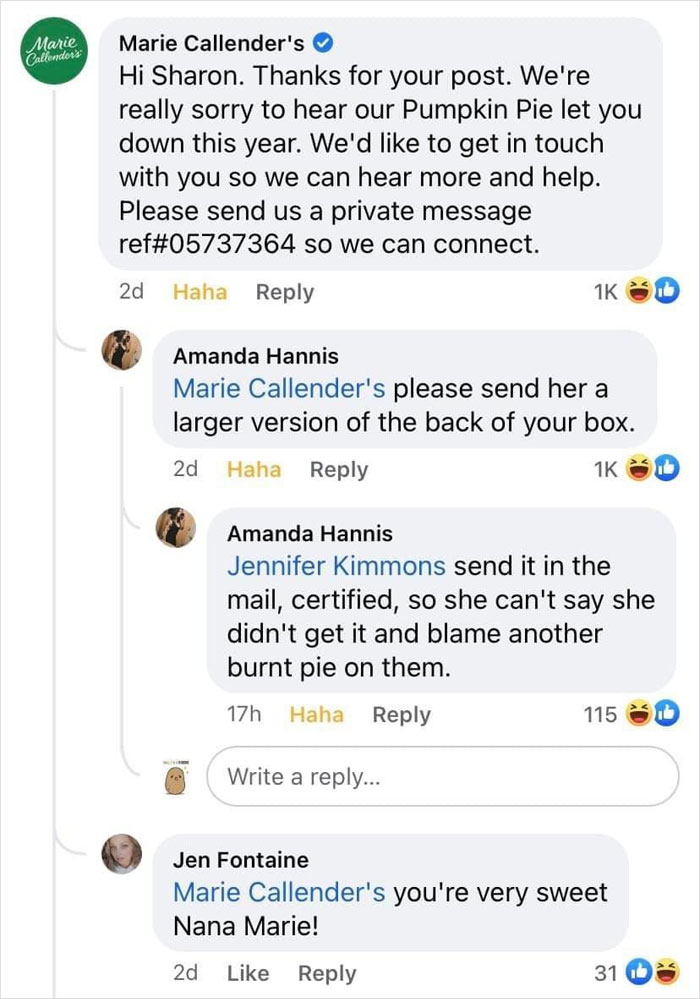 Marie actually tried their best to sort things out for Sharon. No one likes a ruined Thanksgiving. They are some real sweeties, to be honest. But the rest of the internet had some different plans. They were not having any of it and made sure Sharon got to know about it. Some people made fun of Sharon for being such a sore loser and not accepting her failure, under Marie Callender’s response. And the rest decided to join the party. According to a survey, 31% of Americans go for a pumpkin pie as a dessert on their Thanksgiving dinner. And when you burn it, you feel it.

Check these responses out:

1. The memes they posted were absolutely hilarious and classic! 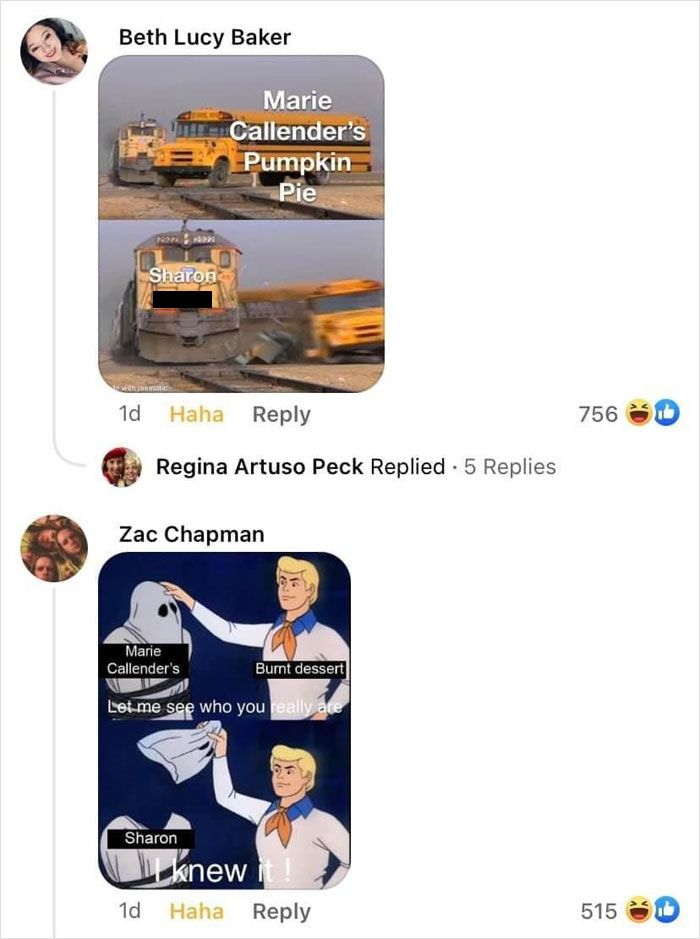 2. Some people weren’t having it at all and didn’t like Marie for being too polite to someone who was totally at fault.

3. This comment is the perfect example of “Kill them with kindness” 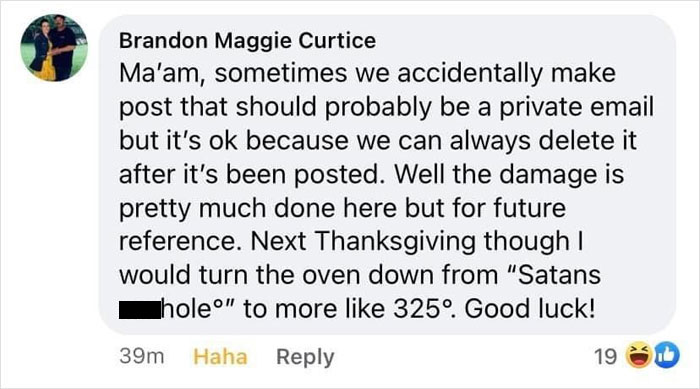 4. Four words to respond: Fire in the hole. 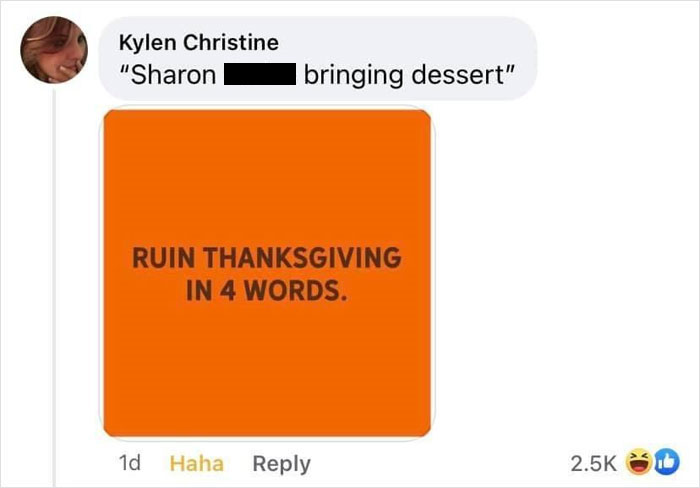 5. Hmm, doesn’t seem as hot yet, let me give it another 40 minutes or something. 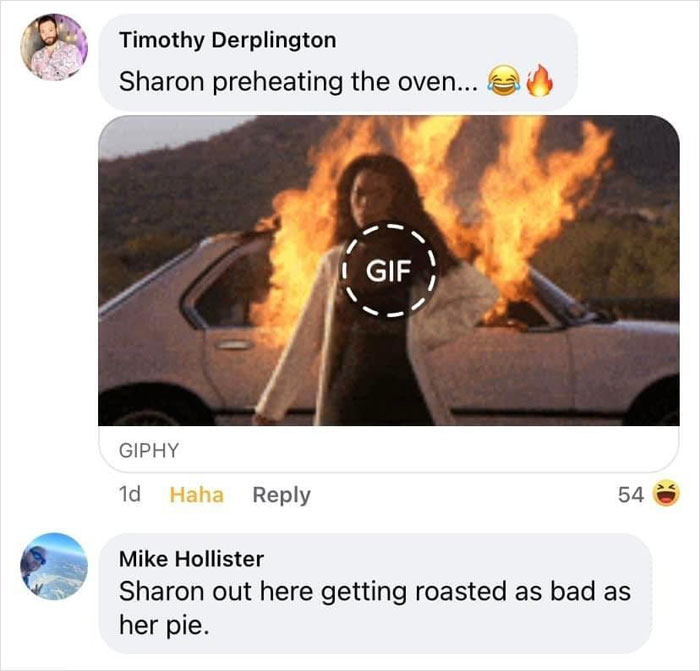 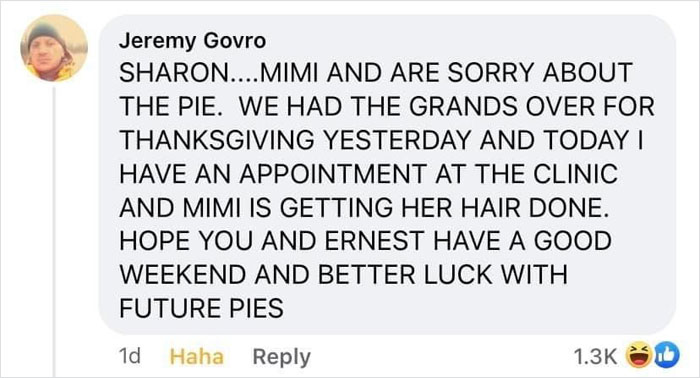 7. Tried to through our Nan under the bus. Unacceptabe! 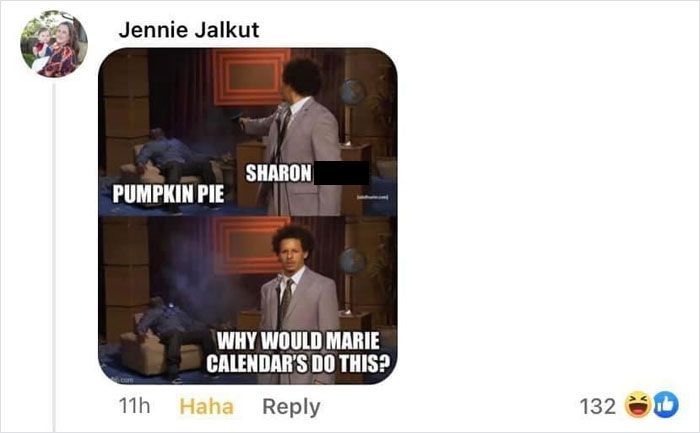 8. A very simple question that we all require the answer to. 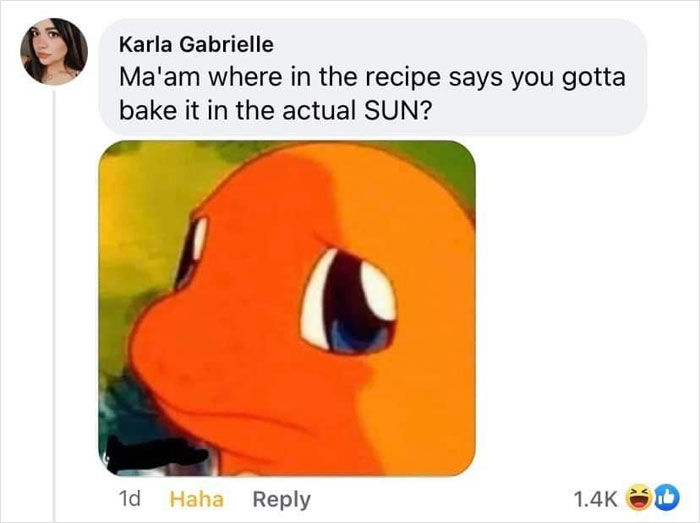 9. Just blame Marie for everything wrong that happens in your life. Apparently, that’s the only way to go about it. 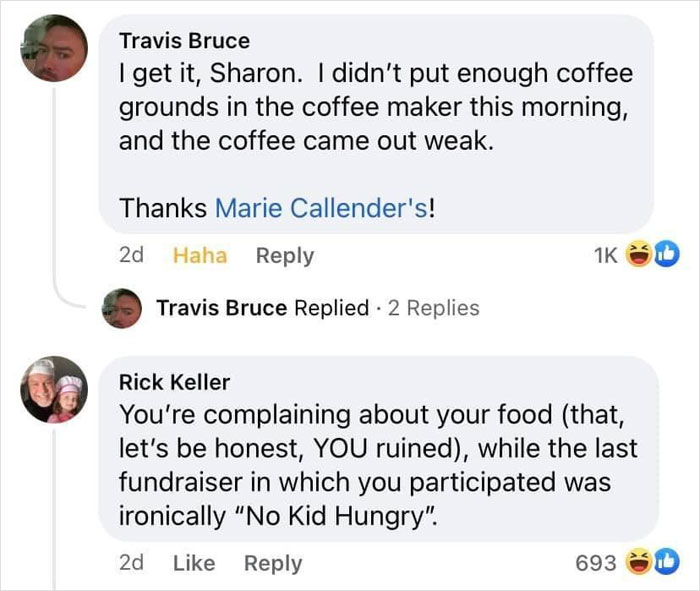 10. Everything is under control, guys. 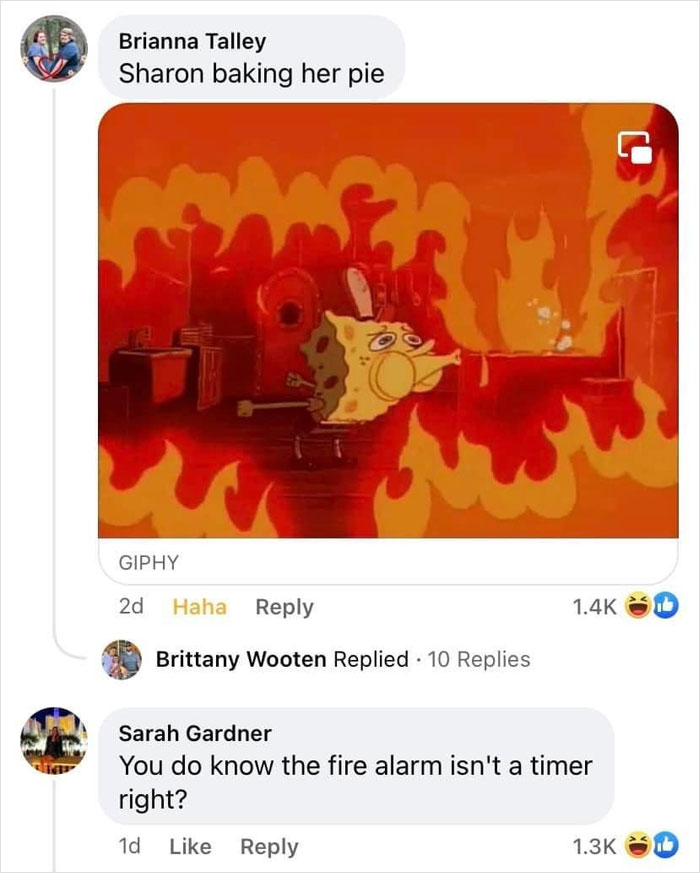 Apparently, Karen didn’t have a heads-up that a fire alarm is not a time alarm.

11. Perhaps Karen had a better, more superior task to interrupt her in the process. Who am I kidding? 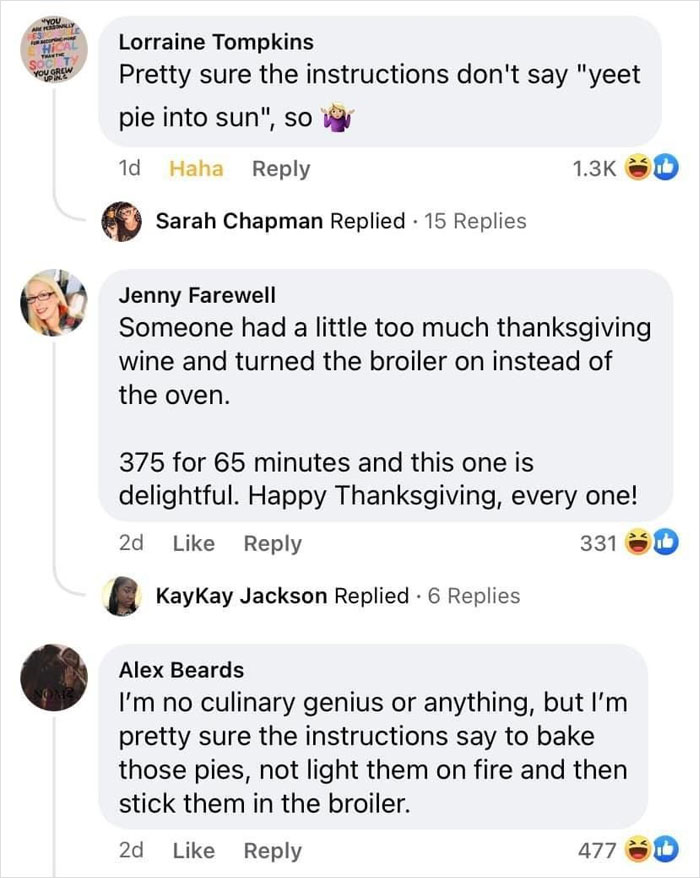 12. Duh! What’s the fun in life in taking personal responsibility?

Apparently, none because our Sharon here got roasted for not taking responsibility. 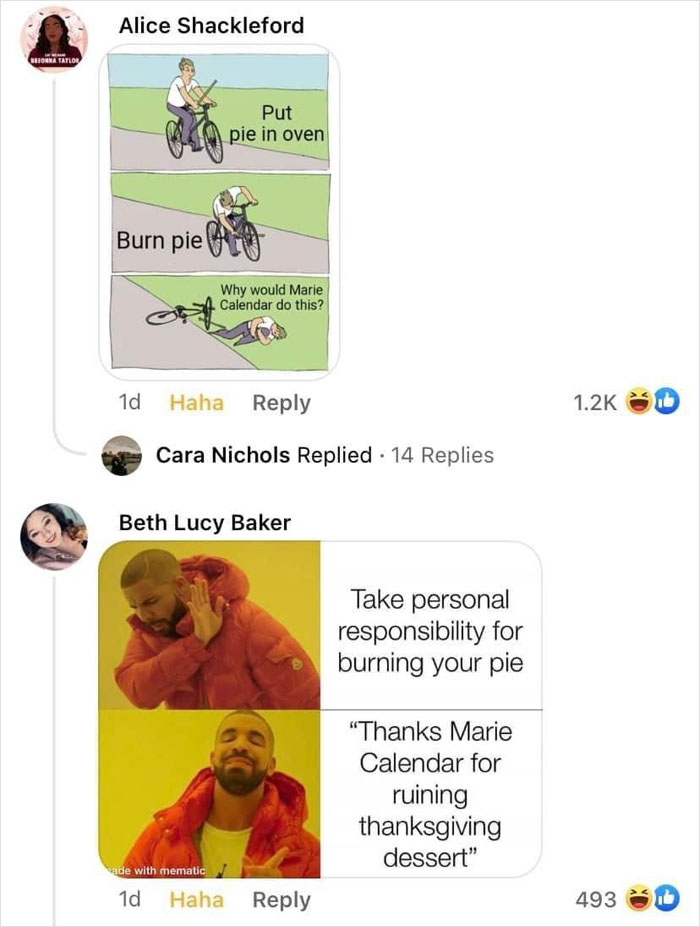 13. Ouch, there ain’t no going back when you try to attack Marie Callender. Sharon should’ve known. 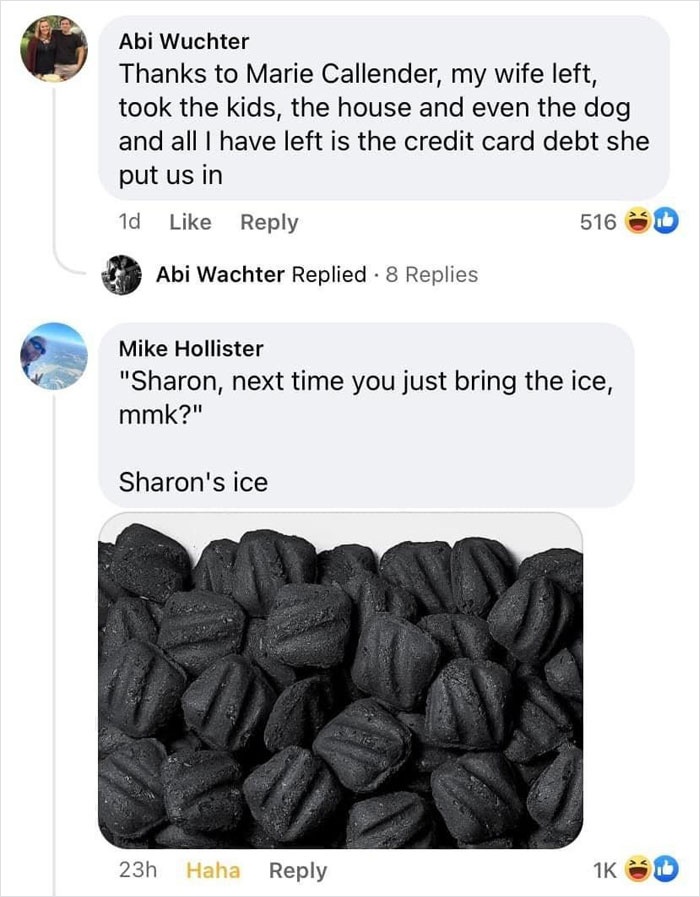 14. These simple one-line questions are the best ones. 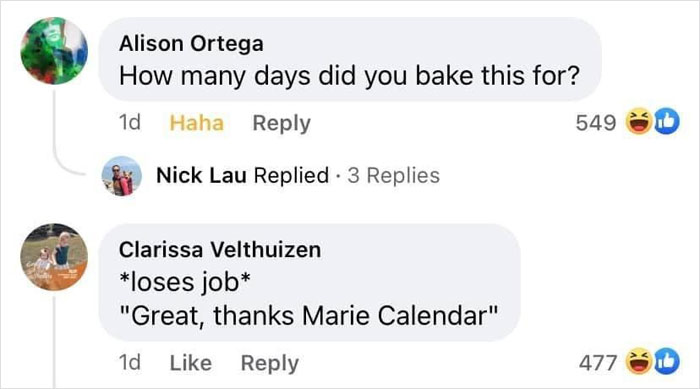 15. Even then the Karens will find a way to ruin things by saying the English was too difficult and then blame it on the language itself. 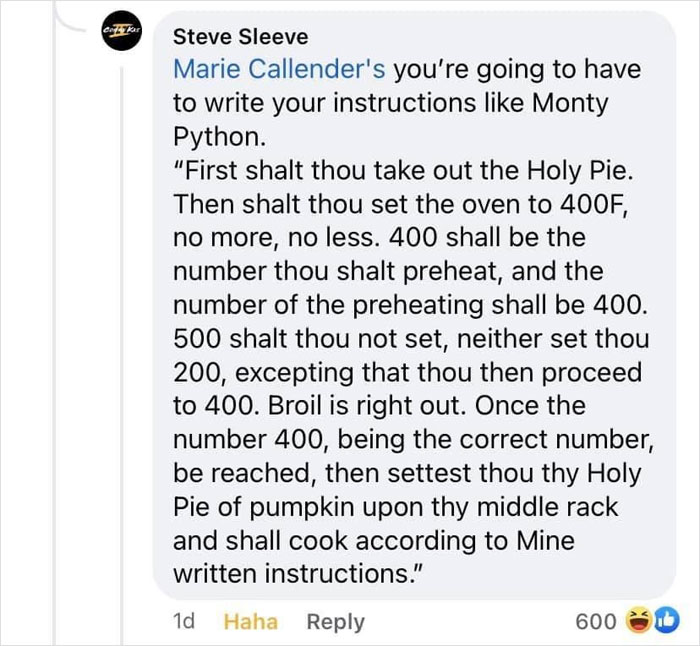 This is absolutely fantastic. Why on Earth would you want to blame a manufacturer for a pie you burnt. And the icing on the top is that Sharon made it a public post. See the rule about the public posts is that as soon as you press share, everyone on that platform is legally allowed to give their opinion on it, through reactions, shares, and comments. And voila! So it happened. You should be brave enough to take up the responsibility, laugh things off, and just enjoy life. Unless, of course, you are a Karen and you have got “enjoying life” totally wrong. Smarty pants gone wrong.

Let’s enjoy some more roasts. These one liners are even hilarious.

17. In hopes for a perfect pumpkin pie from God.

19. I swear that was the best comment I have ever read. So good!

20. In Sharon’s defense, that tiny F and C can often go unnoticed and cause life-threatening issues like this one.

21. Aha! The Sherlock Holmes of the world finally pooled in their thoughts.

22. Well, technically it is an alarm…but with some scary consequences.

23. Classic, Julie! I hope readers have a brain big enough to understand this one.

For those who didn’t get it, Julie is being sarcastic about Marie making the pie and burning it. How else would Sharon blame them?

24. Karens are mostly burnt throughout the year so you can’t really roast what’s already burnt.

What are your thoughts? Share them in the comments section down below.