Kitty deserved a good owner and a good life, his dream came true.

Adopting a stray animal has got to be the nicest gesture. Animals have feelings just like us and once they fall in love with a human, you can literally see their affection and care through their actions. Sure, it takes time to have a strong bond with their owners but it’s so worth it once you achieve it with your animal friend, They’re far more than just pets. They’re your children. They grow up with you, learn to adapt to your care and your habits and stay loyal to you no matter the cost. Most people assume that cats are selfish and only care for themself but that’s not true at all. It takes a lot of time for a cat to fully gain your trust but when it is achieved, a cat can make your everyday wonderful.

“I think I got adopted” 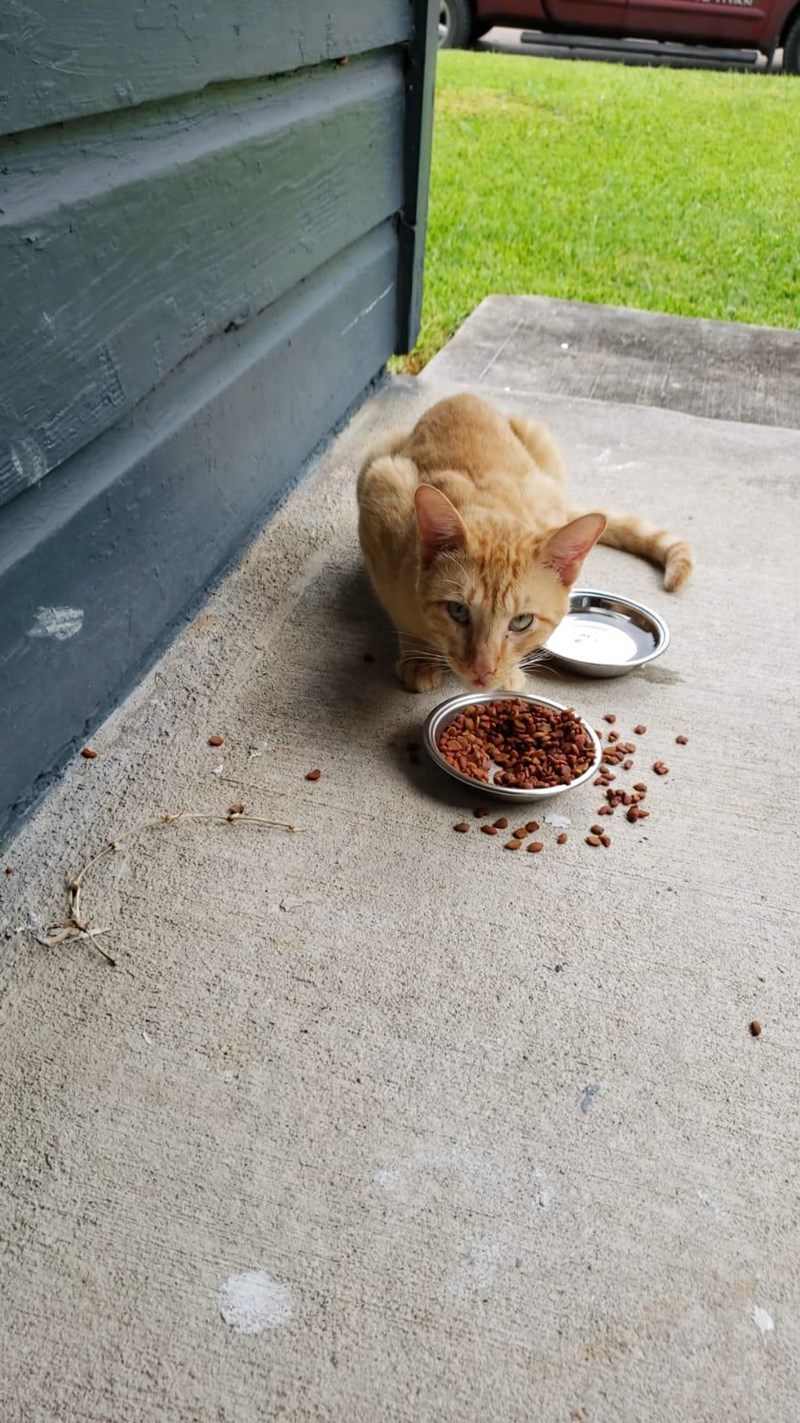 This person saw a cat starving outside where he lived and he ended up getting that cat some food and they both instantly clicked and his kind gesture ended up him adopting the little catto.

No human you cant leave me now. 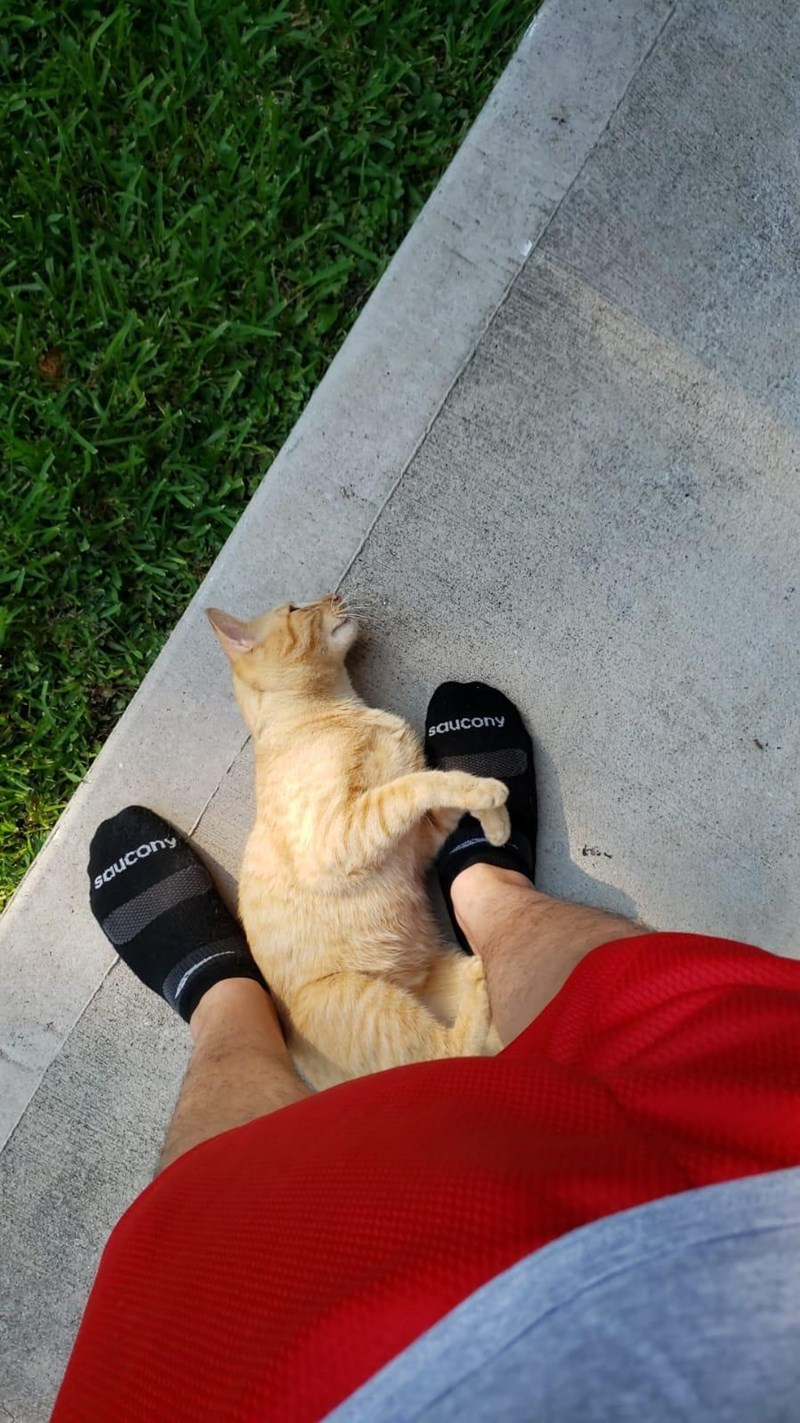 “Last week I found this cat under my car. He was extremely skinny and kept meowing at me to get my attention. After I came home from work I decided to give it a can of tuna since it was all I had to feed it. He was a bit apprehensive when I put it on my porch so I went back inside.” 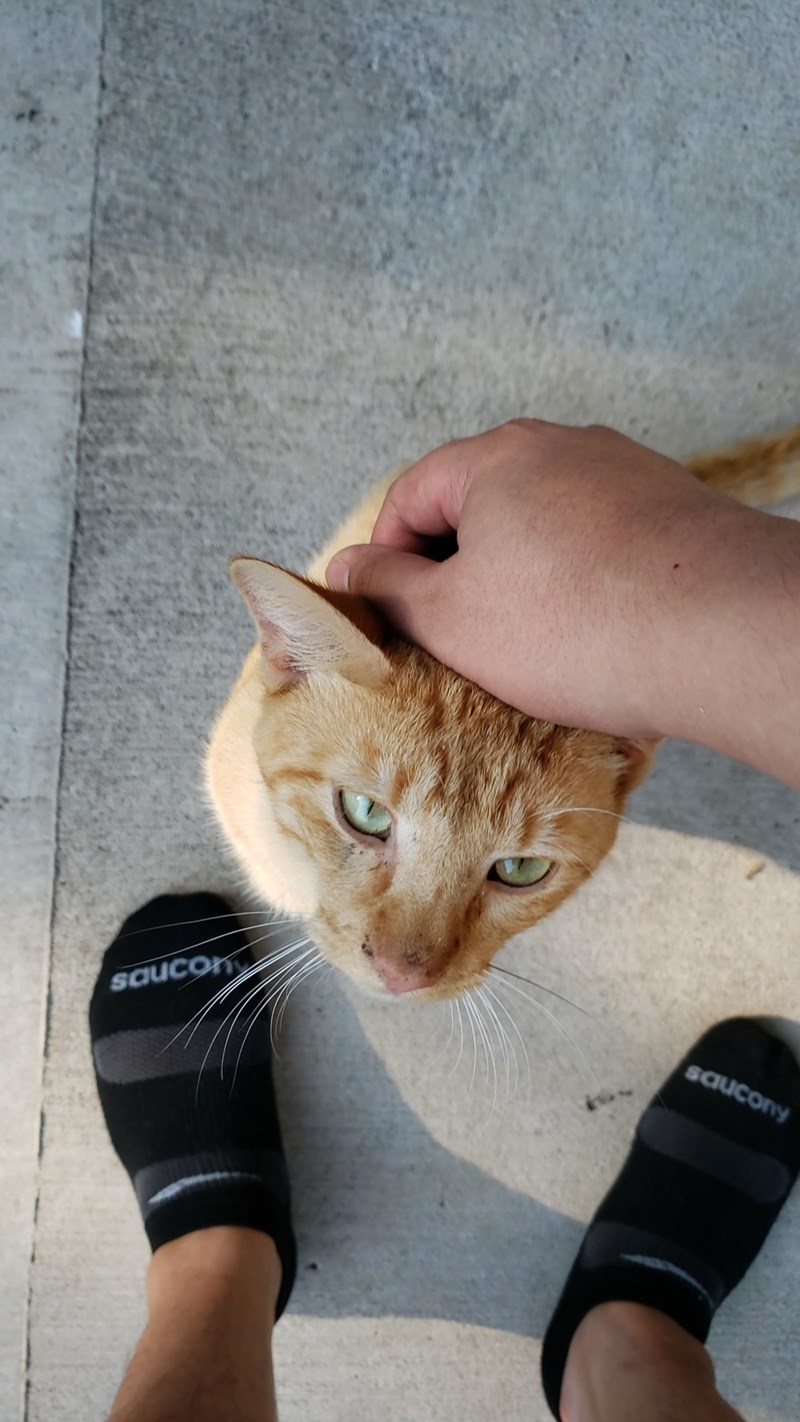 He kept on looking after the cat subtly and when he offered the poor stray kitty some food, he instantly devoured the can of tuna offered by this man.

“Of course, I crept on the cat through the window. After a few minutes, it came out from under the car and approached the can of tuna. I have never seen a cat eat a can of anything so fast. I noticed he was skinnier than I first thought and had a big cut behind his ear.”

When the little cat started greeting him on his return from work every day, the person went to a store and got that cat some treats and dry food.

“After a few days of approaching me when I got home from work and me giving it tuna I decided it probably needed proper cat food. So I went to the store and bought wet and dry food along with treats. I wasn’t sure what he wanted so I served him a bowl of broth and he ate both.” 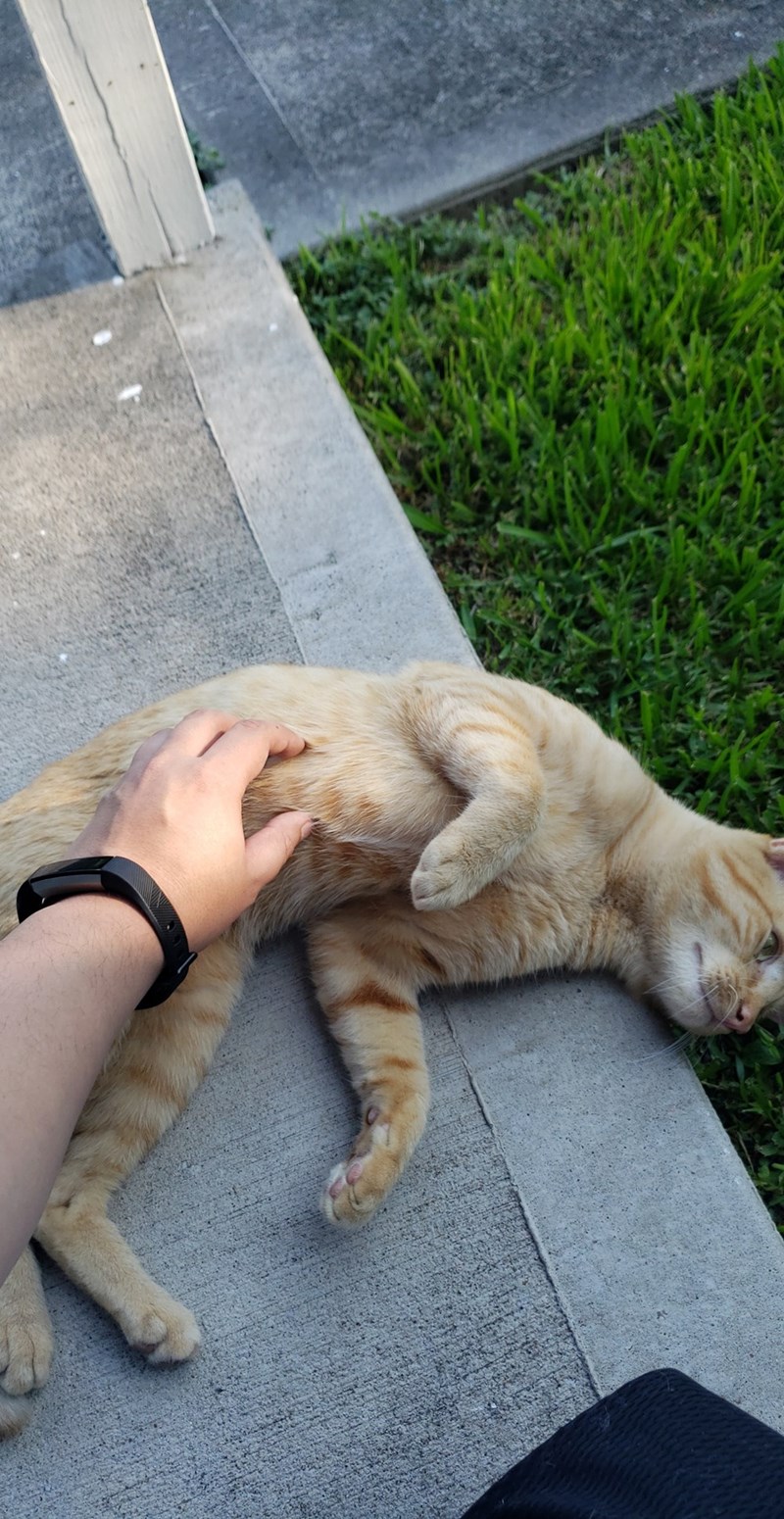 He started looking after the cat on regular basis and the cat only got better and better from there. 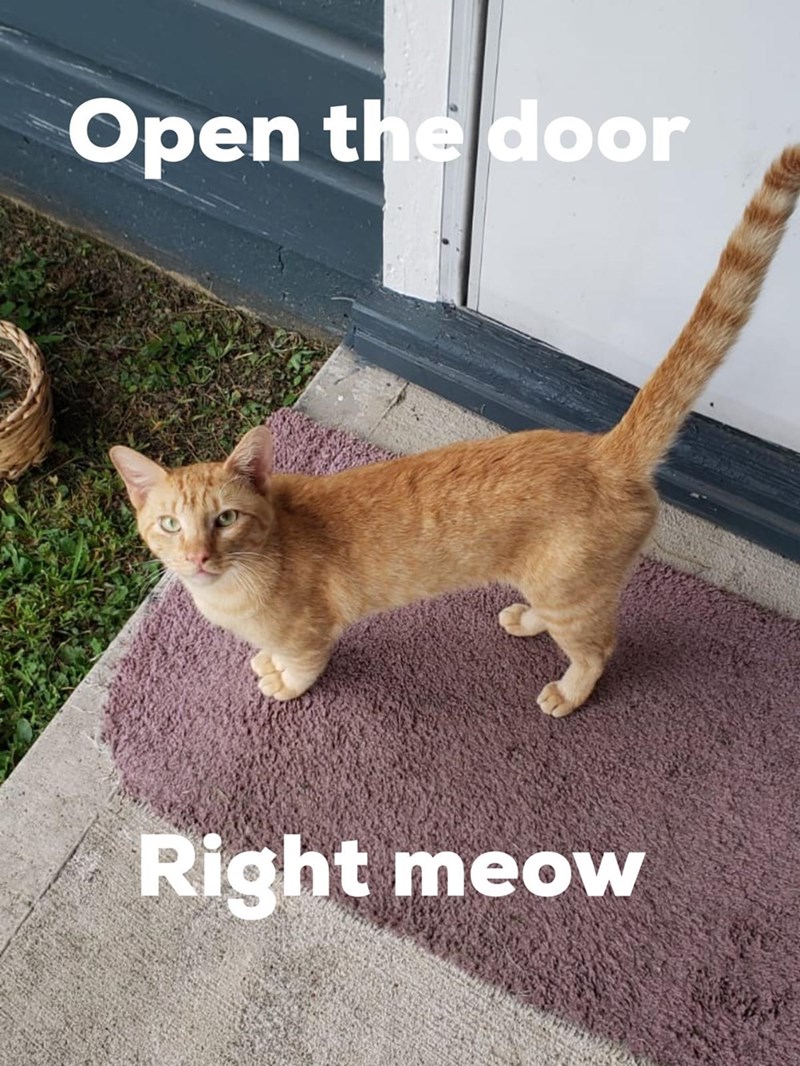 ”A week a later of having regular meals and it looks to me like he has already gained a little weight. If he keeps hanging around I plan on taking him to the vet and bringing him inside. I’ve never had a cat before and I’m not sure how this works but I think I just got adopted.”

“First night inside. He wasn’t feeling too well.”

Eventually, all that led up to him adopting the cat and we wish them both very happy life ahead. We hope they both find happiness and affection with one another and they were separate.

“Sleeping after seeing the vet” 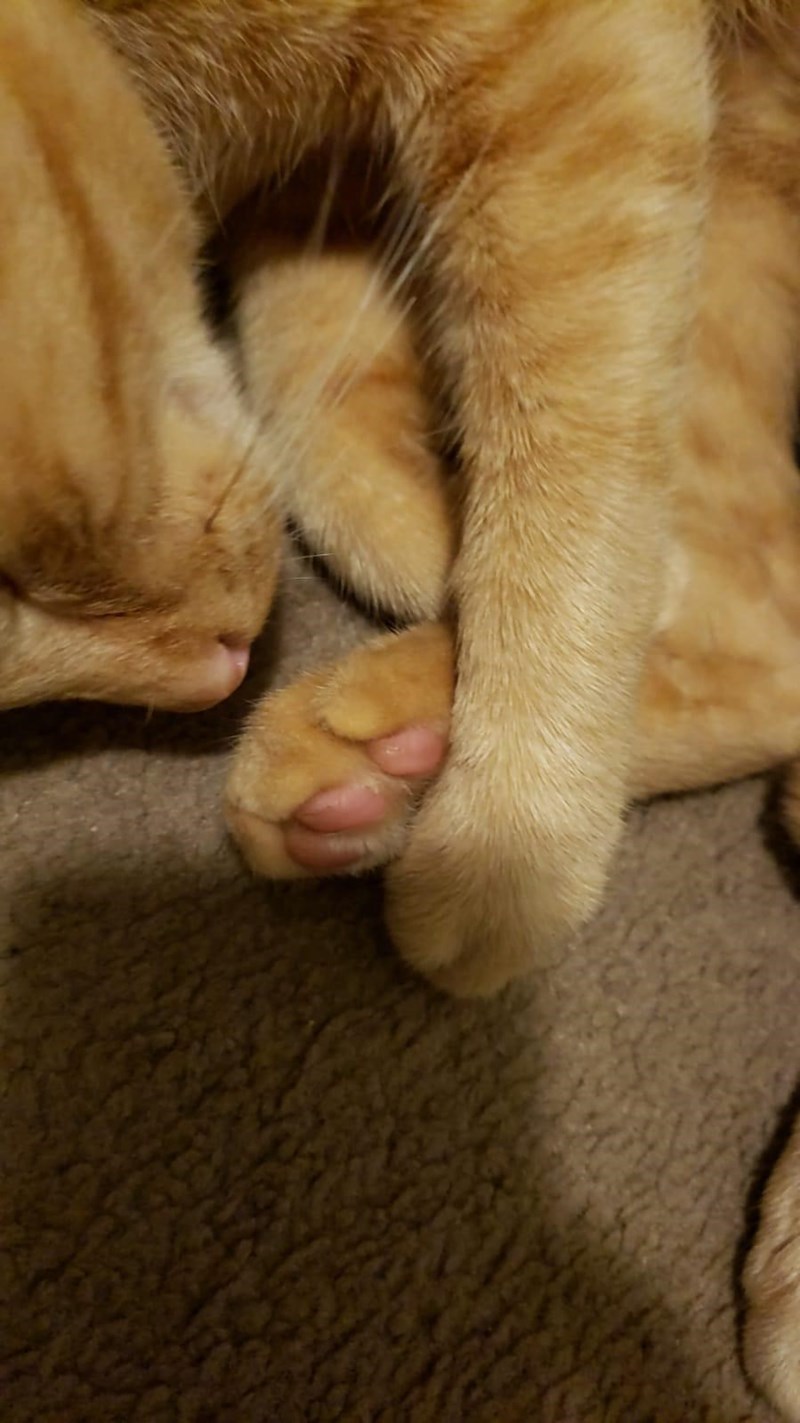 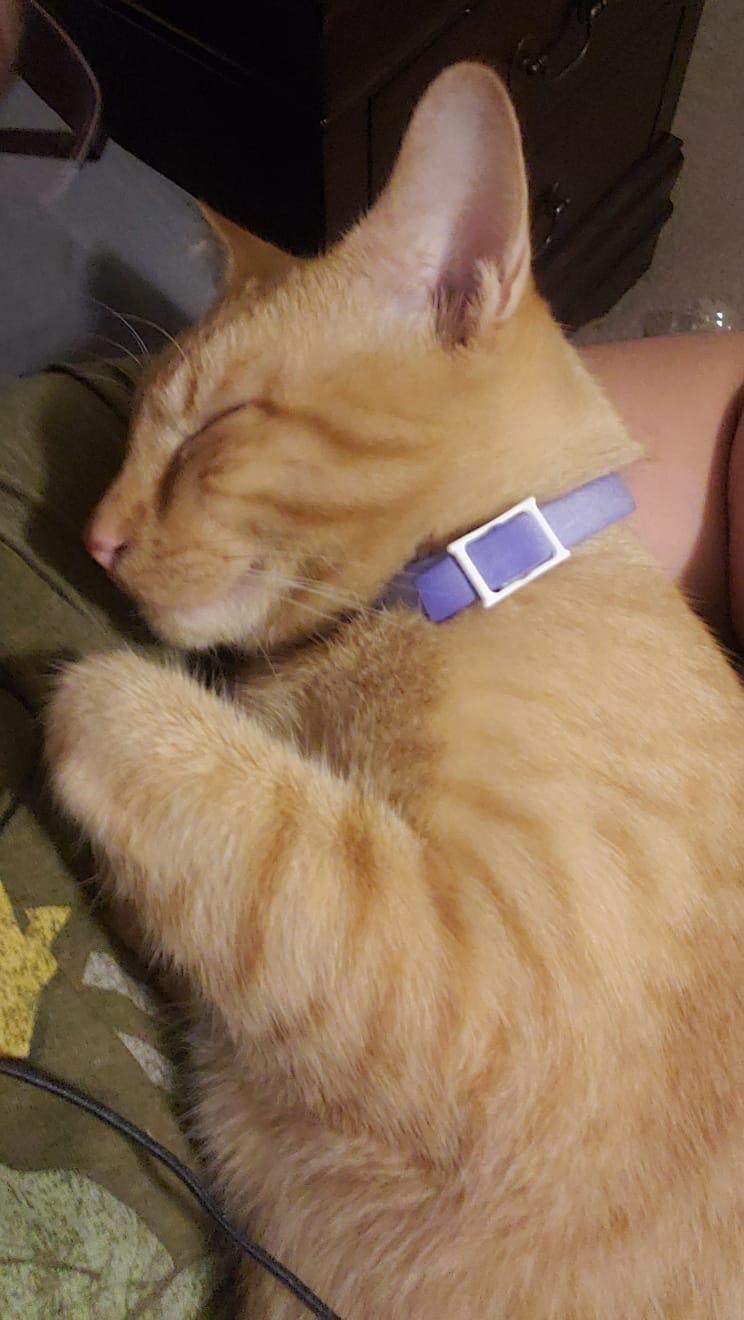 “Apparently, it wasn’t necessary because one night he kept meowing at my door. It was strange since it was not like him. I went outside to see what was going on and noticed he was favouring one side. As I went to rub his left side he yelled in pain when I got past his ribs. After a few seconds of deliberation, I headed to the nearest Walmart to get the things I needed (it was around 10 at night so my options were limited). As soon as I got home I brought him in.

“The bed is now his”

Yes because the kitty grew on the person and he accepted the human as his dad. 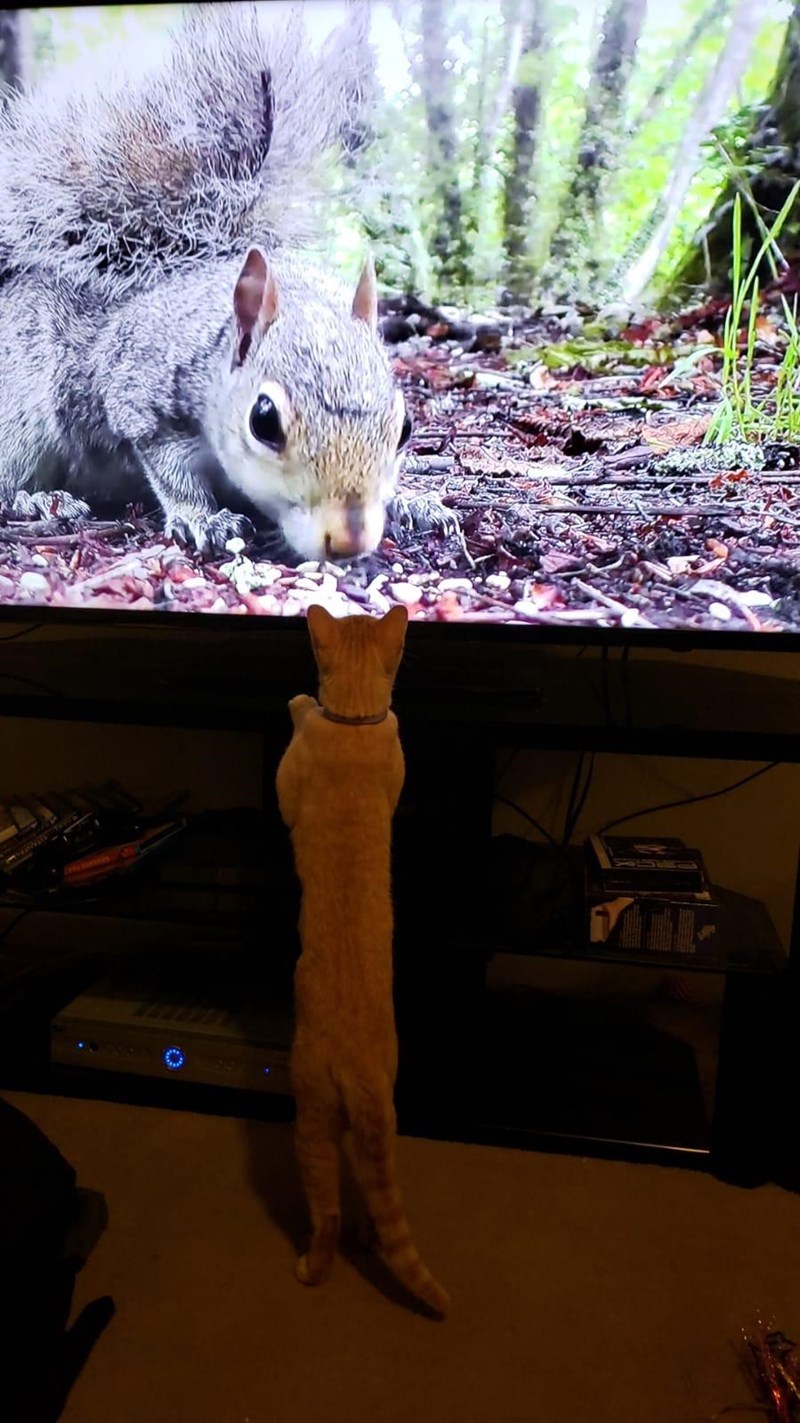 “As you can see from the second picture he made himself right at home. He didn’t leave my side the rest of the night.”

“Curious about the pineapple” 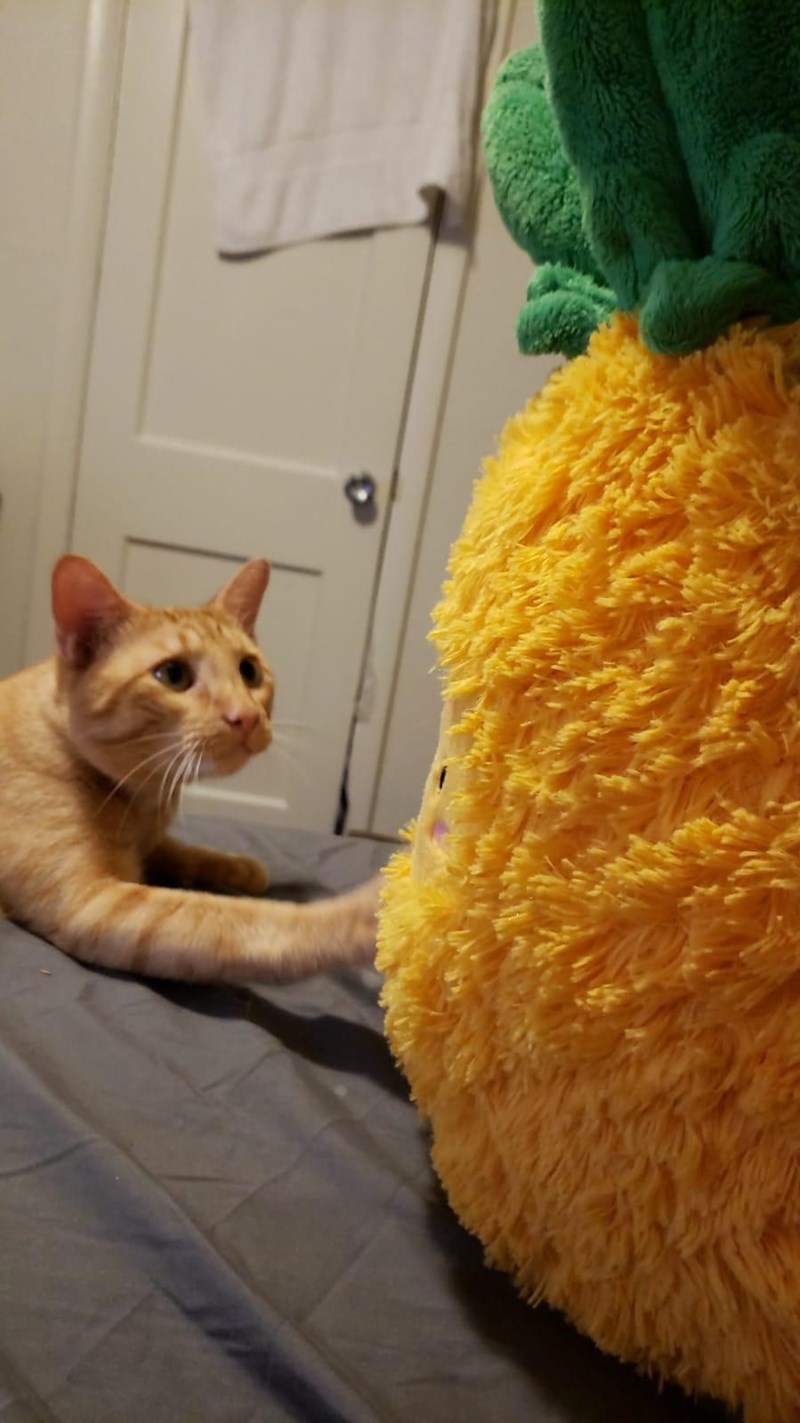 “The next day he went to the vet where I learned that he was around 10 months old and had surprisingly good teeth. The pain on his side was caused by an abscess that he got after a catfight he got into. The vet drained it and let the hole close up on its own. It took around two weeks for it to close.”

“The night stand is now his”

“As you can see now he is a cuddler and has slowly but surely made the house his. He follows me around everywhere and makes sure I’m not too far from him. He’s happy, healthy and honestly, that’s all that matters to me.”

You can literally see how happy and healthy this catto is now. What a beautiful transition. 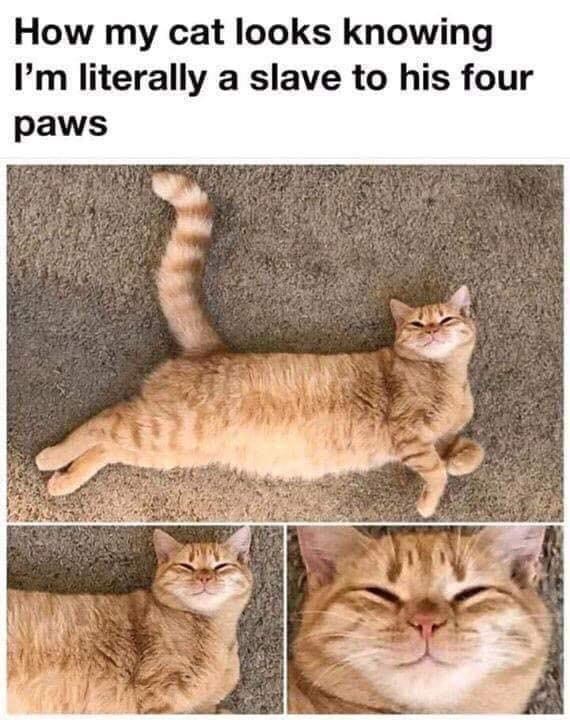 WIth that, we conclude this wholesome story. We’re glad this cat ended up with a beautiful person who looks after him like his own child, Let us know your thoughts on this story in the comment section below.