As we step into 2022, people have already started to whine about the new dramas that they had to face during the holidays. It’s unfortunate that we still have to witness “pet dramas” this year as well, just like any other year. The reason we are here to have a look at this story is to raise awareness about how you should consider a few basic ethics before traveling with your pets to someone’s place. If you have been invited to someone’s place, you must ensure that the host is aware and comfortable with you bringing your pets along to avoid any awkward or unfortunate encounters.

A person posted on Reddit’s AITA forum how he had to turn away his friend who flew in for Christmas because he simply didn’t inform the OP that he would be bringing his dogs along and that’s certainly against the ethics. So, he went on and shared the unfortunate incident with people in order to find out whether he was the a-hole in this regard or not. Let’s go ahead and see what happened;

1. Well, the guy didn’t know that his friend is going to bring his dogs along with him. 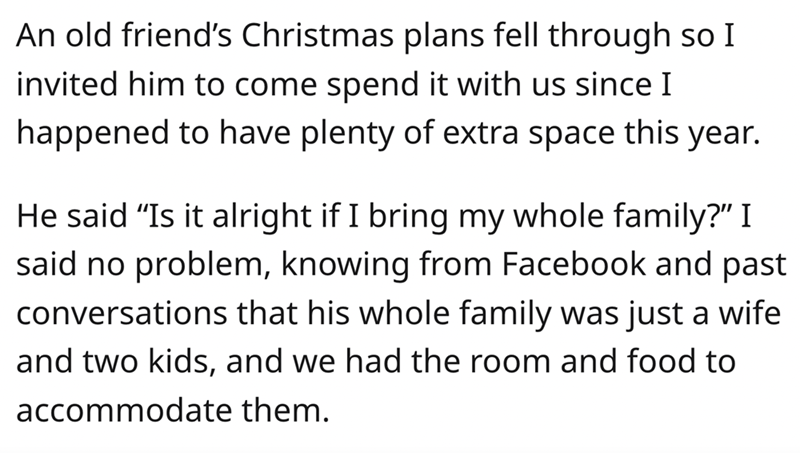 2. How can you just assume that he would know about your dogs?

Whenever you are traveling with your pets, you should always ASK the host if you can bring them along.

3. We can completely understand. Had it been a matter of a few hours, it would have been fine to some extent. 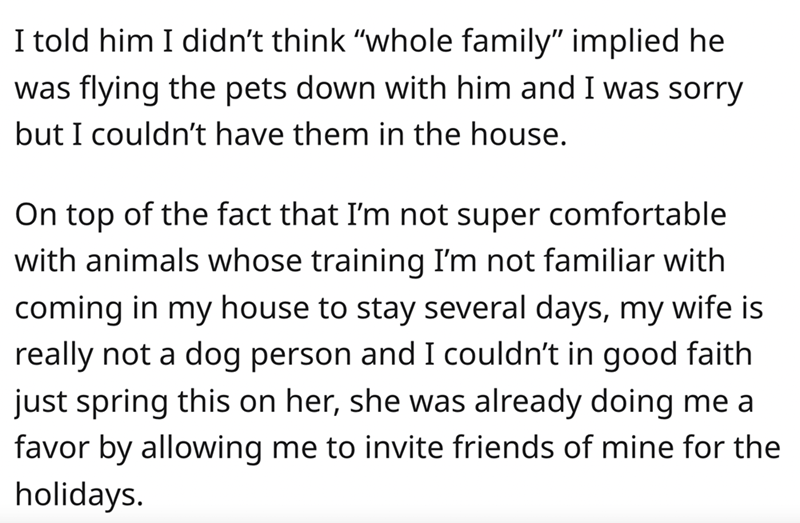 But however, that’s still against basic ethics.

And that’s so inconsiderate of those people!

5. No, you are not wrong at all for doing this!

As soon as he posted his story, comments started to pour in, and just as we expected, everyone was in favor of what he did. Let’s go ahead and take a look what people had to say about it.

7. Yes, you can’t just assume that the other person would be comfortable with your pets.

9. This lady summed it all up perfectly.

10. That’s one hilarious way to see it but so accurate.

11. It was definitely a trap that OP didn’t fall for.

And that’s how it went down. At first, you might have thought that it’s pretty rude to turn someone away just because they are bringing their pets along, that too on the day of Christmas, BUT this is exactly how it should have been handled. People have forgotten basic ethics and how they need to behave before going over to someone’s place. It’s not polite to just assume that the host would be comfortable with anything they do. There are many factors that one must consider before going to someone’s place even if it’s a very close friend or a family member.

Anyways, don’t think we’d be getting short of new dramas this year as well, right? Let us know what did you think. Feel free to use the comments section below!