Working under orally corrupt bosses is one of the worst lemons you could get.

Life is not easy these days. We are surrounded by thousands of troubles, yet somehow we manage to get through the day only o be bashed by the same rough routine over and over again. You could say humans have now adapted themselves to the unfairness of this planet. We feel sorry for all of us. But there is a sector of humans that we would like to pay our deepest condolences to. That sector is a compilation of those who, unfortunately, have to work under an extremely unfair, stubborn, and morally corrupt boss.

See, the corporate world is all about innovation, hard work, creativity, and always striving for success to get promoted and operate at your full potential. But you can only do so much if your boss isn’t worth the post they have been designated. It sort of confounds me how these individuals got to the positions they are at because their moral capacity and methods of dealing with ethics are foul and things really shouldn’t be that way.

Today we have got you guys a fiery story of this one very bad boss you literally play around with employees as if nothing is at stake from the employees’ side. But kudos to the big brains of those employees, they made just the right moves to use the boss’ vice against him and gave him a really tough fight. Gather your mates around because this one is a really good read.

1. It is a blast from the past, a story of an employee who was really good at his job. 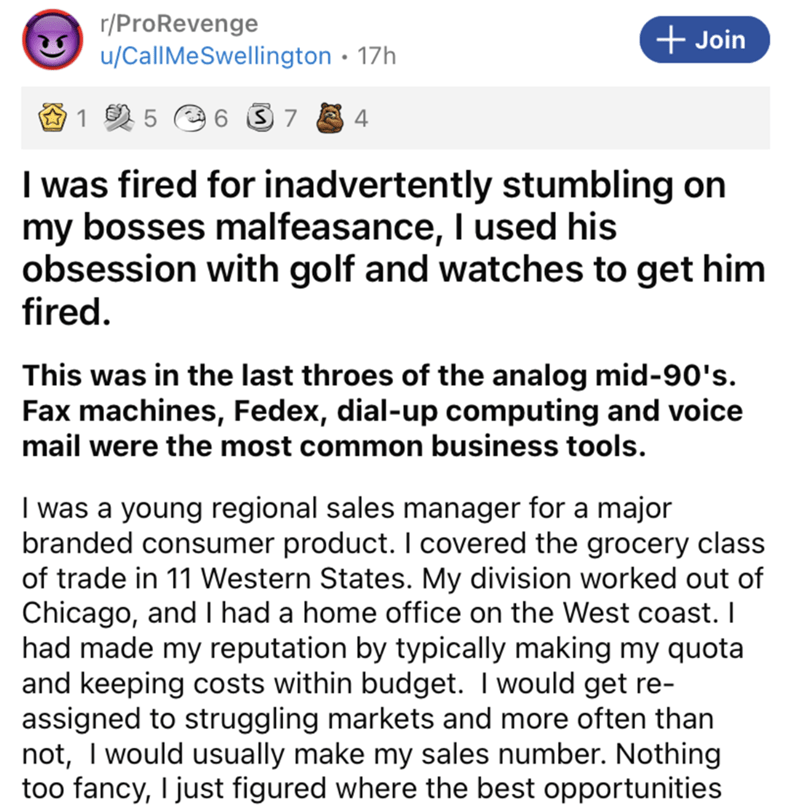 Youngbloods, are always full of energy and motivation to achieve and succeed.

2. This is kinda cool. Workers got Market Development Funds which could be freely used for whatever the hell they wanted to use them for. Illegal, yes. But really fun. 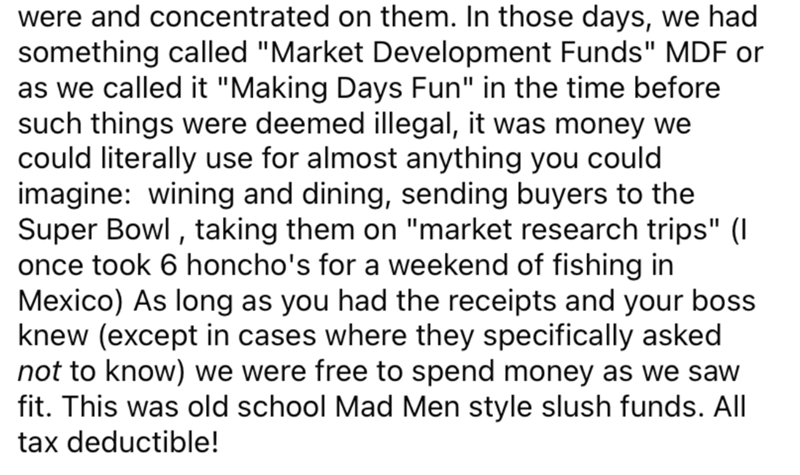 Damn, I kind of want to go back in this time and enjoy the worker’s privilege.

3. Such a sweet employee sharing MDFs with his boss, but what a weird twist in the tale. 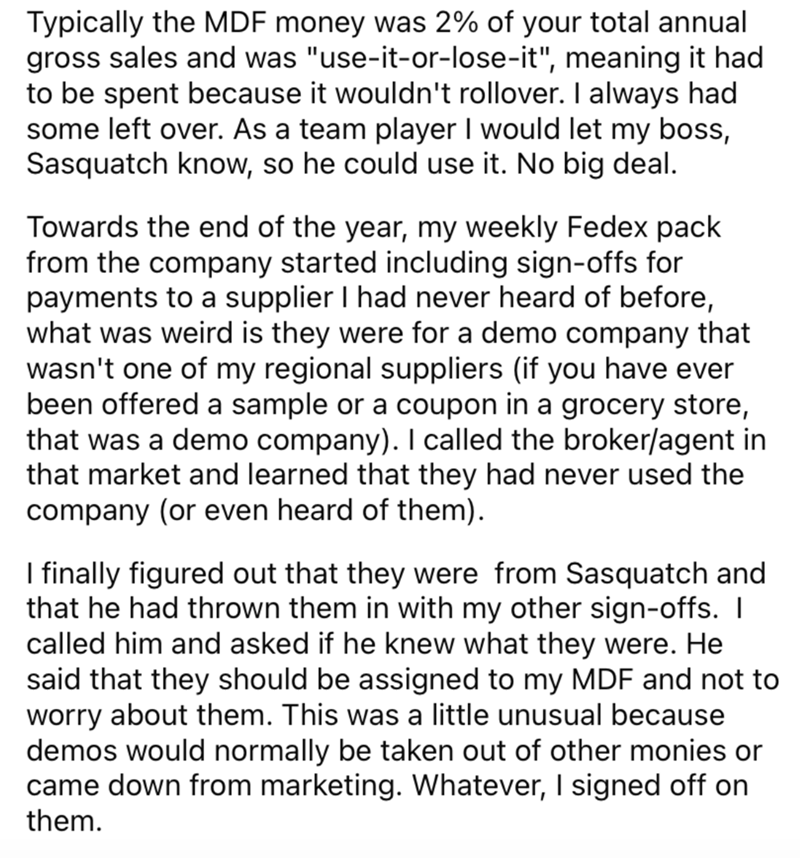 I am curious to read what happened next.

4. Woah, we were not expecting that. A really weird and sudden order of relocation.

It was very clear that the employee would refuse. Even I would, you can’t make such switches in such a short time, especially when you have a pregnant wife. This is kind of terrible from the management. 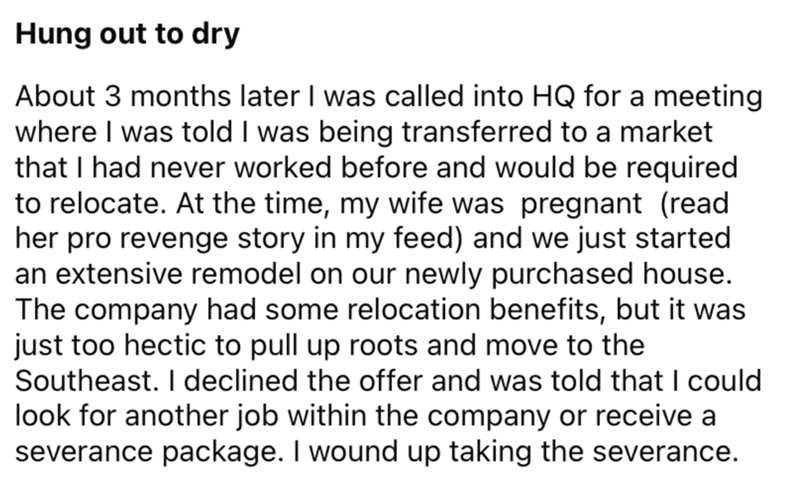 5, The employee dug deep and the research efforts resulted in a very shocking truth spill. 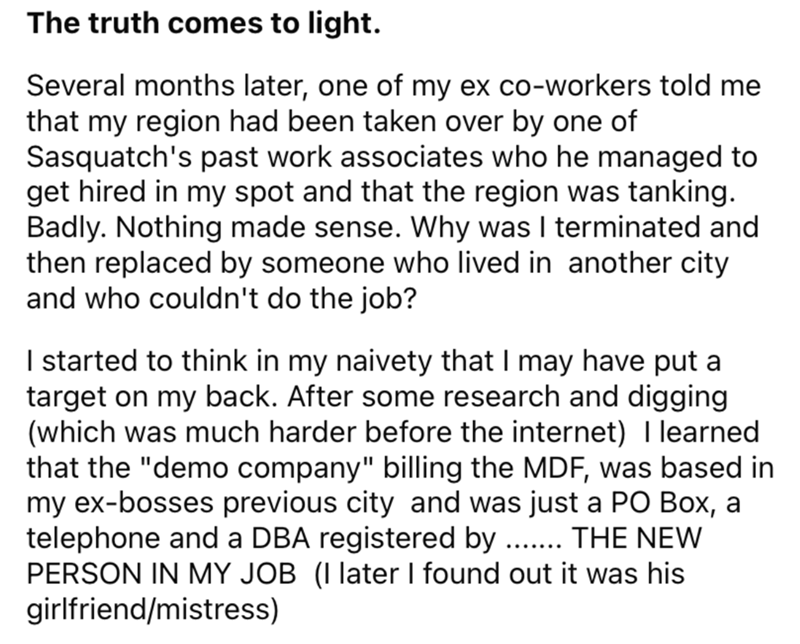 6. The sweet man was taken to the edge and he decided to take a bitter-sweet 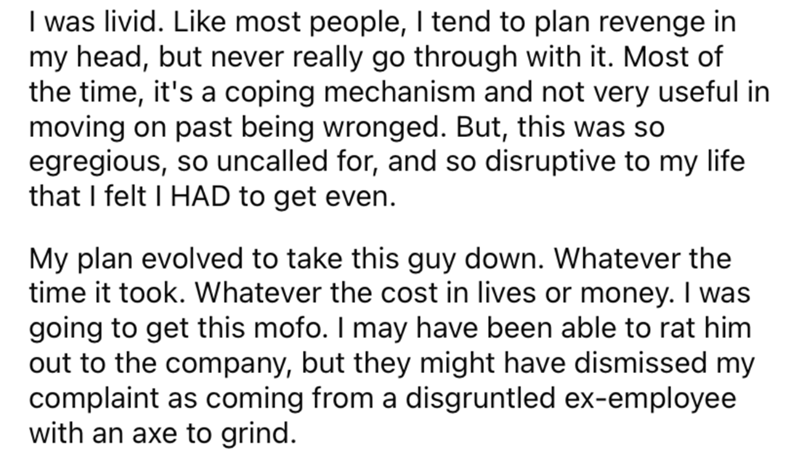 The plan was to take the boss down and things were about to get spicy.

See, that’s the thing that everyone fails to understand. You shouldn’t push people to the edge just because you think you have a higher authority. You never know what spice they pack, and this manager certainly had no idea what was about to come his way. The employee fully turned into a Sherlock.

Scroll down below to see how the revenge was planned and executed.

7. A very spicy bait was arranged based on the boss’ attractions He was basically offered all his dreams. 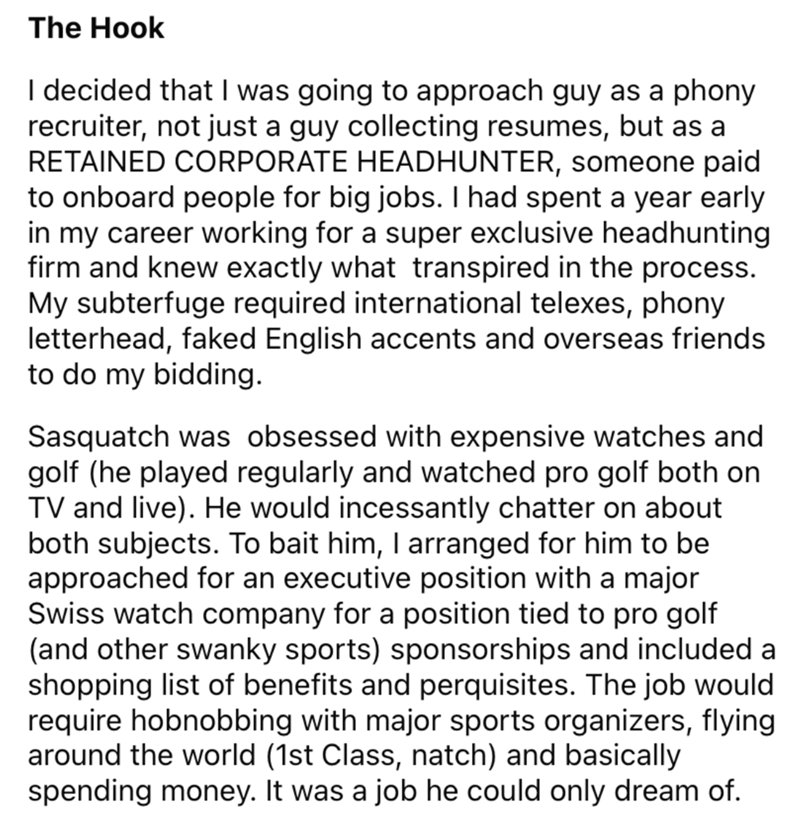 8. Oh my god, one should never mess with people who are sweet because if they are dragged to the edge, they will sting you really hard, like so. 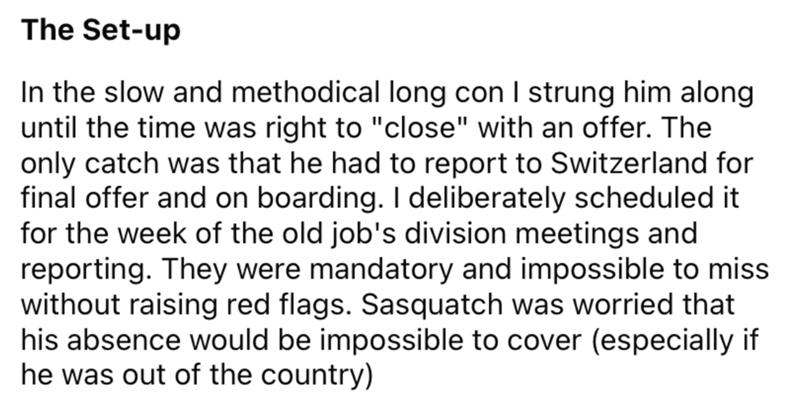 9. I am speechless. I feel bad for this manager but I kinda don’t either, you feel me on this? 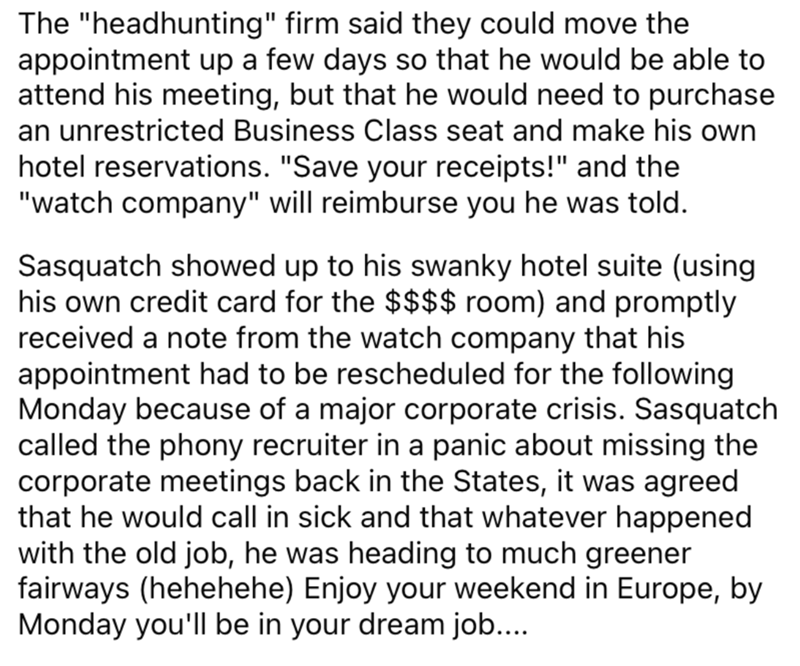 10. This revenge story totally overstepped what it was originally meant to be. This is deep, and hot. 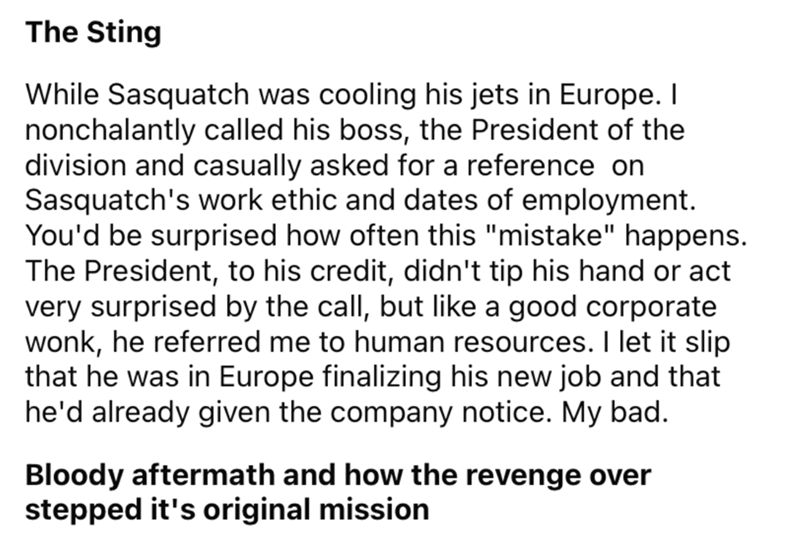 11. The offer was packed up and the revenge ninja successfully completed his mission. 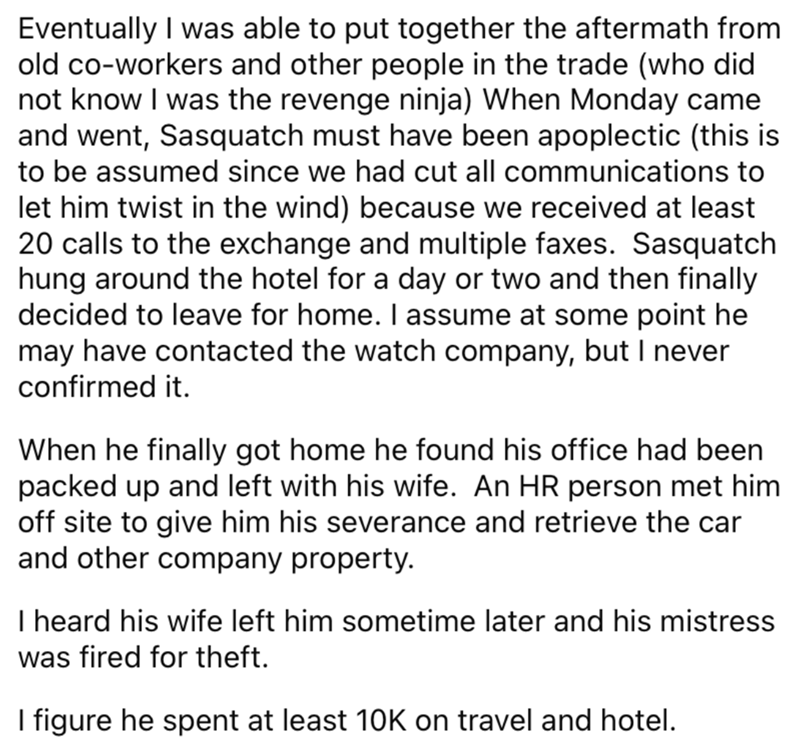 12. Damn, that would have been crazy had Mr. author told Sasquatch that, indeed, he was the one who ended his ass. 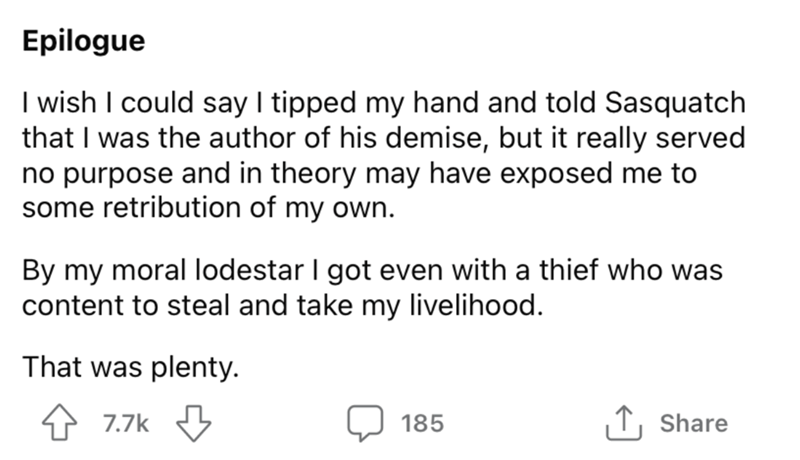 Well, well, well. There’s a massive lesson coming out of this one. One should never mess with others, ever. Because your bigger position might actually end up messing with you. Exactly how this boss ended up losing his job.