Nowadays people with photoshop skills can easily fabricate photos into something that is far from the truth. They would use a bunch of different editing tools to enhance the image and turn it into an entirely different picture. Here we will talk about how James Fridman – a British digital artist, uses his photoshopping skills to troll the internet with memes. Where people request him to change and fix their images into somewhat better looking, he ignores the given directions and edits them into something super funny. Other than making people burst into laughs, Fridman runs a foundation as well. The foundation helps support young people and children that are a victim of social issues. This helps them give rise to self-esteem, confidence, and acceptance of one’s own self as they are!

Even though Fridman has been making people laugh with his wittiness for quite a while, people still don’t seem to get enough of it. They know that they will be getting something hilarious and interesting consequently, yet the Photoshop master consistently figures out how to give out the best trolls in return. For example, he photoshopped a girl’s picture who had a friend photobombing her in the back and simply blended his face within rocks which gave a pretty creepy yet funny edit to the picture. In another instance, a girl asked James to edit her boyfriend into a boxer but he turned him into a boxer dog instead!

Fridman doesn’t believe in altering a person’s natural beauty rather he just likes to do it for fun. Like in another scenario, a girl with Muscular Dystrophy asked him to straighten her arms but he didn’t change it, and wrote, “Acceptance of your true self can be a constant battle. The term ‘normal’ is a propaganda technique used by the modern society to make us conform to a pre-existing standard.” The artist adds, “If people can’t look past your physical condition, they are most likely not worth your attention. A pretty young girl with a genuine smile and beautiful hair is all I see in this picture.”

1. Well, you should’ve specified what sort of agent… 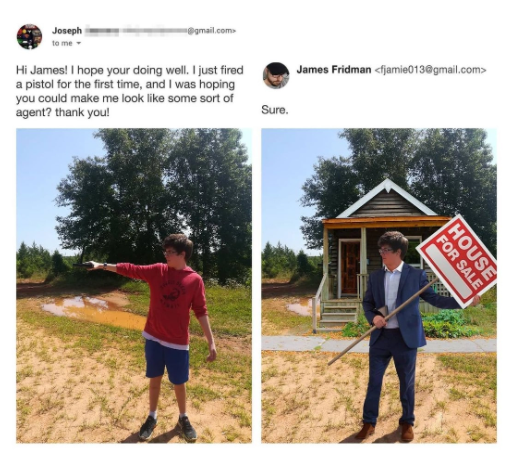 2. That’s a nice picture…of the field! 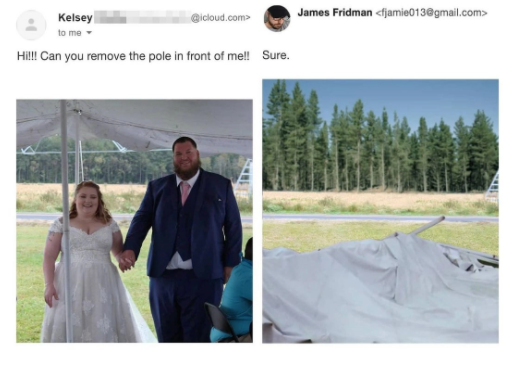 3.Whose creepy hands are on your waist… 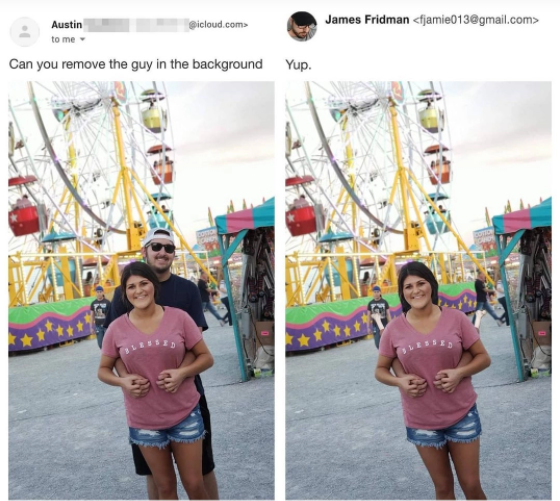 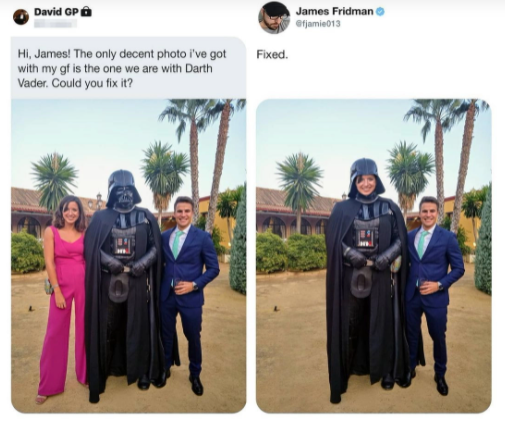 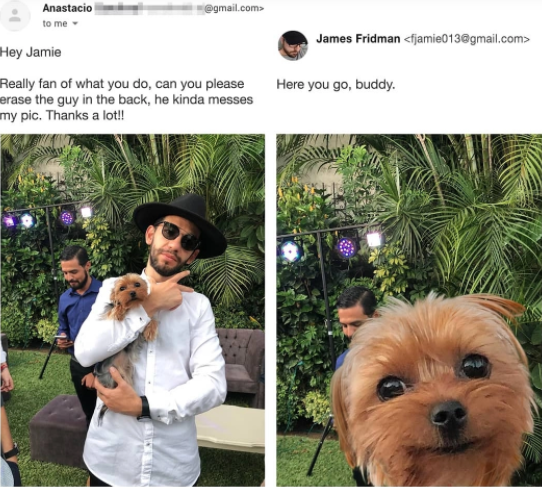 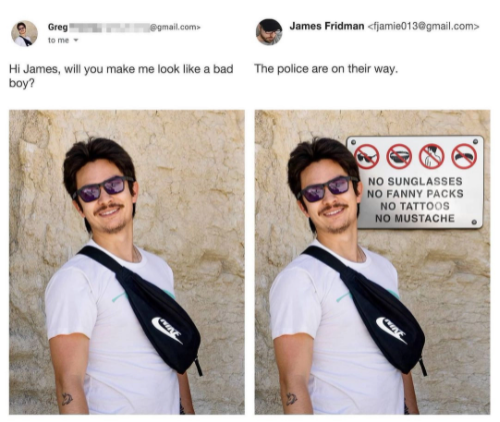 7.Roses are quite romantic! 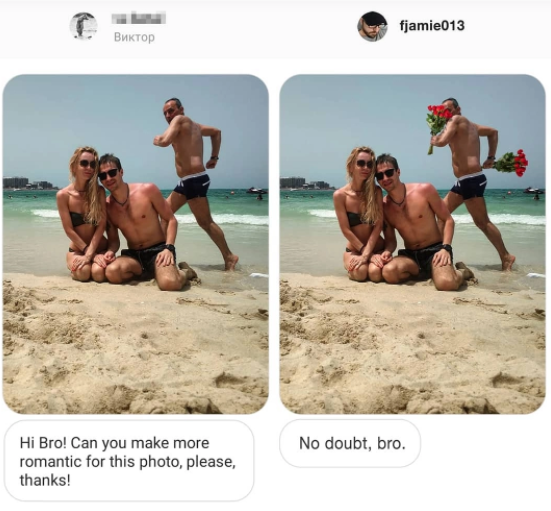 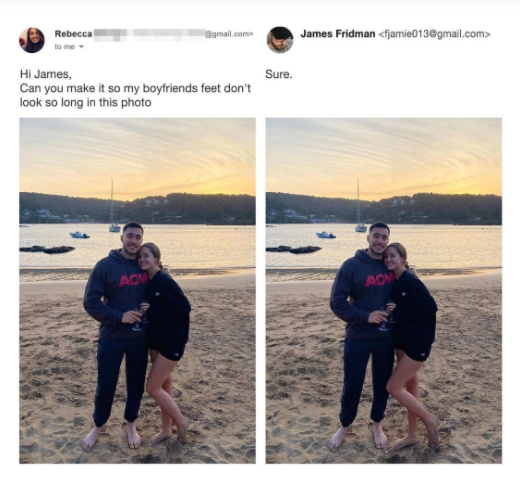 9.Oh man, that white suit needs to get cleaned asap! 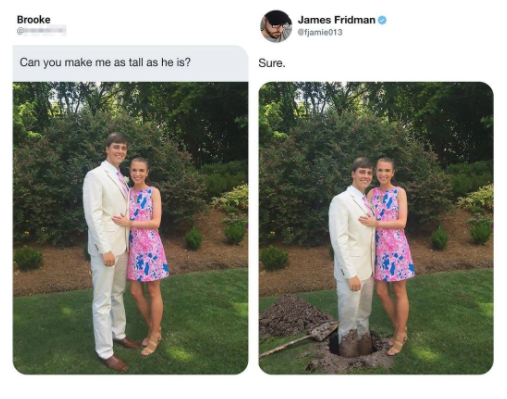 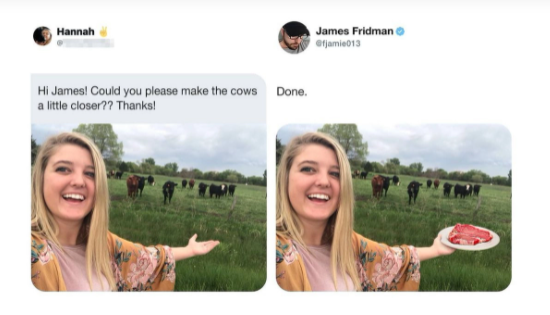 Not sure whether this is funny or creepy?

11.Ma’am you need to focus on watering the plants… 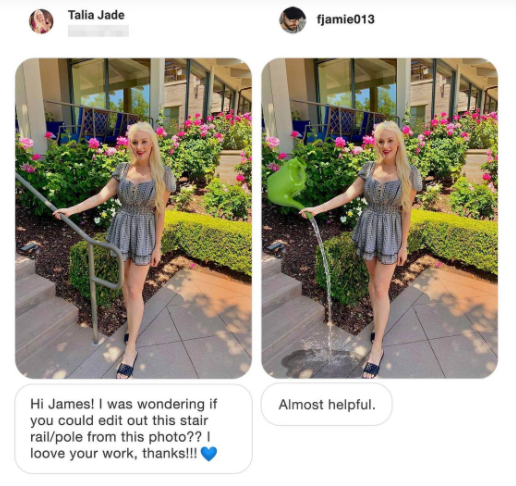 You must be gagging all the way looking at these hilariously witty and literal photoshop edits. James Fridman could be easily termed as the sarcasm king of this age with those skills! Don’t worry, you’re just halfway through the article, we have more in store for you. So, get ready to laugh off again and brighten up your boring, monotonous day! 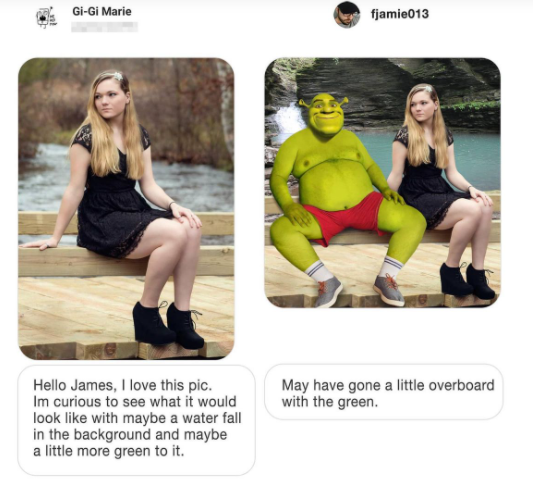 Green as in greenery or shrek? I think we need both maybe!

13.Who could’ve survived that thunderstorm? 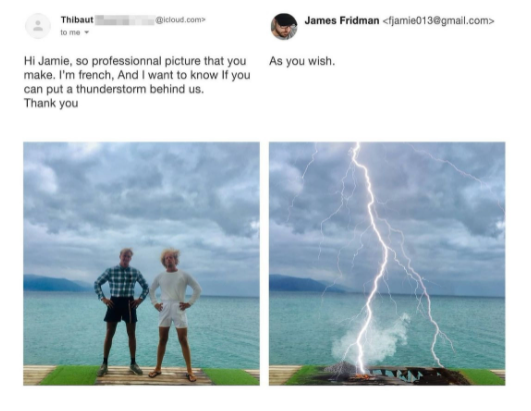 14.You must be applying for a job at the circus if I’m not wrong? 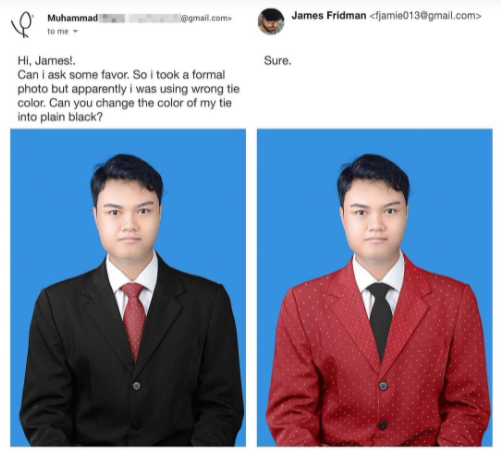 15.The ultimate dad joke of the century! 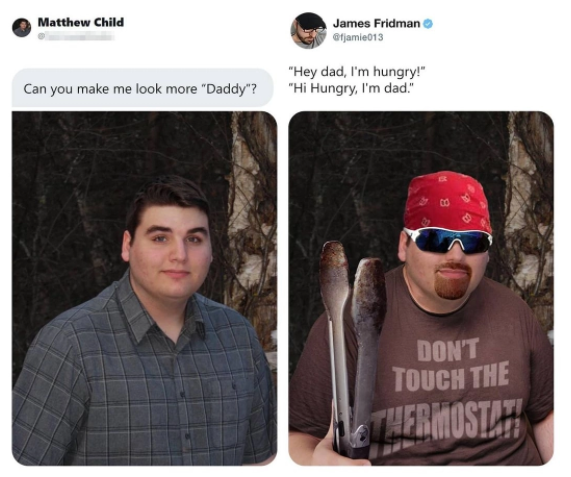 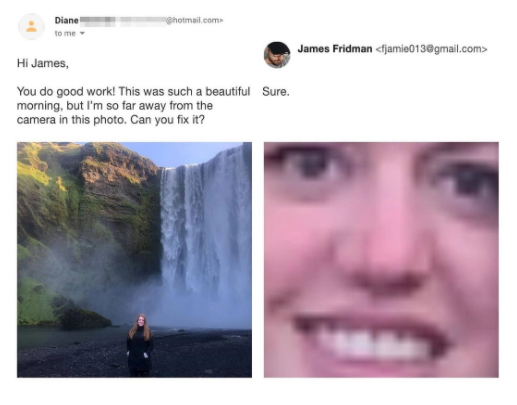 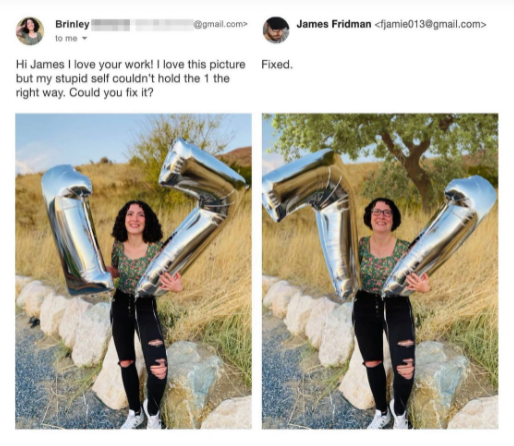 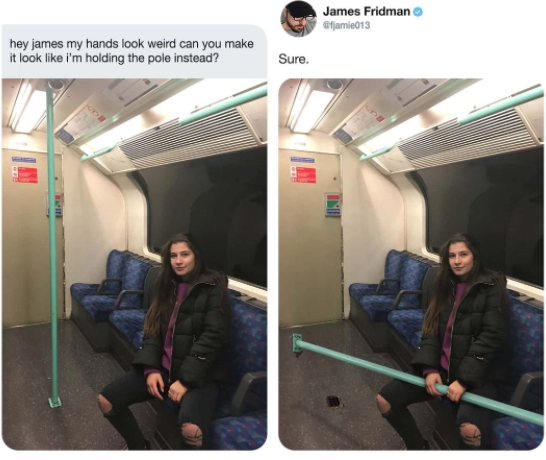 19.The boy or the head? Please specify, Raquel! 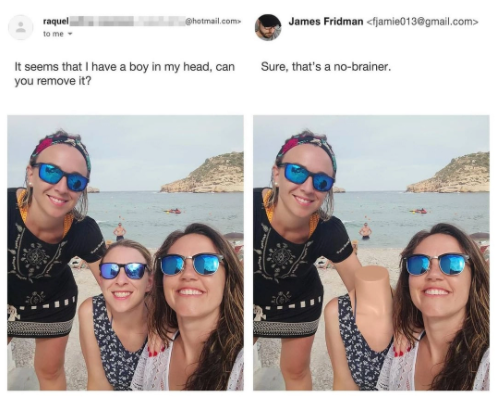 20.Sometimes all you need is acceptance! 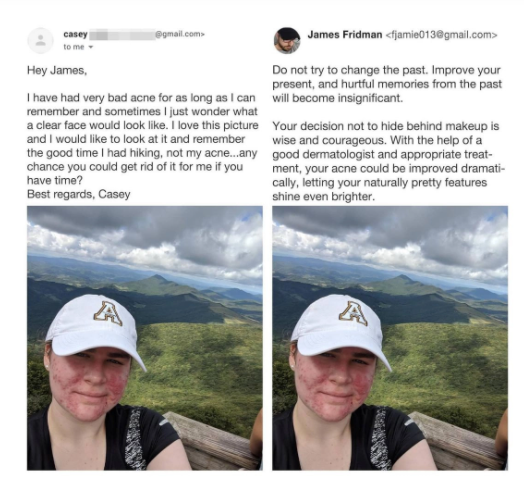 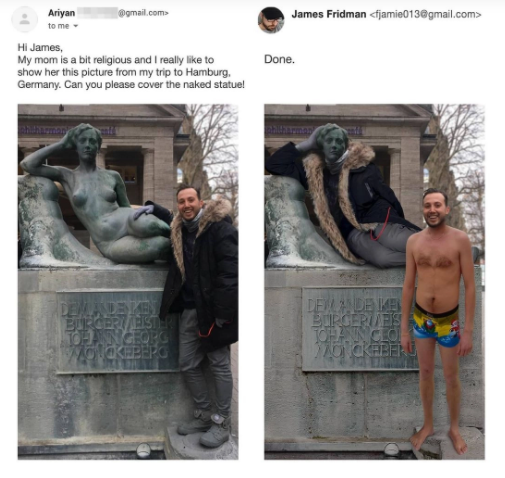 22.Seems quite right to me… 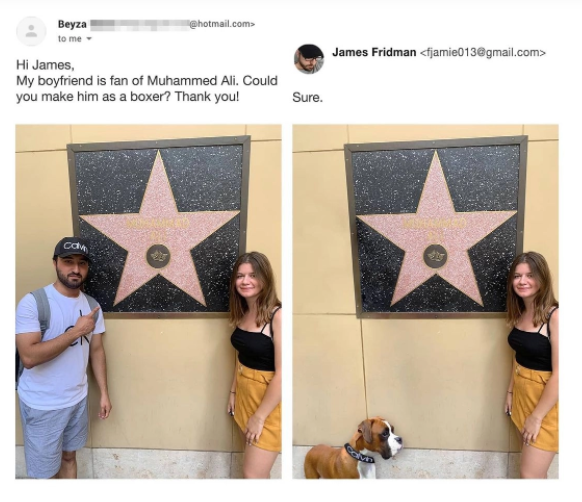 23.You’re beautiful just the way you are! 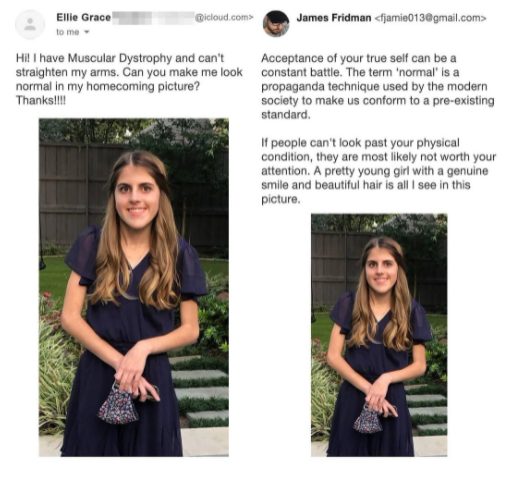 So, here we have arrived at the end of our hilarious article with photoshopped pictures that flooded the internet a few years back. James Fridman showcases his wit and humour through this skill, which made people instantly become a fan of his. We hope you’ve had a nice laugh going through all these pictures. If you had a similar experience, we would love to hear about it in the comment section below!