The most upsetting thing is to see a poor dog getting tortured and mistreated by its own owner. Dogs are known to love so effortlessly and with a lot of passion. They love you even if you do not reciprocate that much. They are just that loyal. Unfortunately, some humans are so full of hate, they do not treat their dogs with the gentleness and kindness that they deserve. They would beat them, chain them, starve them and deprive them of love. They would neglect the dog of all the love and affection they hope to receive they are brought into a new home. Most of the dogs die in those abusive homes. They never get to see the pure love that most humans shower their pets with. Fortunately, sometimes, dogs who have gone through harsh conditions eventually find a loving and wholesome family. After all the struggles they faced in their life, they deserve to have a good life with good humans in it. 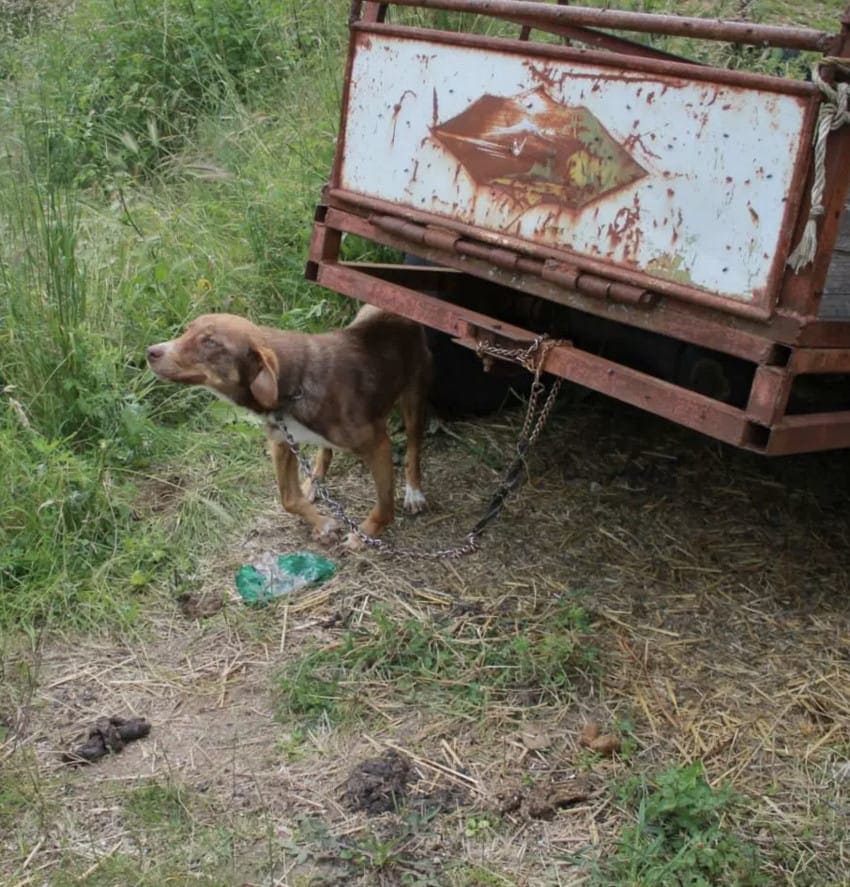 This is what our dear Duke went through in his life too. Duke is a 10-month-old dog who was treated brutally by his old owner. His owner was a vicious person who tied Duke to an old truck outside the town. Duke was left alone, chained to the truck to starve. The old owner detested Duke and did not want anything to do with him. He discarded Duke the way we dispose of trash. 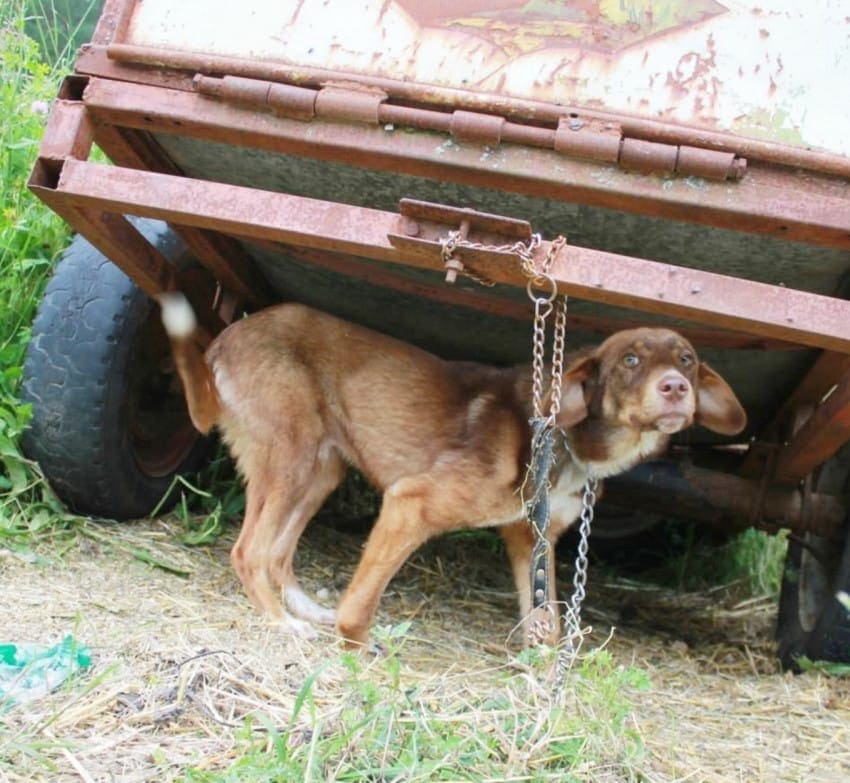 Duke went through 10 days without food and water. These days were most difficult for Duke to push through. Going so many days without any food and water led to malnourishment and a decline in physical strength. He had his own stool all over his body as well as fleas. He had a broken leg which was due to the abuse he was being subjected to by the old owner. Can you imagine the amount of abuse one has to go through that they break a leg due to it? I cannot even bring myself to think of what Duke had to go through. It is too painful. 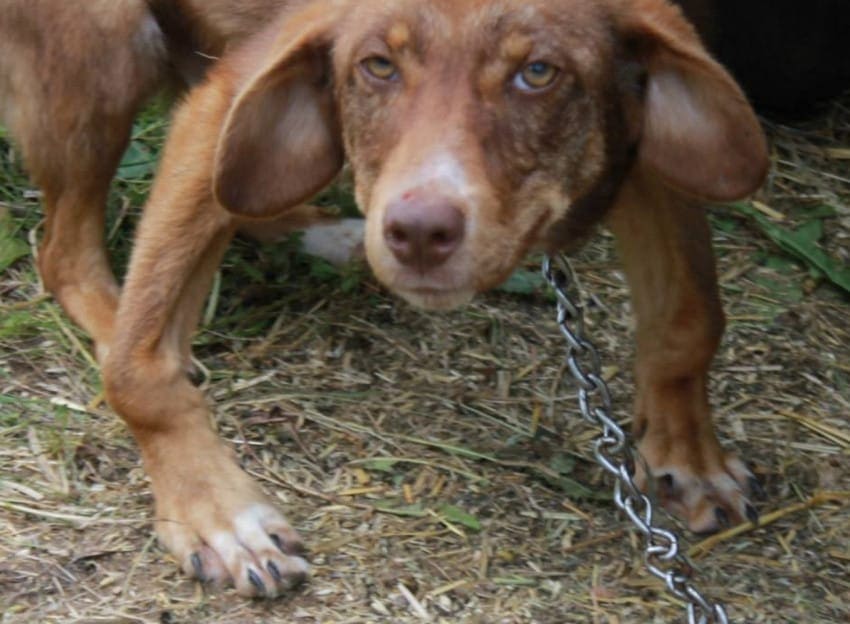 Duke was severely malnourished and weak and had a broken leg. With these many conditions, it was apparent that he could not live longer without any external help. I know all of this sounds very upsetting and makes you feel utterly hopeless but do not lose hope yet, people! By this universe’s mercy, a woman and the Rudozem Street Dog Rescue came to rescue Duke. When they noticed him stranded outside the town and rushed to help him. They unchained him and took him with them to find him further help. 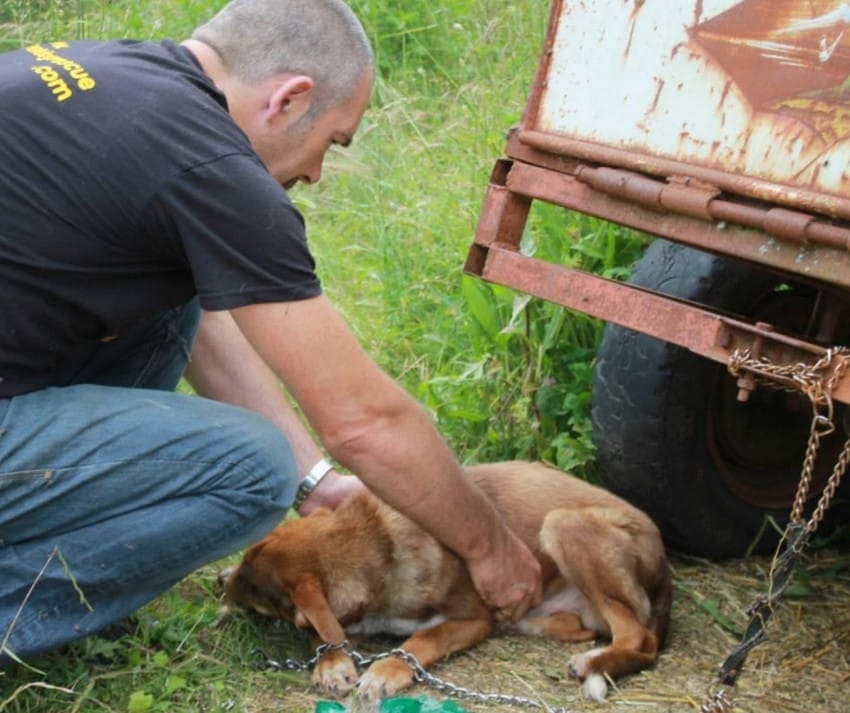 “It was a real shock when the vet said this was trauma to his feet,” Rowles explains while talking to The Dodo. “They were obviously broken. His feet were shattered. The ligaments in his feet were nonexistent. Bones were just floating about in his feet.”

I am at a loss for words. How can a human being abuse an animal so much that his ligaments become non-existent and even bones are not properly attached together? Ridiculous! 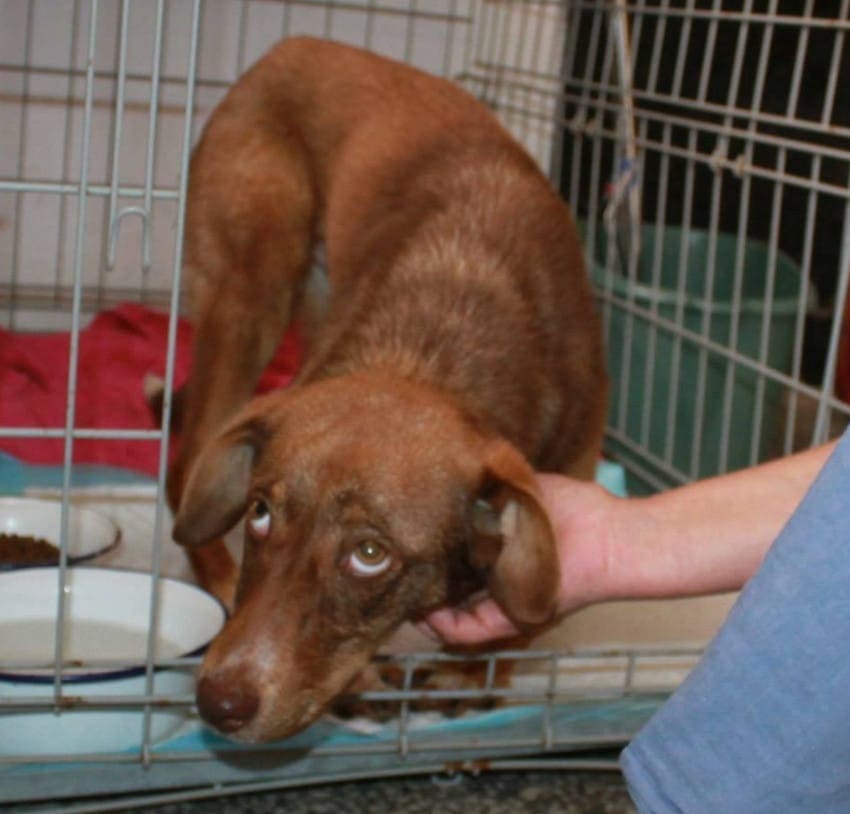 To everyone’s dismay, the shelter was full of rescued animals already. It was overcrowded and they could not afford to make space for another dog. Rowles came as an angel in this situation because he stepped forward to take responsibility for Duke temporarily while they find a permanent home for him. He took Duke with him to his home and welcomed Duke with open arms. Rowles lived with his wife and other pets, who also gave Duke a warm welcome. The wife instantly fell in love with Duke and cared for him without any limits. Things started working out for Duke. I cannot get over this picture. This hug seems so intimate, full of affection and fondness! 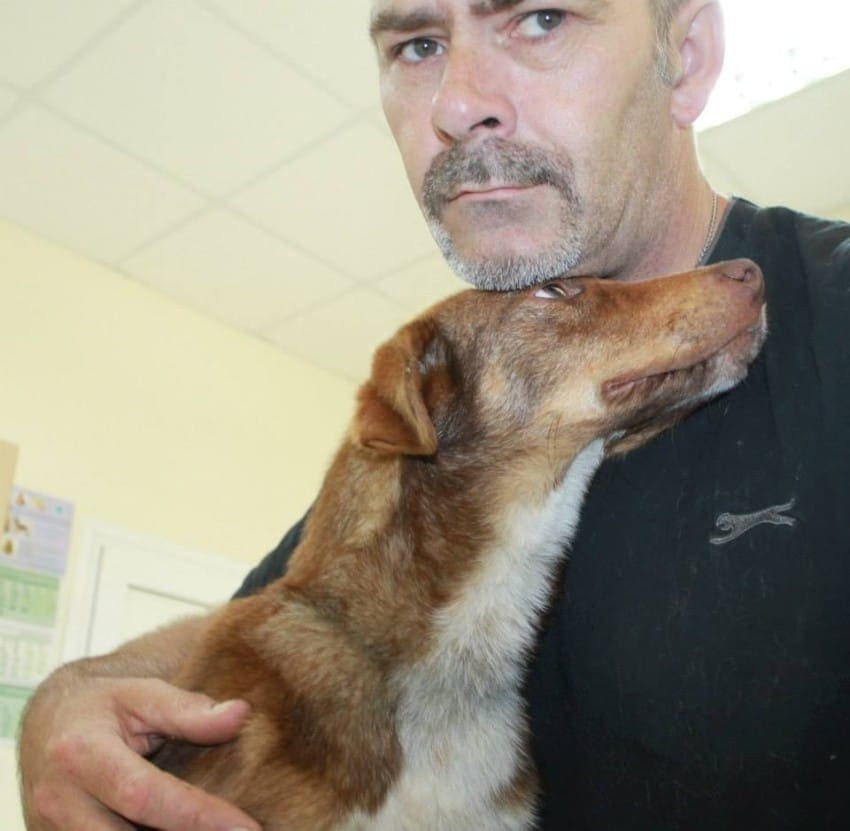 “He was OK when I approached him initially. But you could see that fear in the way he moved and the way he backed away for those first few weeks,” Rowles told. “He really made an attachment with my wife Diane. He just loved Diane.”

Given the amount of torture, abuse and grave terror Duke went through, it is a natural response to be filled with fear. It takes time to trust people around you again. It is a slow process! 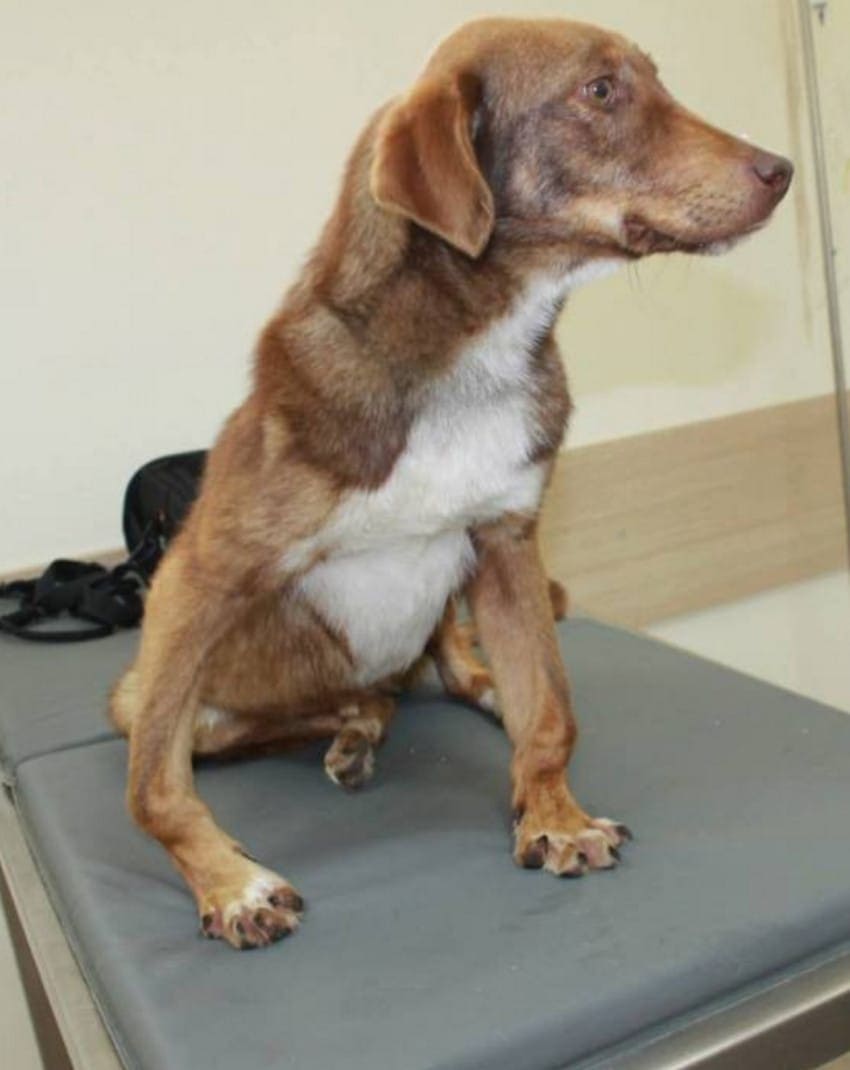 Duke had to go through surgery to get his leg and feet fixed. With no ligaments and a broken leg, he could not walk properly and whimpered around. Thanks to the doctors, Duke could walk properly now. After getting so much care from all the new humans he met, Duke started regaining his trust in humans. He was overwhelmed with all the warmth and love he received from everyone. Rowles was keeping Duke temporarily and his basic aim was to help Duke recover from his injuries and eventually find a forever loving home for him.

Eventually, Rowles found a very kind woman from England who adopted Duke with an open heart. 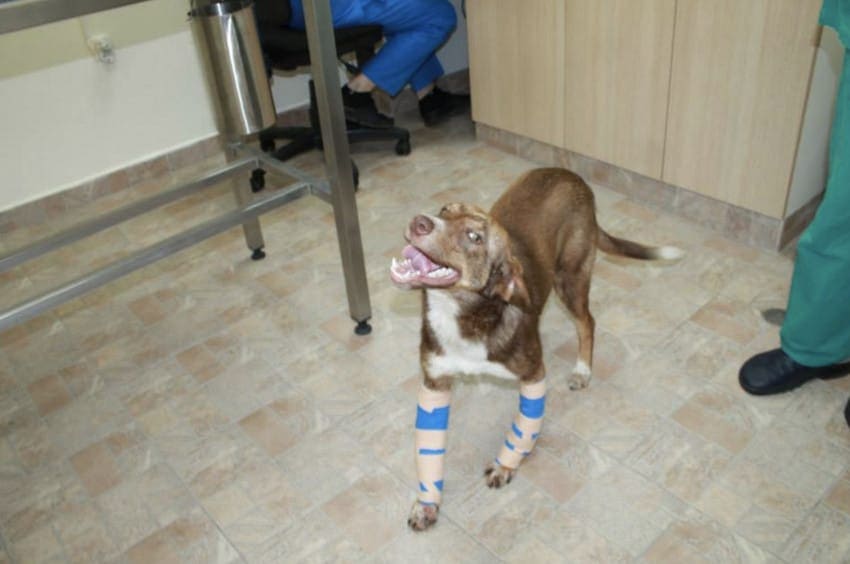 This is Duke at the vet with his legs securely covered with a bandage that helps in recovery. 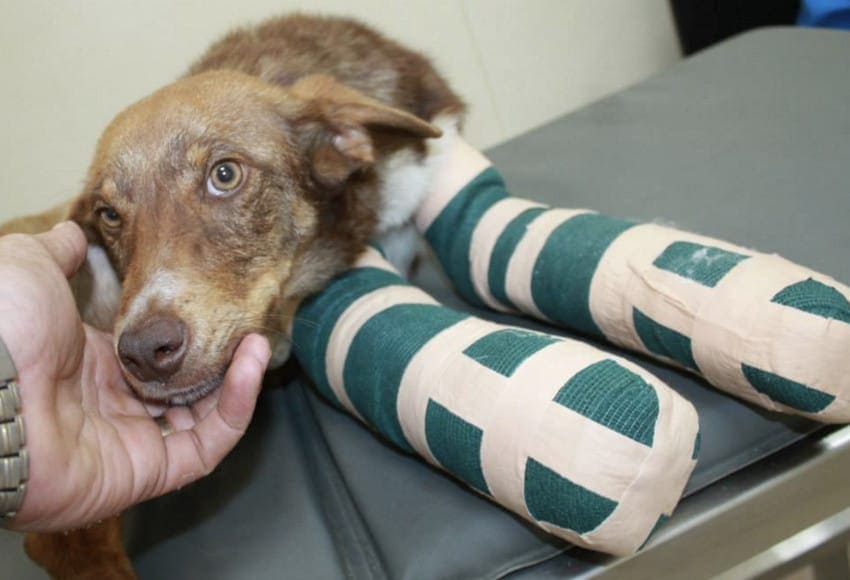 Duke with his new, kind and loving owner! 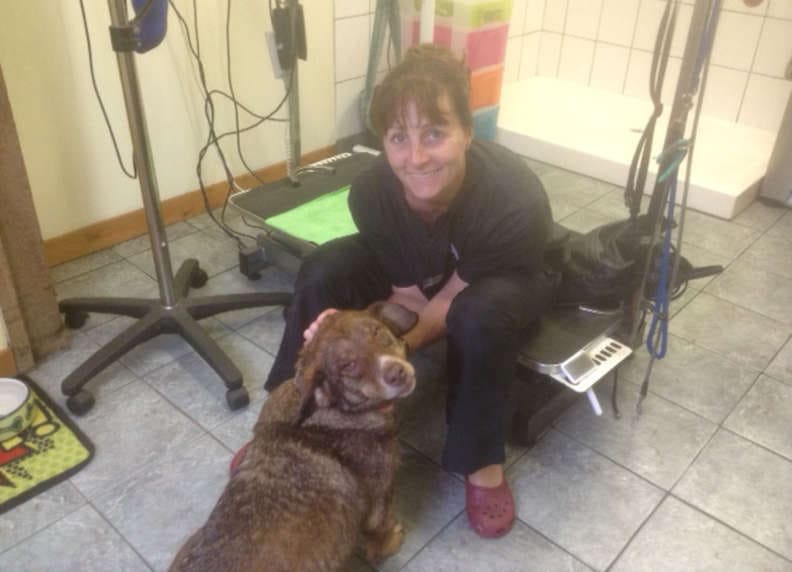 Duke is healthier than ever! 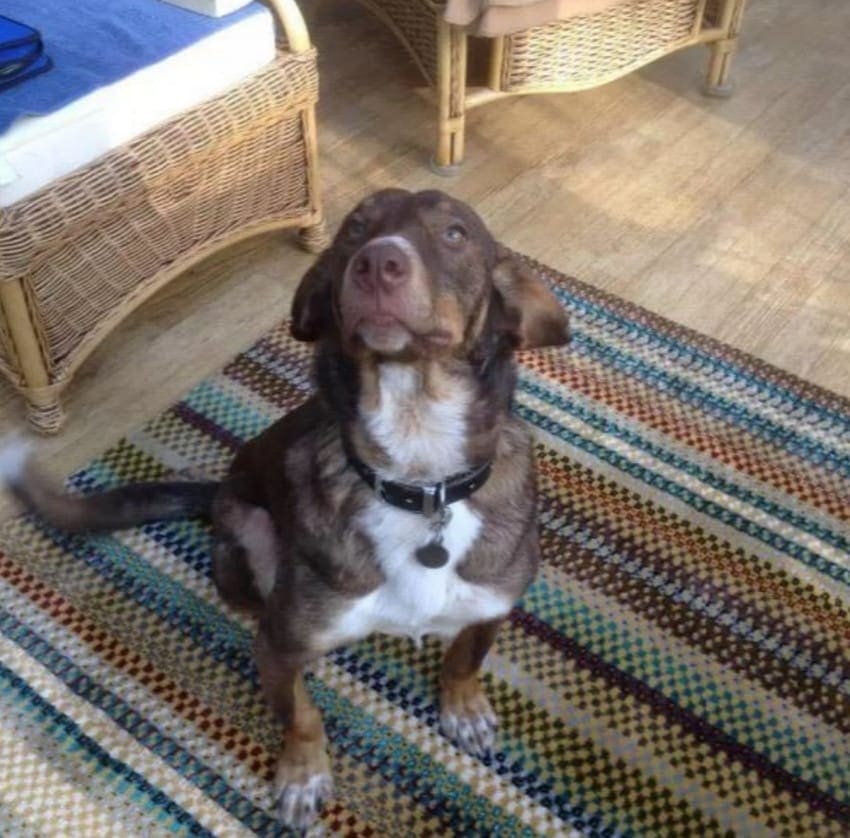 His legs recovered and he stands straight in pride because of how he pushed through all the struggles and hardships with so much strength and resilience. He was not going to lose all hope that good exists because of a hard time in his life.

This is the moving story of Duke. His experiences with humans did not have a good start. He was abused, tortured, and led to starving. But eventually, he found very caring human beings who understood how special he is. He was provided help and people stood by him to support him while he recovered. They understood the pain and struggle he had been through and did not want him to go through the same thing again. They did not just let him on his own after recovery but ensured they found a good and responsible person who would take care of Duke with full responsibility. We are so glad that Duke finally found love in life!

Have you ever rescued a dog? Let us know in the comments!