Weddings are those special, once-in-a-lifetime events that a lot of people dream about for a good part of their life. While women look forward to the day they’re married, popular media often depict men as recoiling against the prospect of marriage, for one reason or another. It’s also quite common for people to try to steal the thunder, as it were, of the bride by making their own announcement at the wedding.

Usually, this takes the form of an engagement, a pregnancy announcement, or something extraordinarily special. This forces everyone to cluster around whoever announced that instead of the bride. This is why this story is so different and so much more than you’d expect because by the end of the day, you’ll probably agree with her “stealing the bride’s thunder”. 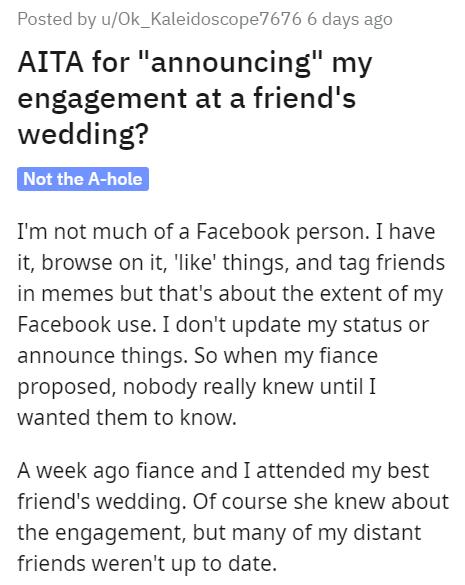 #2 It was an honest mistake. 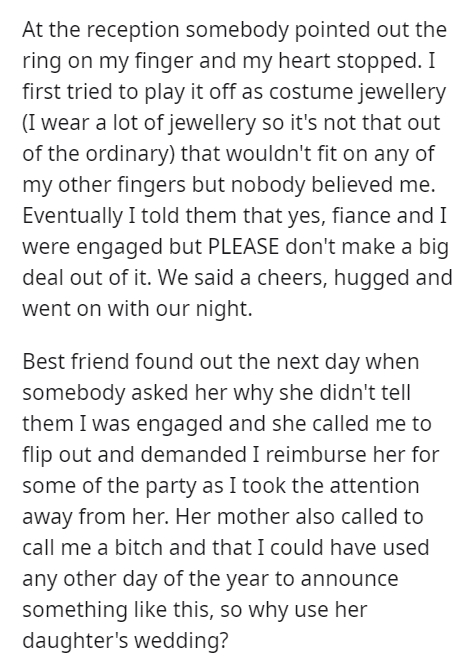 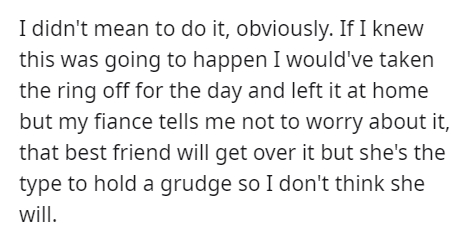 Even if they did it on purpose. Nobody owes anybody to “reimburse them” for their wedding because they shared something exciting at some point, let alone it being accidentally revealed. And in this scenario, it was neither deliberate nor did the person getting married even realize it until the next day. Also being called a “bitch” over it? Seriously? OP totally needs new friends. This type of entitlement and rudeness is definitely not something I wanna keep in my life.

NTA in the slightest.

I think this desperate need for the “spotlight” to never for even a second leave the bride and groom is unrealistic and frankly silly. I mean, proposing at the wedding? Clearly a no no. Literally announcing your engagement as in announcing it during your toast and/ or stealing the DJs microphone? Also not okay. Wearing your engagement ring should be fine, and a bride or groom getting bent out of shape because a friend you’ve lost touch with noticed and spent 30 seconds congratulating you instead if staring in adoration at the bride and groom eating asparagus? Silliness.