Karens should really get some glasses.

I can’t understand how so many people can mistake someone for a store employee. At least the store I go to have employees who wear an identical uniform, so it is never really that hard to figure out. And besides that who would think an employee would be in a soldiers uniform? It is as if they don’t even use their brain most of the time. You see this particular Karen insisted that this soldier help her because he was helping an old lady.

Mind you, he was only helping her because she asked for his help, and she knew he wasn’t an employee. Nobody likes to help entitled people. And we all know how Karen’s can be top of the line when it comes to entitlement. So just scroll on below and read the whole story for yourself. It is bound to flare up your anger. And just remember ‘Customer is not always right.’

After all, we know this is the first story of this sort. It apparently happens a lot.

First we get a bit of background on what he will be calling the people in this story. 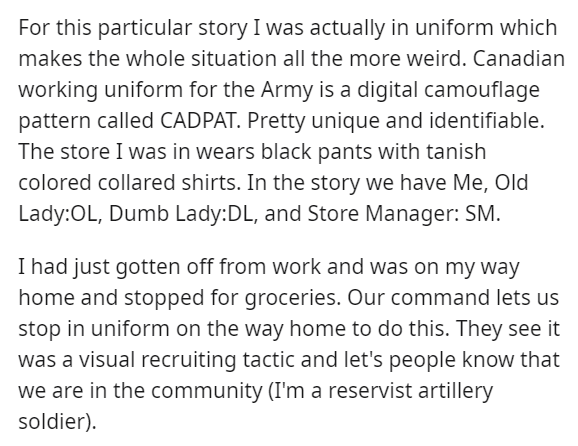 He was just trying to help this lady who couldn’t carry so much weight. 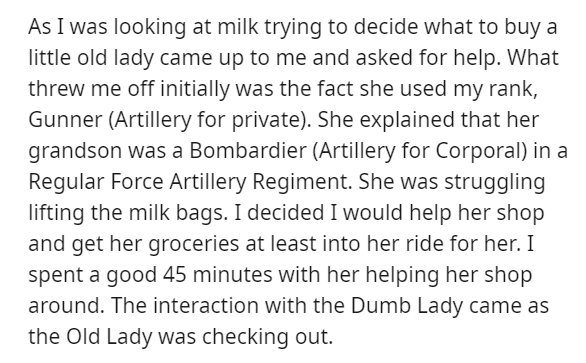 What’s a milk bag? I’ve seen cartons and gallon “jugs” but never a bag. Is it in a Capri sun pouch?

Edit: according to my research, Ontario does bags. Which are put inside of jugs…the corner is cut off inside the jug and that’s how they refrigerate and pour milk.

The rest of major Canadian cities do not use bags. I suppose a gallon food grade plastic bag is handy, especially with a vacuum sealer. But a jug has so many more purposes.

I use milk jugs in the summer 1/3 filled with water to keep cold water around during hot work.

I think they probably use the same amount of plastic approximately, but a rigid jug gives you a lot of use when combined with a funnel. –TilineHeadHunter

He told her many times that he doesn’t work here, but the Karen wasn’t willing to listen to reason. 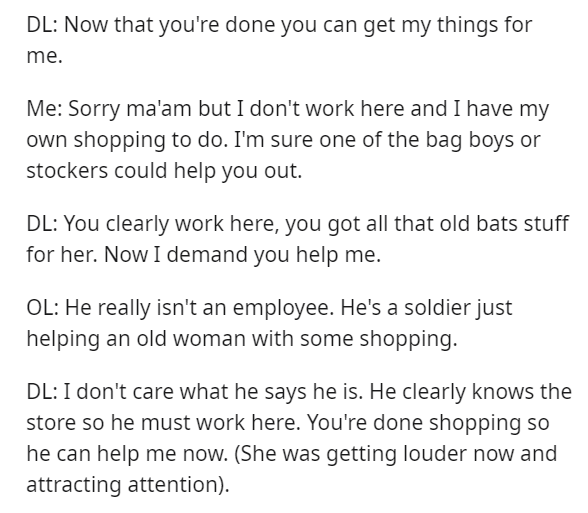 It’s as if the woman was blind to what uniform he was wearing and treated him like the dirt on her shoe.

A customer can’t magically make some stranger an employee! This woman is clearly crazy. 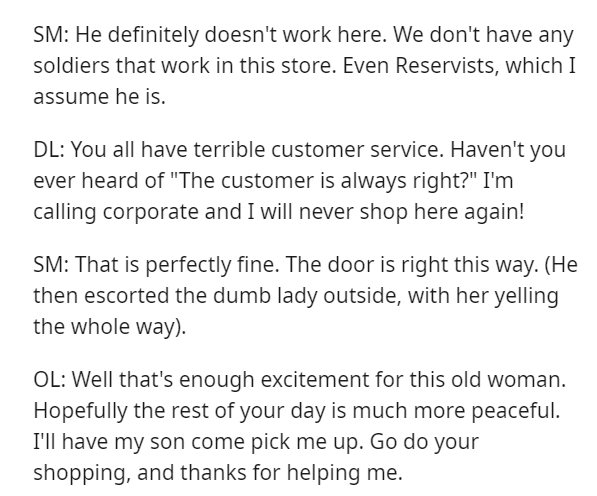 At least he got a discount for all the trouble he had to face. 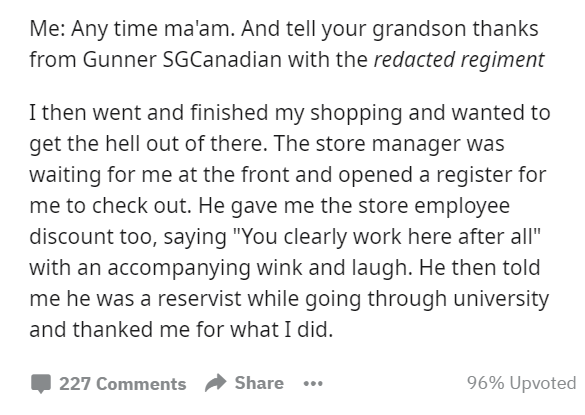 When I worked at McDonald’s there were 2 plaques in the break room, one above the other that read:

Rule 1: the customer is always right.

Rule 2: When the customer is wrong, see rule 1

I fucking hated that plaque… The thing is, that Rule 1 applied to EVERYTHING, even when we did our jobs, Management KNEW we did our jobs correctly but then punished us so they could tell the area’s head office that they dealt with us, just in case an entitled completely in the wrong customer complained. Yup, we used to get punished for correctly doing our jobs just because a customer got pissy and complained.

That phrase needs to go the way of the dinosaur and floppy disk. –TidalLion

Surprisingly enough most comments were about he needs to be careful about his hearing. 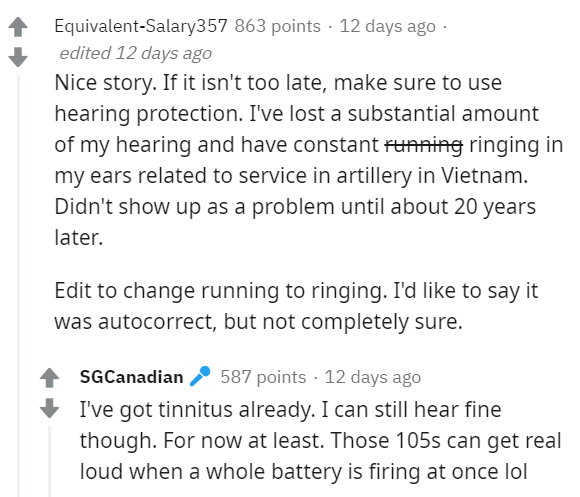 Apparently a lot of soldiers have this problem. 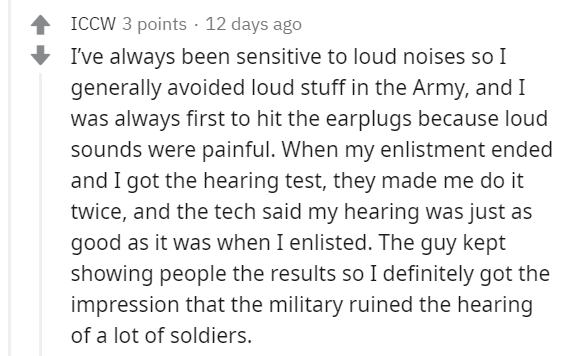 And most soldiers don’t have ear protection. 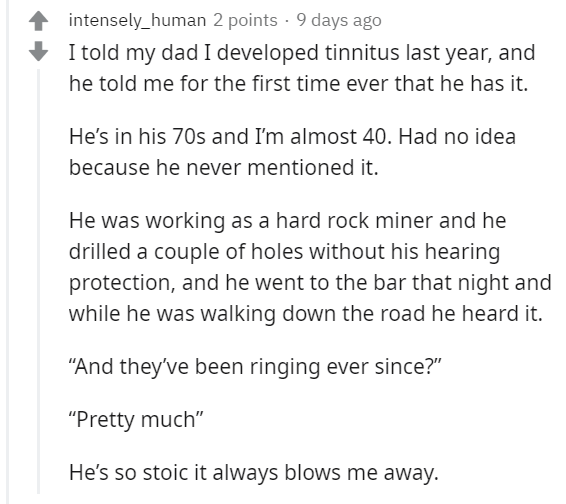 At least some people can find the humour in it. 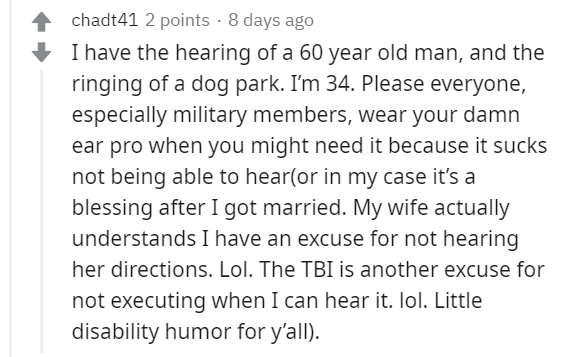 She was just plain stupid. 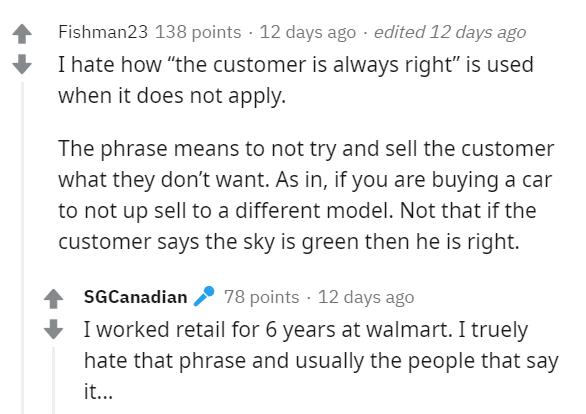 That is what the phrase is supposed to mean but who is going to tell all the Karens? 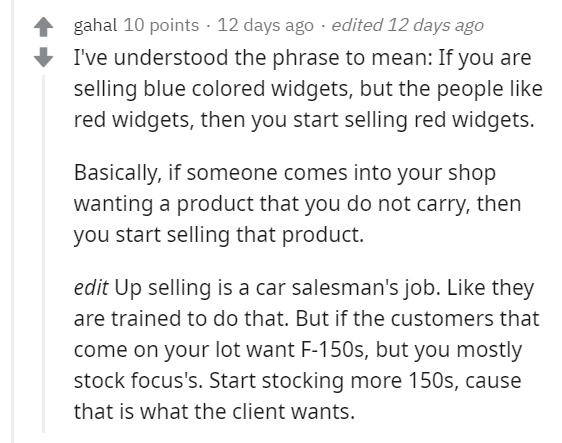 Has anything like this ever happened to you? If so let us know in the comments below and don’t forget to share.