Snow globes are a fantasy from our childhoods. They had this charm that amused almost every kid and they could play hours and hours with those. Turning it upside down, watching the snowfall covering everything that has been encased in the globe and hiding away all the colors in a blink of an eye.

Snow globes based on scenes from your favorite movies would be a wish come true. A lowkey artist,  Álvaro G. Echave Art, revamped all his imagination and encased it in snowglobes. He gathered his favorite characters from the movies, let’s say Rey from StarWars, and designed some real standouts.

We gathered a few of these samples for you, they’ll sure make you wanna have them in real. The internet however is already flooding with personalized tees and caps with the snowglobe series printed on each. People are loving them! And we’re sure you will too. These will make you want to go out and get them! Scroll down and check these out; 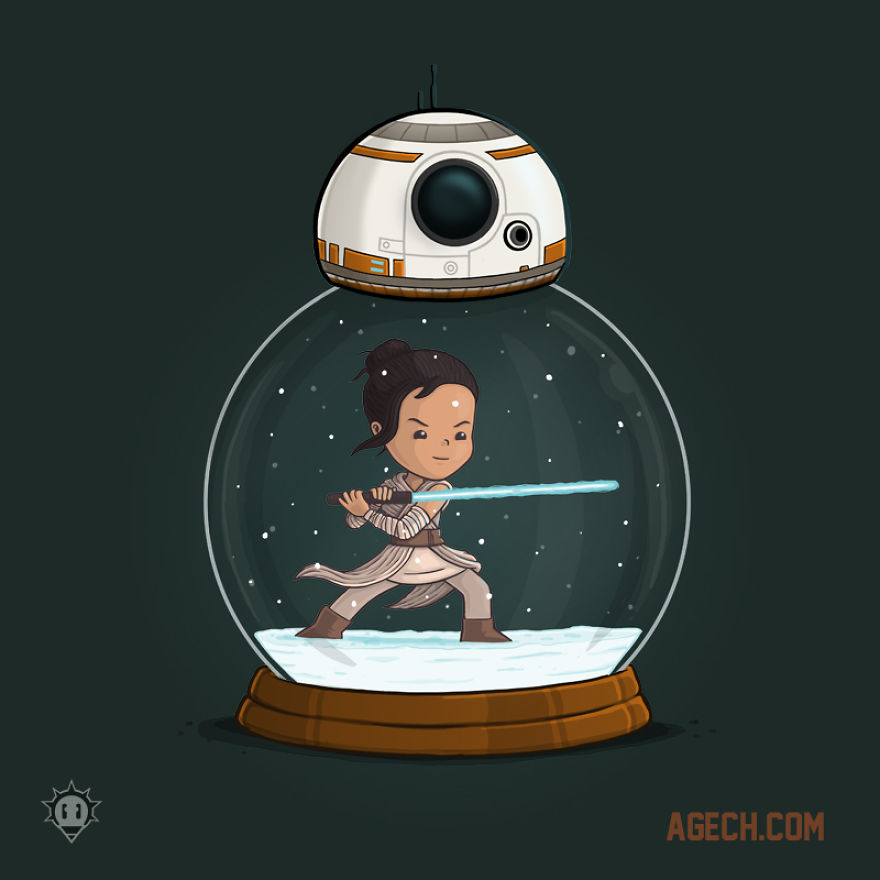 Do you remember Rey from Starwars and the BB-8? Despite being an astromech and having the dialect of a droid, Rey however understands this robot pretty well. Here’s a perfect depiction of their hidden bond depicted through a snowglobe. Where BB protects Rey while she is all set to be a warrior! 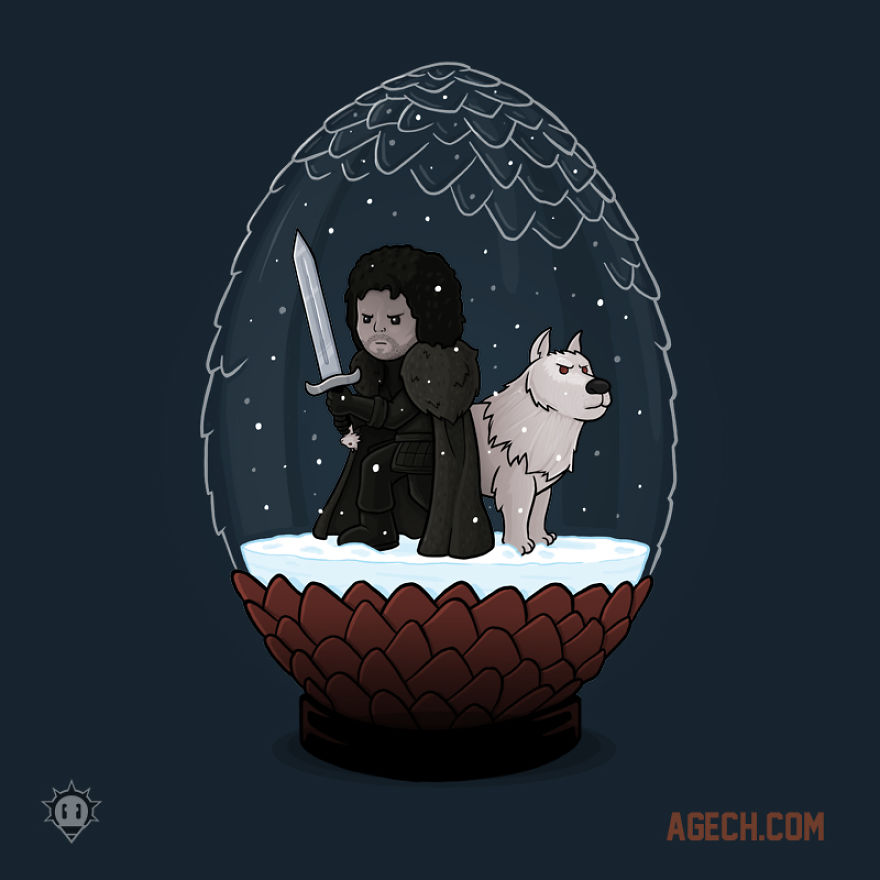 You guessed it right! This one is based on Game of Thrones. Forest-themed snowglobe based on scenes included in GOT featuring ravishing Jon Sow and the ghost. The concept behind featuring these characters in a snowglobe was that all of these relate to winter, darkness, and mystery. Girls would love getting their hands on this one, to be placed on the side table, and to cherish their fan moment every morning! 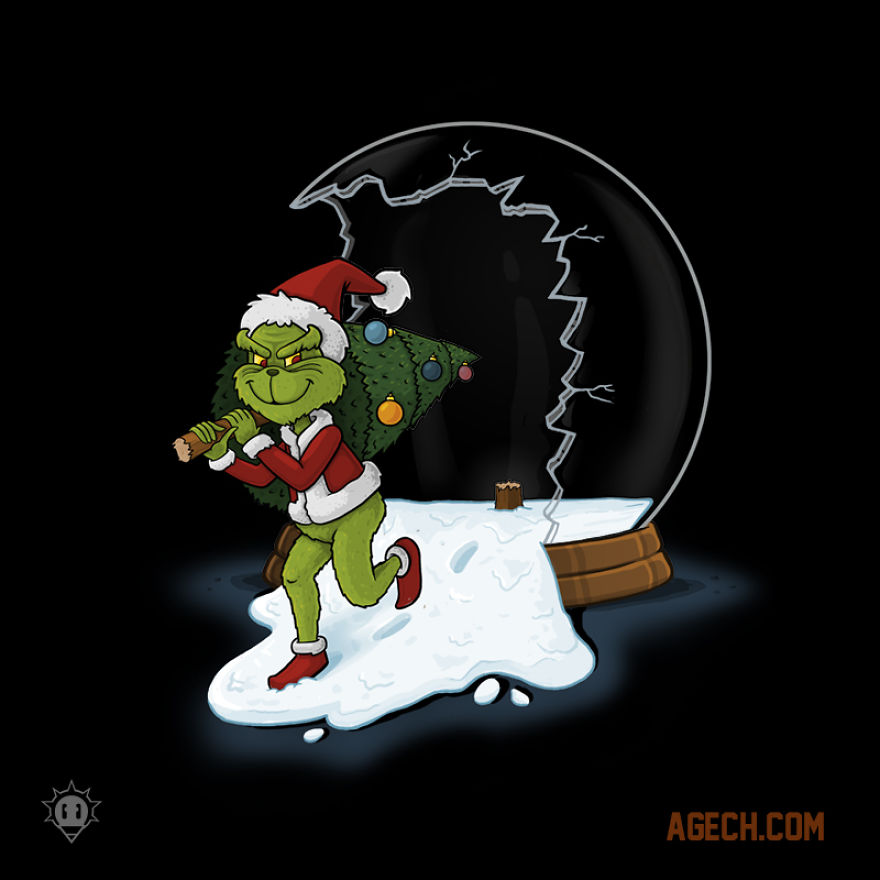 This one is for someone who loves dark humor and is a Nyctophile. Grinch steals Christmas because he just hates all the warmth Christmas brings with it, It has been just a nightmare for him. And his plans have been revealed through this snowglobe art, accurately!

What are your grounds for stealing Christmas? Perhaps, not everybody is a big fan of carols, after all 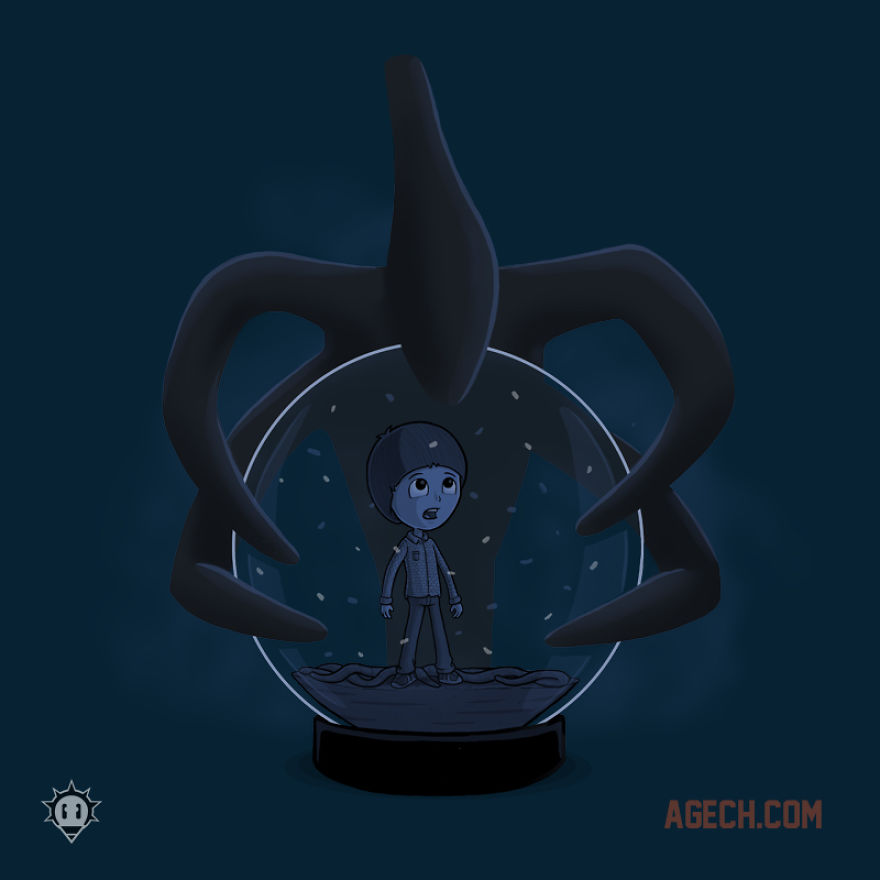 What happens when stranger things take over the snowglobe? It’s been perfectly depicted here. The artist isn’t taking it easy in featuring the star-struck characters from some of our most admired shows! Here’s a supernatural hand grabbing away our long-adored wintery globe. How are we going to unravel the gloomy secrets behind this mission? 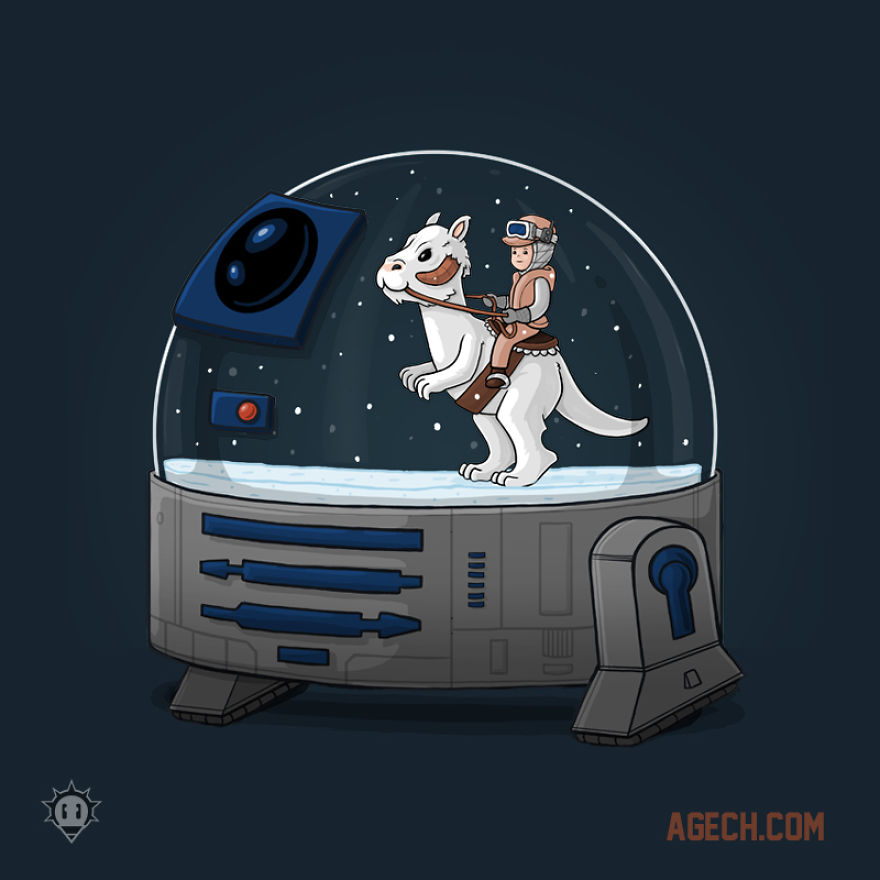 Mission Hoth, our devoted soldiers flee to Hoth in the darkest hours in its icy cold climate. Here’s Luke Skywalker riding a tauntaun, a strange-looking creature from Planet Hoth. How amazing is this illustration, where the snowglobe has been portrayed using an R2-D2 Astro-machine encasing the brave fighter of Rebel Alliance. A classic Starwars souviner! 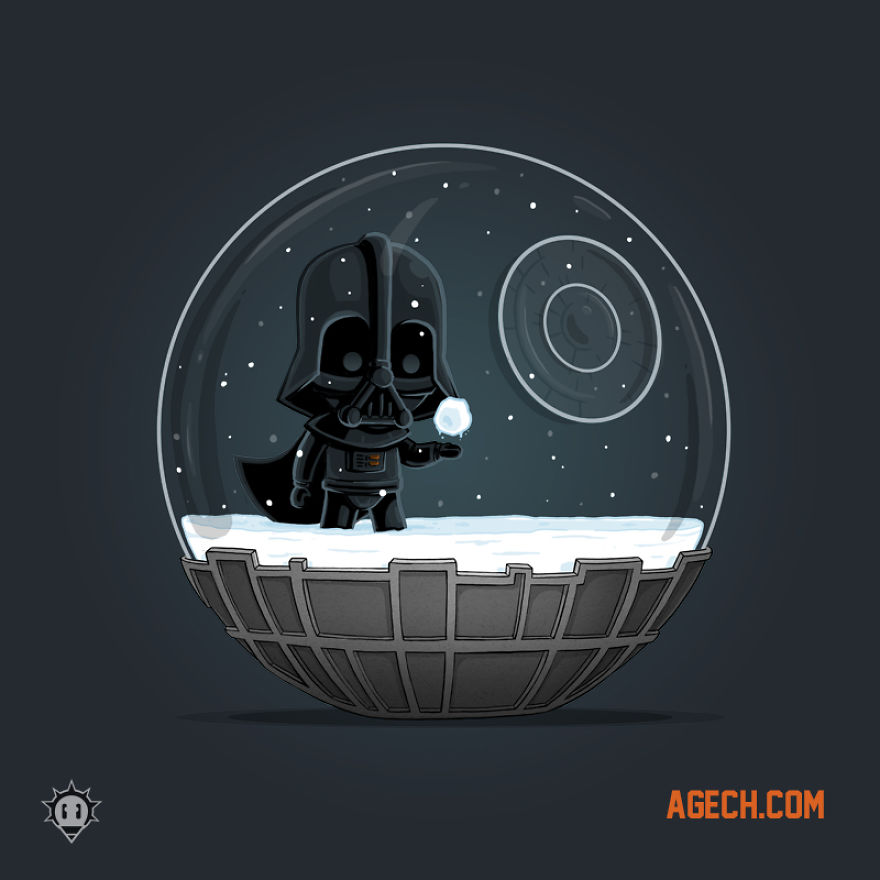 Another of the Starwars classic featuring Darth Vader. This literally depicts how a powerful knight when seduced by the darker forces becomes a sith lord… 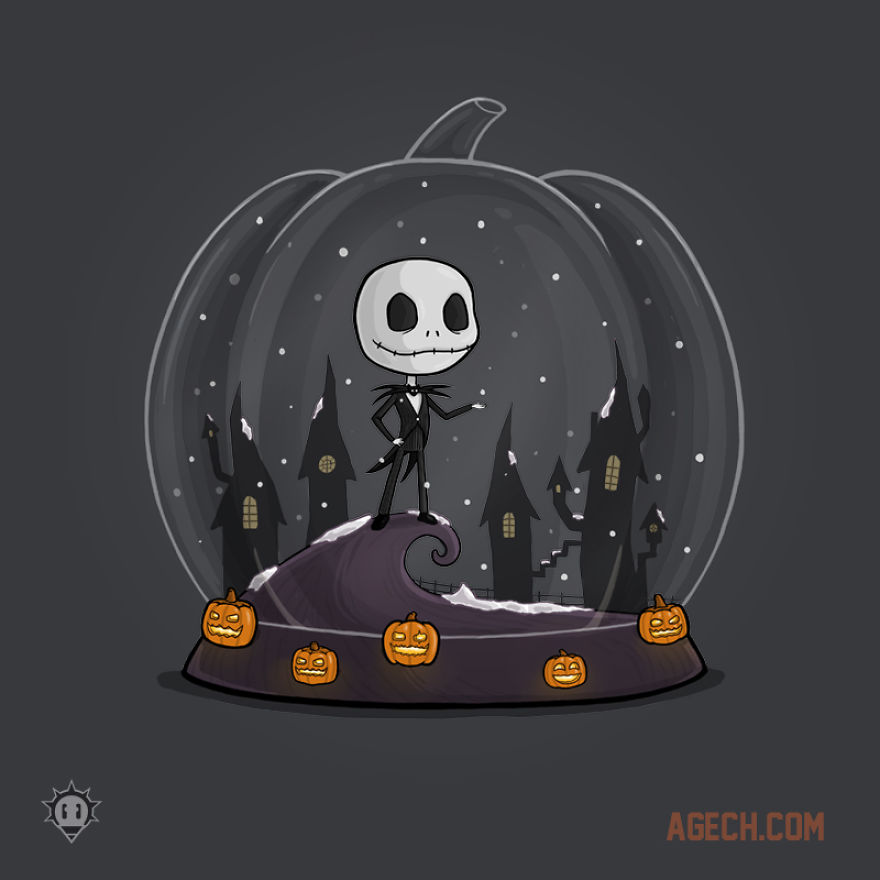 When Christmas gets warp up with Halloween it becomes a nightmare. Halloween snowglobe featuring Jack Skellington aka “Pumpkin King”, is characteristic of Halloween. With a touch of spook, it’s waiting to be part of your Halloween decor.

Aren’t these magical? They have a charm of their own. An artist’s imagination is boundless for sure! Blending in our ever-loved TV characters with charms of our childhood is something to be adorned. I know you must be wishing you could find these mystical snowglobes on shelves in the stoors near you. Which one among these, you would have placed right beside your bed, if you get the chance to get your hands on them? Do let us know in the comments section below.