No matter where you live in the world, you’ll hear stories of theft and robberies. There is no place on earth that is a hundred percent safe, secure and free of any kind of evil. Everything is in balance. If there is good, there is bad too. Speaking of this breaks our heart but unfortunately it’s true. Sometimes when things get extremely ugly and a person has already had a rough start in life that person becomes inclined towards opting the wrong ways of getting what he/she wants.

Although this is extremely wrong, but some people are raised like that. They are professionals and they won’t spare anyone. Even their close-knit family and friends. The worst part is that they would even sweep away your undergarments if they get a chance and upon getting caught they would simply refuse to admit their crime. We came across an absolutely hysterical Reddit post where the OP who had moved to a third world country from Italy was robbed by her own cousin who even stole her underwear along with other things. Scroll down to read the whole story. 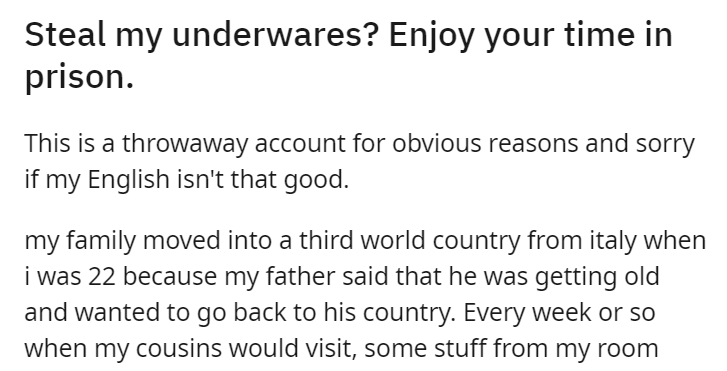 This guy’s got some serious issues here.

OP gets some legal advice.

OP sets a trap to catch him in the act.

Finally he gets caught.

OP flies back to Italy and while the cousin spends his second year in jail.

Okay, this was hilarious not gonna lie. Like, who would steal an underwear and why? It’s an extremely private thing and the whole idea of wearing someone else’s undergarments is gross. It’s just like using someone else’s toothbrush. It simply gives us creeps. On the other hand, however, it is wrong to steal as it is. If you really need something, you can always ask for it. Your cousins won’t say no to you. In fact, they would understand your needs and try their best to help you with whatever they can. Just don’t steal.

In this case, however, it wasn’t only stealing. The guy was a total creep. Considering that he stole her bra next explains what was going on.

Here’s what other Redditors had to say about this story. Scroll down to read what they think.

Buying a $10,000 bottle of alcohol in a third world country was a little extra tho.

If he wasn’t, he wouldn’t be in jail.

Fancy! Looks like OP isn’t the only one with ridiculously expensive baits.

What do you guys think? Did the OP do good by getting that creep behind bars or was it too much? Let us know in the comments below.