What’s better than being able to become a source of relief for humanity and animals alike, it gives you so much peace. Fostering or trying to put homeless animals up for adoption is an effort that never goes in vain, this could reward you in so many ways. There are a lot of people who are running various foster organizations that look after stray animals that can be domesticated as good pets. These organizations not only rescue stray animals but also rescue abused, abandoned, and lost pets that seriously need rehabilitation. Every animal deserves to be loved and owned by a family, hereby this deed could benefit animals as well as humans who are in need of furry babies.

Today’s storytime is about an inspirational young woman, who all by herself rescues stray cats from her area and takes them to their local shelter home to help them find a forever home. The cat population in her area has reached a limit that could pose a serious danger to the rest of the wildlife. Hereby, she uptook the responsibility, and instead of harming the cats in any way, she decided to foster them in their local shelter home. During the whole process, she received a lot of criticism from the locals who assumed she had been harming the cats, as the felines had been disappearing.

Go through the post to know, what happened next and what did she do to assure the local people that the cats were safe.

1. I’m curious to know how many cats are we talking about.

The sweet town of felines!

2. Every cat is adorable, but not all of them like getting adopted

Rescuing so many cats on your own is quite of a job. Kudos to the girl for taking them to the shelter home so they can be looked after, put up for adoption in order to be adopted by affectionate families, and be healthy and happy. All the animals deserve a chance to be well kept.

6. The story takes a turn 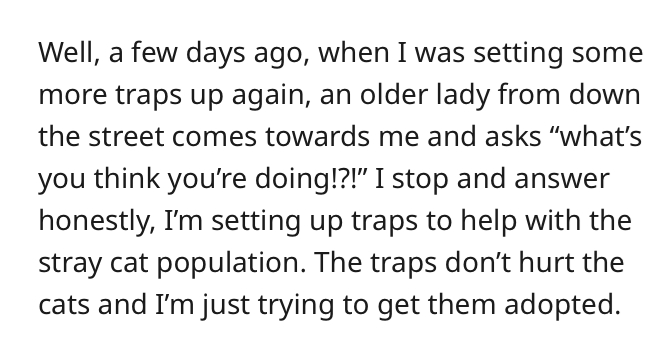 7. Poor old lady is pretty possessive about these kitties

It’s pretty considerate of OP that she decided to save the cats by taking them to the shelter, most people take animals down if there’s an overpopulation of a certain animal in the area. It’s really nice how the local people have developed a special association with the cats and are worried about them being taken away. However OP isn’t just worried about the overgrowth of the feline population, she is also worried about the rest of the smaller wildlife going extinct in the area.

8. The cats are to be looked after, right away!

9. It’s hard for her to decide which kitty is her favorite one 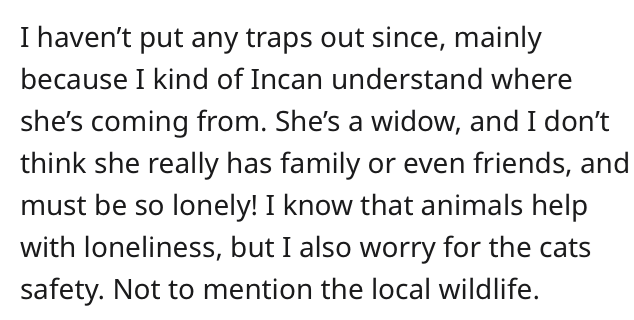 11. She ended up walking the lady home.

12. Looking at the overwhelming response to the post, OP kept the readers updated 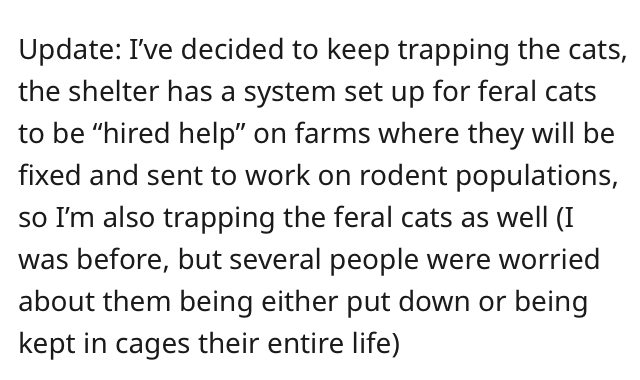 The feral kitty has a serious job to do now

13. Another admirable act of kindness by the OP.

It’s amazing how OP being so young, took this step and took the criticism positively. She didn’t give up on the kitties and tried convincing people that the cats will be safe in the shelter home. The best part was that her kind heart pushed her to stay close to the poor old lady who was all alone. Such stories are an assurance that humanity is still alive.  Empathy is God’s greatest gift and it can win a hundred hearts and be your guide in the darkest hours. This sure was a story that moved us all!

What are your thoughts about this act? do let us know by making a comment.