There’s no shortage of entitled people out there on the internet and in the real world, whether I’m referring to people who think you owe them their time just because they said hi, or because someone is trying to get you to give them something at a discount (or even free) that you’re trying to sell. I believe everyone’s dealt with some kind of entitlement issues on the internet at some point or another, but I am confident that most of you have never run into the kind of man a redditor by the name Stooby2 ran into.

This one subreddit, called r/ChoosingBeggars, is dedicated to events and stories revolving people who are picky and choosy despite being beggars. As in, they want some of your stuff, and when you try to offer them something, they want the more expensive thing, or just want more of it. The sub doesn’t apply to people who need the items in question, because those people need help, not mockery. This all started for Stooby2 when he tried to give away a table. 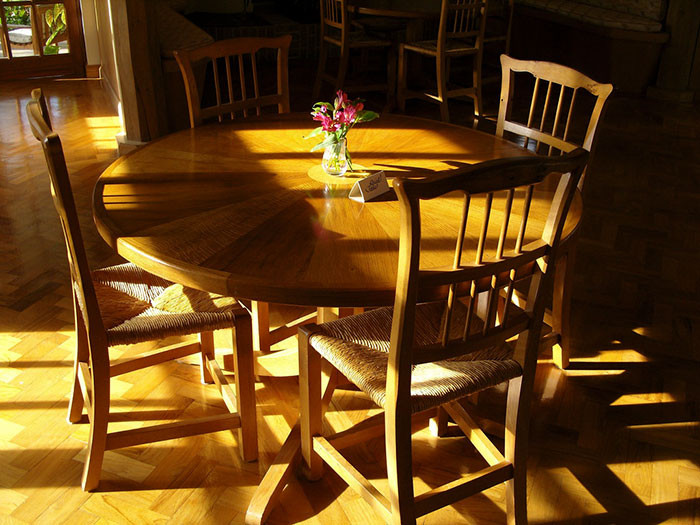 The comments are all dunking on the person in question.

Funny how in their mind they must be thinking, well these people are ready to give a table away, so maybe they’ll give their own away instead of the old one… because I have company this Christmas. How can you be so narrowly focused on your own perspective?

#2 A friend of Stooby got him in touch 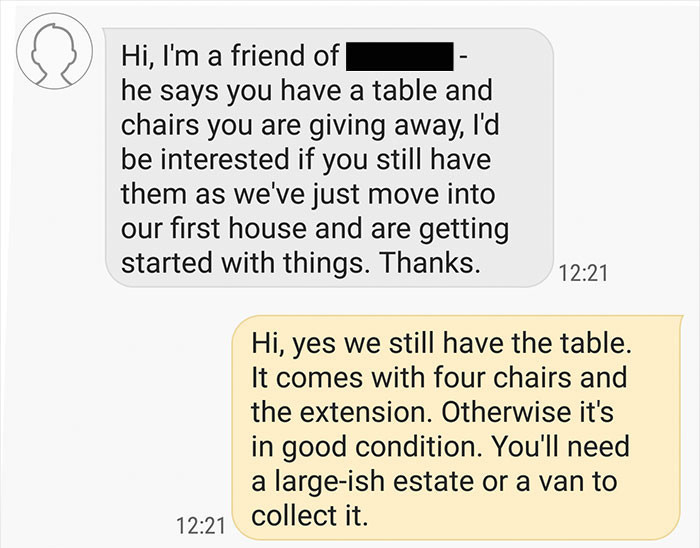 #3 They wanted six, not four 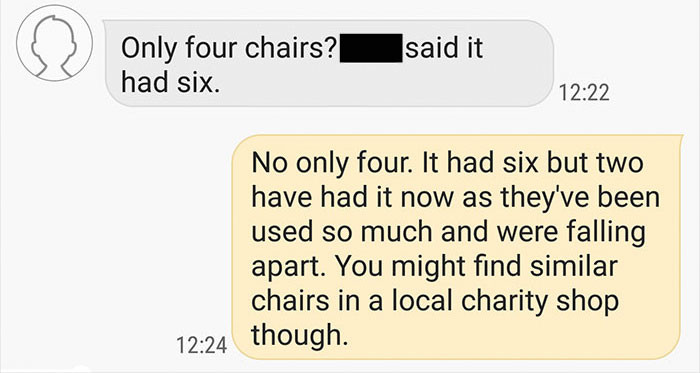 #4 Instead of the old table, they want the new one 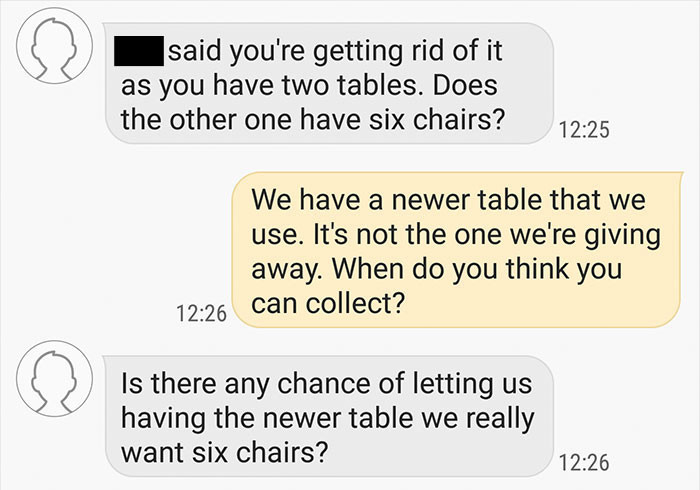 #5 A bit cheeky but can you deliver? 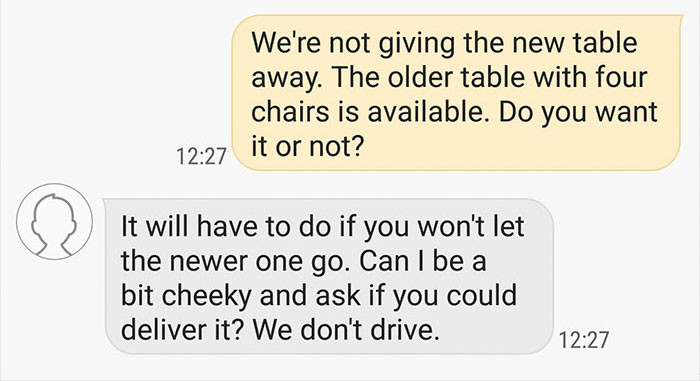 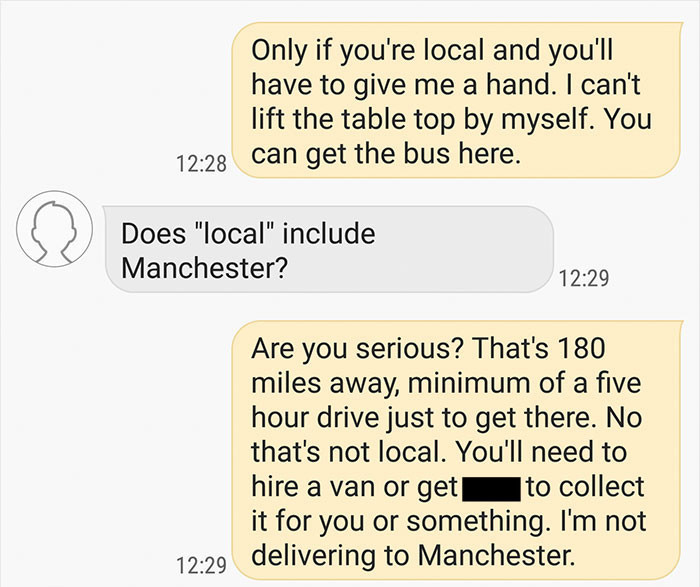 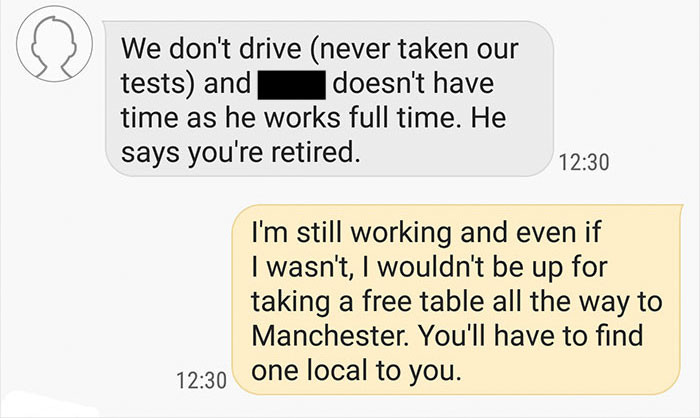 #8 And then the begging started 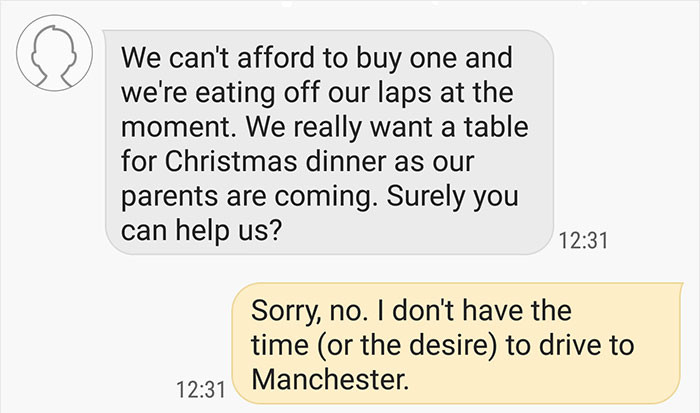 #9 Before the profanity, of course 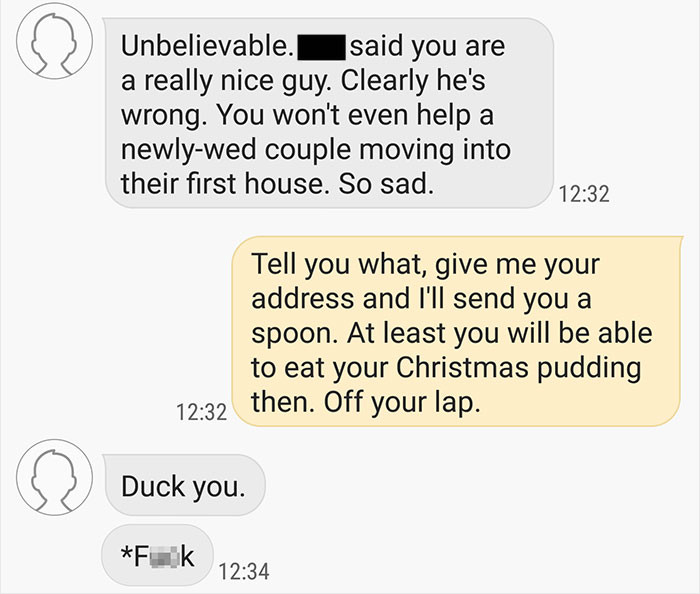 You know, I almost wish someone I know personally would be this much of an asshat, just so I could tell them off. I feel like it would be cathartic for me. And when I’m done, and they’ve been suitably cowed, I would assign them homework, i.e. spending a couple hours on this sub just to see what the rest of the world thinks of people like them.

I might need to take a break from this sub.

#10 The comments were full of assistance

Unfortunately, they won’t get it. I had a close friend who tried using me as part of her choosy begginess, and when I called her out on how rude it was, and how I was dismayed that she’d drag me into that, she just changed the subject.

#11 And this really went viral

Seriously. This is my point. People who behave like children deserve to be treated like children, up to and including lecturing them continuously until they get it (or throw a temper tantrum, more likely, but that pretty effectively proves the point.)

#12 I hope the texter sees this at some point

As soon as I read “suitably cowed” I was like haha no that’s not how it works.

People act how they feel is reasonable. If you’re being reasonable and someone tries to tell you off for it, they’re an asshole right?

Well, that’s how we end up with people like this. Not everyone is like that, obviously, but no one wakes up like “hmm I’m going to do the wrong thing and be an unreasonable prick!” Including people who do exactly that.

#13 The audacity is unbelievable

Which is why it’s so important to cultivate self awareness and self-honesty.

It starts with acknowledging that sometimes, despite intentions, we’re all assholes in someone’s story. Maybe you had to merge last minute to make an unfamiliar exit, maybe you didn’t realize the tables were self-bus, maybe you were about to shit your fucking pants so went through a yellow light you knew would turn red a little too soon. All simultaneously justifiable and dick moves, depending on your perspective.

#14 There was such fixation

What about you? What did you think about this? Do you think they were being entitled as heck, or not? Tell us down in the comments below either way!