One of the essential aspects of an ideal residential area would be a nice peaceful neighbourhood. That is on the top of the list for every sane person. No one likes to live in a place where there’s noise and chaos. ‘Nice neighbourhood’ is a term we usually hear when talking about good places to live. When you are moving to a new place, you keep note of the people around you and what a regular day looks like. You observe what you would have to deal with in your routine. If you are lucky, people living next to you will be calm people who won’t intrude on your personal space and would not try to meddle in your business. They won’t make much noise and will be polite.

On the other hand, if you have an unfortunate luck, you would have to deal with noisy and impolite people as your neighbours who would make your life a living hell. Of course, you cannot tell for sure what kind of people you are going to live with until you actually move. But if your neighbours are of the latter kind, what should you do?

In our today’s episode of Reddit’s AITA thread, we have a story about a woman who took it upon her own hands to deal with the kids in her neighbourhood who were making too much noise. But it was conflicting to figure out who was at the wrong place in this fight, so she took it online to ask people on the internet whether what she did was right or wrong and she decided to let people be the judge of it. Now, let’s go ahead and read what the fuss was about and how the people reacted to it;

Apparently, the kids were making a lot of noise and she found a way to deal with it!

Damn, that is a nice way to break a bad news to your new neighbour. Why couldn’t she just ask her kids to lower her down? It does not make to expect people to not get bothered by loud noises coming from your house. The least she could do it apologize sincerely in advance. This poor lady had not even finished unpacking and the drama has already begun.

It looks like she knows in what situations loud noises are acceptable. It is not in parent’s control when a baby is crying and no sane person would want to play loud music to disturb a newborn. And birthday parties are special occasions.

Damn, this neighbour really expected the newbie to just bear with her loud kids but got annoyed when she was told she’d have to tolerate some loud music too?

She really snapped here! And that’s how it should be done.

We totally get where she is coming from! Do you guys? I mean, her neighbour just expected her to tolerate loud noises and wouldn’t do the same in return. It’s nothing less than hypocrisy that the neighbour got offended over it.

She is being reasonable as a person can get. She is ready to let go of any regular noises that are expected when you are living with such people next to your door.

While we all do think that all parents do their best, and maybe they do, we should also agree that sometimes they are not able to discipline their children well. Maybe there is a valid reason to it and the parents are not in a good place, but the kids seem to be a little out of hand nonetheless. And in this situation, this is exactly what it seems.

Oh, here it is, guys! It is definitely the mother’s fault. The whole neighbourhood had an issue with this family. And the mother seems to be ignorant of the fact that her kids are not the best kids.

God, hope none of us get to experience this. Your house is suppose to be a safe place when you can stay in peace, not tolerate loud noises. And she had to deal with this right after she moved. She did not even get to rest from the exhuastion of shifting to a new house.

Now let’s go ahead and take a look at what people had to say about it.

And people had similar thoughts!

This person has their own list of rule for their kids. 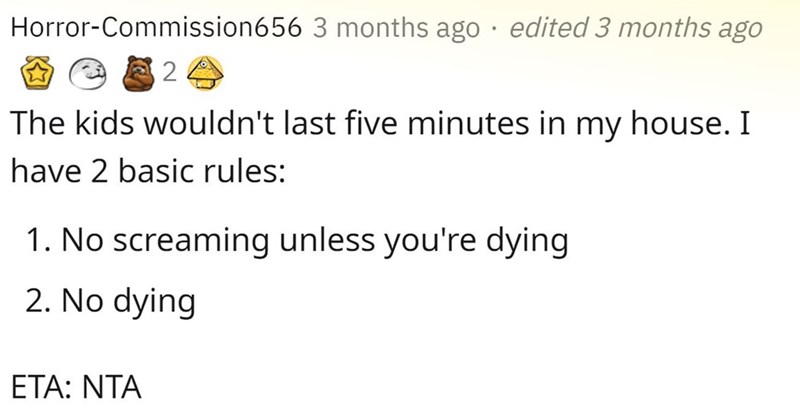 Some people have different opinions and think that this woman’s loud music would not only be a revenge for the kids but also annoy other people.

These people are in full support of the tit for tat method!

Well, what do you think of this situation, guys? Well, in our opinion, this woman is being completely reasonable. She was not rude and did not even call the authorities against her. She tried to negotiate reasonably but the neighbour was expecting to step over her without being called out. If you expect your neighbour to put up with your family’s mess, then you shoud also bear with how they decide to deal with it.

Imagine, you’re sitting peacefully trying to focus on your work as the pandemic has confined people to their homes and you simply can’t focus because the neighbour’s kids wouldn’t shut up? It won’t only cause you mental stress but will also affect your work (if you are working from home). A majority of the people would let it go by saying that “kids are like that”, but they are wrong. Whether you’re having noisy kids or even pets, it is your sole responsibility to guide them to stop being noisy as the entire community is at stake.

Anyways, last but not the least, we would love to know your thoughts on this situation! I think every reasonable person would agree that if you face a certain situation like this, you simply can’t just sit there and let things unfold unless you decide to step up! However, have you ever been in similar situations with your neighbours? Feel free to use the comments section below.