The relationship of loyalty between humans and dogs works both ways.

It is a very well-known fact dog are one of the most loyal animals to grace the face of this planet. Once their human adopts them and promises to give them the best life possible, the dogs also make a promise to be the best companions to their humans. So that shows us that this relationship is not one-sided. Both parties are equally loyal when it comes to building this relationship into something everlasting. This theory was proved by a 65-year old woman who was homeless and was one day trying to fit into a black plastic bag in order to hide from the rain and the cold weather that it had brought along, on the streets of Tijuana, Mexico. It turned out that the black plastic bag wasn’t a shelter just for the homeless woman, named Luz Maria Olmedo Beltran, but was also a room for 6 dogs who she had been living with and taking care of. Luz had been living on the streets for over 8 years now and even though things haven’t really improved for her in all those years, the health and well-being of those dogs remain her top priority. That bond, once formed, is very hard to break. It’s a give-and-take relationship, they protect her and provide her with a sense of companionship and she takes care of them and makes sure to give them a happy life.

Omar Camarillo, an amazing photographer captured this scene and shared it on the internet. The story went viral and definitely touched many hearts.

Scroll down below to read this strong woman’s emotional story! Disclaimer: You might not be able to hold back those tears.

This is Luz. She has been living homeless on the streets for many years with these dogs and they take shelter in this black garbage bag. 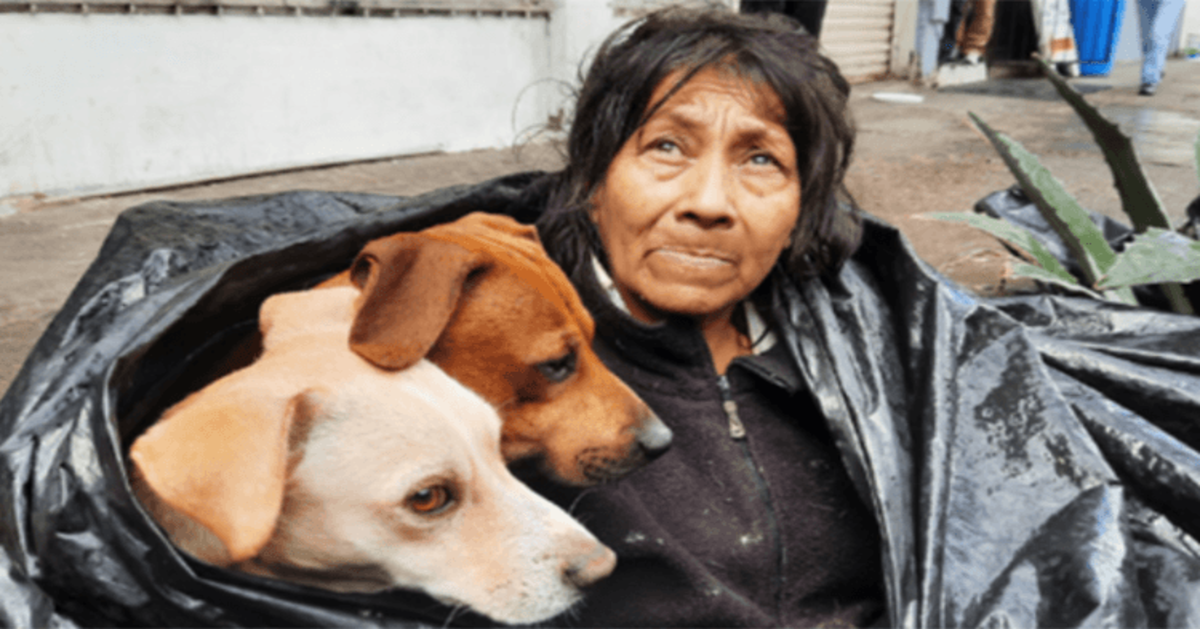 The local police in Tijuana found Luz in hopes to help her out. The police wanted to take her out of this bad situation and transfer her to a shelter.

The local police officers kept trying for over half an hour to convince her to go to the shelter and start a new life, but she would keep on refusing all offers. 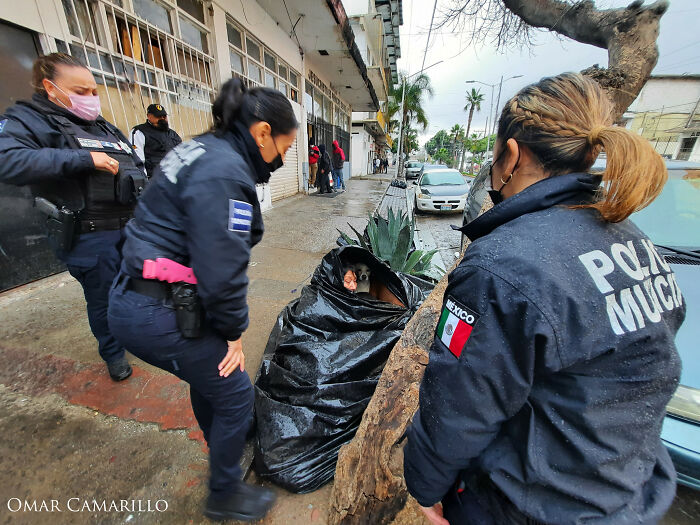 The police were very desperate to help and tried their level best and upon being constantly asked to get out of the bag and move to the shelter, Luz started crying loudly. The reason for the crying wasn’t fear or anxiety. It was something deeper, something very emotional.

Upon being constantly asked to move to a shelter, Luz started crying because she didn’t want to leave her loyal dogs behind. 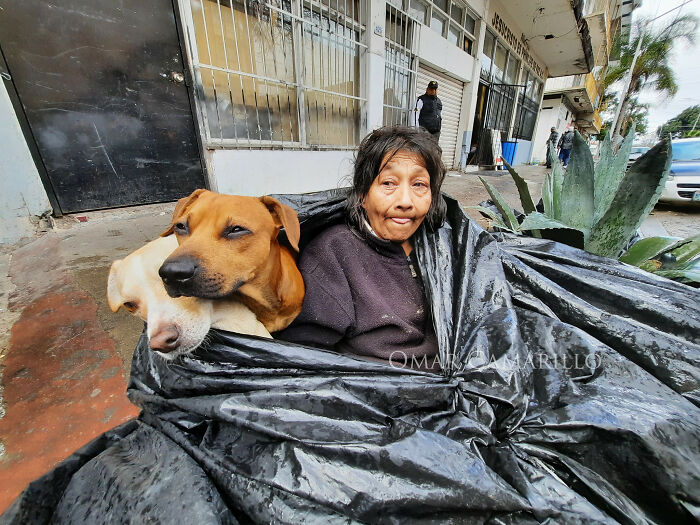 How could she? Those six dogs were her companions and they were always together through thick and thins of life. That is not how you suddenly break a bond and walk out of it, it would’ve broken the dogs, and imagine the impression it would’ve left of Luz on their hearts. It would’ve been impossible for those dos to trust a human again.

The main reason why Luz decided to stay with the dogs was that the shelter did not allow animals and she simply couldn’t live a life without her dogs. 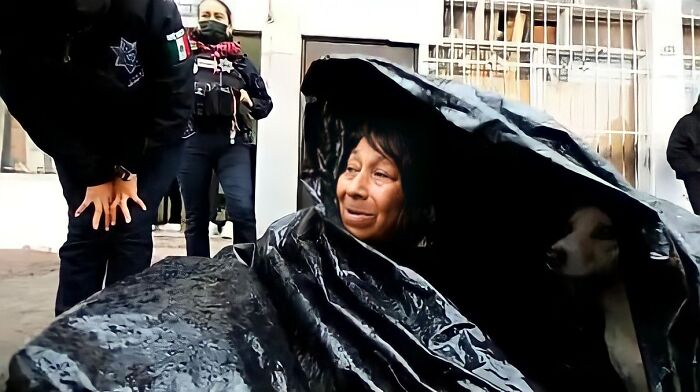 As anyone would feel after a multiple-year-long strong relationship, Lu had a strong fear that leaving her dogs alone would mean exposing them to the dangers of the world. Even though she was a weak woman, she acted like a mother-figure t them. They both protect each other and perhaps might not be able to survive without each other. She just couldn’t think of a reality where she abandoned those 6 loyal cuties.

She just looks so much at peace with her dogs. 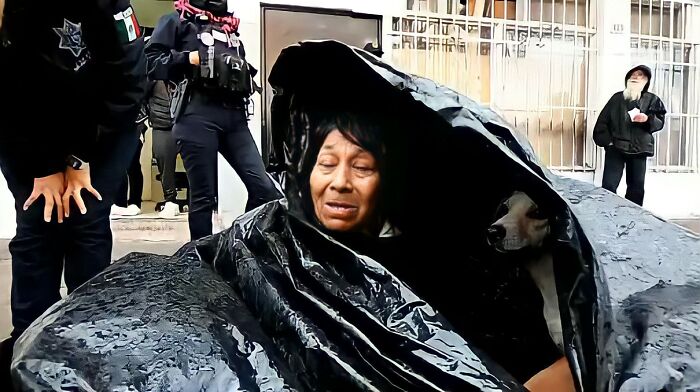 But you have to consider the fact that the police were there for a reason and couldn’t just go away without doing anything for the woman. The policy continued to convince Luz because the weather was getting colder and the rain wasn’t stopping, it was important to get her to a shelter.

And they finally managed to convince her as she agreed to stay one night in the shelter. 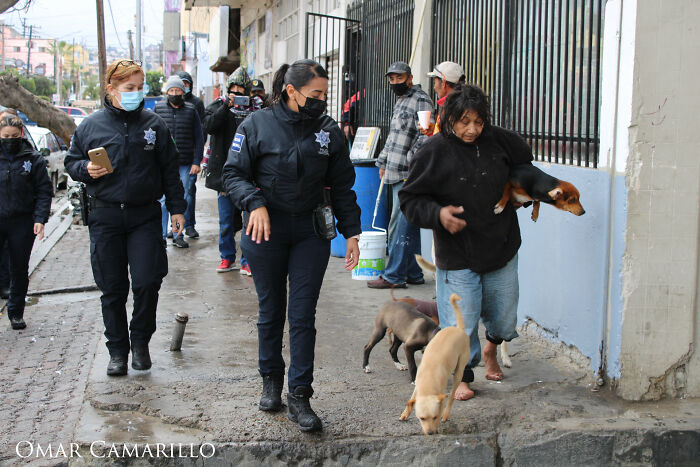 Luz spent that night at her son’s house and just as the sun rose up, she left and was back on the streets, with her dogs. 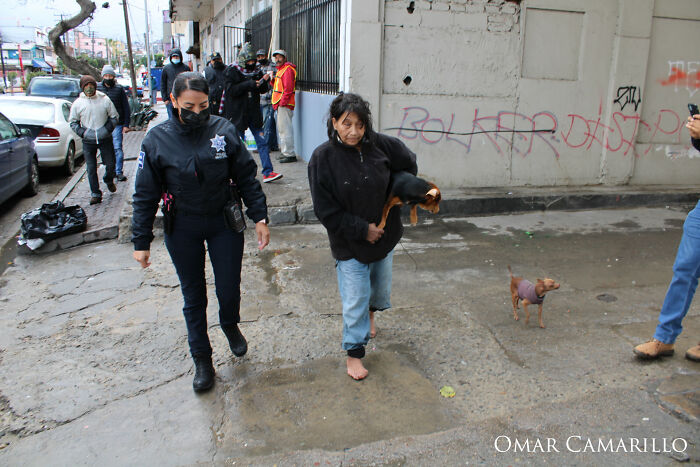 Thanks to Omar’s story going viral, God sent blessings to Luz’s way in the shape of a local woman who read her story and was very heartbroken.

A local woman after reading Luz’s story decided she has to help her out. 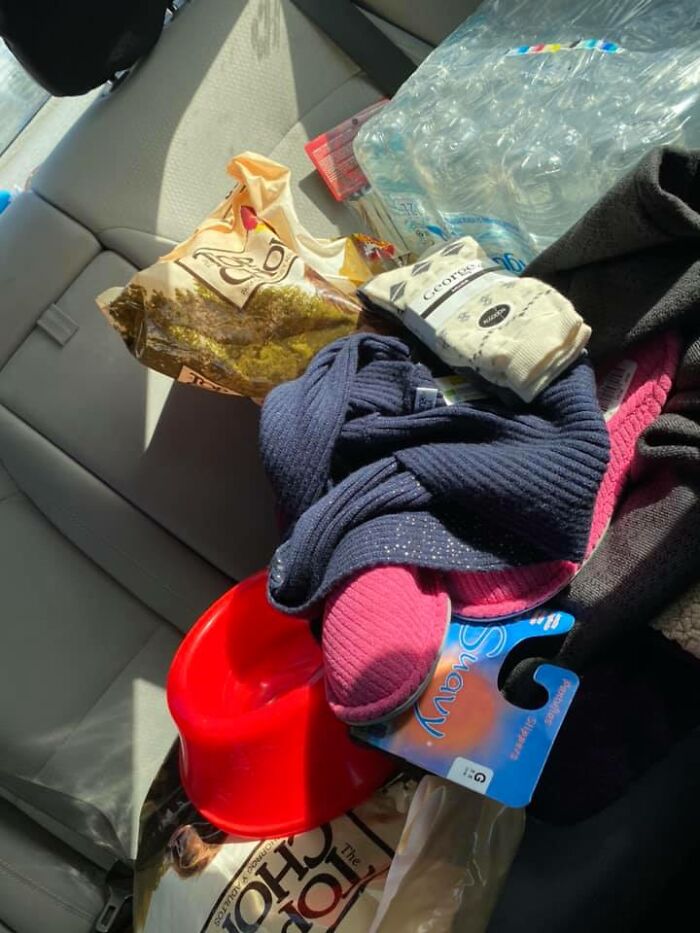 Alejandra Cordova Castro just couldn’t contain herself when she read Luz’s touching story. The level of loyalty that she showed towards her dogs and the brave decision to not leave them alone at any cost really did bring her to tears. She decided to help them in any way possible and do her part.

Alejandra bought food, clothes, socks, water, and some more supplies, loaded them up, and went to give them to Luz. 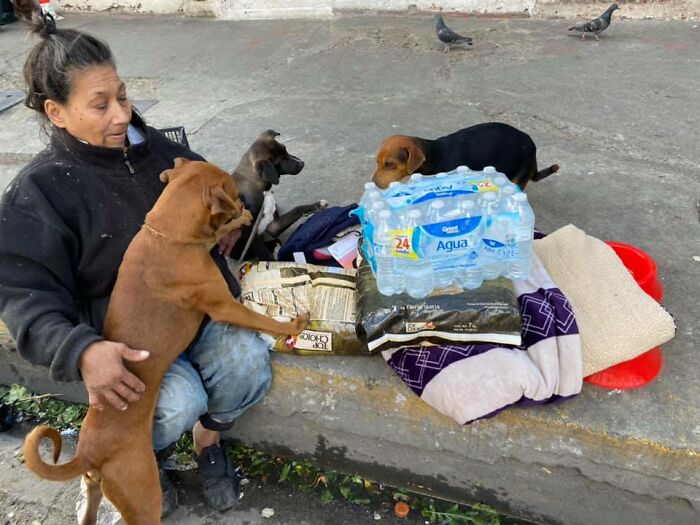 Alejandra didn’t stop there. Watching the pure and innocent smiles on Luz and her’s dogs’ faces, she decided to use the power of the internet in hopes to make matters better for the 65-year-old homeless woman and her 6 loyal dogs.

Alejandra posted about Luz on her Facebook as well and encouraged everyone who came across her post to do something for Luz. She stated her location and hoped for things to work out well. 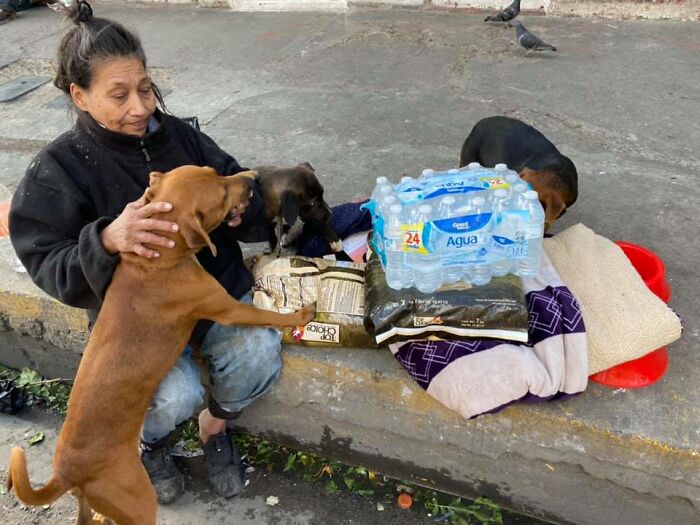 Thanks to Omar’s and Alejandra’s posts making the right impact, Luz was finally taken to a shelter, and that too under her own conditions.

The shelter wasn’t a nice one but she was making 50 pesos a day and the best part, she was living there with her 6 dogs. 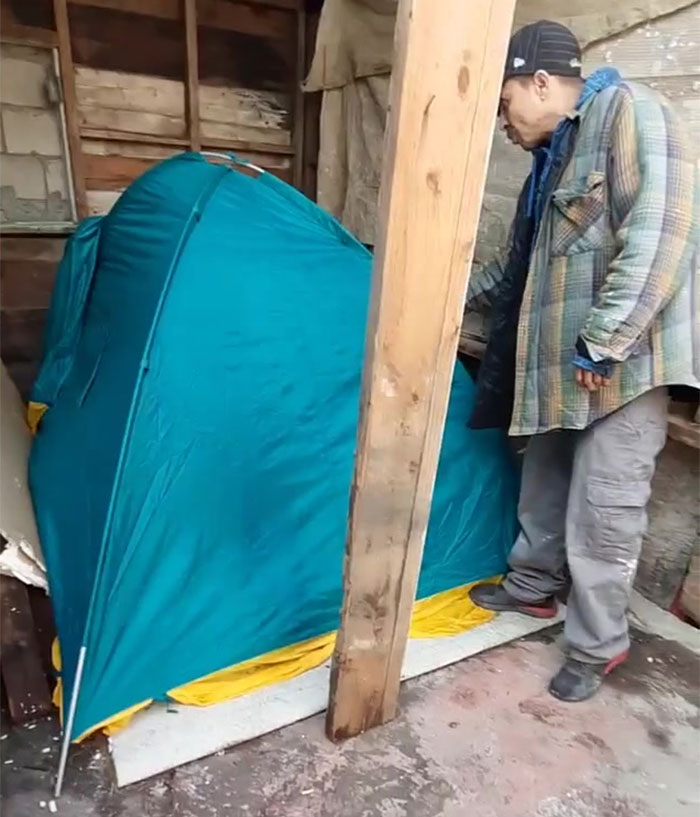 I am extremely happy for Luz and more so, I am very inspired by her. Yes, no one wants to live a life like the one she lived for 8 years but her commitment, loyalty, and companionship levels did not move an inch. She stood right in her tracks and refused to leave her babies. Her patience turned out great for her. She is now at a shelter together with her dog.

I hope we all have a kind and caring personality like that of Luz. We wish her the best in future endeavors. 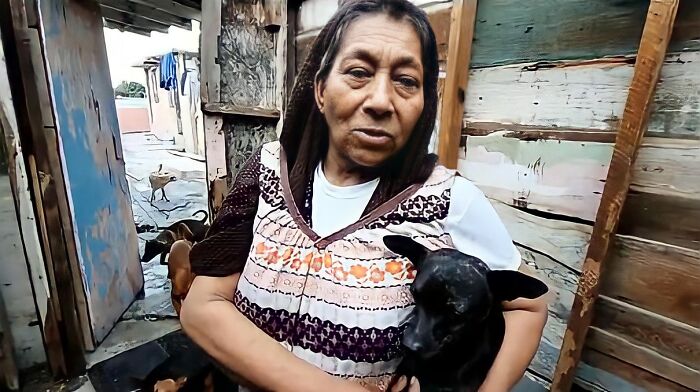 She looks very happy to be where she is and that’s how one’s approach to life should be. 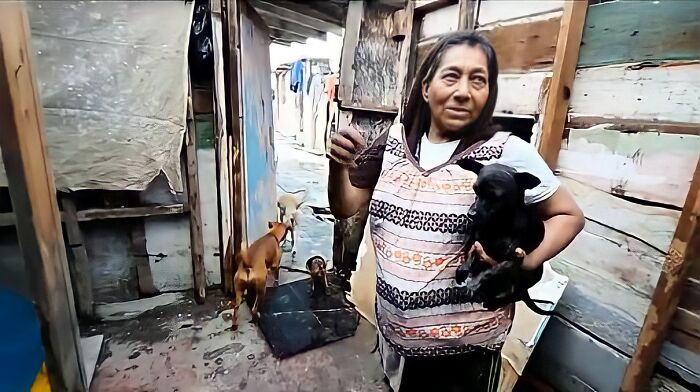 What is your take on this story? Try not to hold back and let those emotions do the typing.

Share your thoughts in the comments section down below. I hope you guys enjoyed it.