Every pet owner treats their beloved pets like they are their own children, they do everything in their will to provide them with the best life that they deserve and to bring them all the happiness of the world. They want their pets to enjoy their life to the fullest like us humans do and try all the good things in the world as their humans do. Keeping that thought in mind a guy was feeding his dog by grating cheese directly into his mouth and was caught by his girlfriend who later shared her experience on Twitter which had people dying of laughter.

It is not every day that we hear something unusual like this and I can only imagine what would be the reaction of that woman when she caught her boyfriend grating cheese into the dog’s mouth. The image popping in my mind is so funny but definitely not half as hilarious as the real situation would have been. The people of Twitter had their own amazing rendition of this situation which made the whole story even funnier and we thought it is the best content to provide you with to make your day a little brighter and less stressful. Keep on scrolling down below…

1. I wonder how I would react if this happened to me. I would probably laugh first and then grate some cheese in my mouth as well.

2. Ops, I did not think about that. I feel bad for whoever is going to clean that mess.

3. Not going to lie, It would be such a cute sight. I can imagine.

4. In my defense, I agree with whatever she said. Indeed, he is an extremely good boy, he deserves to eat cheese because it is the best thing in the world and I would, too, definitely grate cheese into his mouth again! 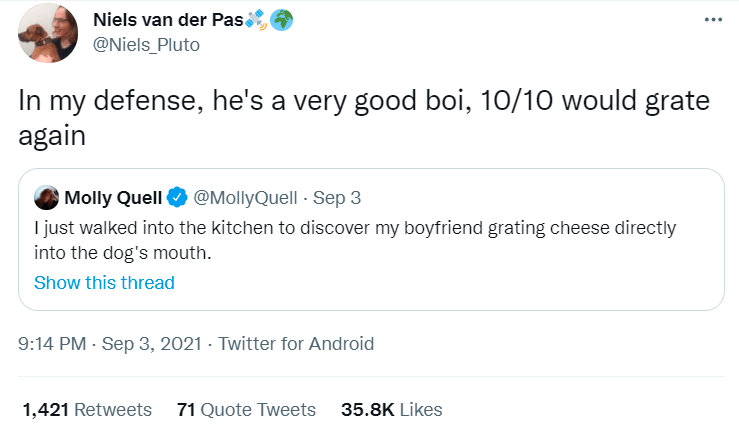 5. Molly is absolutely surprised by what the people had to say.

6. Oh, my God! This is exactly how I imagined it would have happened. 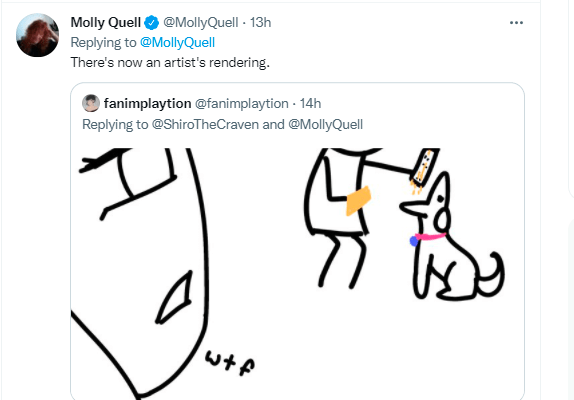 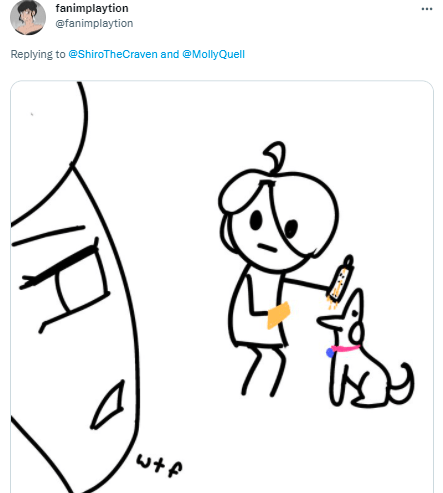 This is undoubtedly the funniest Twitter thread I have ever read, not to mention the whole hilarious story behind it. People are taking Molly’s boyfriend’s side in this situation and stating that he did a good job and they would have done the same thing for their dogs as well. I, myself, have to agree with them because I love my dog and I love cheese. Molly is really surprised by what everyone had to say, she is probably shaking her head at all of his but deep down I know she is laughing along with all of us. It is just too funny of a situation to not even let out a chuckle. Keep on scrolling down to see what people commented under Molly’s post because it might be even funnier than the real tweet…

Here is what people on Twitter had to say about this whole unusually funny and cute situation:

8. Something I would do, for real.

This is whole Twitter thread was so funny, the situation was so funny and Molly’s shocked reaction towards the people was even more hilarious. I loved everything about this post! What do you think you would do if you were in that woman’s place? Would you get mad at your boyfriend and dog for making the mess? Or would you join them and have a cheese party? I would definitely do the latter but let us know your thoughts in the comments down below…