You can never be sure of the breed of a dog when you’re rescuing it.

Every dog deserves to be loved regardless of its breed. They are just furry puppers that deserve to live in a forever home where they will be cared for. No dog deserves to be thrown on the streets on its own or be mistreated by people. They also shouldn’t have to spend all their life in a shelter just because they don’t belong to a popular breed. Usually, when people come to adopt dogs in shelters, they ask if there are any german shepherds, labradors or poodles available for adoption. What about the big doggos? Or the mixed breeds? Do they not deserve a forever home? I am sure they are capable of giving unconditional love to their owners just like any other fancy breed.

However, knowing a dog’s breed is important in the case of knowing how big or small the dog will be and also assessing its behaviour and temperament. If you live in a small apartment, you can only afford to have a little pupper that will fit right in and not cause chaos by merely moving around. Also, some dogs have specific characteristics in their breeds, so being aware of your dog’s breed can help you understand, manage, and train it. When people go to rescue shelters, they usually adopt a dog that turns out to be different from what it was labelled as. Here are a few incidents that some Reddit users shared where they rescued dogs that weren’t the breed they were labelled as:

This couple adopted a puppy when they were living in a small apartment. 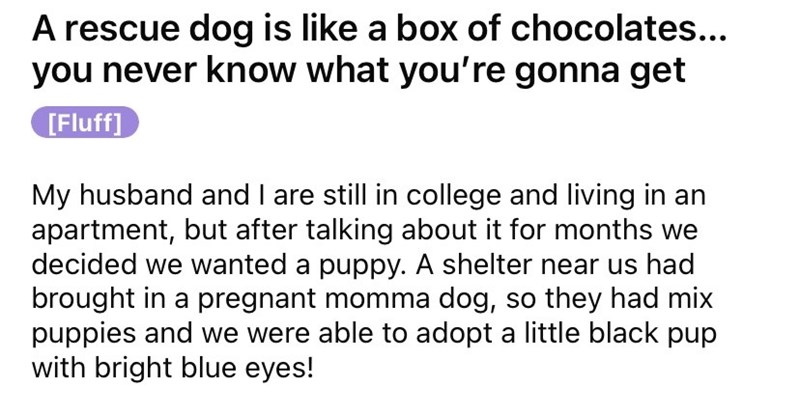 They were told that the mother was a Coonhound mix so they expected the dog to be pretty small and fit perfectly in their apartment.

4 months later, the puppy already weighed 41 lbs. It turned out after a DNA test that the dog was 48% Tan and Black Coonhound, 25% Siberian Husky, and 12% Alaskan Malamute. No wonder it turned out to be a big doggo!

The couple is very attached to the dog and is now considering upgrading to a house from the apartment.

When I was little, I rescued a dog from my community that they said was a pure golden retriever. As soon as the dog started growing up, his hair started to curl but it looked more like a labrador from his face. I still don’t know what breed he was but he was the sweetest dog ever. This is why I say breeds don’t matter because when you love your dog, it’ll give you back twice as much love as you did. And that is all that matters.

Other people shared their stories about adopting rescue dogs that didn’t turn out to be the breed they were labelled as: 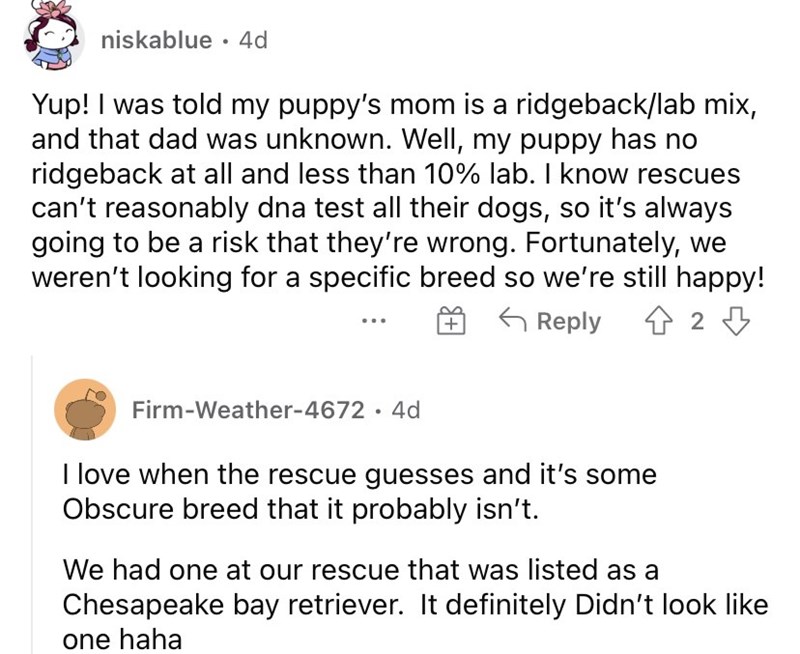 Have you ever seen or heard of a Ridgeback? They are actually pretty cool. 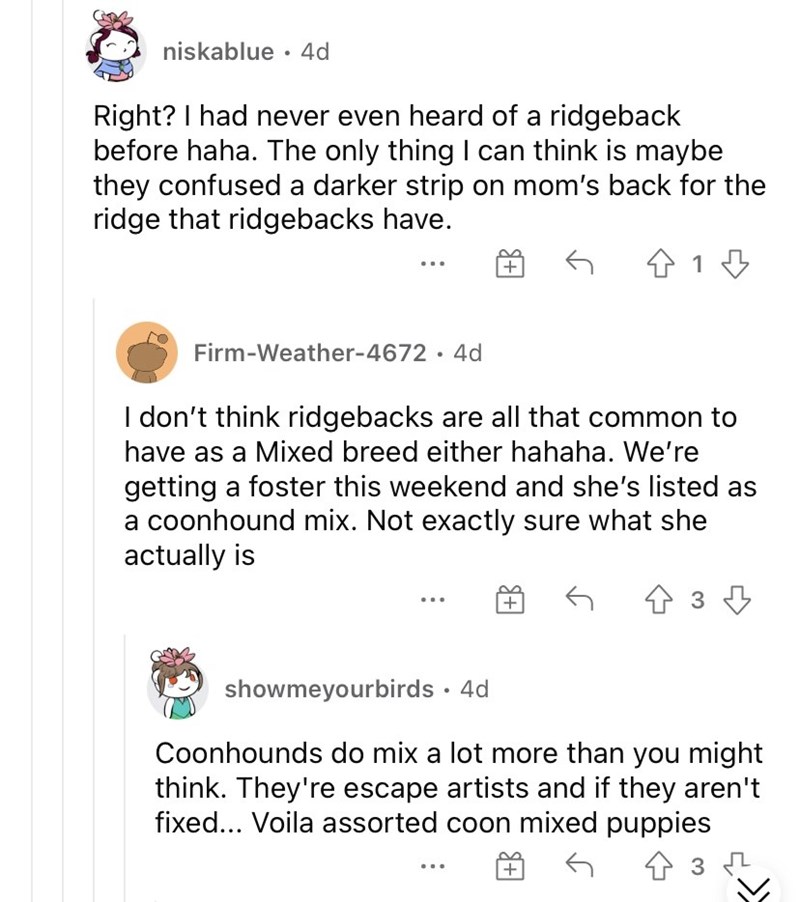 You can only guess when it comes to rescues. 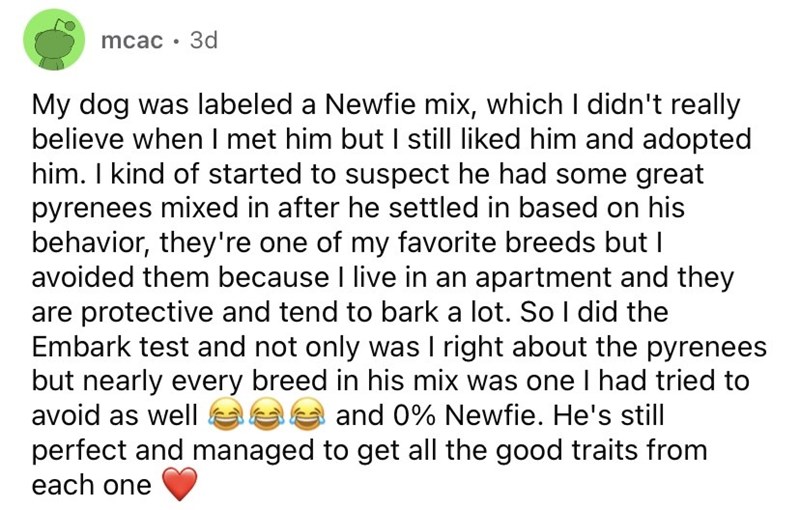 Rescue dogs are a box of chocolates and they are all delicious.

When you want a big dog but it refuses to grow. 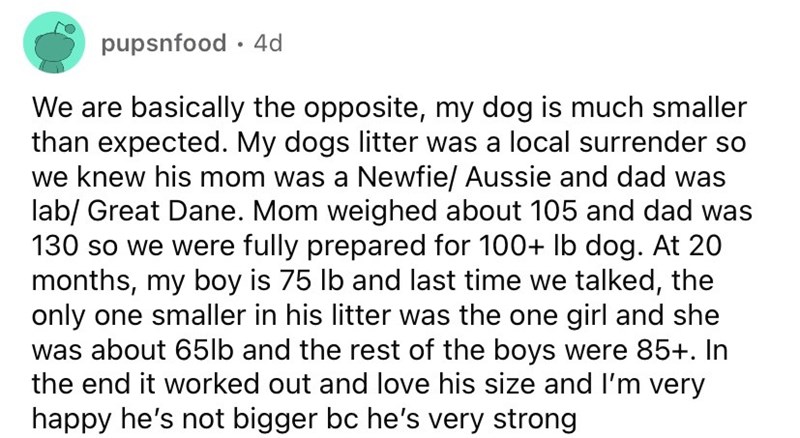 Adjusting your living space for your dog is important. 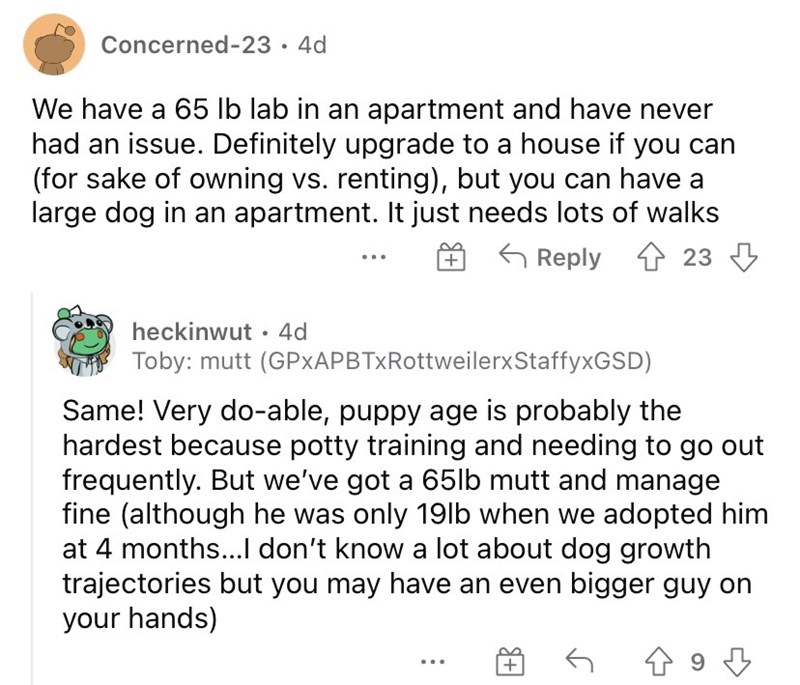 Has this ever happened to you? What breed did you end up with? Share your stories with us in the comments below.