Many of us are scared of dying. It is very hard for us to come to terms with something like that. We are not just scared of dying ourselves, but also the death of others. Those around us, our loved ones. It’s not easy to accept that one day we will all be gone or that we would have to live without someone we love. It’s one of those realities that are just too bitter to handle.

To make it a little easier for the world to cope with this, Jenny Jinya creates such wonderfully heartwrenching comics that would make anyone cry. Not because they’d be scared of dying but because of all the possibilities that are yet to come for us in the afterlife. It makes us wonder maybe, just maybe, it won’t be as bad as we think of it. Today, we have decided to share two of her beautifully created comics with you guys. Even though these comics revolve around a sensitive topic, this amazing artist has presented them in such an astounding way that it wouldn’t make you uncomfortable.

So without making you wait any longer, get your tissues ready and scroll down!

1. The old lady and the black cat

There have always been misconceptions about black cats. People seem to think of them as a bad luck. We don’t know who started this rumor and made it such a huge deal, but they did a pretty good job at making half the world hate black cats. But, the other half loves them and we stan them for that. They deserve nothing but the best. They deserve all the love! 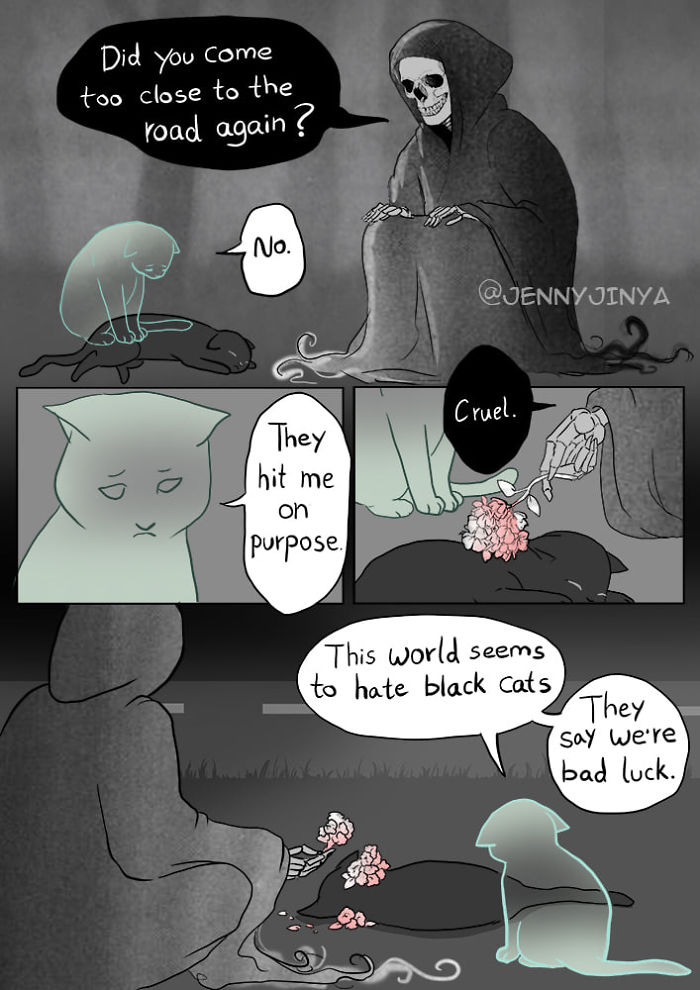 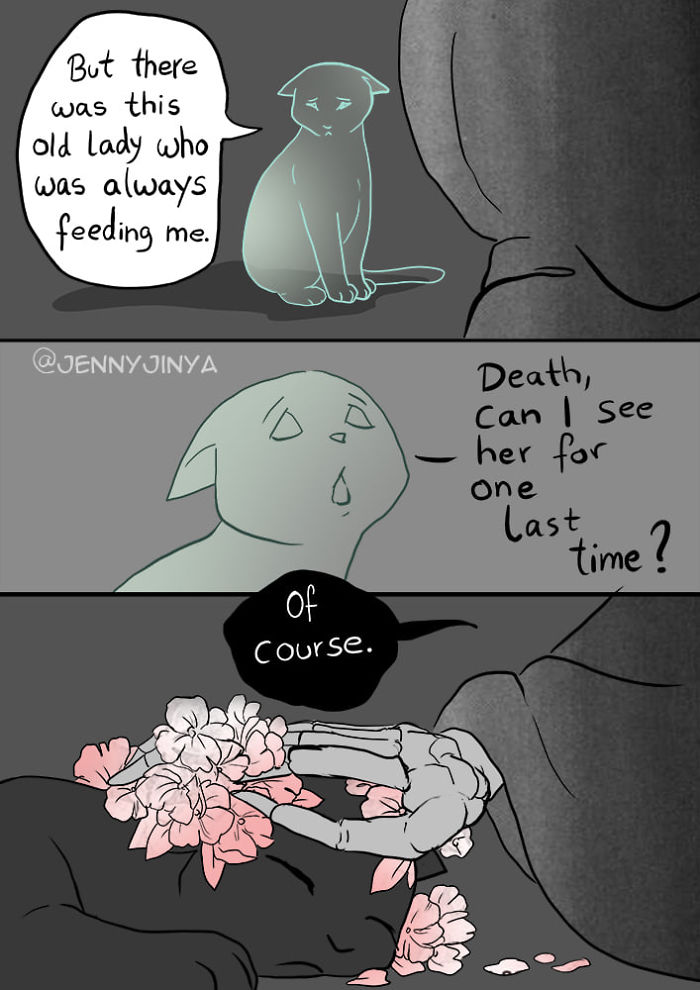 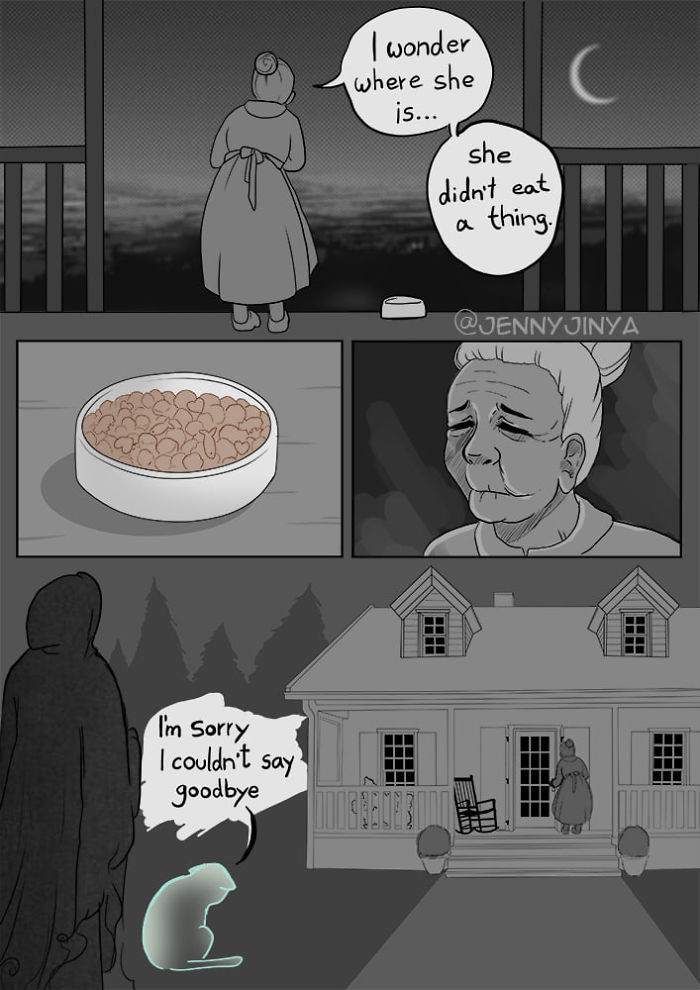 There are good artists. And then there are artists who make you feel all the emotions at once. This is the latter one and we actually just fell in love with the old lady.

Here is what Jenny had to say about black cats;

“There are dozens of posters and infographics with various statistics about abused or abandoned animals. Many know the problems, but such information is quickly forgotten,” said Jenny. “I try to give a voice to the victims with my sad drawings. I want the affected pet animals to be able to tell their own stories. I hope I can raise awareness this way.”

According to Jenny, it’s hard for her to decide whether death is a new beginning or a state. “Who knows. I’m not the one to answer that. But I like to imagine death as a person who is just doing their job. People hate them for what they’re doing, but in the end, someone has to do it. I like to imagine Death to be a gentle and insightful being.”

One of the most disappointing things ever is when humans abandon their pets as if it’s not even a living being. And what do pets do in return? Wait for them, right at the same spot that their humans left them. They wait, they hope, they starve, and they get sad. We can’t even imagine the sadness that they might be facing. These are the same pets who would wag their tails or come to the door as soon as you enter home. Give you cuddles and all their love. Yet, some of us just don’t value that enough. 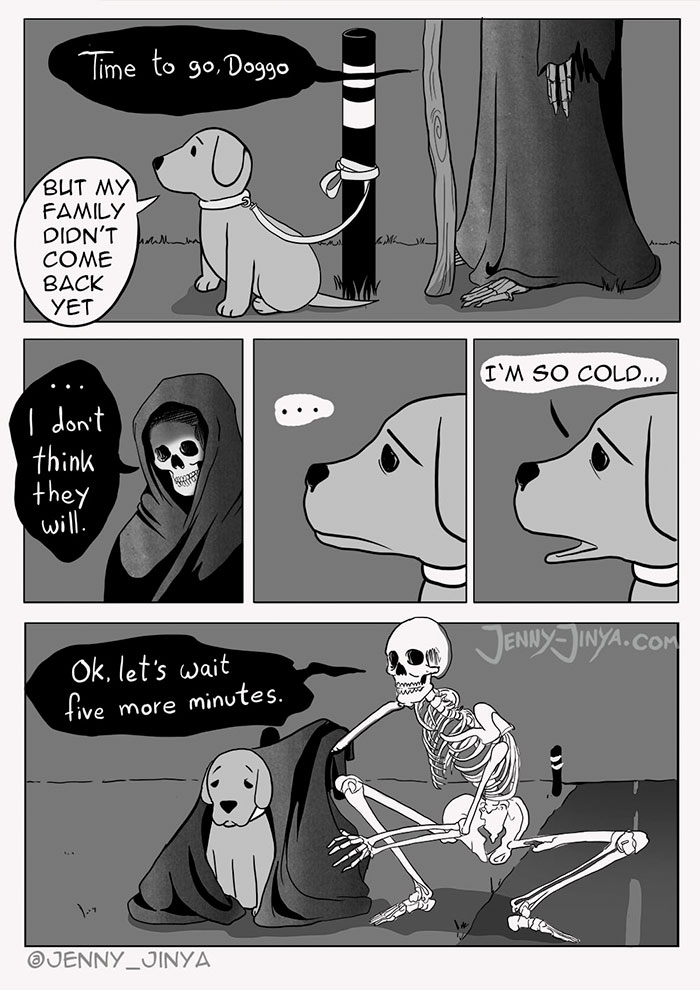 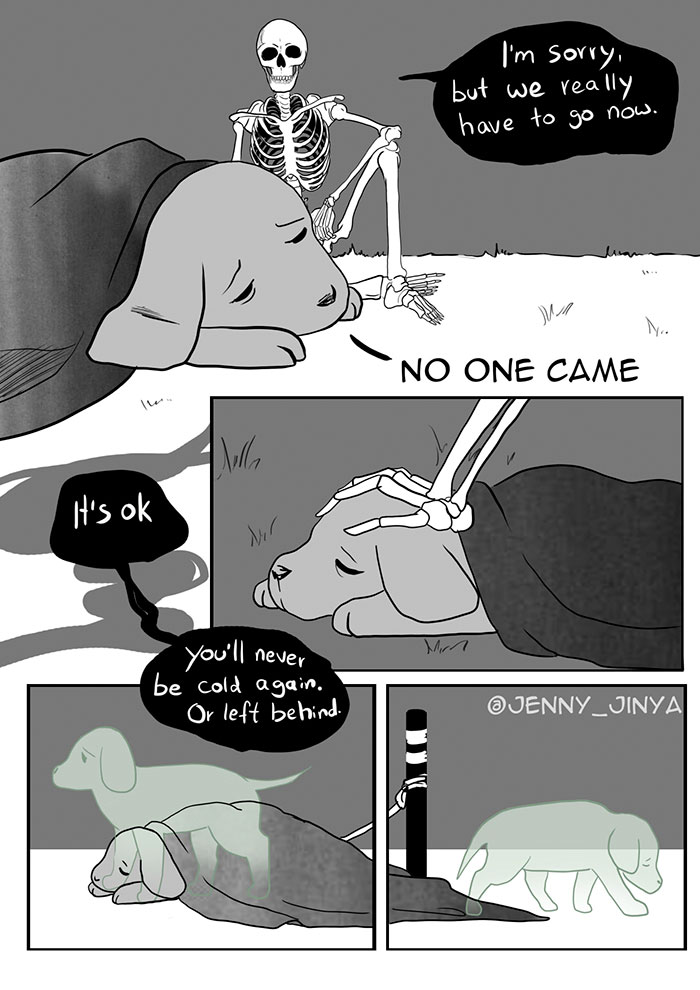 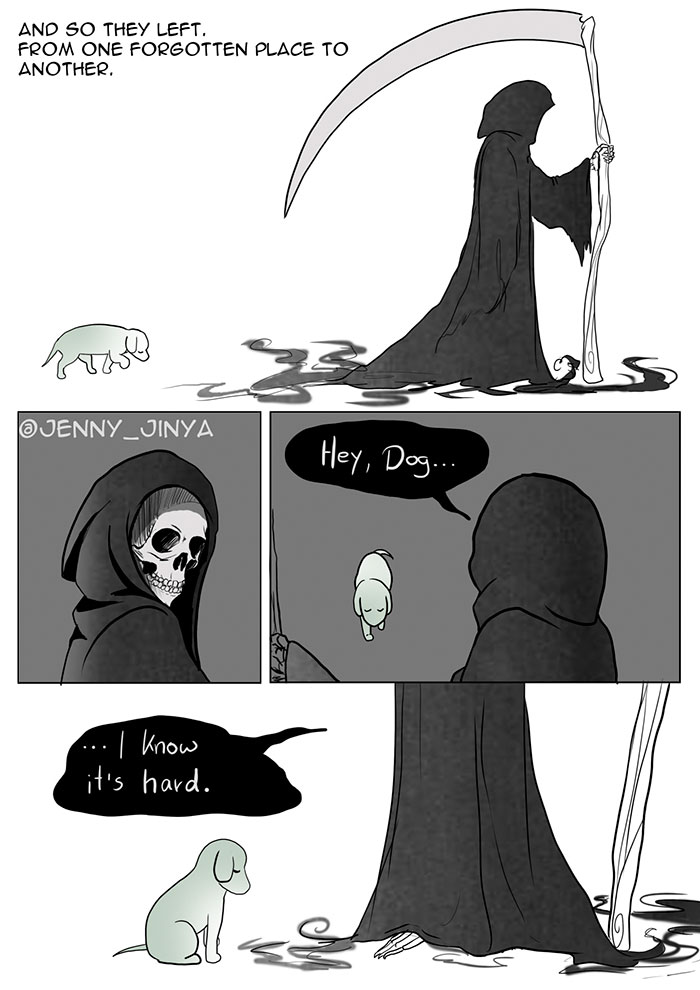 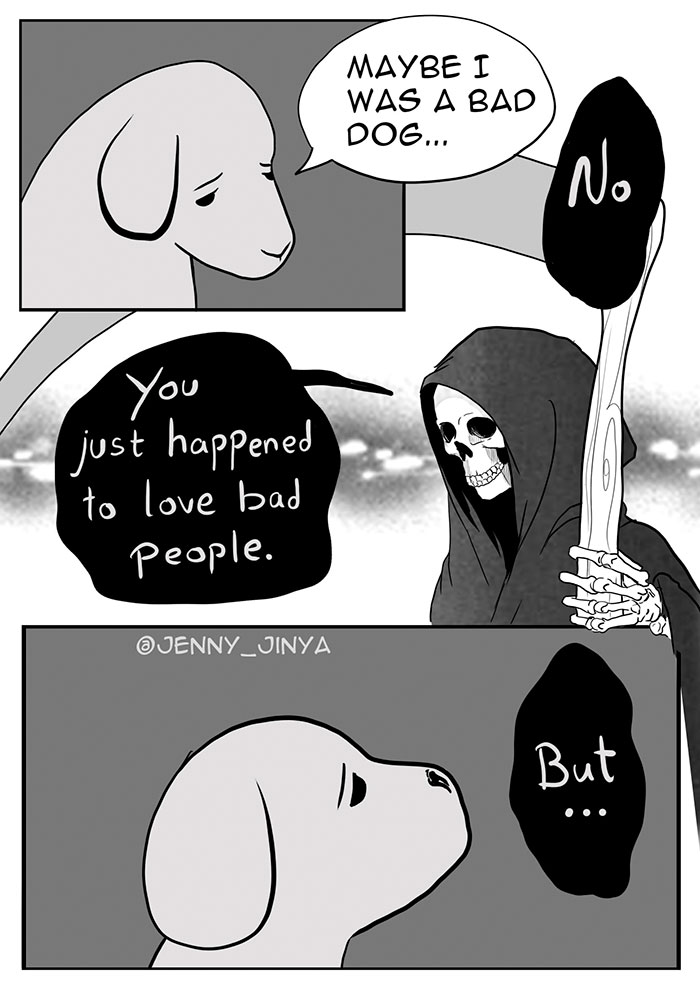 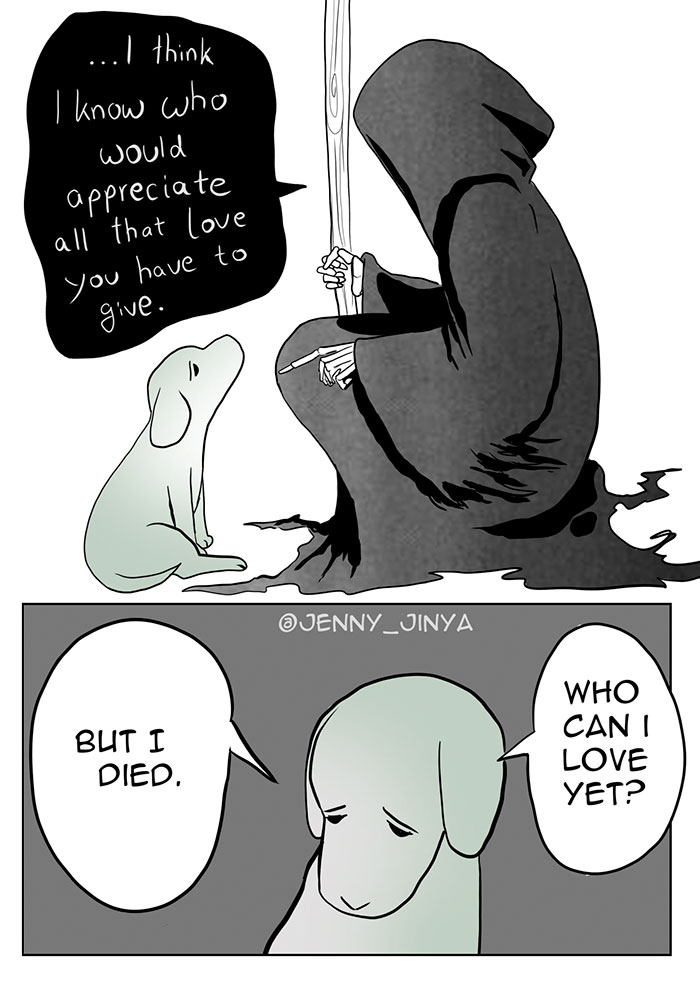 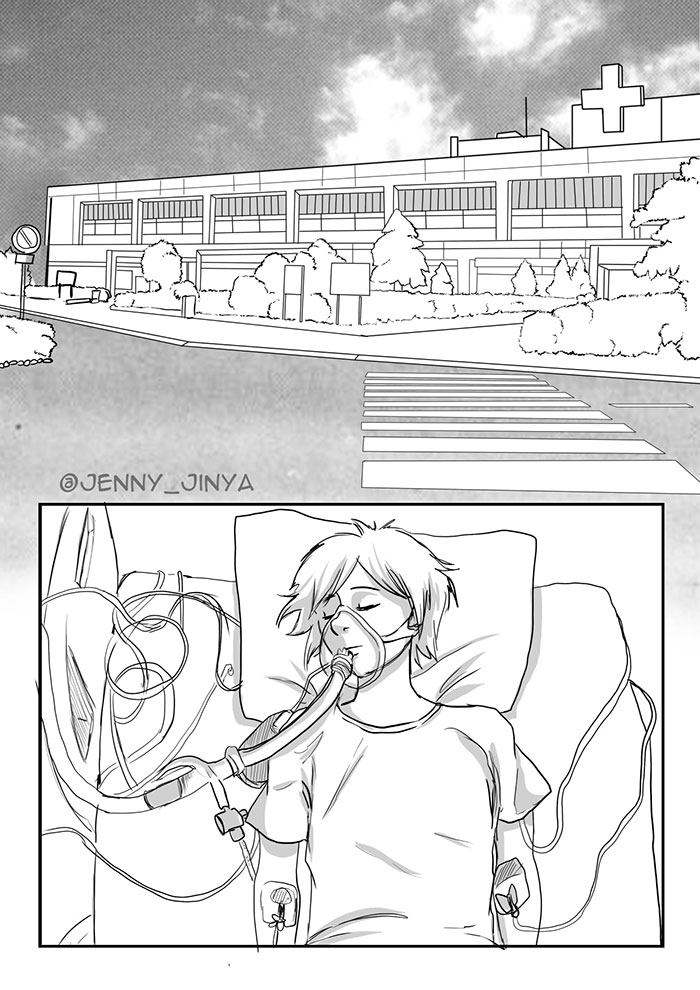 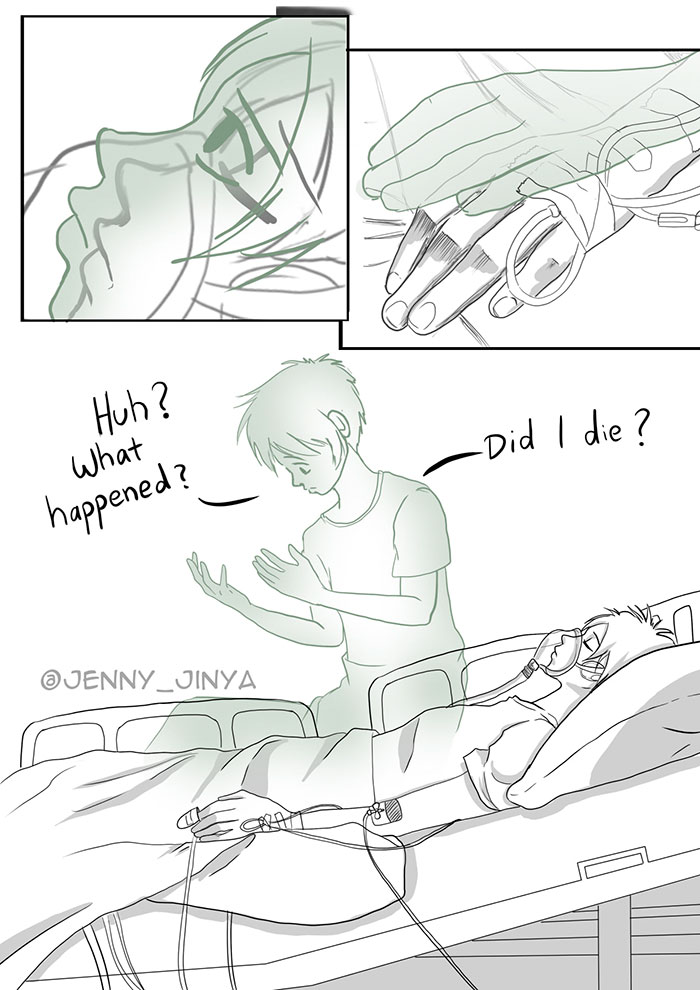 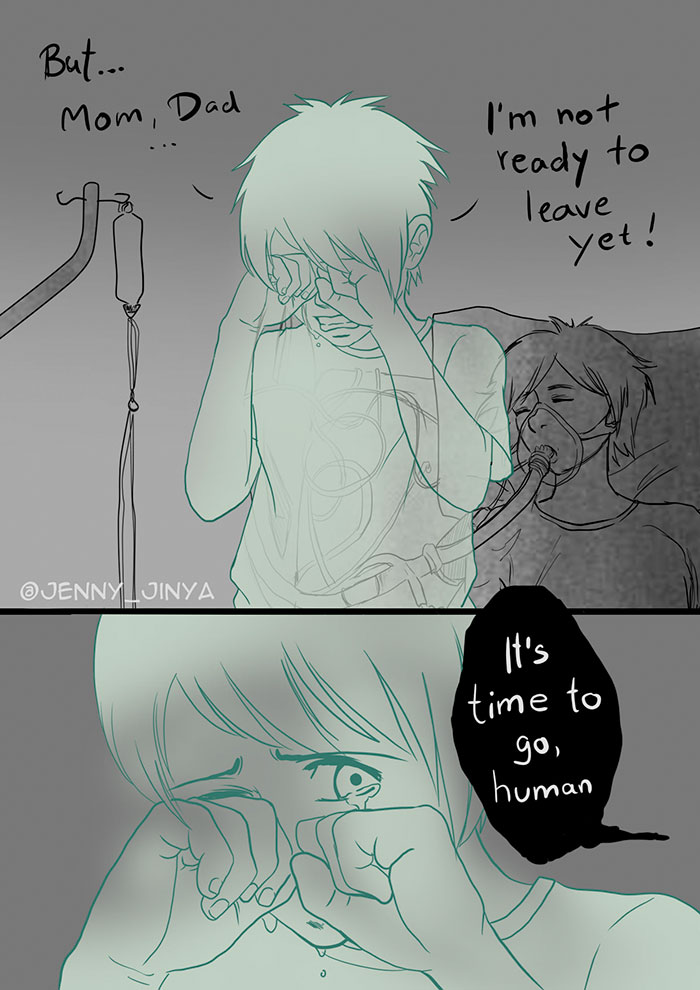 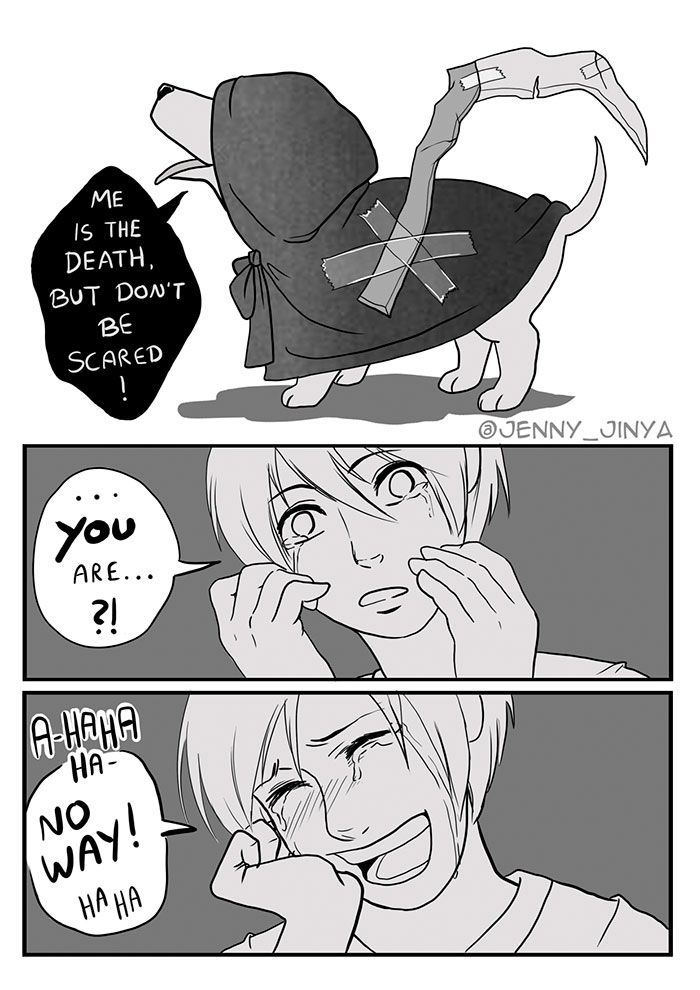 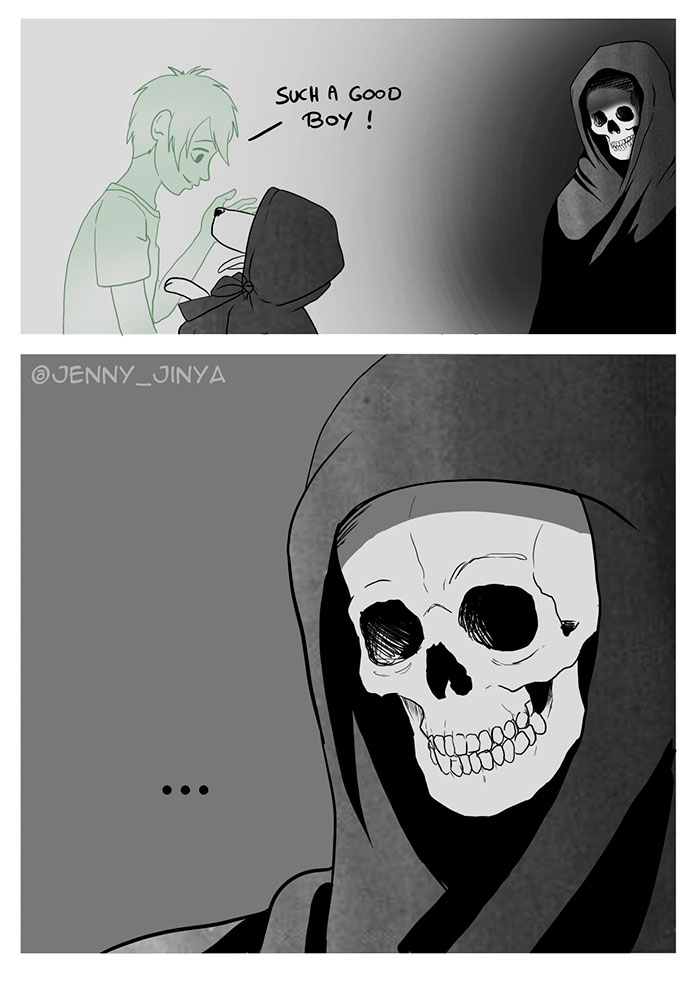 We are glad that even after death, they have found each other. The companions meant to be together. If this is how death works, I am happy to go!

Here is how Jenny concluded;

“For all I know, we could be part of the biggest MMORPG in the whole universe, but there’s no way of knowing it…. Now go and hug your pet!”

After her first comic about the black cat, people wanted to share their stories. Check them out! 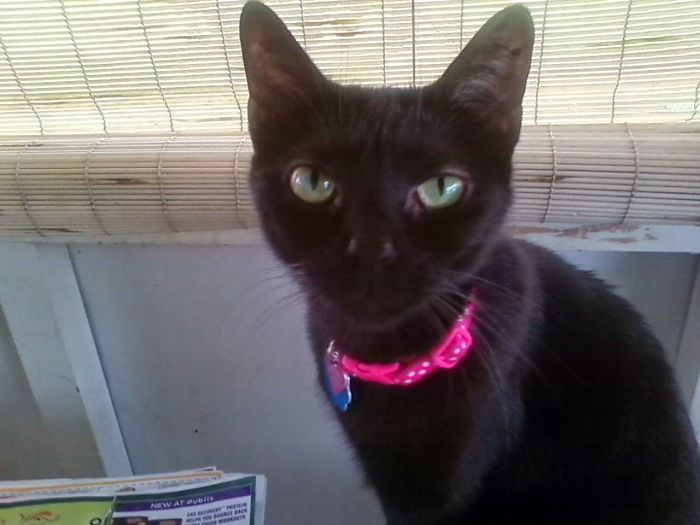 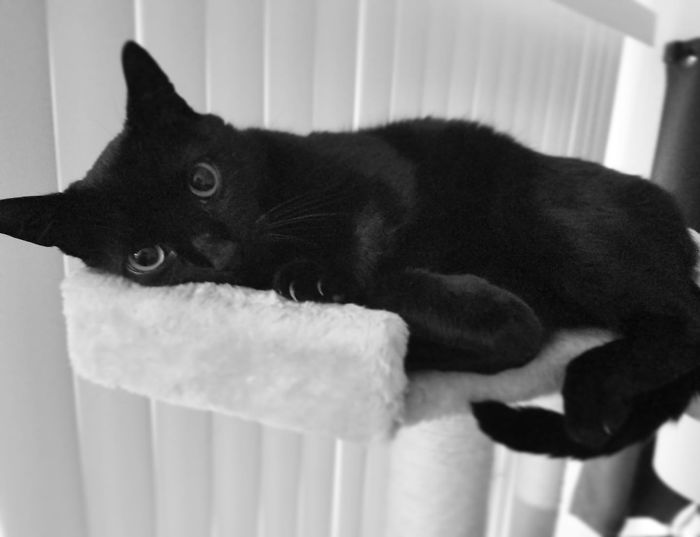 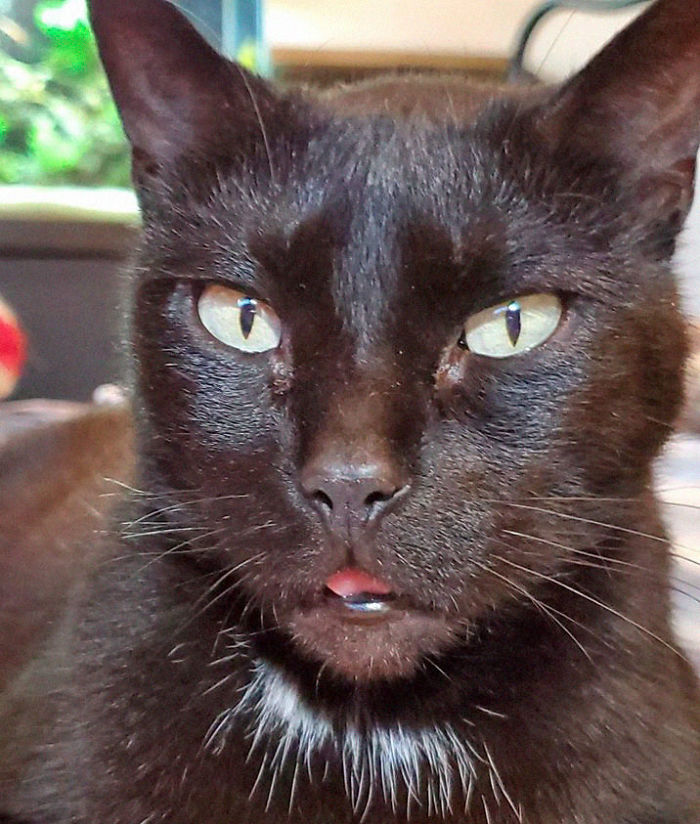 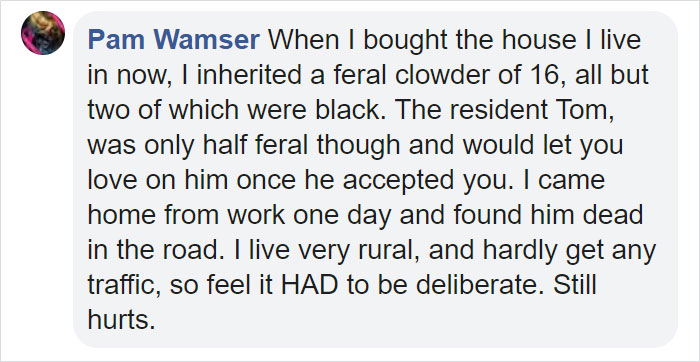 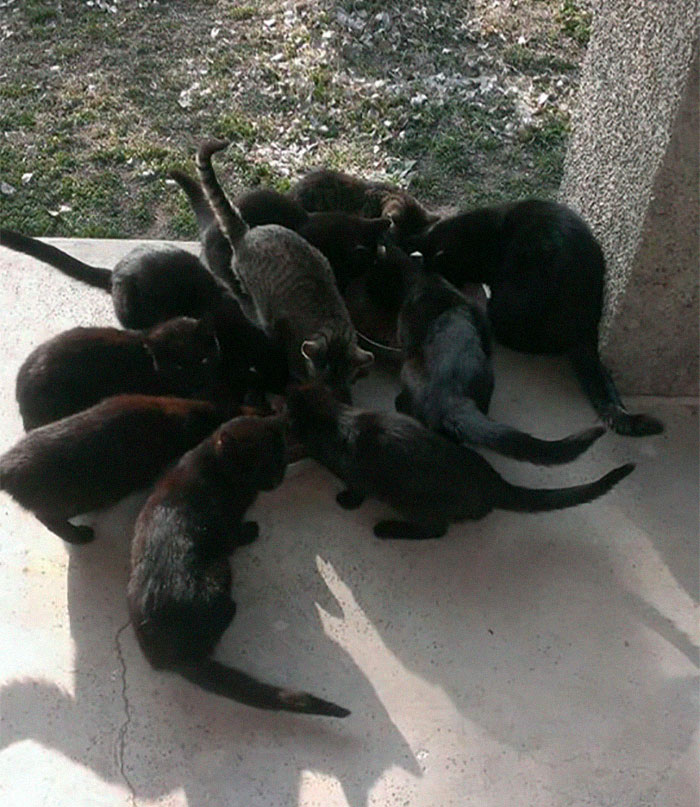 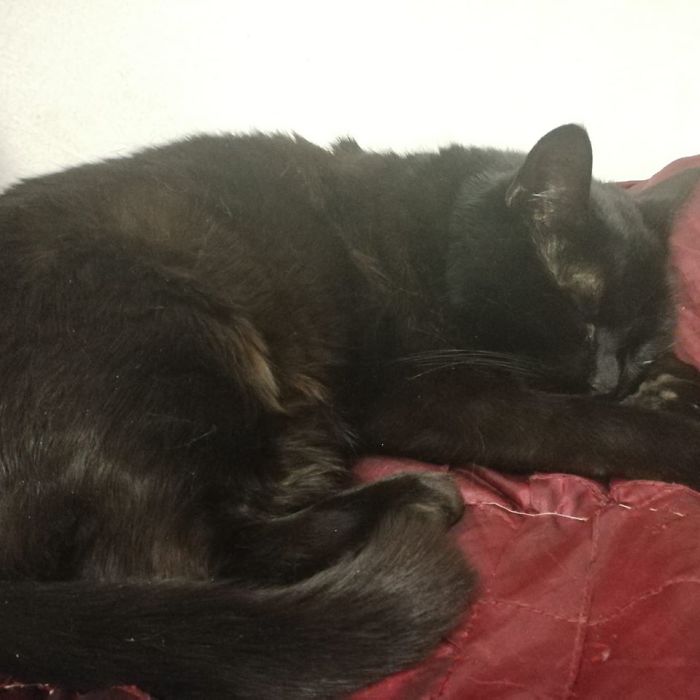 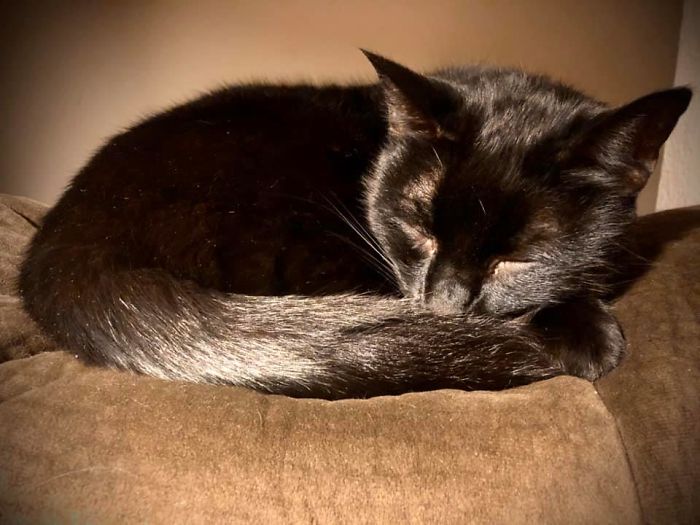 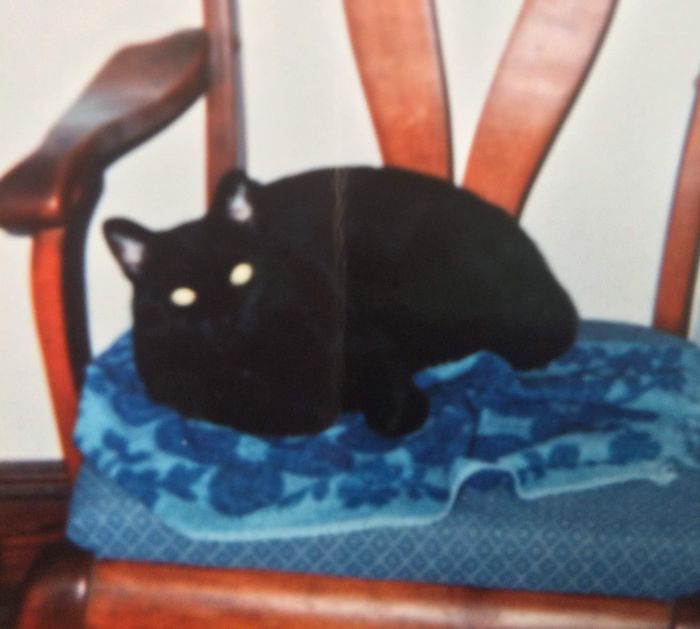 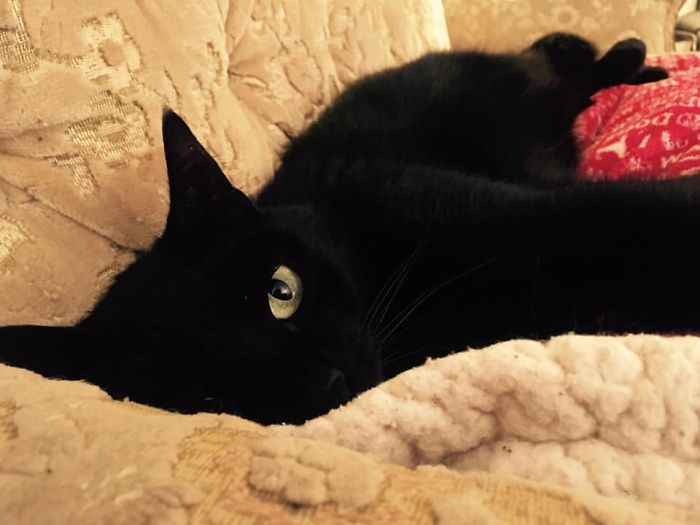 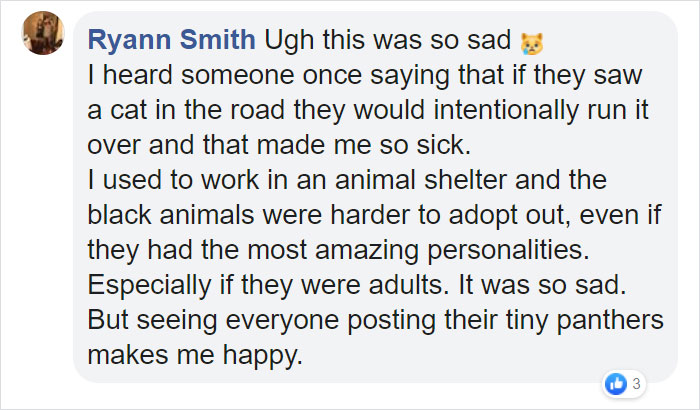 We already know the world is a difficult place to live in. These comics by Jenny made us realize that if the after life can be good, why can’t the life we live in now be a bad one. We have the power to make it good, amazing, and peaceful. So, let’s spread the love and keep all our humans and our animals, pets safe. Comment your thoughts and opinions down below!