Animals try to mimic human behaviour to try and appeal to us more often than you would think. In the case of cats, they literally evolved to have mewls and cries that mimic the sound and frequency of a human baby so that they could appeal to our instinctive nature. Isn’t that mindboggling? You’d think that cats wouldn’t know that they had to mimic the sounds of a baby to try and get our attention, but that’s what worked for them.

Other animals do it too. Like babies, they will have big eyes because they know that we find it adorable, and we can’t resist. These dogs did something similar, but instead of try to mimic babies to make us love them, they mimicked our smiles and the way we laugh because they learned from us that the expression is one of joy and happiness, and on their canine faces, it looks absolutely hilarious.

#1 This smile is infectious

The Conversation did a very insightful piece on this:

For centuries, philosophers and scientists have tried to understand what makes us unique. But people often forget that humans are not alone in being unique. Every species on the planet has some features that it shares with other species, and some that make it stand out. What the evolutionary approach allows us to do is to investigate which features or traits are shared with others and what that sharing tells us about the species in question.

Species can share a trait for two reasons: either the species are closely related and they have inherited the trait from their common ancestor, or the shared trait is an adaptation to similar evolutionary pressures. Both of these ways of looking at similarities can be enlightening when trying to understand the nature of humans.

#2 “My dog smiling after getting a treat”

Take a look at similarities derived from common ancestry. Everybody expects chimpanzees (and bonobos) to be similar to us, because they are our closest relatives. So when we look at them, we usually focus on the ways in which we differ from them. After all, any traits we don’t share with them must have evolved in our own lineage, and therefore be uniquely human.

#3 “This picture makes me incredibly happy.”

There are two problems with this. First, any differences between us and chimps are just as likely to be due to changes in chimps since our last common ancestor as they are changes in us. So we can only start concluding that a trait has evolved through the human lineage if chimps share their traits with other apes and maybe even other primates, but we don’t.

Second, just because humans are the only primate that has a certain trait does not mean that trait is uniquely human. One obvious example is vocal learning. As far as we know, humans are the only primates who learn to make the sounds that comprise their means of communicating with one another. We call this trait “vocal learning”, and it is the basis for human speech and language. However, there are many other groups throughout the animal kingdom that learn their vocalisations, for example parrots and songbirds seals and dolphins. So we’re far from unique in this case.

#6 “A friend told her dog to smile and this happened”

#7 “Happy Birthday to my Best Friend”

Situations like this allow us to use the natural experiment of evolution to understand the conditions under which vocal learning can evolve and apply this to human evolution as well.

In songbirds for example, song learning might have evolved through sexual selection – from females preferring mates with complex songs. Those males who could mimic sounds composed more complex songs, which gave their genes a better chance of being passed to the next generation. Analogously, some have suggested that human vocal learning may have originally evolved as a male sexual display, in other words singing. This is just one possibility, but it illustrates how comparative approaches can tell us more about ourselves.

#9 “Have you ever been this happy to have your chest hair shaved?” 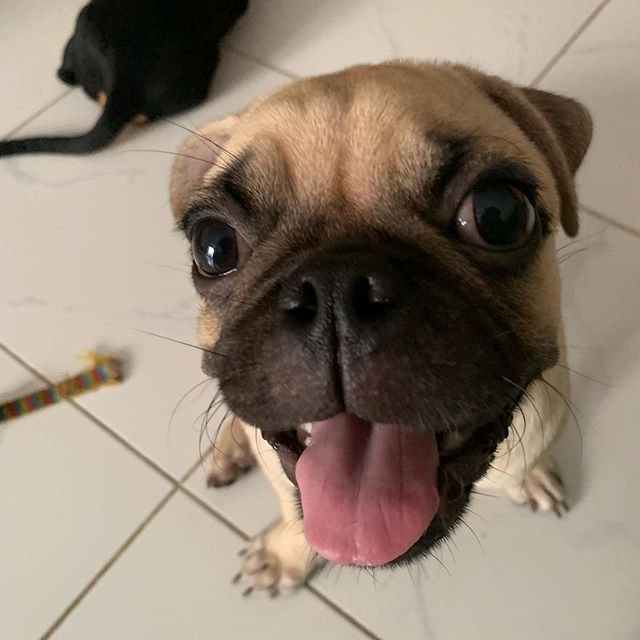 What did you think about these smiling puppies? Tell us down in the comments!