Sometimes, you should really listen to the employee.

The problem with some employers is that they think they know everything. They believe employees can only learn from them and never suggest something of their own. Even if they do recommend something, it is never taken seriously because, “What do they know?” This smugness from employers can usually land them in deep water. If you are dealing with an unfamiliar topic and you do not have much knowledge about it, you really should listen to someone who knows what they are doing, even if they are lower in the hierarchy of the company. There is no shame in admitting you do not know something and taking some help. After all, a company can only grow if everybody acts as a team and helps one another. However, some bosses really take that to heart. Sadly, they have their pride to look after. They think that if they take help from a junior, they might seem less authoritative, which is not true. This pride can get you in a lot of trouble as you are sabotaging your own company at this point. If someone tells you they know what they are doing and you don’t, just let them do it. It can’t be worse than allowing someone completely clueless to do it.

Some people don’t get the drill. They want things to go their own way. Your way isn’t always the right way. One boss learned that the hard way. This Redditor shared a story in which they were supposed to drive their boss around work and to the airport. The employee had lived there all their life but the boss insisted on him using a GPS app he suggested for specific routes. The employee decided to do what he said after a very degrading lecture. Eventually, the boss had to pay the price. Scroll down below to read the whole story.

The employee was new in their company. Part of their job was to drive their employers to and from the airport, and around the city. 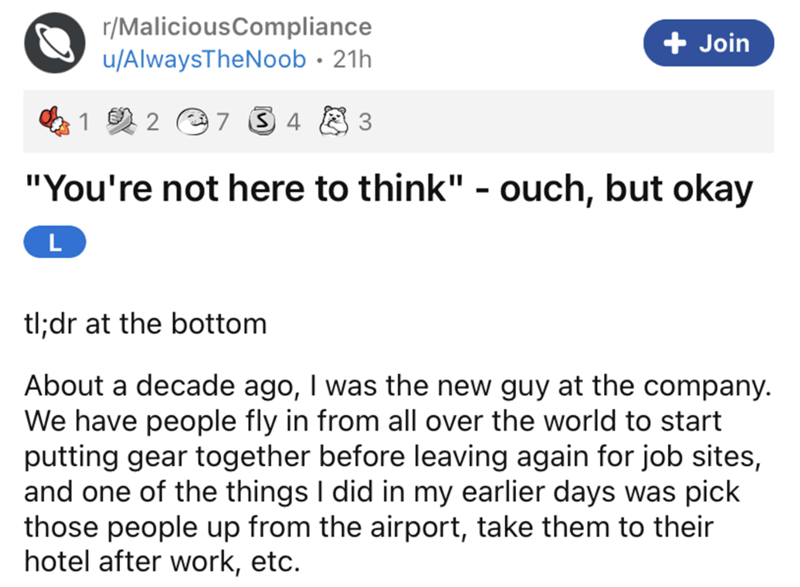 The boss was just raving about a new GPS app and even though the employee was saving him a lot of time by taking the fastest routes on his own, the boss insisted that they use the routes suggested by the GPS only. He thought the GPS knew better. 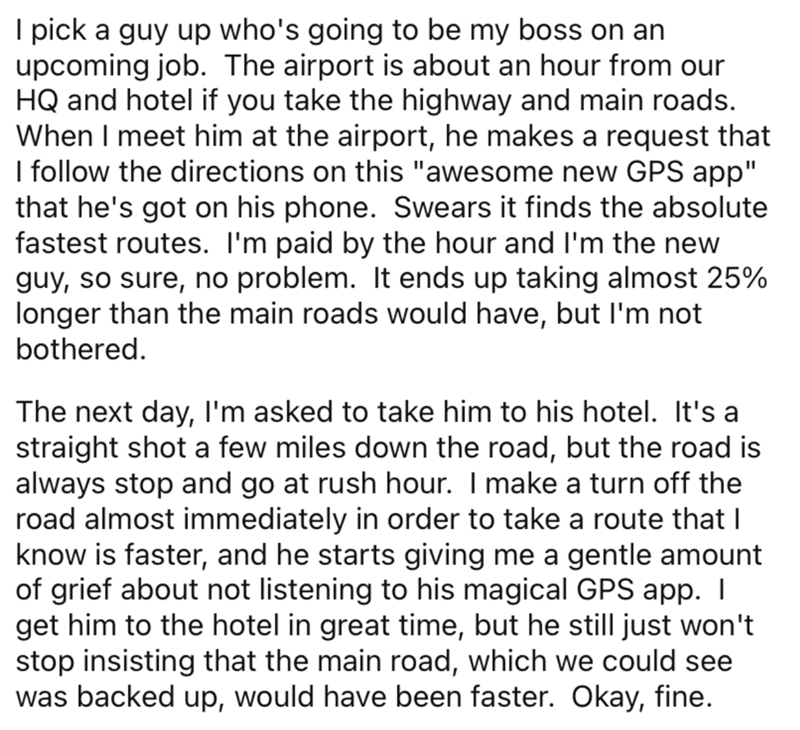 The boss gave the employee a lecture about how they should only do what the GPS said and told them that they weren’t “here to think”. It was pretty demoralising, but the employee decided to do just what their boss told them. 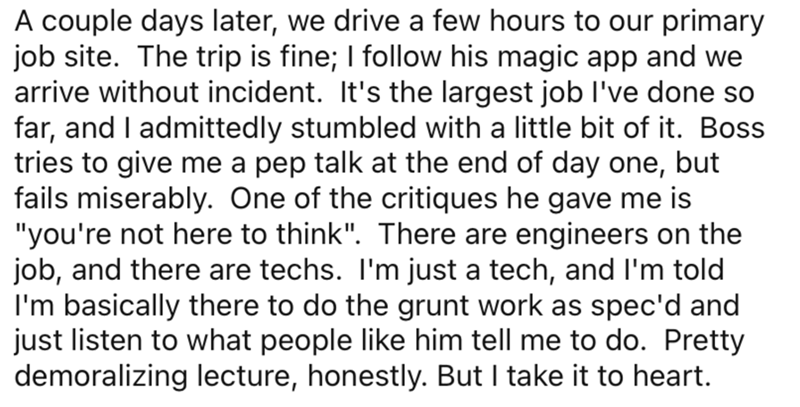 The employee had to drive the boss to the airport one day, and they decided to follow the GPS this time.

The employee crossed an exit to the airport but headed for the next one as the GPS told them to. They ended up in a construction zone with heavy traffic, which meant the boss would be late for his flight. 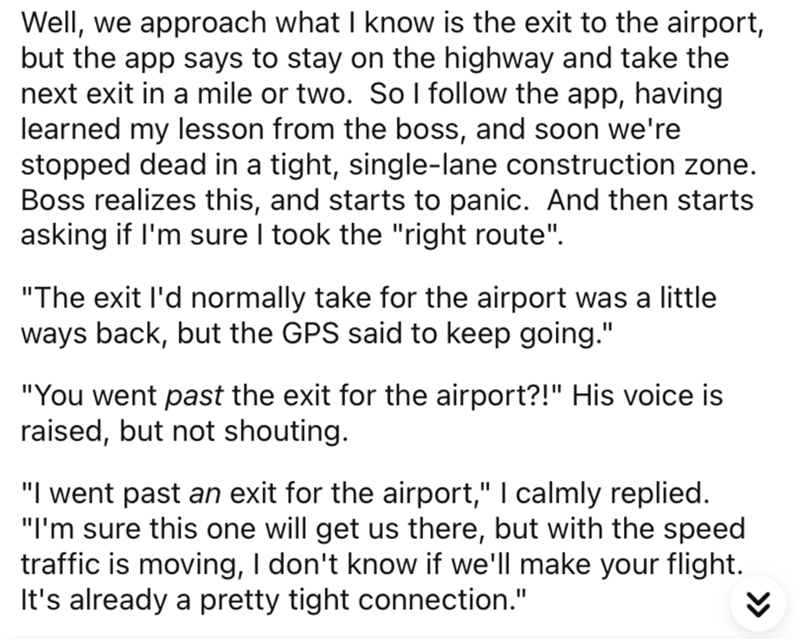 The boss was infuriated, but the employee said that they just did what they were told. They weren’t here to think. 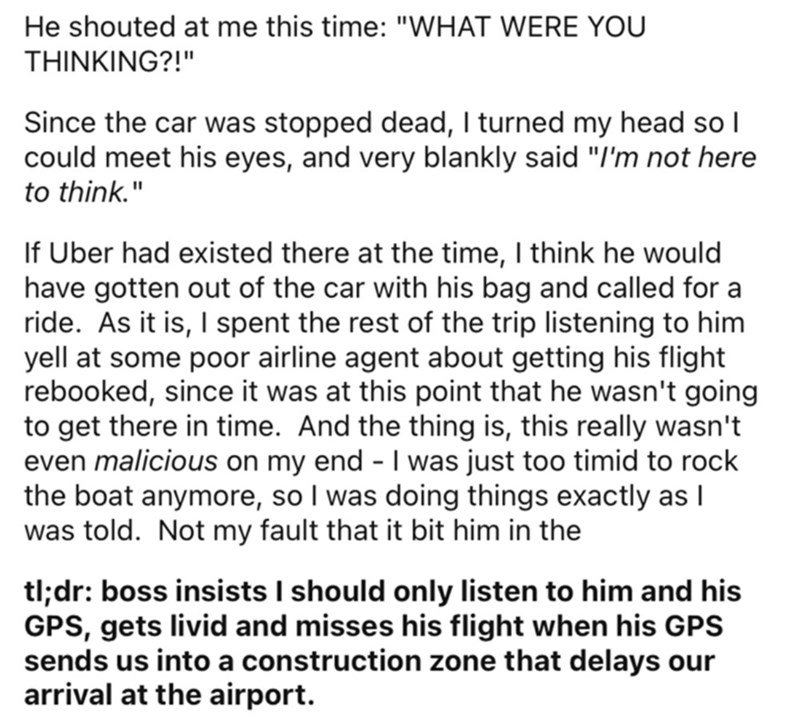 This is malicious compliance at its best. If you think you know best, do not get angry when the results aren’t what you expected. Pride will get you nowhere.

This is how the people on Reddit responded to the story. 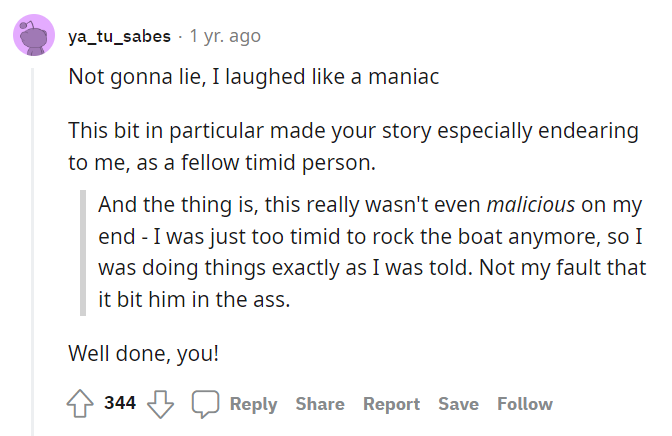 Do you think the boss got what he deserved or was it too harsh for him? Share your thoughts with us in the comments below.