You must be extremely intrigued by the title of this article and we are here to assure you that this is definitely not clickbait! Cats are generally always in their own zone, doing their own thing and essentially not caring about us humans, we still love them to bits. And obviously, we cat lovers would know the impact of catnip on cats, their happiness drug. But, what happens when cats start randomly munching on weed? Now, that’s something we never thought we’d get to talk about, ever!

According to Joel Warner, the effects of such edible last longer than the joints itself and the feeling you get feels something like a strong AF punch;  “In short, most edible marijuana is metabolized by the liver, which then produces a kind of THC that has a bigger psychedelic punch than the THC that reaches your blood plasma when you smoke it.

So when you finally feel the edible’s effects, it will likely be more powerful than what you’d get from a joint – plus the high will last much longer, up to 12 hours!”

While this may seem like a lot of fun for us humans, cats are just too small to handle it all at once! You can probably imagine it by now, but let us help in walking you through the entire process of how this particular cat, who stole her hoomans weed cookie, handled being extremely high. Fair warning, it might not be as amusing as you’re hoping it to be. More importantly, do not try this with your pet at any cost! Seek immediate veterinary help if your pet somehow manages to consume edible marijuana.

Carmine Deville, recently turned to Twitter to tell everyone about her cat’s shenanigans. Her story about her fur-baby stealing her weed cookie and devouring it without a care in the world had everybody shocked to the core! However, knowing her cat well she titled her thread as: “My horrible gremlin kitten snarfed an entire weed cookie and got v i o l e n t l y high the other day: a thread.”

She started off by stating some serious facts

She fully accepted her mistake of not supervising the cats enough and explained how the cat is now perfectly fine. We now know that both her cats are cookie monsters and would eat anything and everything in sight.

And she couldn’t have been more wrong!

So anyways I had a cookie in the freezer and put it on top of the fridge to thaw and left it there while I used the restroom, thinking it was safe inside its paper wrapping and three plastic freezer bags.

Because chocolate is way worst for a cat or even a dog than we could ever possibly imagine. Marijuana seems like nothing as compared to chocolates!

So I walk in on this and see the shredded bags and crumbs and my cats casually licking themselves and just kind of..

Panicked, she had no choice but to google for some solutions

Instant “They’re both stupid enough, which one did it?” panic attack. I Google how to make cats puke. Cue 30 minute montage of me crying while rolling my cats up in towels and force feeding them peroxide in alteration while they struggle. (Spoiler alert: it didn’t work.)

When nothing else worked, the waiting game began

These cats were born and raised in dumpsters and are one with the trash. Vomiting cannot be induced. So at this point it’s too late to do anything except wait and see who gets high as balls. And unsurprisingly, it was my raccoon shitten, Carmilla.

According to Veterinary Information Specialist Audra Stillabower, here are some common symptoms of toxicity by marijuana;

sedation/lethargy, dilated pupils or glassed over eyes, dazed expression, difficulty walking and vomiting, either a low or high heart rate, vocalization such as whining or crying, agitation, trouble regulating temperature causing the body temperature to drop or rise and incontinence/dribbling urine, tremors, seizures and potentially coma.

No wonder why Carmilla had regrets

Unlike other stories, this one had too many details to help us understand

Béla Lugosi stayed with her and gave me his signature stink eye while she descended into a stoned stupor, as if it were my fault his sister transformed into a barely sentient breadloaf #CarmillaKitten #hellcats

‘Is this what I walk on? What sorcery is this?’

Eventually she stumbled into the bedroom and cried for me to pick her up and put her on the bed, where she proceeded to sit like this and stare at her paws and tail for a concerning length of time

All she needed was a little bit of extra attention

It wasn’t long until Carmilla finally sobered up – Thank god for that!

After like four hours of anxious babysitting, she finally sobered up enough to eat and walk around, and spent the rest of the night sleeping it off on my lap. #CarmillaKitten pic.twitter.com/LATsWiqLyo

Carmine had nothing else left to say but:

There’s no moral to the story but in summary, please do your drugs before your cats do because this was horrible and the only way I can deal is to joke about it on the internet. The goblin in fine. Thanks for joining us for Carmilla’s Big Drug Adventure 2020.

The Twitter fam had a lot to say as well;

Well, at least someone could relate.

And they had tales of their own to tell!

So, now we know to be extra careful with our fur-babies. Clearly, they do not know what they are getting themselves into and how stressful that gets for us, hoomans. Even though we might laugh at it later, during that time, it’s just too much to handle! Have you ever experienced something like this? Let us know in the comments section below! 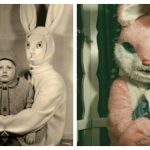 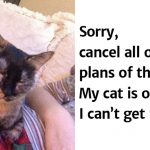 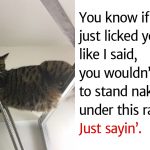 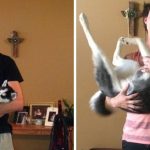 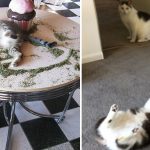