No one has it easy nowadays.

Be it married people or single ones. Who are we to backlash anyone at all? Life is not a competition after all, especially when it comes to what you do and how you do it. Don’t let anyone make you think you otherwise.

Some people make it their habit to brag about how busy they are and how they don’t get time for themselves. It’s even more annoying when you’re in a group of ladies and some of them start telling you how having children and a husband is a tough job and others have it so much easier than them. Bro, you chose that life, so quit complaining about it! Having children is a beautiful thing and no other joy in this world can be compared to it. You should be bragging about how cute they are instead.

A quite similar incident took place when this childless, unmarried woman shared with her friends how tough and demanding her job was and how she almost never gets time off to do something fun or even hang out with her partner. Upon which she was made fun of and talked down to. She shared her story on Reddit and almost everyone sided with her. Except, of course, her own friends.

No way, girl! Everybody has their own life and stuff to deal with.

Not surprised. Because people love to judge others.

I feel sorry for her. People like her actually have life pretty rough.

And what’s wrong with that?

Oh right, because only people with children have an actually busy life, right?

And who are they to tell her not to complain?

I probably would have done the same if I was her.

Exactly. Everyone has a different life and choices. No one is comparable.

Not exactly unfair, to say the truth.

Let’s see what people have to say about that.

You’re right about that.

We all know parenting has its own struggles, especially when you have more than one kid. It’s easy to go crazy all over the place. But that’s no reason to underestimate other people and disrespect their struggles and career goals. Let’s all be kind to each other and help each other grow and succeed in our own way. Thankfully, these women understood enough and supported u/destinedspoon.

She’s a mom and she agrees completely. 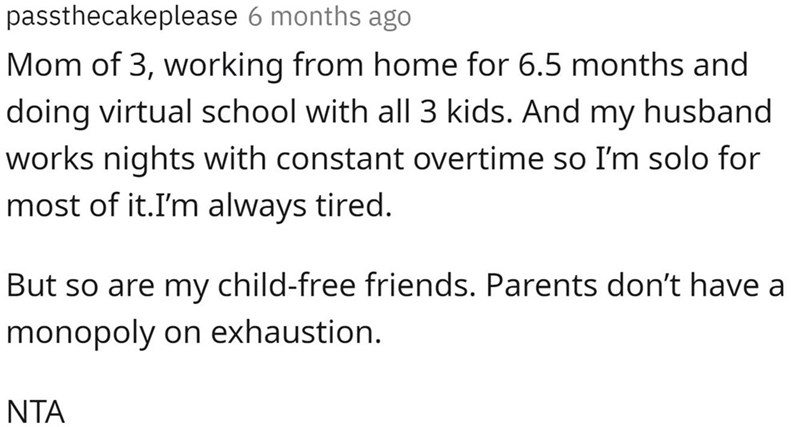 Legit question though; Why do you keep having them if they’re so exhausting?

See, almost everybody agrees, even the mothers!

Some people think everything is a competition.

Did you enjoy reading that? Come back for more entertaining stuff every day!