Those of us who work at restaurants and grocery stores have a lot of interesting storing to share. The meet more people on a daily basis than most of us do in a week. Not only do they meet a lot of new people from different backgrounds but they experience a lot of different behaviors. Some of them are extremely empowering and generous and some are simply worth forgetting. Some people are just pathetic human beings. They lack empathy and in general they don’t have much common sense. They also lack social manners and don’t respect others much. Restaurant/ stores employees have to put up with a lot of absurd behavior on a day to day basis.

Some people are simply too bossy or controlling and don’t care where they are at. The don’t hesitate in exhibiting that aspect of their behavior, even at public places like restaurants. We recently came across a Reddit story posted in the “Am I The A*shole” subreddit. It was posted by a 22 year old waitress doing two jobs to get through her college when one day she met with this couple at the restaurant she worked at. The couple just couldn’t decide whether or not the husband would have water or the beer he wanted. The 22 year old OP ended up doing her job and the wife wasn’t very happy with the service. Scroll down to read the whole thing. 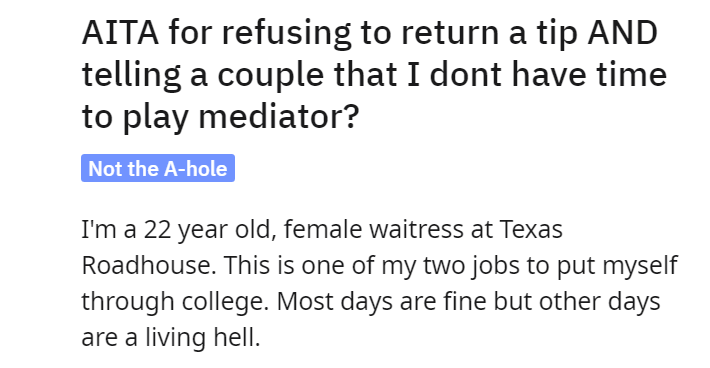 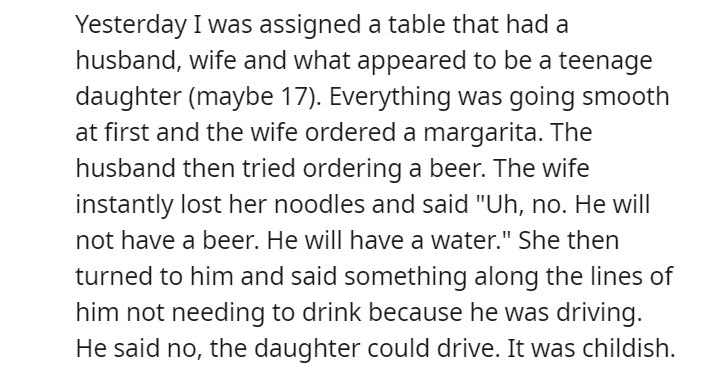 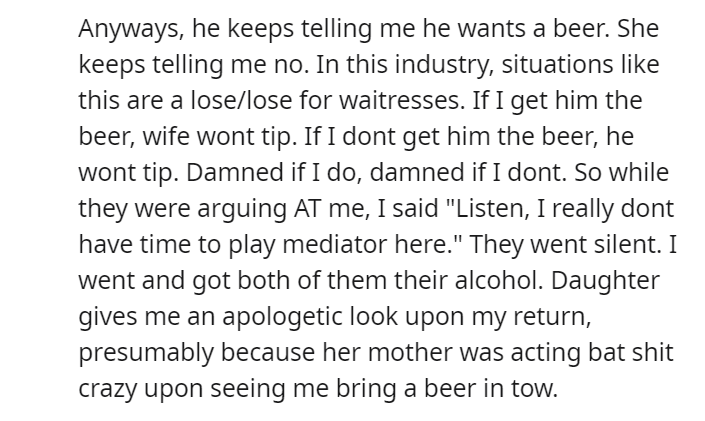 OP gets a nice tip.

The wife was being unreasonable.

The OP is clearly not the a*shole. She was just doing her job. It’s not her problem that the couple wasn’t on the same page. She had to do her job, she had to serve. So she did. It’s clearly not her problem that the wife was being all controlling and the husband wasn’t convinced with having water. The bill was paid and OP received a tip of $40 for her services. The guests walk out of the restaurant and everything is said and done. It’s completely outrageous of the wife to show up an hour or so later asking for the tip her husband gave OP. Well, if she had this much of a problem, why didn’t she ask for it when the husband was tipping OP. It’s simply ridiculous. OP was simply doing her job. Here are some comments from the Redditors. Scroll down to read what they think.

She just did what seemed right.

Manager did a great job too.

That’s the whole point. Who makes such absurd demands?

Solve your problems somewhere else, in private. 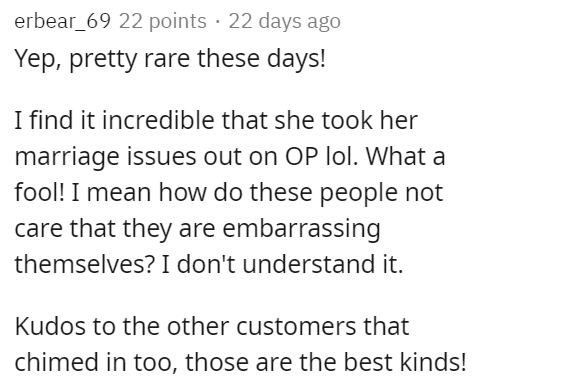 Hope things are better for her.

What the wife did was super foolish. Asking to return the tip after leaving the restaurant is all kinds of wrong, straight off the bat. She should have let it go and moved on. What do you guys think? Did the OP do the right thing? If you were in this situation, what would you have done? Let us know all about it in the comments below.