I am quite sure the Karen didn’t see this coming.

There are many people in this world who will do anything to extort a company or an individual. Not only is this morally reprehensible but is also against the law. But that doesn’t stop them since companies would rather pay off these sorts of individuals than pay a lawyer to fight against a dubious lawsuit.

However, some of the time, they get what they deserve when companies get a bit vindictive. This Karen thought she could get away with threatening a company and they had to do what she wanted but she was certainly not ready for what happened afterward. Rather than giving in to her dumb demands, the company chose to fight back. And I am so glad they did. I hope she learned her lesson after this but sadly knowing Karen’s, they never do.

That sounds like a very stressful job if you ask me. 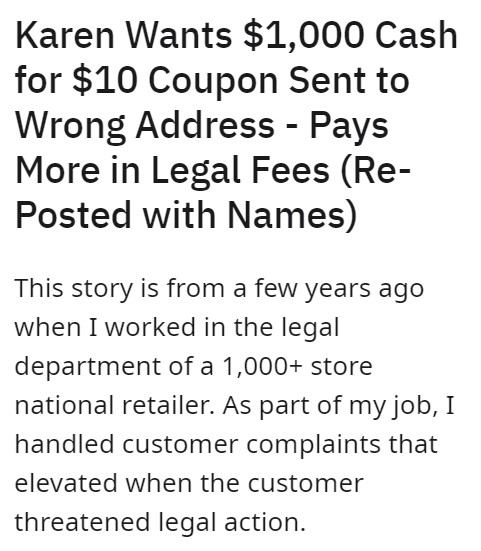 This is why I say that ‘Customer is not always right.’ 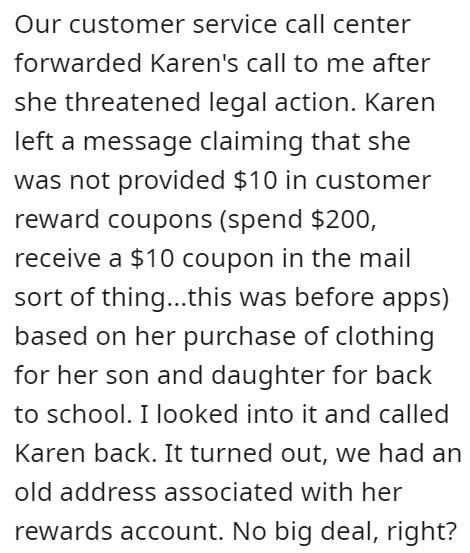 This is straight-up extortion and I don’t think this is legally allowed anyway. 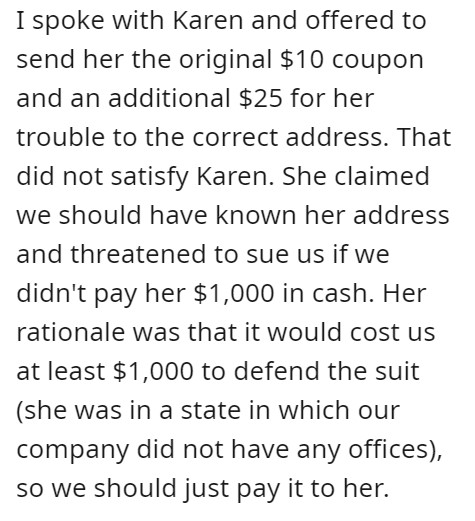 Most companies would have just paid her but I am glad they didn’t. 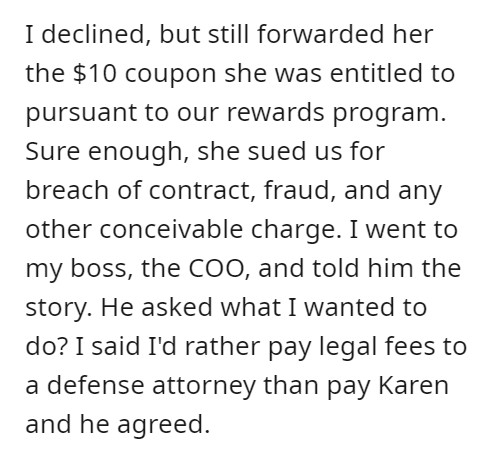 Even lawyers want a bit of sweet revenge once in a while. And he got paid for it too so it’s a win-win situation. 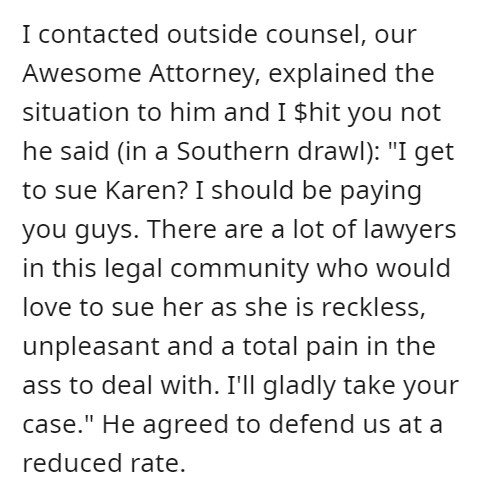 I bet we all knew where this was going. 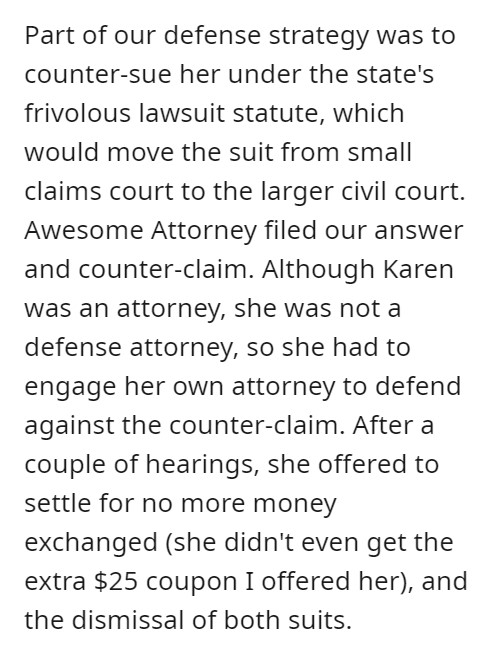 You know the more I think about it the more I would have actually gone after her for a guilty verdict on the frivolous lawsuit. This would have made her responsible for all legal costs as far as I know. By settling you’re still on the hook for your costs and well she does still have to pay her own attorney that doesn’t negate that she knowingly filed a frivolous suit.

I am presuming that the call where she informed you she would settle for 1K was recorded. I’m sure this would have been proof enough to any judge or jury, especially when it revolves around the fact that she did not notify you about a change of address.

That’s the bottom line she moved did not register her new address and got mad because something was sent to her old address. –EvilLoynis

However, Karen couldn’t have seen this outcome and she was left with empty pockets. 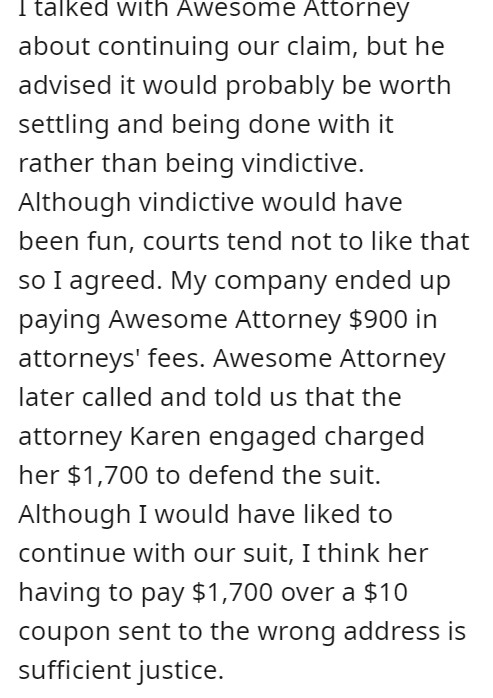 If she had only accepted the generous coupon in the first place. 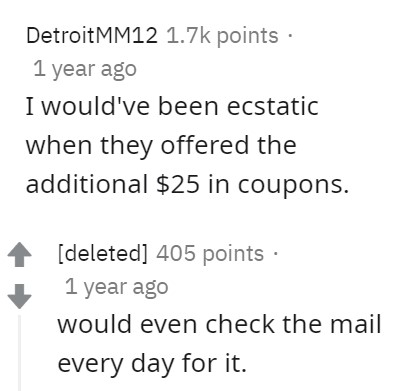 Same here. I recently had some problems with my Sam’s Club card which caused me to talk to customer service in-store several times and then two long phone calls and for my inconvenience, they sent me a $50 gift card which I was perfectly happy with.

Yes, it was a pain in the a** but ultimately everyone I dealt with was pleasant and honestly trying to help so I’m not going to hold their feet to the coals. Besides, 50 bucks are 50 bucks. –Chaosmusic

A complaint should have been filed against her but alas wasn’t. 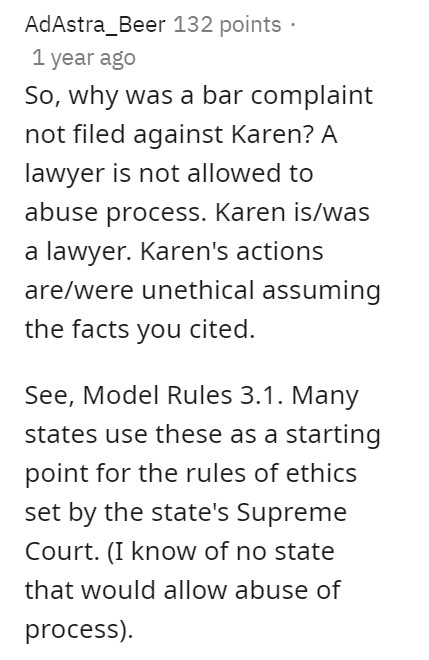 People love to threaten but not everyone can go through with it. 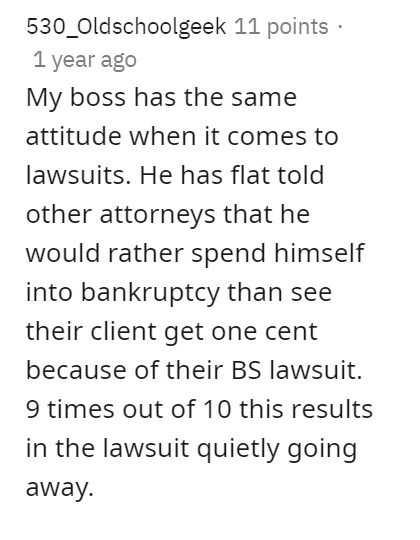 We paid our own attorneys’ fees, that is true, and it definitely would have been better if Karen’s fees had been $2,600 instead of $1,700. But we were a company with $400 million in the bank and $300 million per year in profit.

It’s what the petty Karen deserved at the end of the day. 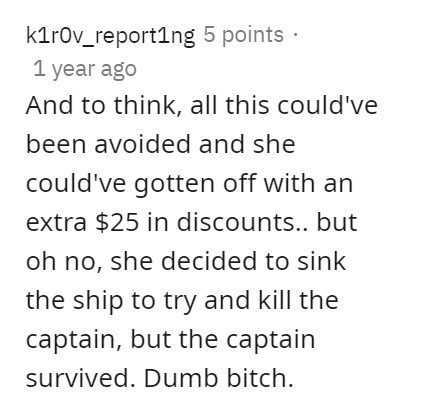 What do you think about this revenge story? Would you ever do something like this? Let us know in the comments below.