Truth is not always easy to swallow.

And it can be especially hard when the person having to deal with it is a child. Parenting is hard and you never know how a simple decision now might affect your child’s development in the future. A little mistake can have consequences years later that you never could have imagined. So it is always good to think before doing anything that affects your child.

So it is not surprising to see parents on the Internet asking help from strangers. Whether it is because they want to know something. or that they want an opinion on whether they are doing the right thing. And this can also help them look at a situation from a different perspective.

That is exactly what this father did.

There is no shame in asking the people on the Internet for some advice.

When I was younger I had a casual sexual relationship with a woman (Sally) I met at a restaurant. We had intercourse more than 5 times but less than 10 times. I texted Sally on a Friday night, which is when we normally hooked up, asking if she wanted to meet up and she told me to lose her number.

I did and later found out she was pregnant. I contacted her again to see if the child was mine. She told me it wasn’t and that she would be getting an abortion anyway and once again told me I needed to lose her number.

I moved on. One day I got a message from Sally’s mother. She accused me of abandoning her daughter and my son. I told her I had no clue what she was talking about. She informed me that she had been taking care of Sally’s son since he was 4 months old because Sally had a drug issue.

At this point he was 1.5 years old and she (grandma) was diagnosed with pancreatic cancer. She said she couldn’t do it alone anymore. I ended up getting a DNA test and found out I was the dad. His grandmother passed away shortly after I took custody.

So that is how the Father got his child to be with him.

He’s 7 now (8 in August) and has been asking about his mom a lot lately. I have always told him that his mom loved him but wasn’t able to take care of him. He has accepted that answer until recently and wanted more answers. I decided to be honest. He asked why he had to live with his grandmother before living with me.

I told him, “Your mom and I weren’t talking when she was pregnant with you. I didn’t know she had you until your grandmother told me. After that I did everything I could to get you.”

He asked if he would ever be able to see his mom again. I said, “I don’t know. I don’t even know where she is. She has a sickness called addiction. Sometimes when people are sick like that they make decisions that no one understands. That doesn’t mean she doesn’t love you though.”

He cried a little and said he hopes his mom gets better.

The Father decided to tell his son the truth about what his mother did.

I was gutted and called my mom. She said I shared way too much and hurt him. She said I should have shared much less and stuck with the “she couldn’t take care of you” line even though he was asking for more.

I don’t know about you but it seems he handled the situation pretty well. It is always better, to tell the truth than to lie. The kid was going to have questions no matter what happened. At least you can tell him as much as you can while also being careful and not oversharing.

Kids can understand a lot more than adults think.

This happened yesterday and he seemed okay today. He didn’t say anything about his mother and I am not going to push it. I have always let him lead these conversations. I think I am going to look into therapy and/or support groups for children of parents battling addiction. I will also be looking into resources for myself to help me navigate all of these new situations as they arise.

I have no experience with kids other than my own so I may be overestimating my son’s ability to understand things and maybe someone can help me work on that. I’m honestly not even sure if his mom is alive. Last I heard she was but that was a while ago. We have a lot to navigate and I could use some help from a professional so I will be looking into that.

And it seems people on the Reddit thread agree as well with what he did. 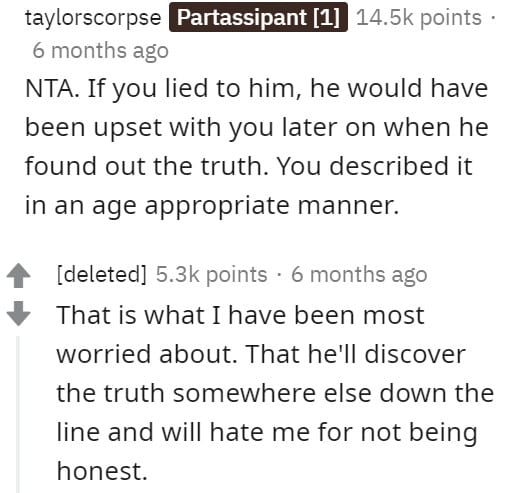 Kids can be curious and if he had found about it another way, he would have been gutted. 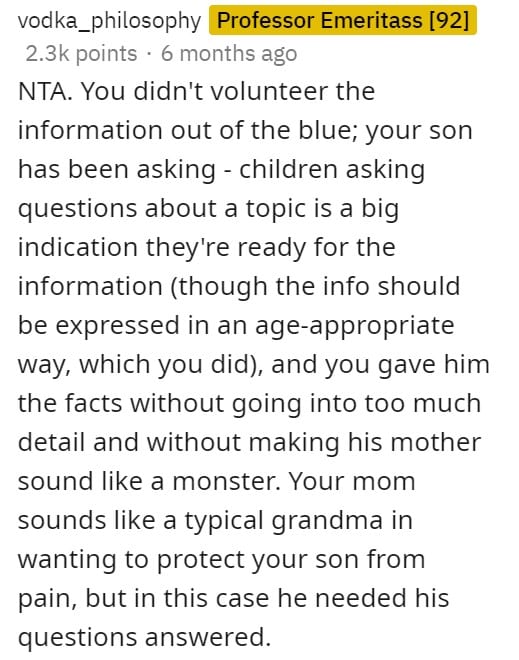