You guys, these Disney art is getting out of hands. Every day we see more and more creepy Disney at that is purely made for the purpose of giving the viewers nightmares. They are so scary and creepy, it is surely going to ruin your good childhood memories with these cartoons. It has done the same with me but I love artists and their creativity which is what keeps me hooked on these type of art. I appreciate the artists and their unique talent.

Today we have gathered some extremely creepy illustrations of Disney characters that are turned into monsters by various insanely talented artists. These art works will shock you, creep you but also amaze you. Keep scrolling to see these scary Disney art works…

It looks like something really bad happened to Belle, she is a zombie now. Who bit her? 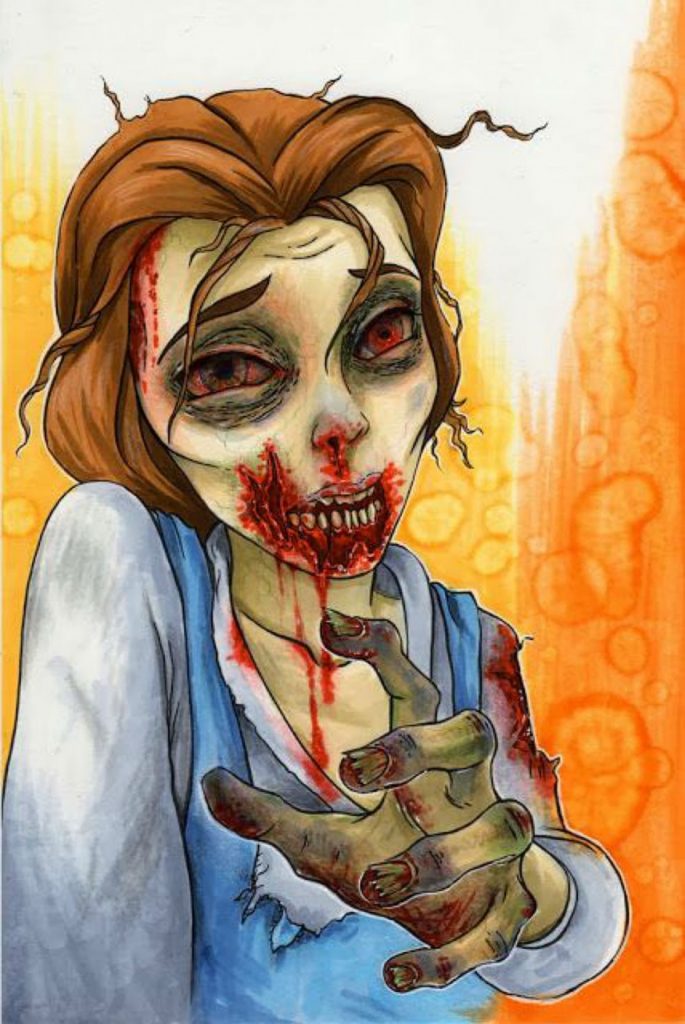 Woah, woah. Wait, a minute. Minnie The Mouse, is that her? That stick figure and sick smile are giving me a weird feeling in my stomach. Look at her bow…Nevermind. Let’s move on. 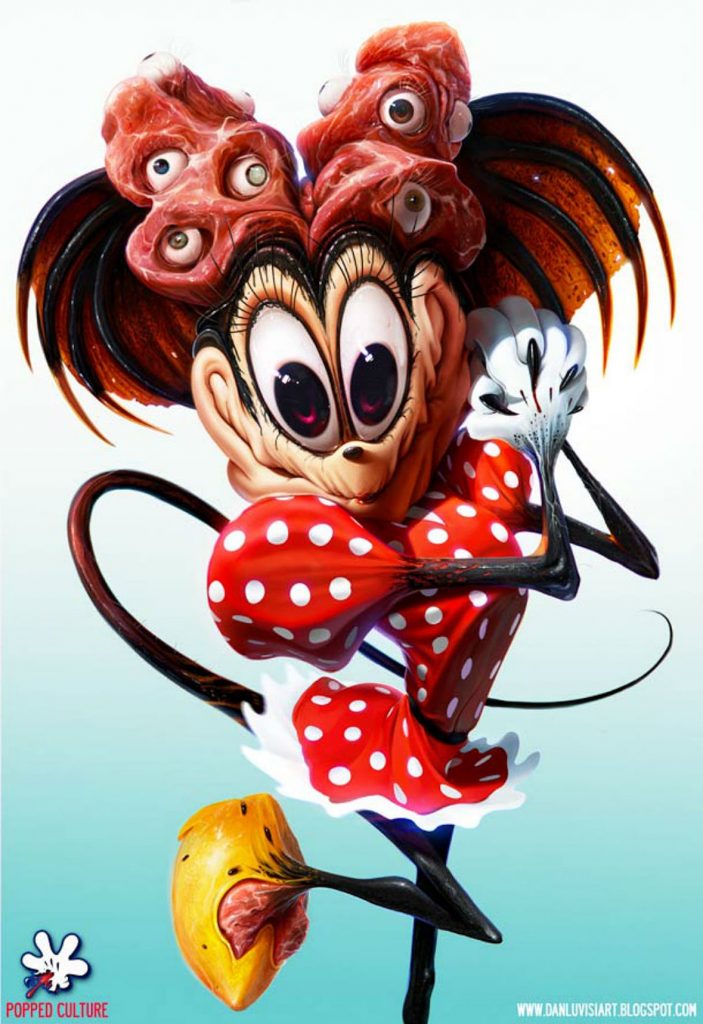 Oh, the magic spell did not go as planned with this Cinderella. Instead of making her more beautiful, the magic probably reverted and now she is a monster. What a tragic fate. Even the rats turned evil too! 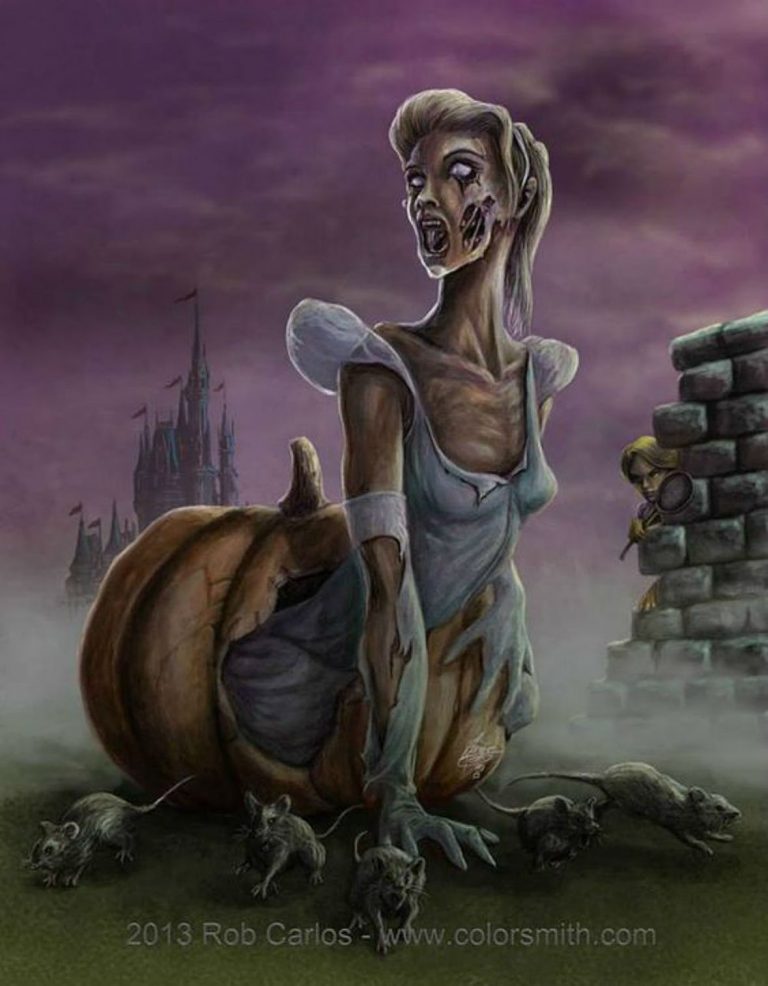 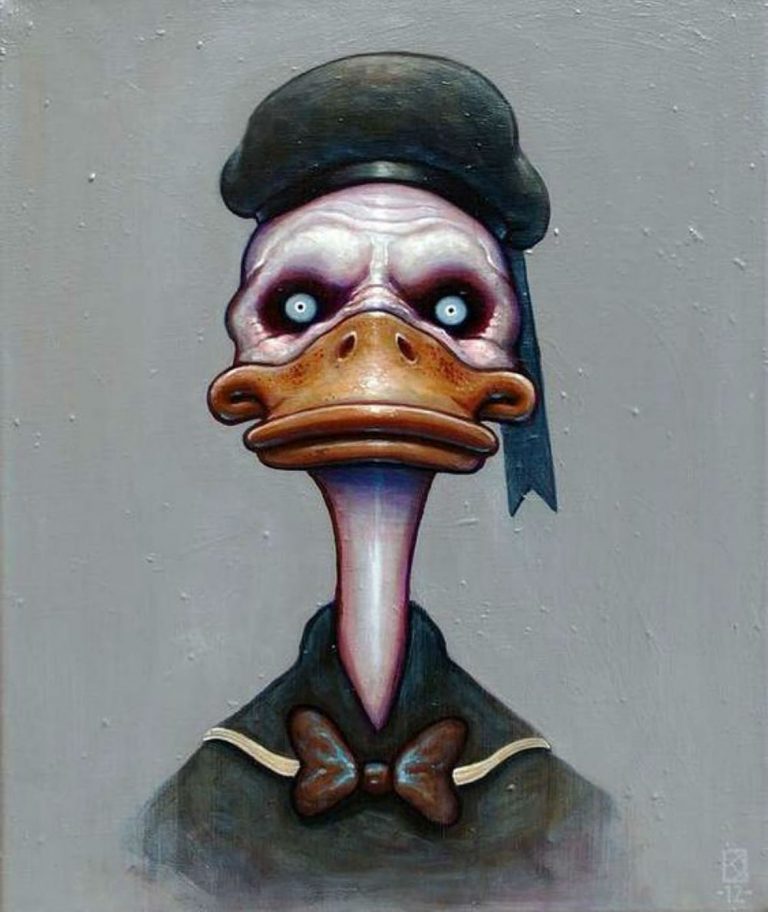 Okay, so Pinocchio is finally lashing out after going through a lot. I do not blame this poor guy though, he was facing some serious problems. 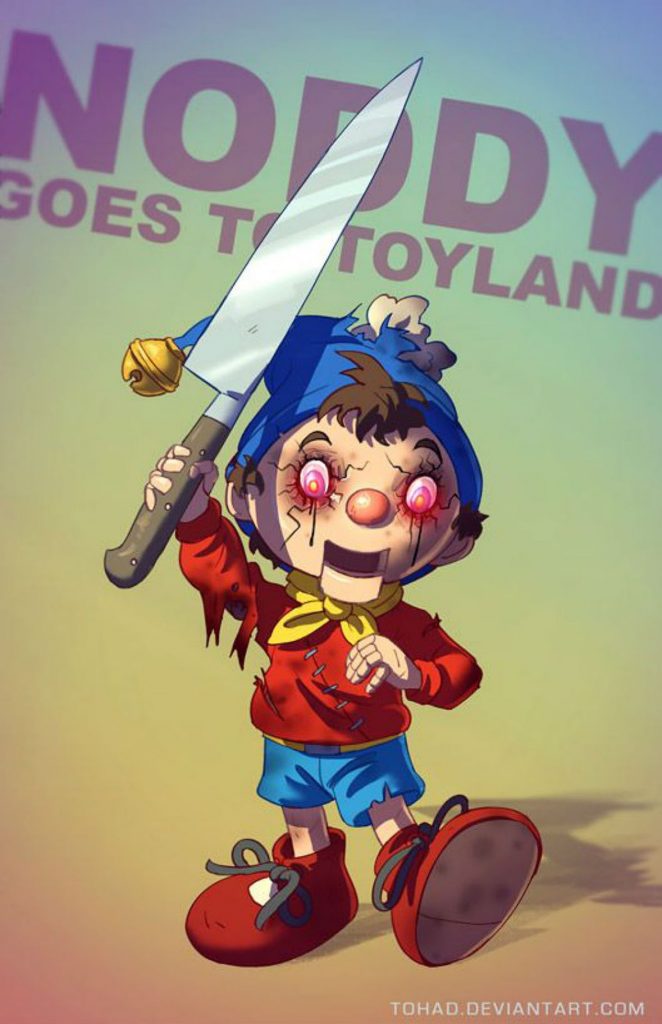 No, not him too! I love Genie. Or should I say loved because this illustration is so wrong, so weird. I do not know where to begin, everything about this is so not nice at all. Just look at his eyes! 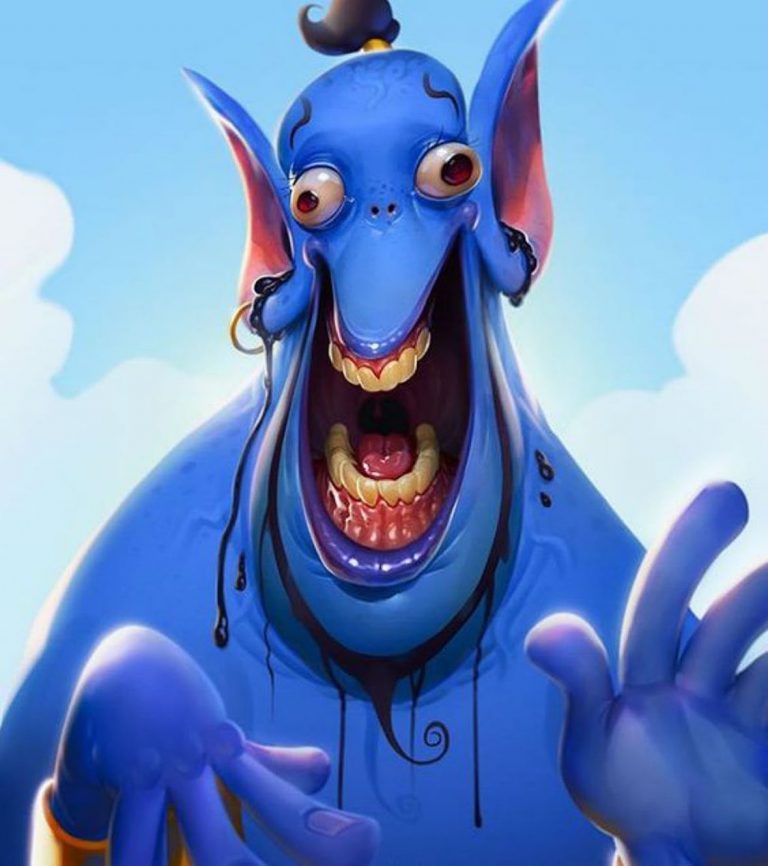 I know guys, these are just too much. I am also having mixed feelings about these art pieces. I can not decide if I am fascinated by these artist’s talent or am I more creeped out. Who would have thought Genie could look so creepy? What were these artists thinking when they made these creepy illustrations of such cute characters? I bet you had no idea Cinderella could be turned into a zombie too. This is just the peak of creativity and talent, you have to admit it.  But do not even get me started on that so called babysitter Donald Duck, just do not bring that up because I am just so creeped out by it myself, I just wish to unsee that image somehow. Keep scrolling to see more of these weird illustrations…

Not my favorite Disney Princess Ariel! What happened to her? Why are big parts of her tail missing, like someone bit off a big chunk of her flesh. Probably a zombie because she is a zombie now. I feel so bad for her. I feel like it was probably Ariel who bit Belle and now both of them are zombies. So sad. 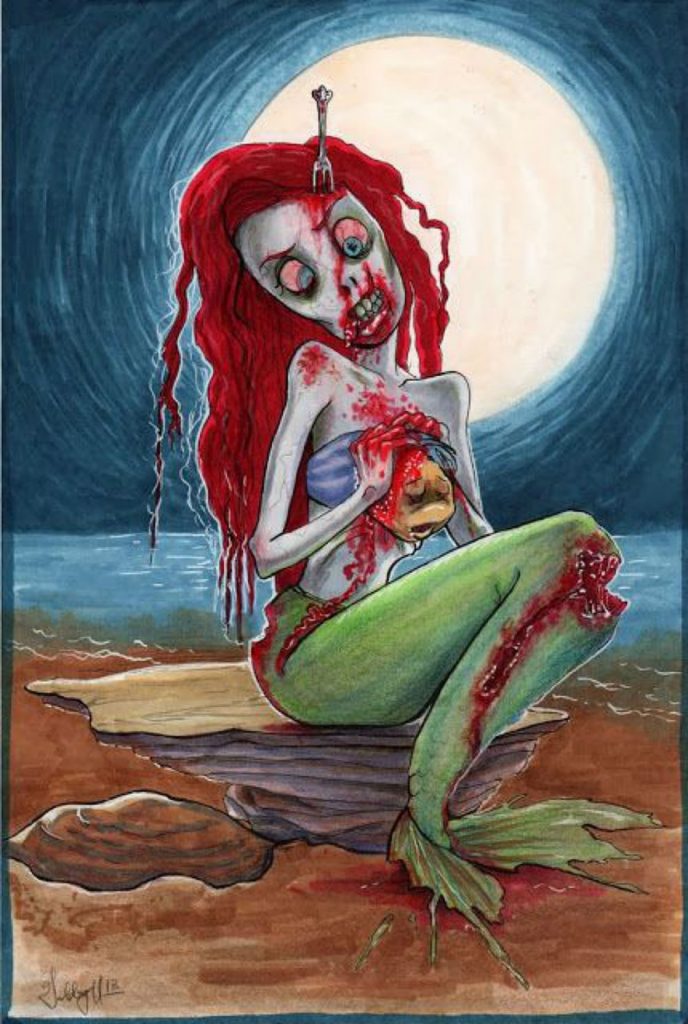 This is so weird, you guys. I have so many questions about this one. Why is Princess Jasmine bleeding green? Where is Aladdin? Why is the magic carpet holding Jasmine forcefully like a hostage? If Aladdin is not here then who commanded the magic carpet to do this? Does that mean the magic carpet now has a mind of his own and a free will so he is going against his master? Why is there a cross dripping blood in the air? Well, if Jasmine actually looked that scary I would not complain about taming her. 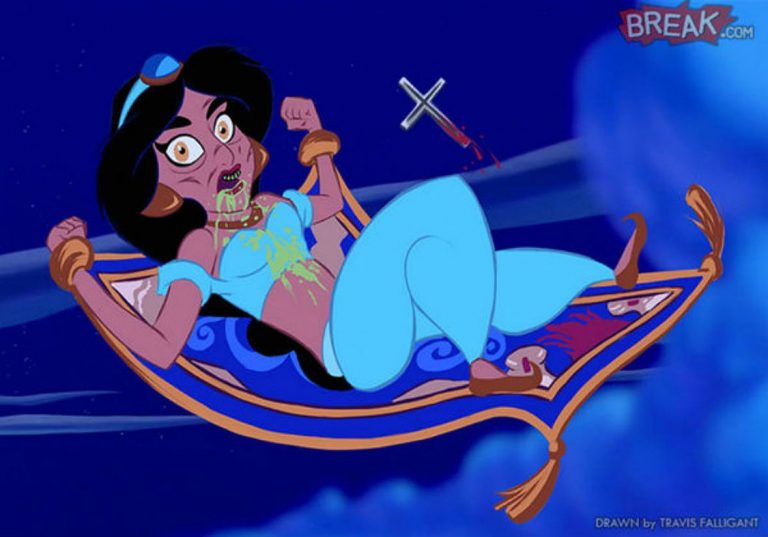 Oh, God. No. What happened to the innocent, tiny, dainty Bambi? She was so delicate but this looks like a monster! Please, do not ruin my childhood like that. But there is also a good thing about this version of Bambi though, now no one will even dare try to hunt her. 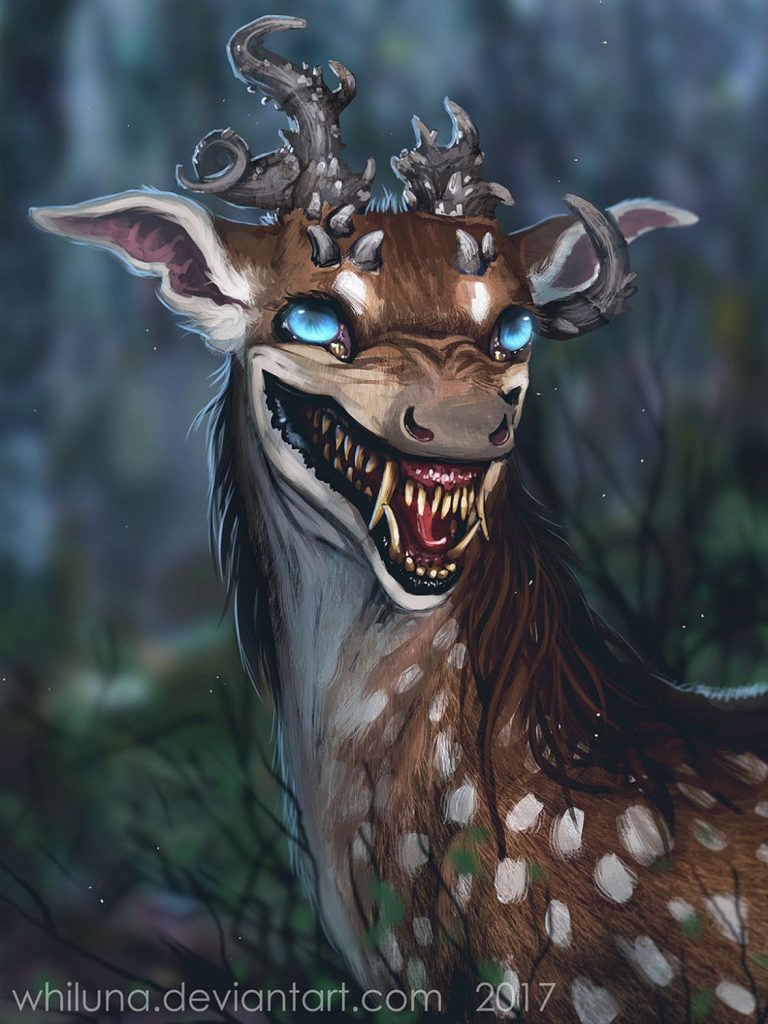 Well, that is exactly what happens if you eat too much honey. I am not surprised, I saw it coming. This is just so nasty. 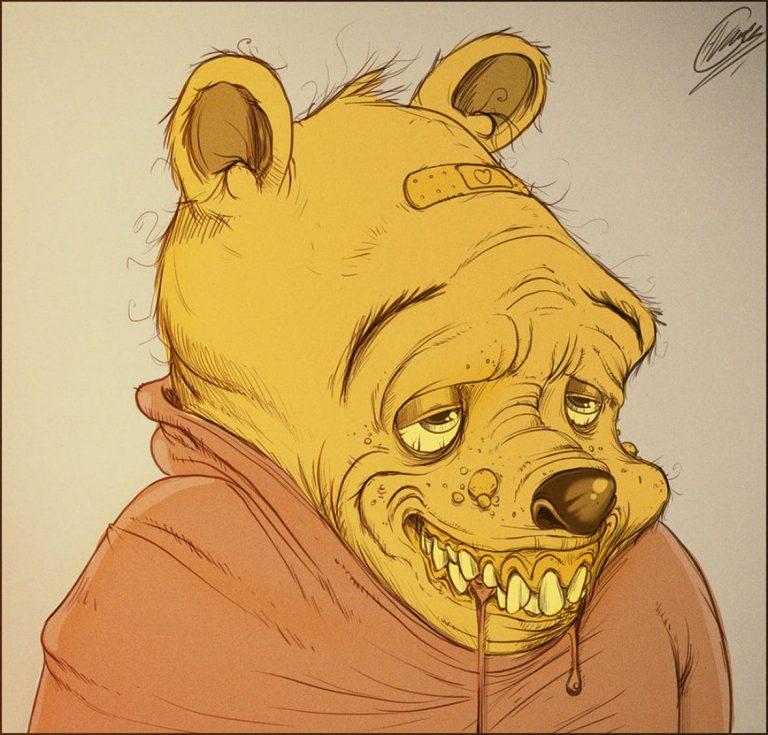 Mickey has found a new job now. Not what we thought he would choose as a career path but surprisingly, Mickey is a biology teacher at some school where he teaches students human anatomy. Shocker, right? 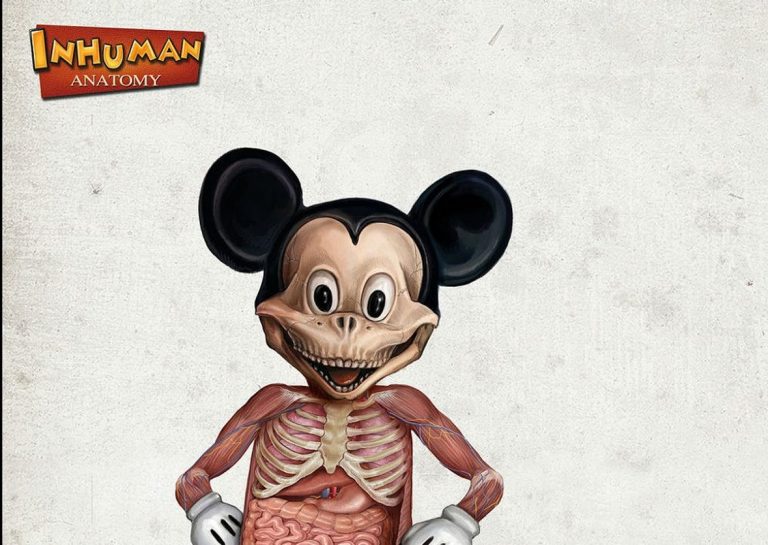 This is so creepy. Let’s just hope Goofy is auditioning for a role in the movie Wrong Turn. Otherwise, this is just too much scary, I am trying to erase this from my memory but I am failing miserably. 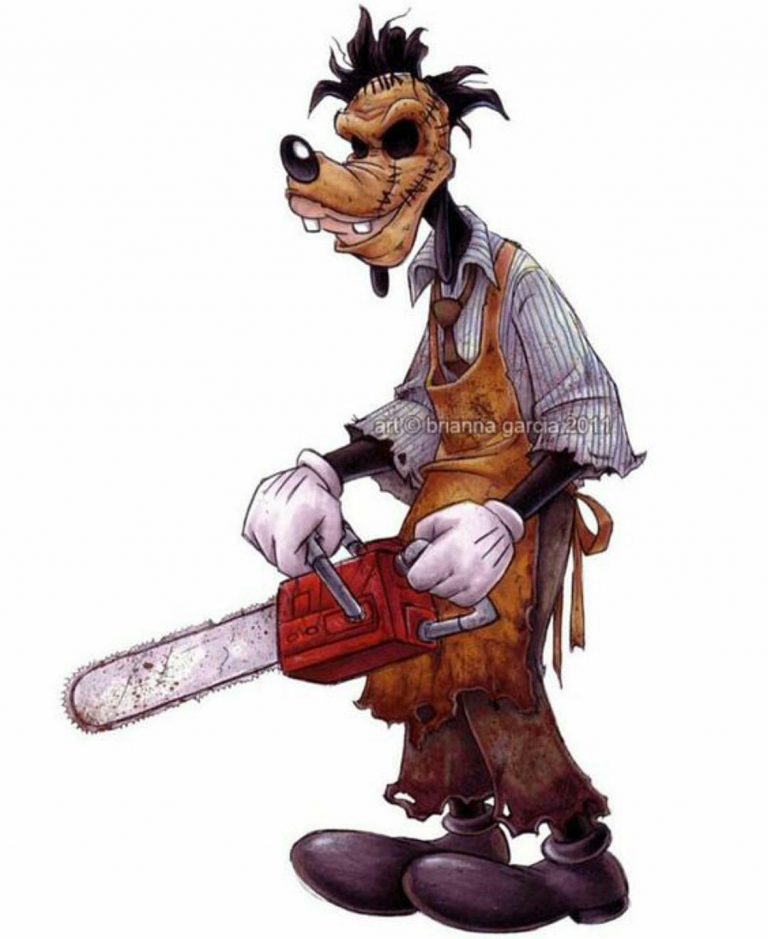 The poison does not harm Snow Whie anymore. She is stronger, powerful and…a monster. She is ready to take over the world with her new profound powers, she is going to take revenge on her enemies. Surelu, by making them eat this poisoned apple. Oh, how the tables have turned. 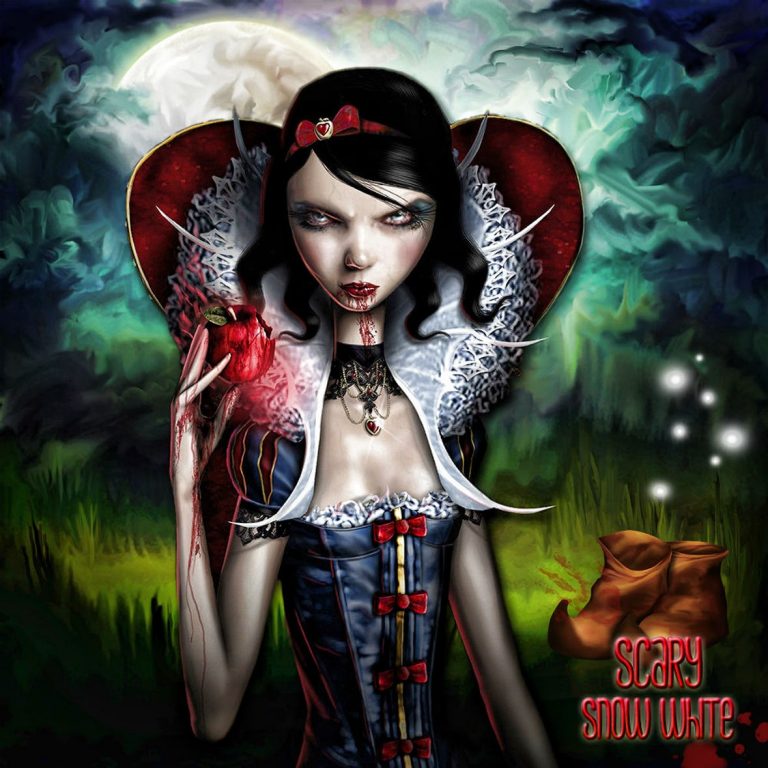 Finally, this monster is actually looking like a monster. He was just too cute to be considered as a monster before. Disney, you should hire this artist. 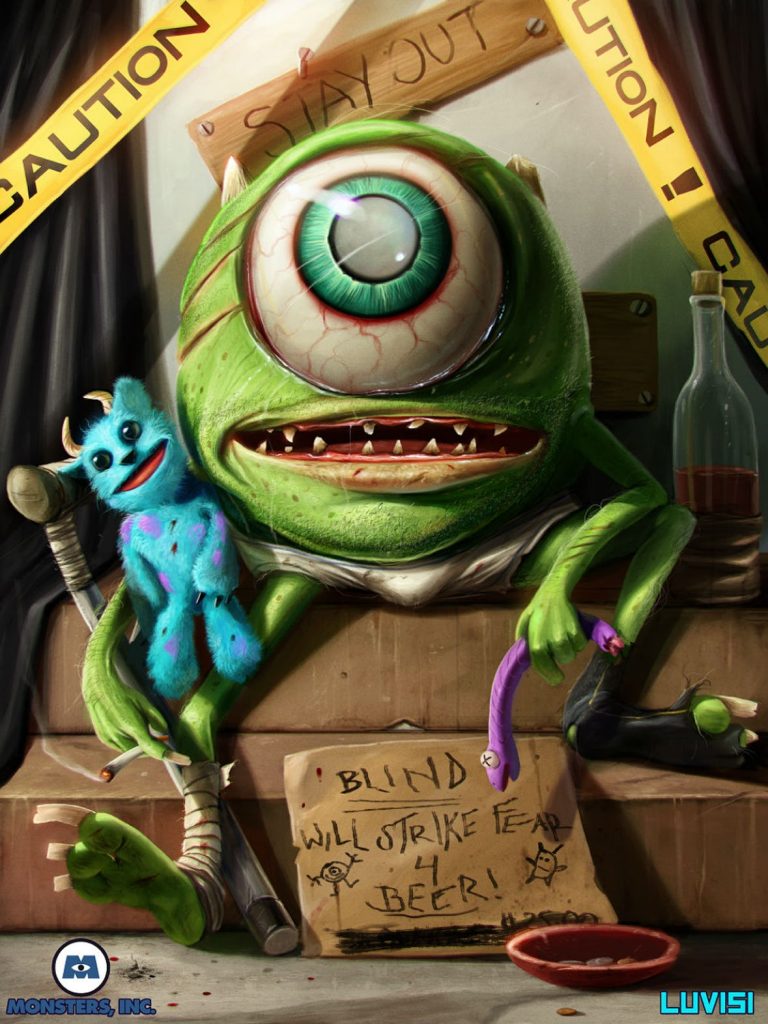 You know what? I am not actually mad at this. It looks cool, honestly. I like the grown up version of these two. Lilo looks like a model here. However, Stitch…he looks buff. It seems like he is spending most of his time in gym now a days. I want a grown up version of diney shows! 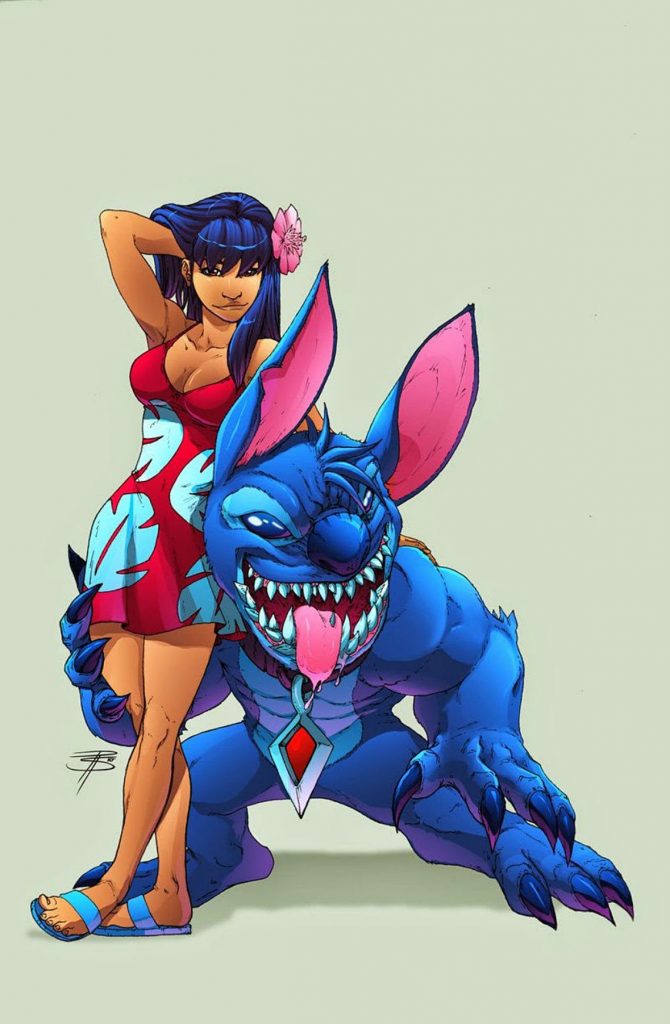 These illustrations were so crazy, the talent speaks for itself, I do not need to explain anything. Although, I can not help but praise these artists and their unique creativity. Who would have thought these extremely cute characters could look like your worst nightmares? Where do these artistic people get such sick and cool ideas from? I am sure their brains are built differently. These artists are great at what they do, no doubt, even though I am not a big fan of creepy art because my poor mind is quick to generate nightmares about such stuff. I have to admit that I am amazed by these art works because it is not an easy job, not every one can do this. Tell us which illustration you found the most creepy in the comments down below…